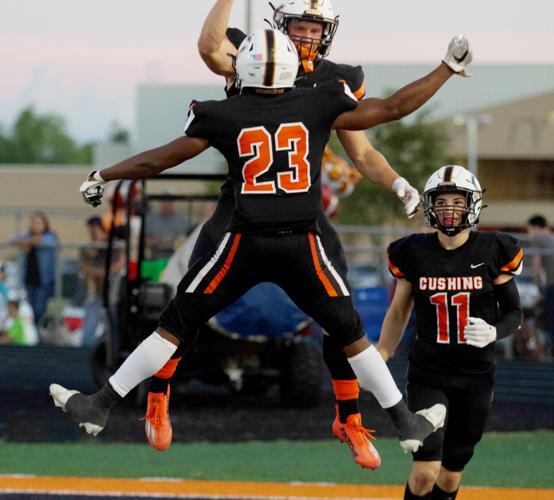 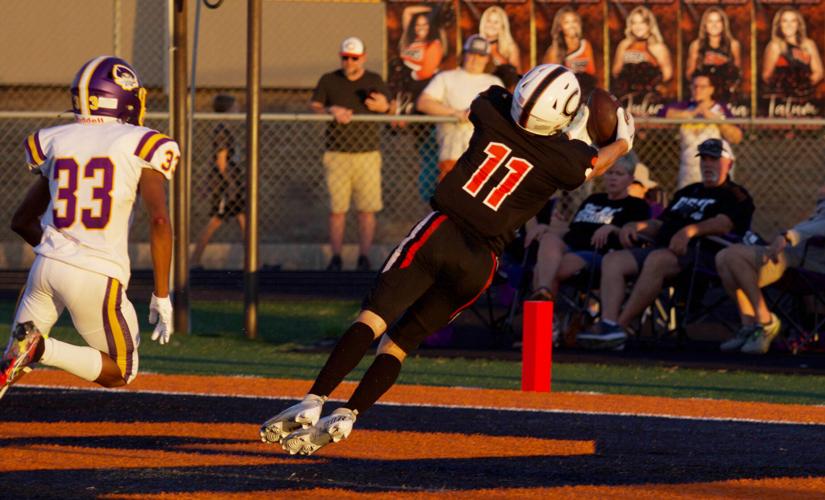 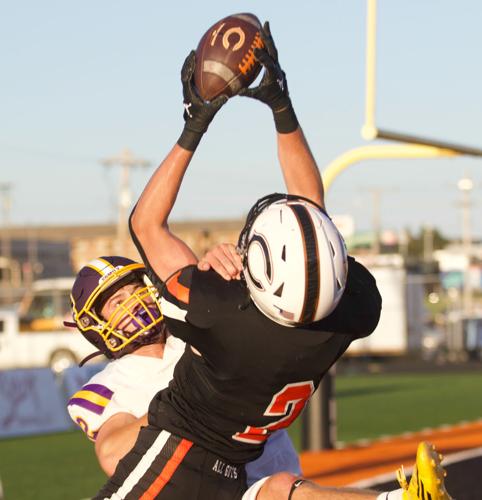 Camden Crooks locked the ball tightly against his chest and began maneuvering his way across the football field.

After slipping through a couple of tackles and utilizing a few blocks on the opening kickoff of the game, the Cushing High senior running back found himself charging towards the end zone, setting the tone early for his team, taking it 74 yards to the house on the first play of the night.

“I was like, ‘I’m going to return this (for a touchdown),’” said Crooks following Cushing’s 63-30 blowout of Bristow. “Once I broke out to the right side, there was no one (near me). Then I saw Noah (Jones) come across and block that guy. I knew I was gone and that no one was going to catch me.”

That game-opening touchdown only foreshadowed the trajectory of Cushing’s game against Bristow.

“Special teams, for as many athletes as we have, that needs to be a big part of our game,” Cushing head coach Rusty Morgan said. “To have that come through that early in the game, on the first play of the season at home, it’s just awesome to use that to set the tone for the evening.”

The rivalry aspect of the game was essentially the most eye-catching pregame piece of Friday night’s matchup between Cushing (1-0) and Bristow (0-2).

Even then, complete and utter dominance outweighed any significance of a rivalry on Friday night to kick off the 2022 campaign in a pummeling of the Pirates.

A quick three-and-out forced by the Cushing defense eliminated any chance of Bristow regaining momentum. This early defensive stand set up a quick three-play drive for quarterback Blaze Berlowitz and the Cushing offense, capitalized by a seven-yard toss to wide receiver Lane Yaunt in the left corner of the end zone to put the Tigers up two possessions early.

“Momentum suits well for us, we play well off of it,” Berlowitz said. “We always like to keep our tempo quick and it usually bodes well for us. I really think we did a good job of that tonight.”

From then on, nothing changed. The opposing stands gradually cleared out as the final outcome became rather inevitable already in the first half of play.

Two Cushing drives later, Berlowitz’s passing abilities once again guided the Tigers to another touchdown. This time, with a 34-yard strike to wide receiver Nate Endicott in one-on-one coverage downfield.

“I just saw (Nate) downfield and knew he would make a play,” Berlowitz said. “I saw he beat his man at the line of scrimmage and was wide open. I think that speaks volumes for who he is as a player and his ability to get open.”

Berlowitz accounted for one more passing touchdown on the night, throwing three total through the air.

However, Berlowitz wasn’t the only driving force in the Tiger offense, as running back Noah Jones assisted in the continuity of the offensive end. The senior rushed for a total of 111 yards on 11 attempts, tallying three touchdowns to give him the hat trick. Jones’ rushing success generated a fair amount of balance, en route to a dominating offensive performance for the Tigers. Berlowitz and Jones combined for six of Cushing’s nine touchdowns on the night.

“It’s excellent to have that type of balance offensively,” Morgan said. “As a coach I love that. I love that they’re all supporting each other and feeding off of each others’ performances.”

The Tiger defense dominated Bristow’s offense, pushing the Pirates to trade reps from quarterbacks Jon Montgomery and Ryder Goodwin, hoping to find a slight ounce of momentum to spark some offensive fluency. Outside of four well-sustained drives, the Pirate offense couldn’t manage to generate any offensive flow. Cushing defensive linemen were in the backfield every other play, making it difficult for either quarterback to find any rhythm.

Bristow was held scoreless until the 4:57 mark in the third quarter, when running back Braxton Estes took an end-around for five yards into the end zone. The provided a positive in what was a nightlong turmoil for the Pirates.

“It was promising to see a defensive performance like this,” Morgan said. “I think it provides our offense a bit of a cushion to play with. Obviously there’s things to clean up but I’m pleased with the play our defense played tonight.”

“Overall, it was just promising to come out with a win like this. Like I said, there are things to clean up, but it’s encouraging to have a performance like this on the first game of the year.”

Cushing will turn its attention to Perkins-Tryon where it will face the Demons on the road at 7 p.m. Friday.