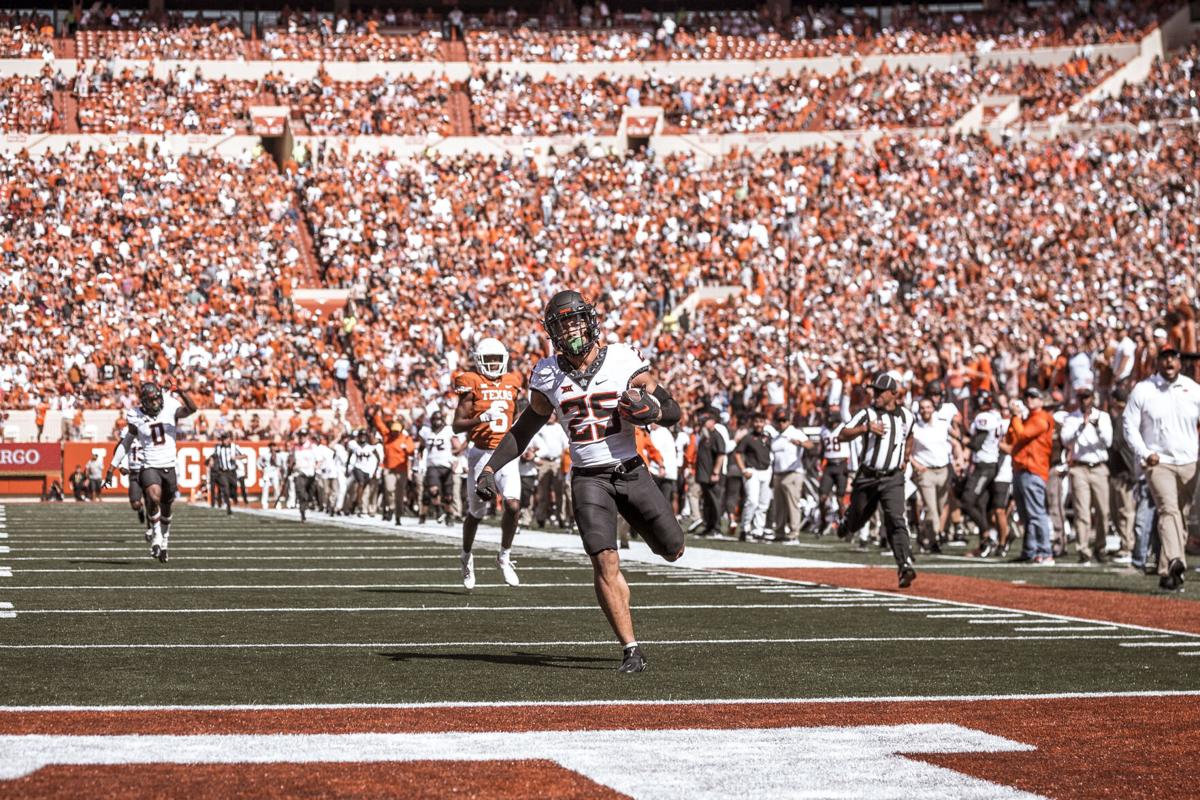 Oklahoma State safety returns an interception for a touchdown during Saturday's game against Texas at DKR Memorial Stadium in Austin, Texas. 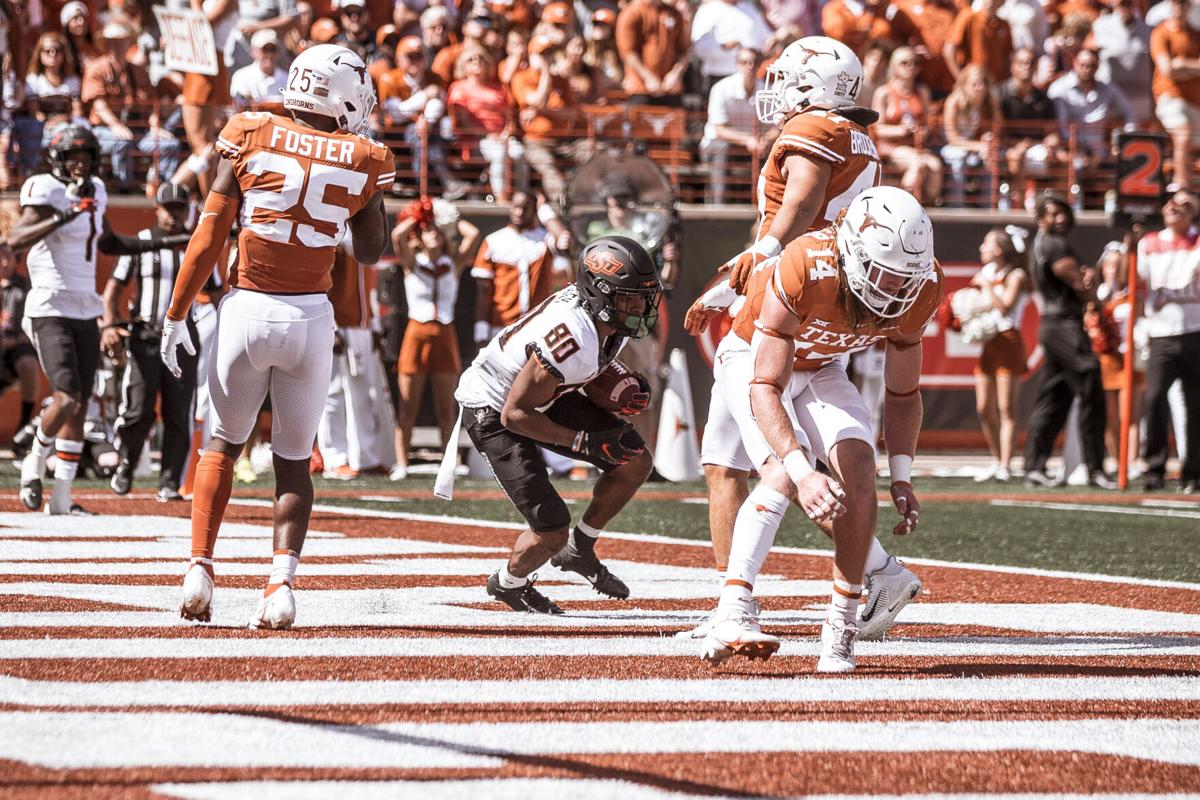 On the brink of losing an undefeated record, the Oklahoma State football team had to find the ingredients for a sudden turnaround against Texas.

Going into the fourth quarter, the Cowboys hadn’t scored one offensive touchdown. The defense had given them a fighting chance with Jason Taylor II’s interception return into the end zone, but Texas rusher Bijan Robinson’s crafty maneuvers proved difficult to contain. OSU was banking on field goals to stay in the game, though they hadn’t been enough to secure a lead.

Then the shift happened.

Everything magically clicked late in the game, and the Cowboys confiscated the momentum from Texas, climbing to a 32-24 victory against the Longhorns on Saturday afternoon in Austin. For the first time in program history, No. 12 OSU has knocked off three AP top-25 opponents in a row, defeating Kansas State and Baylor at home before hitting the road to face Texas.

“This was a really, really good culture win for us as an organization,” coach Mike Gundy said. “We shot ourselves in the foot in the first half, didn’t really give ourselves a chance. The guys rallied back, and coaches came up with really good plans at half; I was proud of them.”

The Cowboys improved to 6-0 overall, a feat they haven’t achieved since 2015. They’re already bowl eligible while holding a 3-0 Big 12 Conference record.

Meanwhile, the Longhorns dropped to 4-3 overall and 2-2 in the conference, experiencing their second straight collapse against a Big 12 foe. Only one week ago, Texas blew a 21-point lead against OU, and the Longhorns couldn’t bounce back against the Cowboys.

Redshirt junior quarterback Spencer Sanders connected with sophomore receiver Brennan Presley for a 7-yard pass in the middle of the end zone, narrowing Texas’ lead to 24-22 with 10:16 left. OSU had finally scored an offensive touchdown, and though Texas linebacker Jaylan Ford thwarted the two-point conversion attempt, wrapping up Jaylen Warren before he could reach the end zone, the Cowboys kept rolling.

OSU’s defense forced another three-and-out as freshman edge rusher Collin Oliver weaved between two Longhorns to charge quarterback Casey Thompson, sacking him for a loss of four yards on third down. The Cowboys maintained their identity as an efficient third-down defense, allowing Texas to convert on only four of 14, and permitted no first downs in the fourth quarter.

“I expect us to stop them every time we’re out there,” defensive coordinator Jim Knowles said. “That’s just how we have to think. It’s a beautiful thing when it comes all together. That’s why we play the game. I expect our guys to rise up in those circumstances.”

With the ball back in their hands after Oliver’s sack, the Cowboys unleashed an inventive playbook. Presley gained 17 yards on a reverse to start the drive. On the next play, Presley obtained the ball and threw it to Sanders. Although the pass fell incomplete at Sanders’ feet, it showed evidence of the Cowboys’ willingness to get creative.

Warren added steam with a 20-yard rush, and the drive ended with Brown’s 29-yard field goal that put OSU up 25-24 for its first lead of the day.

The Cowboys’ ascent nearly took a disastrous downturn when Brown’s botched kickoff set up the Longhorns on their own 35-yardline, but the defense delivered even when Texas started in prime field position. OSU closed up all the gaps, leaving Thompson with nowhere to throw, and Brock Martin – who returned for the first time since leaving the K-State game with a dislocated elbow – disrupted the Longhorns’ fourth-down play, preventing Thompson from gaining any distance on a keeper.

Sanders provided additional support on offense, extending the Cowboys’ lead to 32-24 with his 10-yard touchdown scramble, and senior safety Tanner McCalister sealed the victory when one of Thompson’s passes dropped into his hands, giving the Cowboys possession with 1:57 left.

It was a wild, upside-down ending to a game that started with Texas’ dominance and a sputtering Cowboy offense. The Longhorns scored on their first drive when Robinson wedged into the end zone with a 1-yard rush. Robinson had a dynamic day, recording two rushing touchdowns and one receiving touchdown for a total of 173 yards.

By contrast, the Cowboys’ opening drive ended with a Tom Hutton punt, and the offense remained stagnant through long stretches in the first half. Receivers dropped passes, Sanders threw an interception and penalties added up to send the offense in reverse. Heading into halftime, OSU had 156 yards of offense, while the Longhorns had 225.

The script flipped in the second half. OSU had 242 yards after halftime while limiting Texas to only 92. With leadership from Warren, who never reached the end zone but stockpiled 193 yards on 33 carries, the Cowboys avoided their usual second-half scoring drought. Sanders went 19 for 32 with one passing touchdown and another on the ground.

Even when the offense struggled, defense and special teams kept Texas from running away with the game. Taylor, a redshirt junior safety, cut the Longhorns’ lead to 17-10 with his 85-yard pick six in the second quarter. And Brown was OSU’s leading scorer, recording 15 points on four field goals and three PAT attempts.

The Cowboys will continue their Big 12 schedule with a matchup at Iowa State next Saturday. Offensive coordinator Kasey Dunn recognized they need to continue to work on consistency, but he also saw the Cowboys’ perseverance.

“The first half felt like, typically, a second half,” Dunn said. “So we’re still looking at putting two halves together, but certainly happy to come out with that W. … We were able to close it again.”