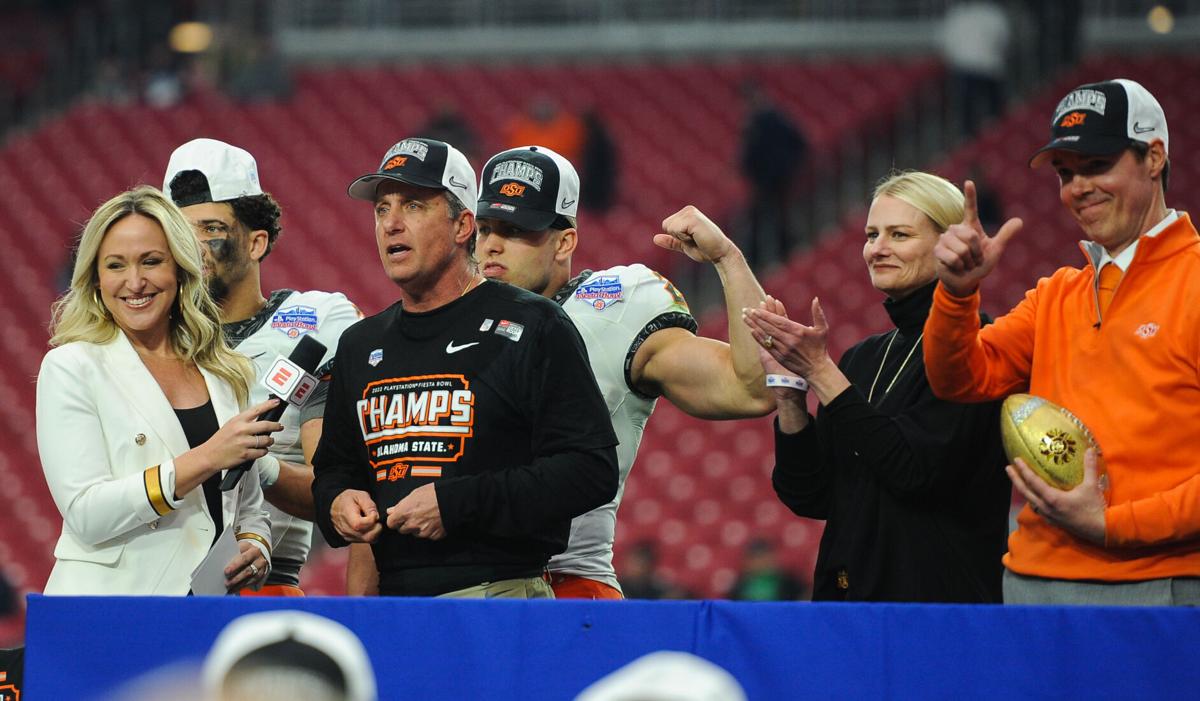 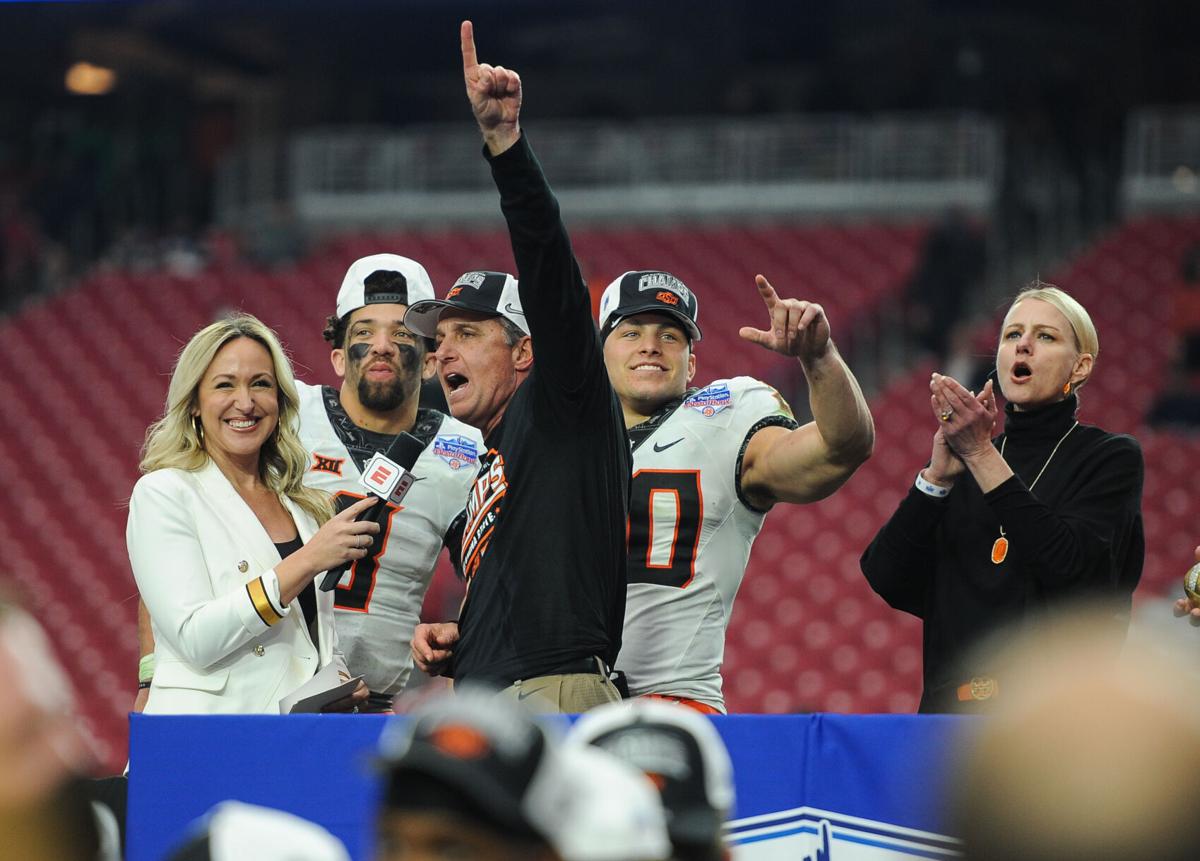 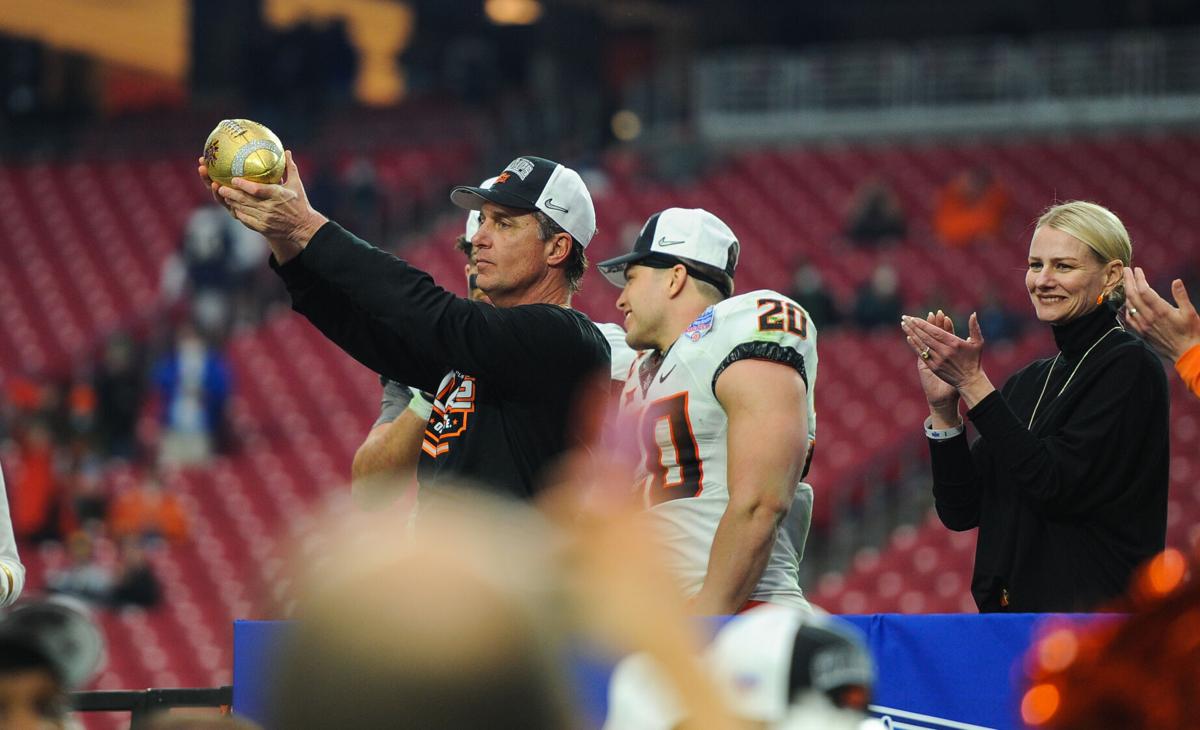 Jason Elmquist/Stillwater News Press Oklahoma State coach Mike Gundy lifts up the gold ball from atop the Fiesta Bowl trophy after the Cowboys won Saturday in Glendale, Arizona, over Notre Dame for the 12th win of the season.

Jason Elmquist/Stillwater News Press Oklahoma State coach Mike Gundy lifts up the gold ball from atop the Fiesta Bowl trophy after the Cowboys won Saturday in Glendale, Arizona, over Notre Dame for the 12th win of the season.

Spencer Sanders and Malcolm Rodriguez took their rightfully earned places on the State Farm Stadium stage with the ornate, golden Fiesta Bowl trophy glimmering in front of them.

Rodriguez, the loyal Oklahoma State linebacker who arrived at a midweek press conference with a gray cowboy hat perched atop his head, had discarded the Western garb for a different accessory: a Fiesta Bowl champions cap. Sanders, the quarterback who had just finished his season with a record-setting redemption story, was wearing one, too.

After the Cowboys toppled Notre Dame 37-35 on Saturday afternoon in Glendale, Arizona, Rodriguez and Sanders each received MVP honors. They stood in the eye of the postgame fanfare, celebrating a marquee victory for a program on the rise.

Of course, coach Mike Gundy was also immersed in the festivities, recovering after a couple of orange Gatorade baths. At least he didn’t have to endure a mayonnaise or Cheez-It dump. Athletic director Chad Weiberg and university president Dr. Kayse Shrum were there, witnessing the grand finale to a season that surprised many. And when everything was over, when the No. 9 Cowboys had left the field, Gundy made a confident statement to put this victory into context during his press conference.

“This is clearly the biggest win in the history of the school.”

It’s a bold declaration, no doubt, but this day will hold a lasting place in OSU football lore. Rallying from a 21-point deficit to spoil a Fiesta Bowl triumph for a tradition-rich, fifth-ranked Notre Dame program exemplifies the Cowboys’ theme this season: surpassing expectations to solidify their status as a nationally relevant program.

Let’s reflect on the beginning of the season. While the Cowboys were preparing for a year without Tylan Wallace and Chuba Hubbard, few people expected them to reach a New Year’s Six bowl and establish themselves in the same tier as the Fighting Irish. At the end of the nonconference slate, the situation still didn’t look too promising. Sure, the Cowboys were 3-0, but every win was a chaotic nail-biter marked with offensive lulls, particularly in the third quarter. Would this team collapse under the pressure of a Big 12 Conference schedule?

The Cowboys (12-2) continued to have a flair for the dramatic, turning their early conference games into fourth-quarter slugfests, but another facet of their identity – which Gundy says he can usually sense by October – took shape. This team had guts, grit and a stunningly stout defense. Even in one midseason loss to Iowa State, the Cowboys held their own.

The two Fiesta Bowl MVPs each made profound, though different, impacts on the season. Rodriguez, the energetic, rough-and-tumble wrestler from Wagoner, ended his super senior year with a myriad of All-America honors, leading the Cowboys with 123 tackles.

Sanders, the redshirt junior signal-caller from Denton, Texas, showed growth in the face of adversity. He was self-critical and introspective, allowing himself to learn from mistakes at the end of his roller-coaster season and lead the offense with poise against a Notre Dame defense also ranked in the top 10 in the country.

Of course, the Big 12 title game was a blemish on the season, a downer as the Cowboys lost their hopes of making history with a College Football Playoff appearance. But simply advancing to the conference championship game for the first time brought the program to new heights, and defeating Notre Dame (11-2) with the largest comeback in OSU history continued that rise.

If the Fighting Irish had crushed the Cowboys, people might have viewed the entire season differently.

“We felt like if we didn’t win this game, this would have been kind of a season of just forgotten greatness,” said Brock Martin, OSU’s starting edge rusher.

Instead, the Cowboys have plenty to remember.

He stockpiled 371 passing yards for four touchdowns (including three to super senior Tay Martin), ending his season with a performance bearing few similarities to his four-interception conference championship game against Baylor.

After a sluggish first half for the offense, Sanders picked up the pace in the second, distributing the ball to multiple receivers and fueling the Cowboys’ comeback against the Irish.

He also accumulated a game-high 125 rushing yards, fitting the definition of a dual-threat quarterback.

“I think he took control of the situation,” offensive coordinator Kasey Dunn said.

Rodriguez did the same on defense. True to his usual form, he led all defenders with 11 tackles and put a bow on his stellar career with a fourth-quarter interception. He and fellow super senior Devin Harper maintained their status as a dynamic linebacker duo – Harper racked up 10 stops.

Tight end Michael Mayer used his size to beat Cowboy defenders on touchdown routes. Young running backs Logan Diggs and Chris Tyree provided offensive energy without leading rusher Kyren Williams, who opted out of the game for the NFL Draft. But the Cowboys relied on the tough, prove-the-doubters-wrong identity that had carried them through this season.

Notre Dame had opened as a narrow favorite in sportsbooks. College GameDay pickers chose the Irish, and so did Chutti, a rhinoceros at the Phoenix Zoo, who tattered a box featuring the Notre Dame logo while the OSU box lay abandoned in the mud.

The Cowboys proved that dang rhino wrong – sorry, Chutti, no hard feelings – to show that they belong in conversations about premier college football programs.

The Fiesta Bowl trophy can represent what OSU has accomplished, but more importantly, it hints at what the program could become. The Cowboys have potential to emerge as a perennial top-10 contender, and this bowl game, the “biggest win in the history of the school,” illustrated their abilities to stand up against powerhouses.

After the victory, as the celebration unfolded in State Farm Stadium, Gundy spoke in a TV interview. Leading up to the game, he had emphasized the importance of the Notre Dame logo, the history, the unique traditions and the meaning of the Cowboys’ matchup against the team with iconic gold helmets.

“We want everybody in the country to know, with all due respect, we got a logo, too,” he said.

As Sanders and Rodriguez accepted their MVP awards while donning caps that featured the school’s vivid orange insignia, people across the nation knew.

Hallie Hart is a sports reporter with The Stillwater News Press. She can be contacted at hhart@stwnewspress.com.