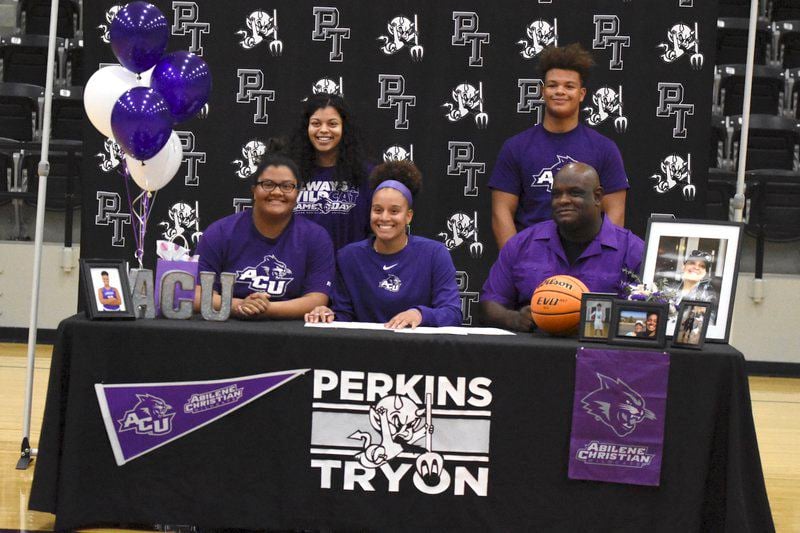 Jimmy Gillispie/Stillwater News Press Perkins-Tryon High senior Alice Stevenson, seated center, signed her National Letter of Intent to play basketball at Abilene Christian University with her family by her side in November. 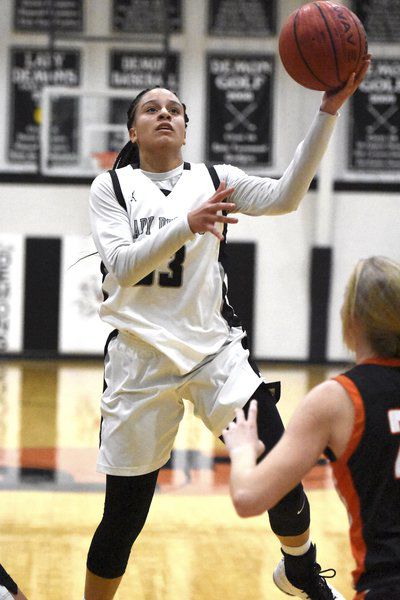 Jimmy Gillispie/Stillwater News Press Perkins-Tryon High senior Alice Stevenson, seated center, signed her National Letter of Intent to play basketball at Abilene Christian University with her family by her side in November.

Alice Stevenson endured a difficult senior season at Perkins-Tryon, but that never swayed her ability to keep competing.

The 5-foot-11 forward battled through recovering from heart surgery before her final season as a Lady Demon began before suffering a severe ankle sprain late in the year – all while trying to lead the P-T girls’ basketball team.

Her last year of prep basketball didn’t go as planned, but her determination never wavered.

“She had a tough year this year,” P-T girls’ basketball coach Jerry Burnett said. “Her mom passed away last year and then before the season started, she had a pacemaker put in. She had a tough year. She fought a lot of adversity. She also had a bad ankle sprain toward the end of the year, but she came to practice every day and played hard, and played hard in the games.

“She’s going to be hard to replace. We’re going to miss her, but we wish her nothing but the best. We’ll be pulling for her the next four years in college.”

She still averaged 12.1 points and 7.3 rebounds per game this year. Stevenson surpassed the 1,000-point mark for her career, ending with 1,236 points. She was named to the All-Tournament teams at Bethel, Noble and Jones.

Stevenson was also named the Most Valuable Player of the Tulsa 7 Conference. She helped the Lady Demons to a 19-7 record.

For her success on the court, Stevenson was chosen as the 2020 News Press All-Area Girls’ Basketball Player of the Year.

“She’s a tough girl and that’s a tribute to her mom and dad, and her upbringing,” Burnett said. “That’s just the type of girl she is. She’s going to give you her best every night. That’s just what you do.”

Stevenson’s tough year began in late August when she had surgery to have a pacemaker placed in her chest. It was needed to correct her abnormal heart rhythms.

She had that surgery Aug. 28. Although the basketball season was three months away, Stevenson’s road to recovery would be at least that long.

She eventually worked herself back into shape to begin practicing, but she missed the team’s preseason scrimmages. But, nothing more.

“She didn’t miss any games,” Burnett said. “I think it slowed her down, and if anything, mentally, it kind of scared her a bit, rightfully so. It would have scared me, too.”

Stevenson agreed with her coach.

“It was mentally challenging, just because I was out for two months,” Stevenson said. “Not being able to run or work out or do anything, I was gaining weight and I didn’t know how to deal with that, because there’s never a day in my life that I wasn’t working out or being active. In that time, I had to chill and sit or only walk. It was making me eager to get out there and play.

Stevenson helped the Lady Demons begin the season 5-0 before falling in the Bethel Tournament championship game. Yet, those first few weeks were rough on the P-T senior.

“My first couple of practices were do what you can do and if you have to sit out, let us know, and if not, then just try to go as hard as you can but take it a little easy,” Stevenson said.

“It was super challenging, because I’m the type of person that if something hurts, I usually don’t tell anybody. I’l just try to push through it. But, in that situation, if I was hurting, I had to sit out or I had to tell somebody, because it could have messed up things in the future. So, it was pretty challenging. I had to be, I guess a little soft with myself during that recovery time.”

Of course, trying to get back in shape and improve her conditioning also came with mental hurdles after her surgery. That was another obstacle for her to overcome.

After winter break, Stevenson began to feel like herself again, helping the Lady Demons win eight of nine games. They dropped the Noble Tournament title game during that stretch.

However, two weeks later, they placed third at the Jones Tournament. It was a moment Stevenson won’t forget.

The final month of the season was again a struggle for Stevenson. She suffered a severe ankle sprain and sat out a few games to let it recover.

It just never fully recovered, forcing her with a tough decision.

Stevenson chose to keep playing, knowing she wasn’t at full strength. It was a grind, and P-T lost four of its last eight games, including two regional games to end the season.

“That was super tough, because you can only push yourself so far,” Stevenson said. “With the ankle injury, you’re not able to move how you normally would move, and your team is looking up to you and counting on you to do what you normally do, but you’re not able to no matter how hard you want to. I had to continually remind the girls I need them to step up and help me also, because as much as I’m trying, it’s just not working and it’s not going for me. They understood and most of the time, they stepped up and helped me.”

Burnett said they iced her ankle after every game, and Stevenson battled through all of it without complaining about the physical demands on the court.

“It was hard on her,” Burnett said. “They would double team her, and when she caught it on the inside, they would try to slam down on her and try to triple team her. With her ankle late in the year, it was a struggle for her to move. But, she never complained. You could see on her face that it was hurting.”

Learning to play through difficult times is nothing new for Stevenson. Her mother, Jennifer, passed away Feb. 19, 2019, near the end of Stevenson’s junior season, after a long battle with a rare form of cancer.

This year’s battles were just another test for Stevenson. She kept a positive attitude throughout the entire process.

“There was a lot of growing up I had to do,” Stevenson said. “Knowing that I have to continually push myself every day in practice, because sometimes the opponents we’d be playing we’re going to be the best players I’d be playing against in the next couple of years. So, I had to mentally get ready for college through high school basketball my last year. Coach Burnett helped me to do that by pushing me and making sure I was always going 100 percent.”

Stevenson’s mother had a hunch that came true shortly after she passed away. Her daughter committed and later signed to play basketball at Abilene Christian University.

She signed a couple weeks before the season began, which helped relieve a bit of the stress she was feeling. Stevenson plans to move to ACU in late June, unless she’s forced to push that date back due to the coronavirus pandemic that has shut down school campuses across the country for the time being.

“I’m super excited,” Stevenson said. “Our coaches have been sending us workouts that we have to do for this month and the next two months until we move down there. I love to work out, so it’s getting me more excited. We’re having team meetings and interactions with the girls.

Burnett said he can’t wait to watch her play college basketball, and continue to be an excellent student in the classroom.