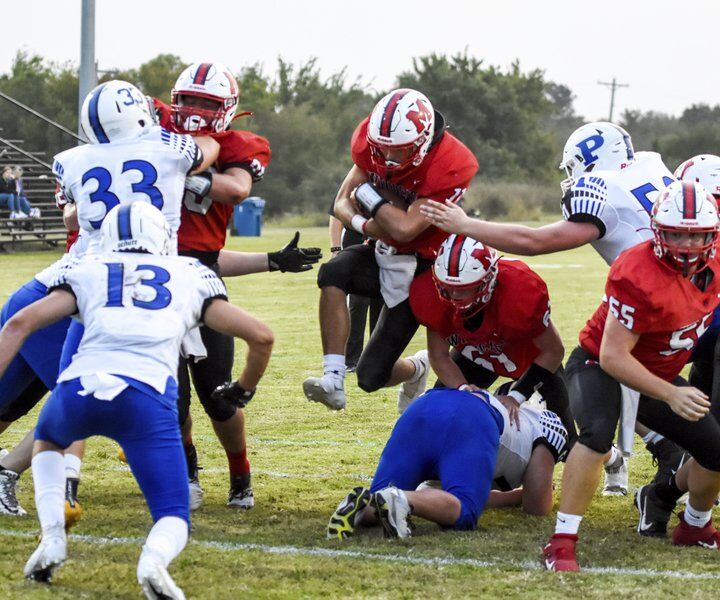 Jason Elmquist/Stillwater News Press Morrison High running back Tyler Voss (11) leads over a pile into the end zone during Friday's game against Porter. 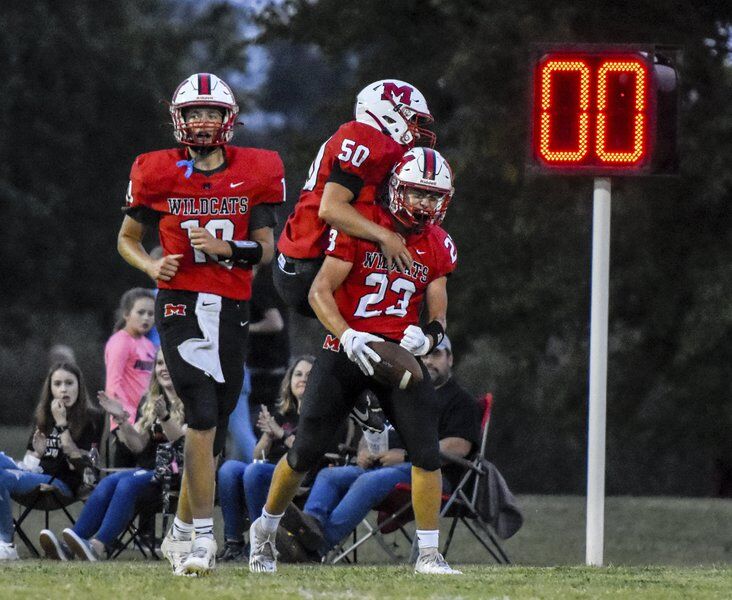 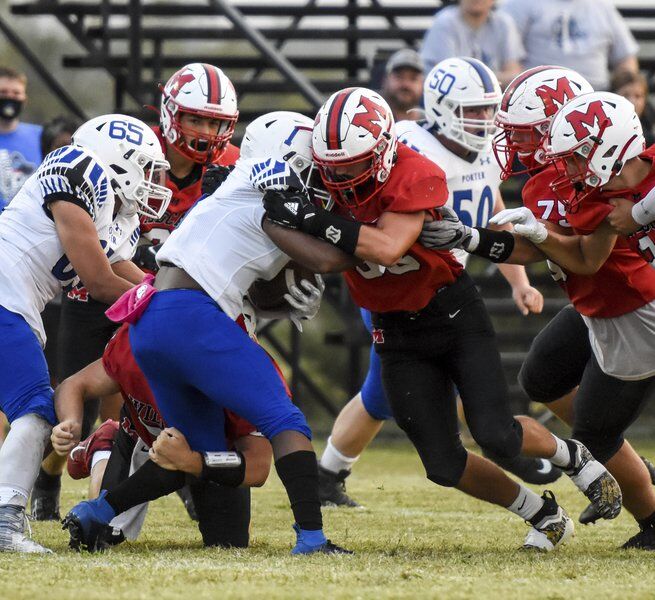 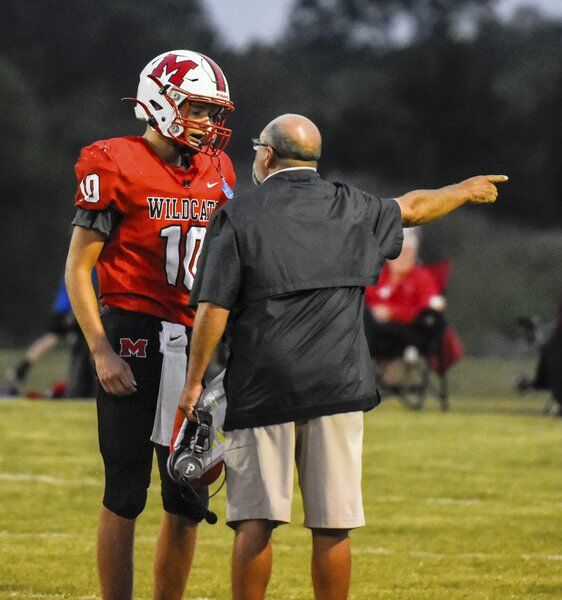 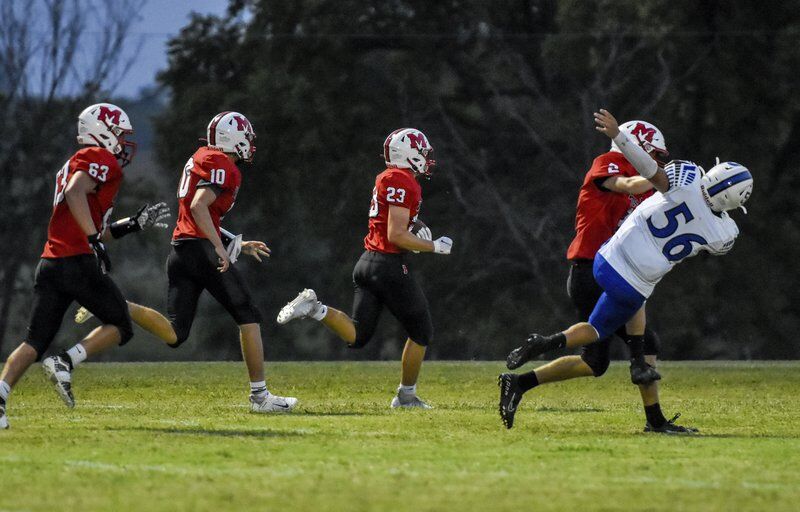 Jason Elmquist/Stillwater News Press Morrison High linebacker Eli Johnson (23) gets an entourage returning an interception for a touchdown during Friday's game against Porter. 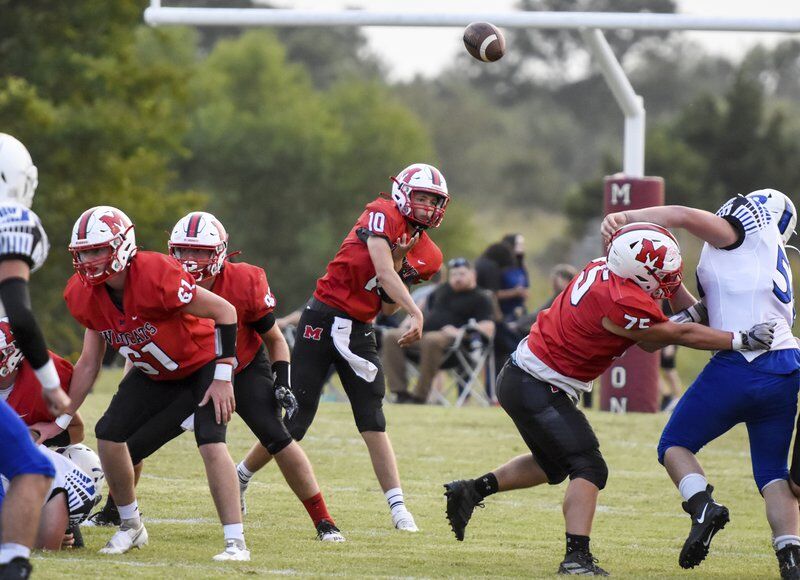 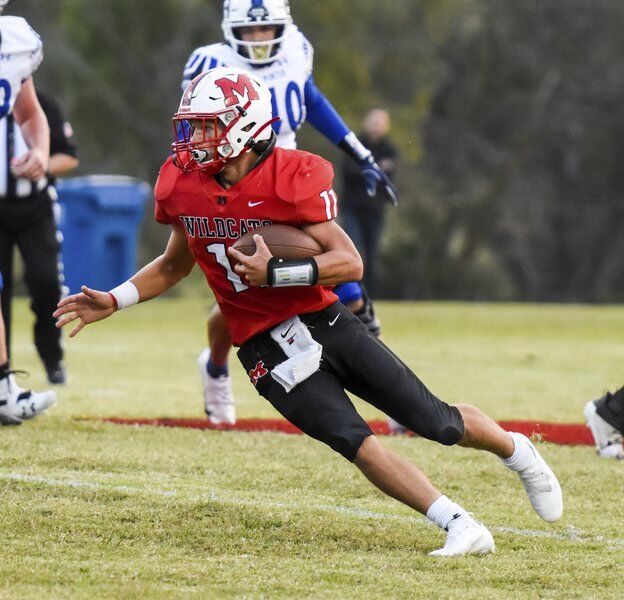 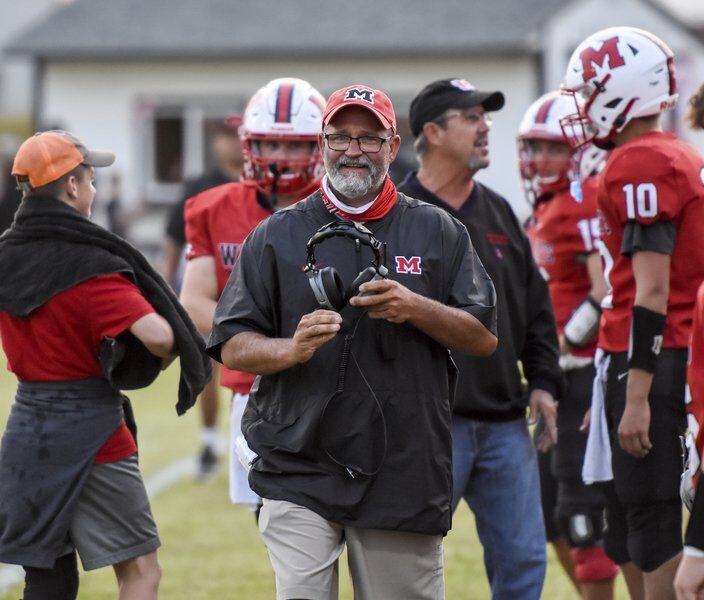 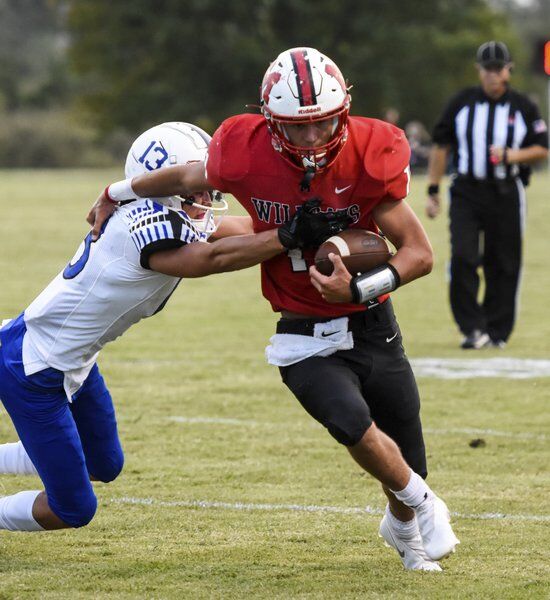 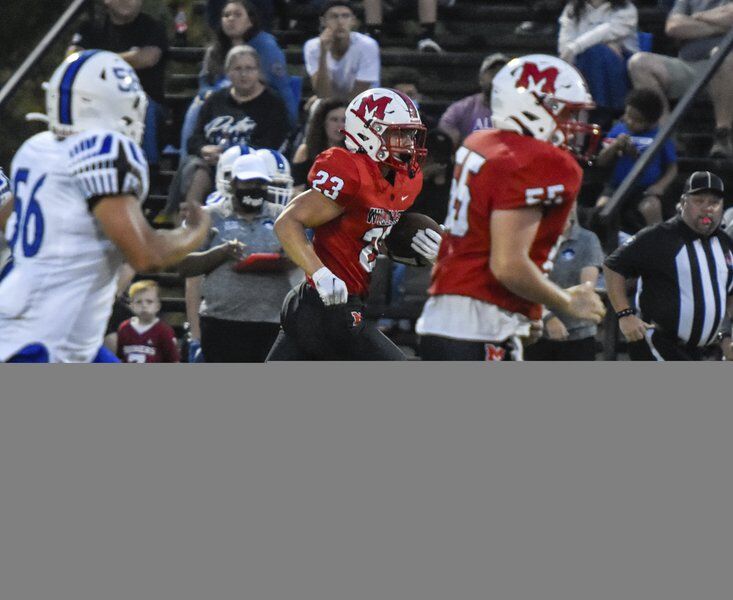 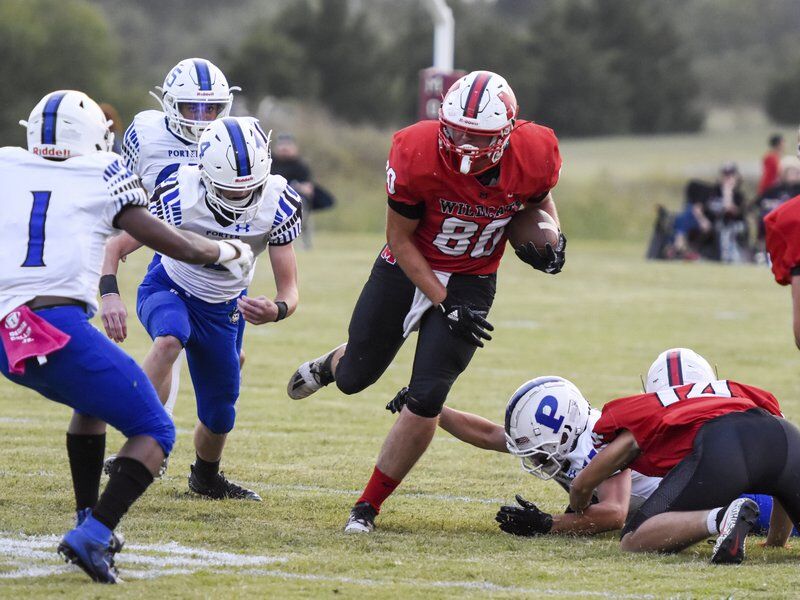 Jason Elmquist/Stillwater News Press Morrison High running back Tyler Voss (11) leads over a pile into the end zone during Friday's game against Porter.

Jason Elmquist/Stillwater News Press Morrison High linebacker Eli Johnson (23) gets an entourage returning an interception for a touchdown during Friday's game against Porter.

MORRISON – Early in the week, Cory Bales was looking for a homecoming opponent for Friday night.

“I wish we could have given our young kids some playing time at the end, because they haven’t got to play a JV game yet, either,” Bales said. “We’ll get better and we’ll keep plugging along.”

Morrison controlled most of the contest Friday night, never trailing after taking a comfortable first half lead. Porter’s only touchdown came on the opening possession of the second half.

The Pirates drove 69 yards in seven plays. Pirates’ quarterback Bo Tramel accounted for 63 of those yards on the ground. Tramel connected with Caden Willard for the 10-yard touchdown pass.

Tramel finished the game 6 of 16 for 96 yards with one touchdown and two interceptions. He rushed for 85 yards on 11 carries.

“Defensive end play needs fixed,” Bales said. “The quarterback got outside of us all night long against every defensive end we had in there tonight. Those are things we’ll really focus on.”

Although Morrison struggled slowing down Tramel’s rushing attack, it’s ground game was tough stop throughout the contest. The Wildcats rushed for 241 yards while quarterback Jared Harmon threw for 135 more on 9 of 16 completions. Tyler Voss led the way with 158 yards on 24 carries. Harmon added 80 rushing yards to the total.

“We’re going to have to be able to throw the ball, because people will load the box and stop the run,” Bales said. “We’ve got to be able to keep people honest and throw it. Jared threw some good balls tonight, so that was good to see.”

It was the rushing attack that answered the call on the ensuing drive after Porter’s touchdown. The Wildcats took advantage of good field position after the kickoff sailed out of bounds, and marched 58 yards in eight plays.

The lone pass on the drive was a 17-yard throw from Harmon to Gage Williams. Two Voss runs – for 25 yards – later, and the Wildcats were back up three scores. Voss powered in from 10 yards out on the touchdown.

The Wildcats’ defense stopped a pair of fourth down attempts and forced a punt during the remainder of the game. The MHS offense was driving when it lost a fumble. It was the team’s fourth fumble of the night, but the only one lost. The final drive ended in the red zone with the final seconds ticking away after a kneel down.

“We did a pretty good job of run blocking,” Bales said. “We turned the ball over again tonight. I was really hoping we could get our young kids in there and play, but we just didn’t get that accomplished. We should have, but we didn’t.”

It was an interception return for a score that turned the tide of the first half. With Morrison leading 8-0, Porter began the ensuing drive at its own 10-yard line. The Pirates were marching – thanks to a 48-yard pass that was one tackle away from becoming a touchdown – until Tramel threw his second interception of the game.

The Pirates faced a third-down-and-20 after Morrison junior Harlee Goldman sacked Tramel for a nine-yard loss. On third down, Tramel threw toward an inside receiver running a slant route, but the Wildcat defender covering the play deflected the ball into the air.

Johnson was nearby and intercepted the pass at the Wildcats’ 27-yard line. He took off down the Porter sideline, and thanks to a couple timely blocks – one big one on Tramel – and raced into the end zone. The play gave Morrison a 14-0 lead midway through the second quarter.

“That was a really big play,” Bales said. “I thought Eli had a really good game tonight – not just the pick six, but at the linebacker spot I thought he came up and tackled well. That play definitely got things going and opened it up a bit.”

The Wildcats added one more touchdown late in the half. Following an interception by Harmon, the Wildcat defense forced a three-and-out, taking over after a punt at the Porter 45-yard line.

Four plays later, Harmon found Johnson on a deep post route for a 26-yard touchdown pass. The score put Morrison up 20-0 at halftime.

Morrison’s first touchdown came on its second drive of the game. MHS marched 71 yards in 11 plays and survived its second fumble of the first quarter.

The big play of the half was a fourth-down-and-2 run by Voss for 11 yards. On the next play, Harmon found Williams for a 21-yard pass. Voss scored three plays later on a one-yard run, giving Morrison an early 8-0 lead.

Morrison will host Tonkawa for a nondistrict game next week as part of a four-game homestand.

“We’ll get ready to go, because we’re getting ready to get in the meat of our schedule,” Bales said. “We’ve got to get a few more things fixed and get a little more consistent with some things.”