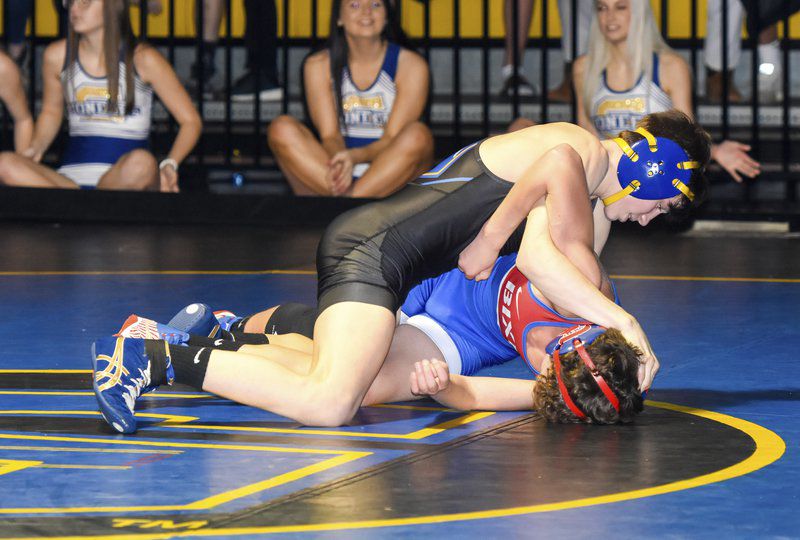 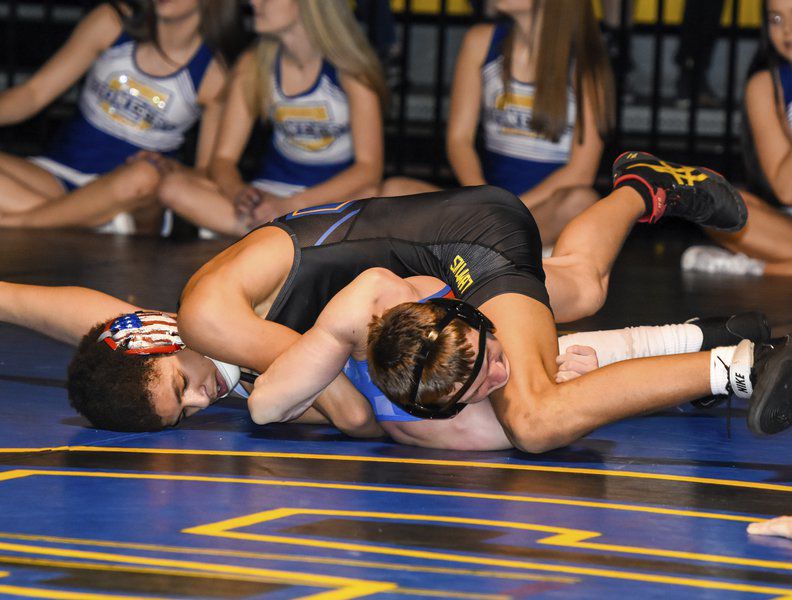 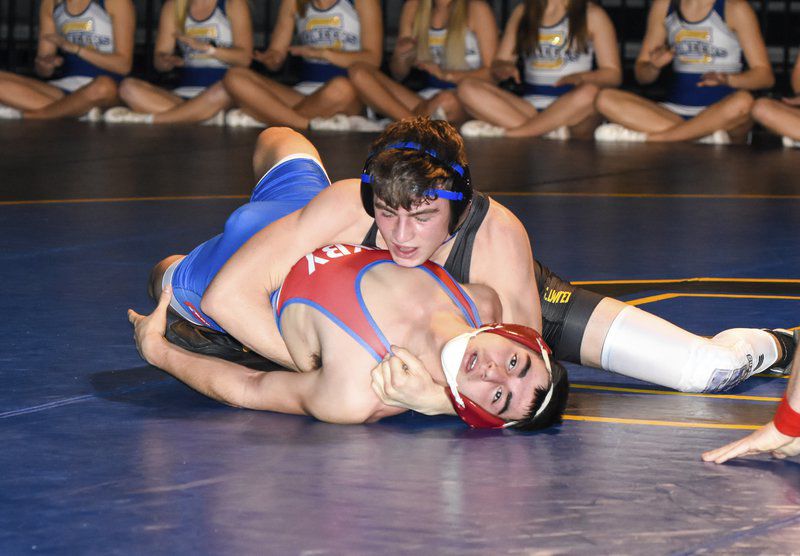 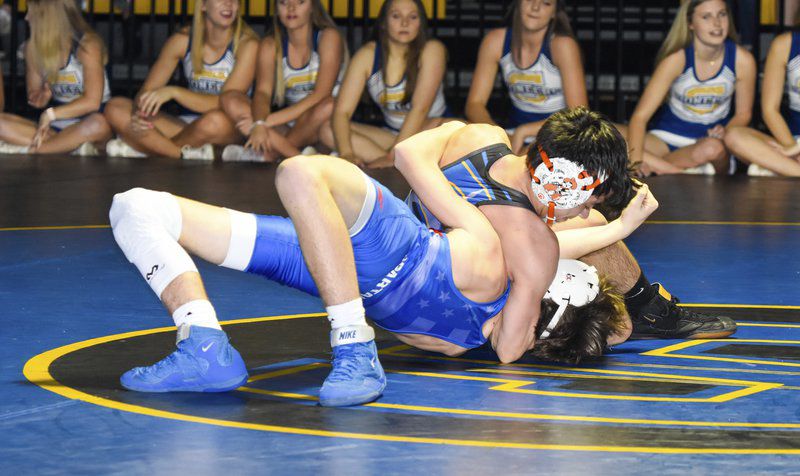 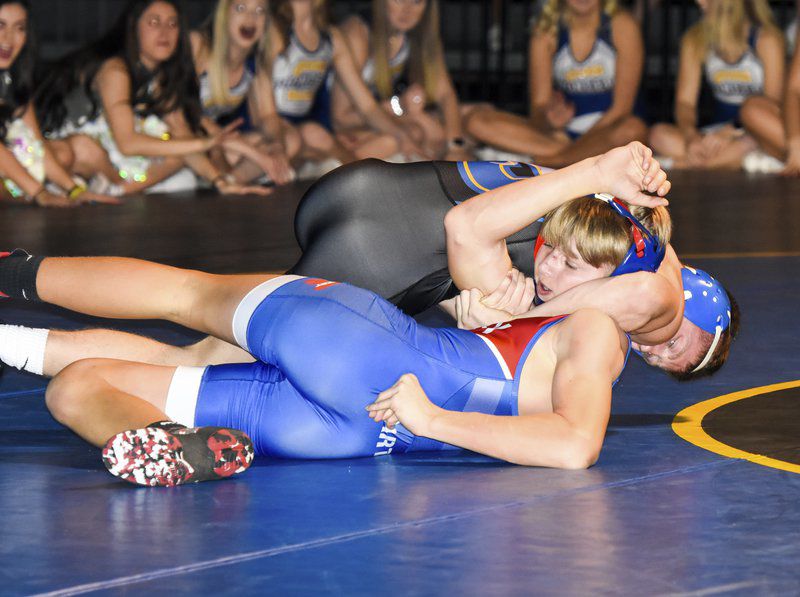 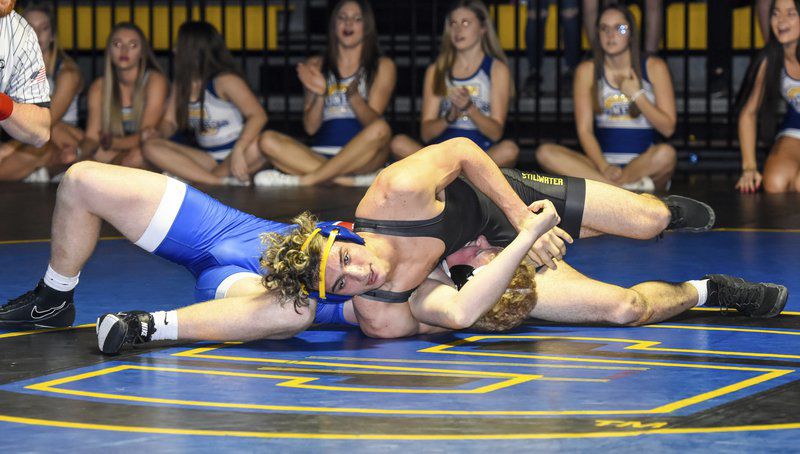 Stillwater High blitzed Bixby from the opening whistle Tuesday before the Spartans could even realize what was going on.

In nearly five minutes of mat time in the opening three matches, the Pioneers had amassed an 18-point lead and never let off the gas – backed by nine falls – on their way to a 59-13 district dual win to improve to 2-0 in district – with just one district opponent left on the schedule.

“They came out like a bat out of hell and just started thumping on them,” SHS wrestling coach Doug Chesbro said. “When you get that big of a lead that early in a match, it’s hard for the other team. Bixby didn’t get time to catch their breath.”

Stillwater freshman phenom at 106 pounds, Cael Hughes, delivered the biggest blow before most wrestlers had settled to their seats following introductions.

Hughes, who is fresh off a Geary Tournament title over the weekend, needed just 14 seconds to pin Colby Holladay – and the rout was on.

Gabe Fontanez would follow with a fall of Cody Kaiser in 1 minute, 10 seconds at 113 pounds, while freshman Cameron Johnson – who didn’t wrestle during the fall semester – pinned David Newberry just before the end of the second period at 120 pounds.

Stillwater faced its toughest tests of the night right after that quick start, though, with Cade Nicholas working his way to a 15-7 major decision – which was made closer by a last-second takedown by Bixby’s Christian Kaiser – at 126 pounds.

A matchup between a state champion and state runner-up from last year awaited at 138 pounds.

Stillwater’s Carter Young – who took silver at 126 pounds in 2019 – and Bixby’s Zach Blankenship, the reigning state champion at 120 pounds in Class 6A, battled to a 6-1 decision with Young coming away with the victory.

“That was a barnburner, and it was the last time they wrestled in the Perry finals,” Chesbro said. “(Blankenship) has been down at 126 since they wrestled last time, and it kind of shocked me them putting him up. … Maybe they tried to get a good match out there for him.”

Bixby picked up his first win of the night at 138 pounds with Stillwater’s Hunter Tackett – who only has “about six matches under his belt in his whole life” – losing by fall in the first period.

But the Pioneers responded with four-straight falls.

Dax Hughes collected a second-period pin at 145 pounds, while Tanner Robinson (152 pounds) and Isaac Wilson (160) didn’t even use near an entire period to pick up their pins.

“We knew that Josh Norris was going to be in our lineup this year, we just didn’t know when and we didn’t know at what weight,” Chesbro said. “He had to gain about five pounds today to be able to even wrestle at that weight class … he had to be above 154 to be able to wrestle at 170, so he had to do the opposite of what kids usually have to do. But it paid off.”

Eli Wilson at 195 pounds earned a 9-1 major decision for the Pioneers, which was flanked by a pair of Bixby victories – a 10-8 loss for Stillwater’s Brett Black at 182 pounds, and Carson Cottrill (220) losing by 12-2 major decision.

But Stillwater closed out the night the same way they opened it.

Jakobe Sanders threw around Bixby’s Brady Neasby – who muttered about trying to go against somebody who weighs 300 pounds as he stormed off the mat – and picked up a pin in just over a minute at heavyweight.

“I’ve been waiting for two years for Jakobe Sanders to be on this wrestling team,” Chesbro said. “Last year, he was out because of an injury from the end of the year before. I knew it was just a matter of time before he was in our lineup. … If he’s wrestling a kid anywhere close to his skill level, he’s going to do exactly that.”

The Pioneers will return to the mat Thursday when they host Ponca City.