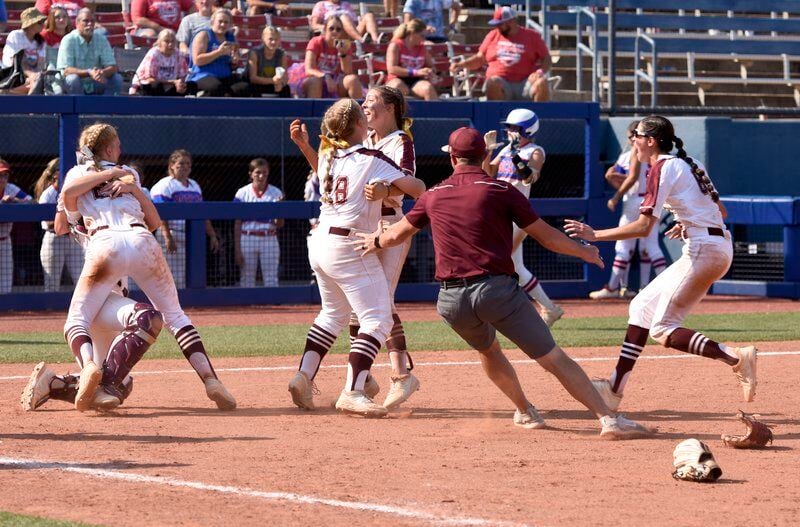 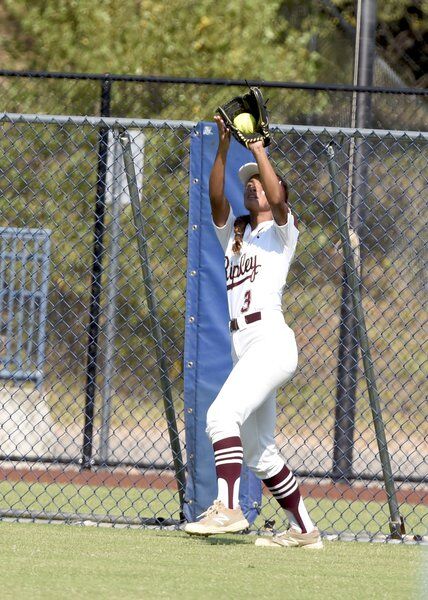 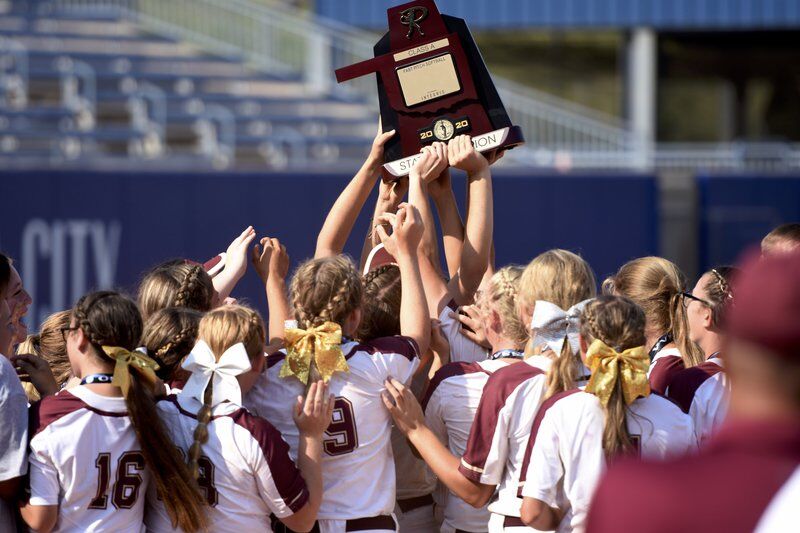 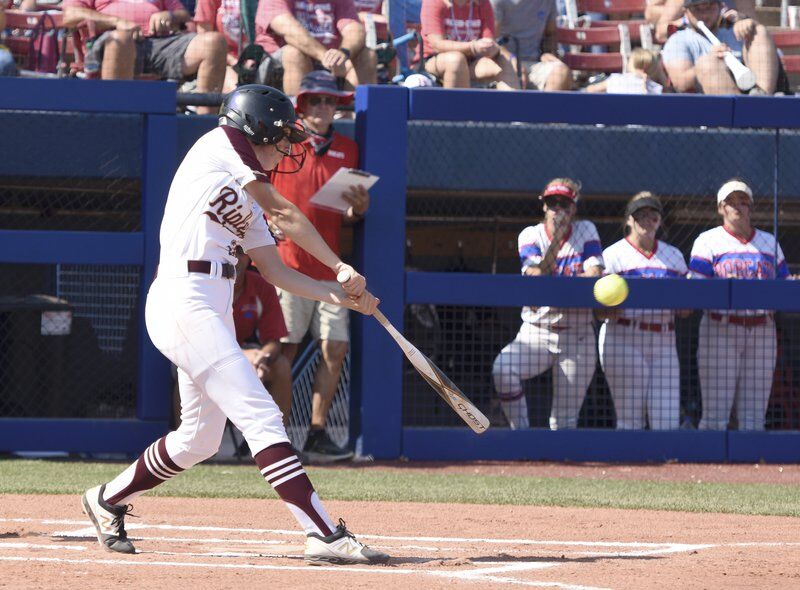 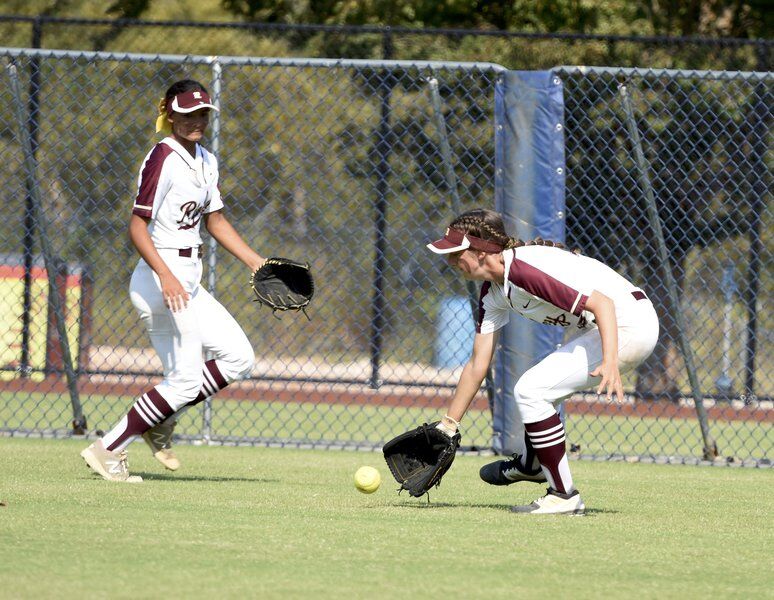 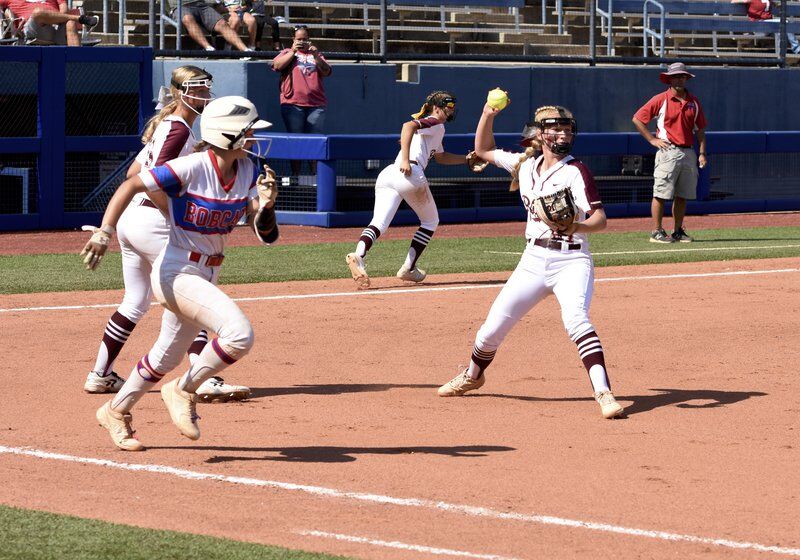 Jimmy Gillispie/Stillwater News Press Ripley High sophomore pitcher Brooklyn Gobble throws toward first base after fielding a sacrifice bunt in the inning of the Class A fast-pitch state championship Saturday at the USA Softball Hall of Fame Complex in Oklahoma City. 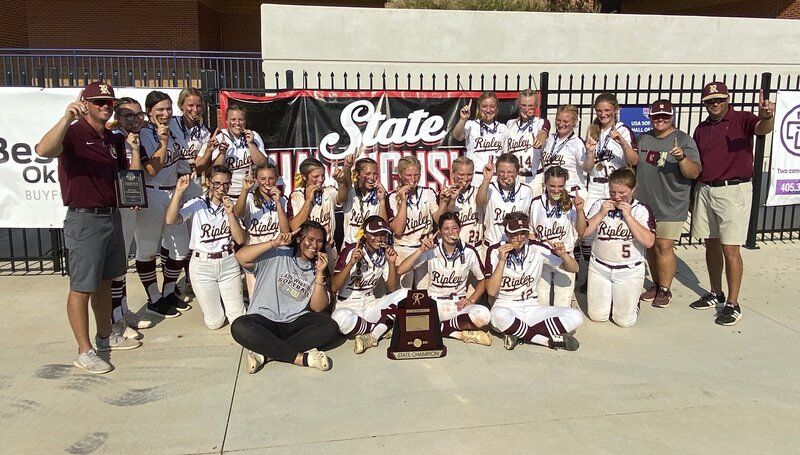 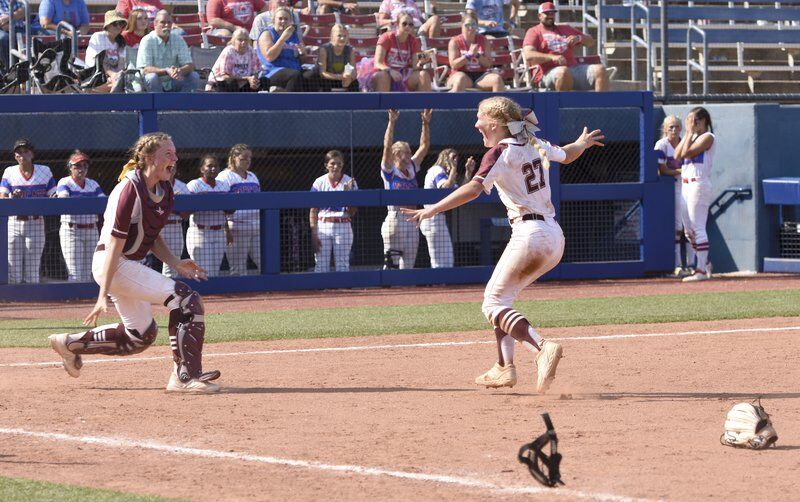 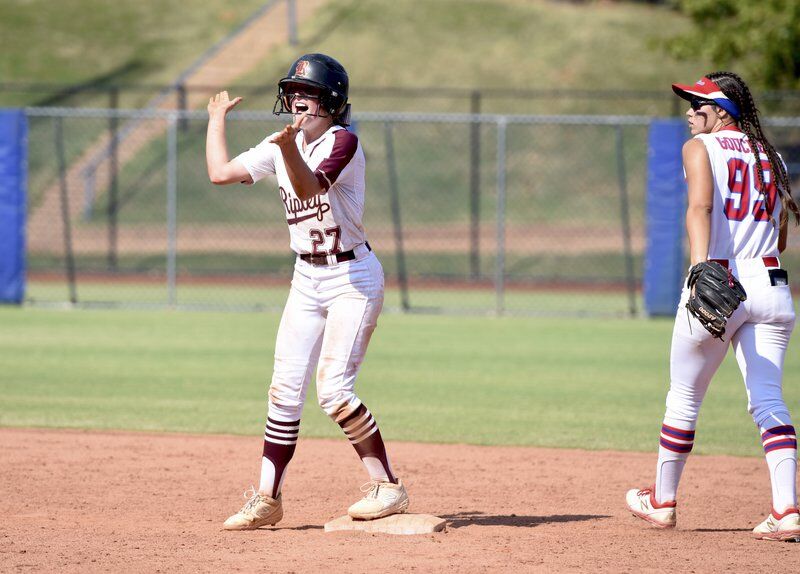 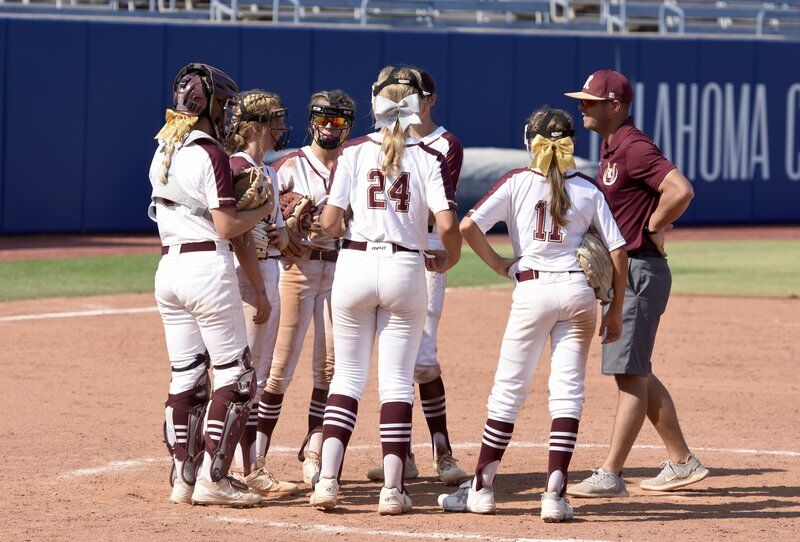 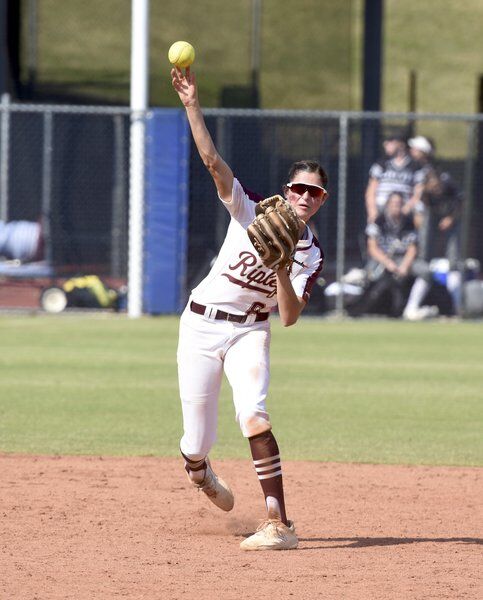 Jimmy Gillispie/Stillwater News Press Ripley High senior shortstop Carlee Mollet throws to first base for a routine out during the Class A fast-pitch state championship Saturday at the USA Softball Hall of Fame Complex in Oklahoma City. 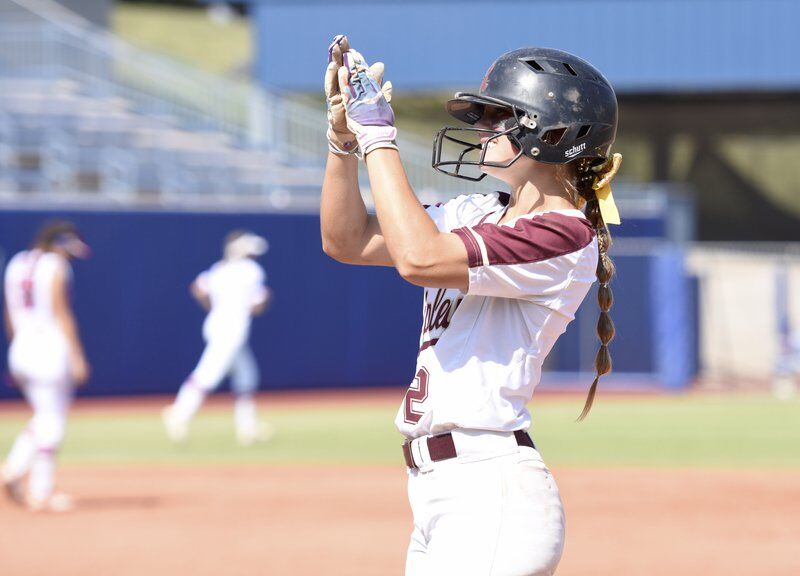 Jimmy Gillispie/Stillwater News Press Ripley High junior Kelsie McCollom celebrates hitting an RBI and reaching first base on an error during the Class A fast-pitch state championship Saturday at the USA Softball Hall of Fame Complex in Oklahoma City. 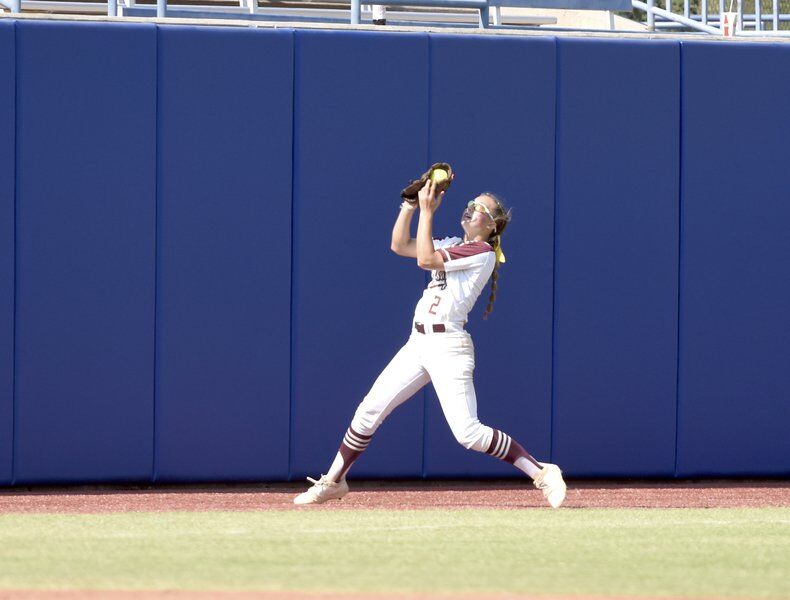 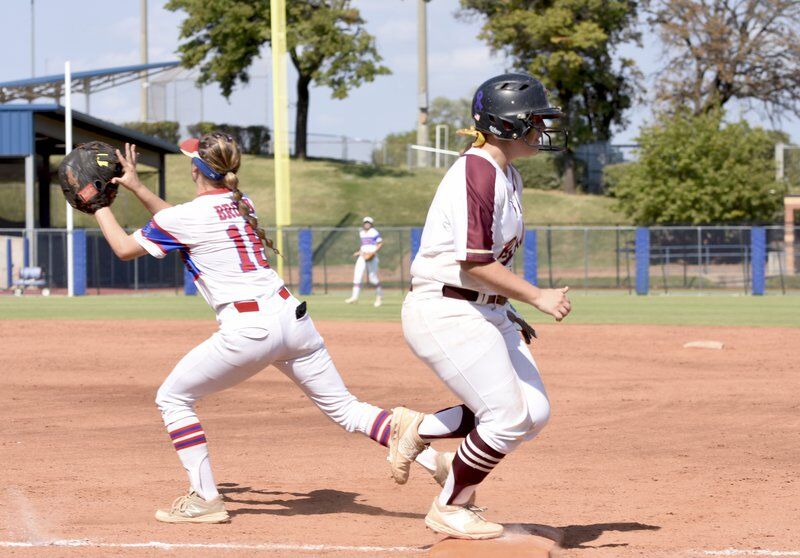 Jimmy Gillispie/Stillwater News Press Ripley High sophomore pitcher Brooklyn Gobble throws toward first base after fielding a sacrifice bunt in the inning of the Class A fast-pitch state championship Saturday at the USA Softball Hall of Fame Complex in Oklahoma City.

Jimmy Gillispie/Stillwater News Press Ripley High senior shortstop Carlee Mollet throws to first base for a routine out during the Class A fast-pitch state championship Saturday at the USA Softball Hall of Fame Complex in Oklahoma City.

Jimmy Gillispie/Stillwater News Press Ripley High junior Kelsie McCollom celebrates hitting an RBI and reaching first base on an error during the Class A fast-pitch state championship Saturday at the USA Softball Hall of Fame Complex in Oklahoma City.

Hours before she and her teammates were set to compete for the fast-pitch softball state championship at the USA Softball Hall of Fame Complex, she was hit in the left eye with a softball.

During morning batting practice, Mollet attemped a bunt, but the ball bounced off the bat and hit her eye. Not the start she wanted before playing the final fast-pitch game of her high school career.

“Coach Hoff (Kaleb Hoffman) said when I was standing out there and getting ice on it that I was going to go 3-for-3 today,” Mollet said. “I think I went 4-for-4, so I’m pretty sure that ball knocked some sense into me.”

“At the beginning of the season, I knew we were very capable of this moment right here,” Mollet said. “We’ve worked so hard to get to this point. God has blessed this team with the most awesome coaches. With the talent we have, I just knew this moment was going to happen, and we came out here and did everything we could to make it happen.”

Hoffman’s prediction for his senior shortstop was quite accurate. Despite a swollen left eye, Mollet reached base all five times she went to the plate. She hit an RBI triple and two singles, while also reaching on a walk and Binger-Oney throwing error.

In the two previous games, Mollet reached base only three times. One of of those was a single, with the others coming from a walk and fielder’s choice.

“As a leadoff hitter, I’ve always had that mentality that as the first at-bat, I have to find a way on,” Mollet said. “In the last two games, I hadn’t gotten on with my first at-bat. I knew today I had to make it happen, because I knew if I got on, we have people to back me up to score me.”

Mollet and her teammates entered the state tournament with a season-long goal to accomplish. Their theme for the 2020 season was “Unfinished Business” after losing in the 2018 state finals and the 2019 state quarterfinals.

After some drama in the final half inning in which four-time state champion Binger-Oney finally put some runs on the board, Ripley made enough plays to win its first state title.

“It feels good to finally reach the tip-top of the mountain,” Hoffman said. “We were so close in 2018, and we’ve had so many teams before this team that laid the groundwork for today to come. Year after year, we continued to get a little bit better and a little more state tournament experience in us. … We stepped out here and acted like we had been here before, and it’s because of that great experience we had in the past.”

Ripley took command of the game early and never relinquished it, despite Binger-Oney trying to at least tie the game in the final half inning. Ripley grabbed a 2-0 lead in the first inning.

Mollet began the game by earning a leadoff walk before freshman Dakota Hall dropped a sacrifice bunt to move Mollet to second base. Senior Betty Wolfe gave the Lady Warriors a 1-0 lead on an RBI double to the left-center field gap. Two batters later, junior Kelsie McCollom reached first on a throwing error, which allowed Wolfe to score and give her squad a 2-0 advantage.

“It was huge. It allowed us to settle in and put them back on their heels a bit,” Hoffman said of those first two runs. “They are a great ball club, and we knew eventually they were going to score. It’s just way too explosive of a lineup to hold down for seven innings.”

A second Binger-Oney error helped another Ripley run to cross the plate in the second inning. An error at shortstop allowed freshman Taylor Boyd to reach base. Two batters later, sophomore Saylor Collier reached on a fielder’s choice before scoring during the next at-bat when Mollet hit an RBI triple to deep center field, giving Ripley a 3-0 lead.

The Lady Warriors left two runners in scoring position in the fourth inning, and added another run in the fifth, taking a 4-0 lead. Sophomore Brooklyn Gobble hit a one-out triple and McCollom followed with an RBI single to score her teammate.

Ripley’s two additional runs scored in the sixth proved huge an inning later when Binger-Oney rallied, but left the tying run at the plate. In the sixth, Ripley led off with four-straight bunts that resulted in an throwing error to allow a baserunner, a single, a sacrifice and a fielder’s choice.

Those four bunts allowed Hall – the leadoff batter – to score on the fielder’s choice. Mollet reached on the bunt single and later scored on an RBI single by Gobble.

“We kept talking every inning about how we needed to extend it,” Hoffman said. “Four isn’t enough. Five isn’t enough. We wanted to keep it going, because their lineup is so explosive and they can flip it anytime, as they showed.”

In the bottom of the seventh, Binger-Oney led off with two singles before a strikeout and third single that scored its first run of the contest. The next batter reached on a fielding error, which loaded the bases.

The Lady Bobcats’ Korbyn Skipworth cleared the bases with a three-run double to the left-center gap, cutting the lead to two runs. With two outs already recorded, the Lady Warriors needed just one more to close out the victory.

“When I looked back at the scoreboard and it was 6-4 with two outs, I was praying to get that one final out,” Mollet said. “I think their No. 2 hole came up and I knew we had gotten her out every time, so we can do it again.

“The last out is a hard one, especially when they come back and make it 4-6. We got in the huddle with coach and he told us to relax and play the game, and we did it and we finished it.”

The game ended during the ensuing at-bat when a grounder was hit to Ripley second baseman Kendyl Overton who threw to her sister, first baseman Carolyn Overton, for the routine out.

“The first year we made the state tournament, we had a lead with two outs in the seventh and they ended up scoring two runs,” Hoffman said. “Ever since that year four years ago, we play 21 outs almost every day in practice. We talk about how to win a state championship, you’ve got to play 21 outs and that 21st is the hardest to get, and it proved true.”

Ripley players and coaches charged the field and dogpiled in celebration as their fans screamed in the stands.

For the third-straight day at the state tournament, Gobble was impressive in the circle. She allowed only six hits – four of which came in the last inning – and walked two, in addition to striking out six batters.

“Huge outing,” Hoffman said. “She executed pitches these last three days, and honestly, the last two weeks. The regional tournament and the state tournament are the best I’ve ever seen her throw, which is a pretty big compliment considering she brought us to the state tournament last year – along with the help of her teammates, of course. The last two weeks, she’s thrown the ball better than I’ve ever seen her throw it.”

In addition to Mollet and Wolfe, Ripley had only two other seniors on its roster in Erica Terrell and Elizabeth Jefferson. Terrell was the Lady Warriors’ starting center fielder.

“I think it means a lot for this group, but it’s also important for the groups in the past who have laid the foundation,” Hoffman said. “This group was the one who finally got over the top and got it done, but those kids that we’ve had in the past that worked their butts off to put our program at a level where the state tournament is an expectation – this is a big credit to them, as well.”