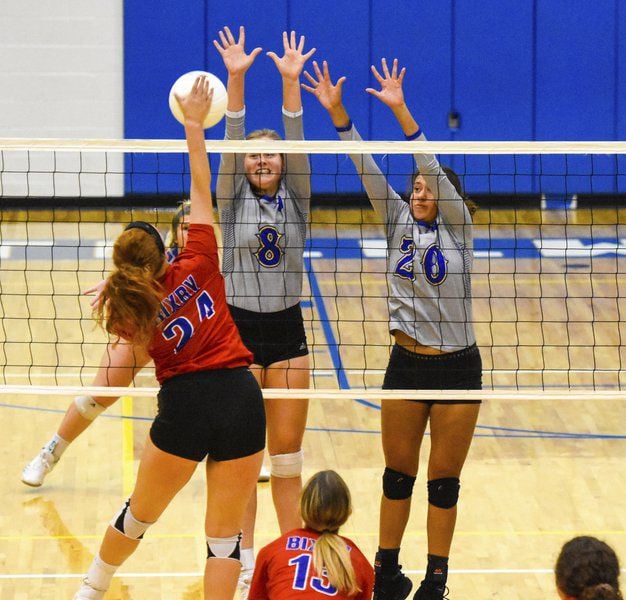 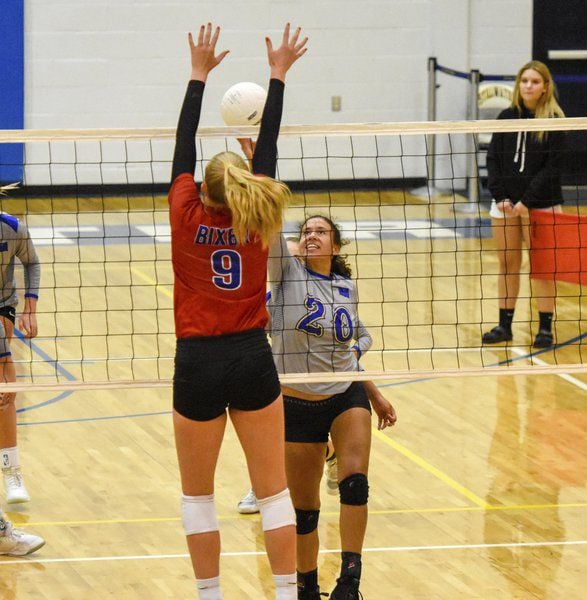 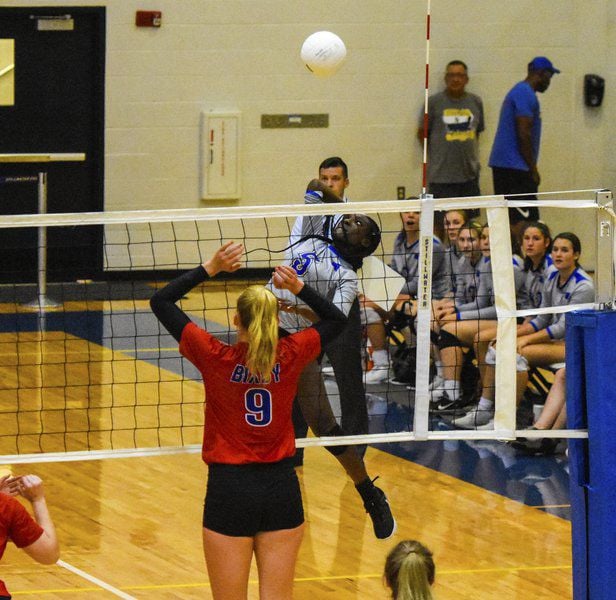 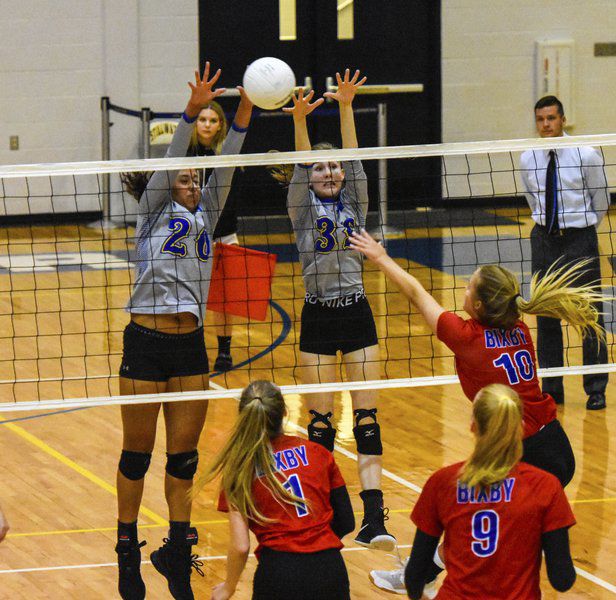 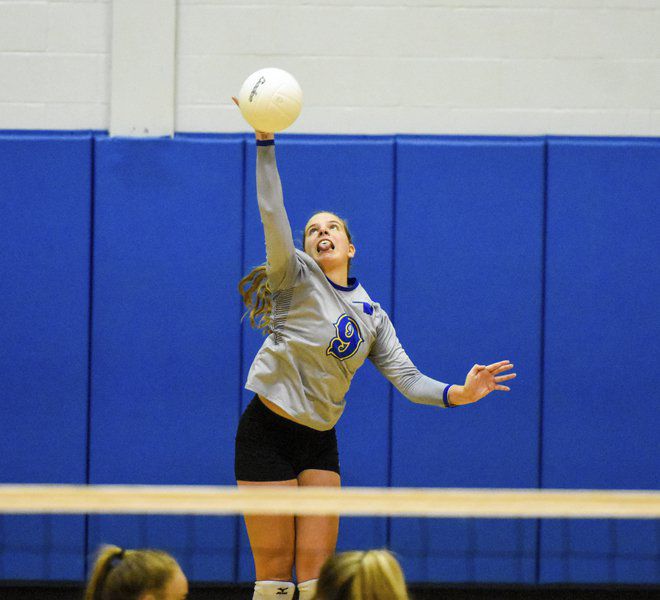 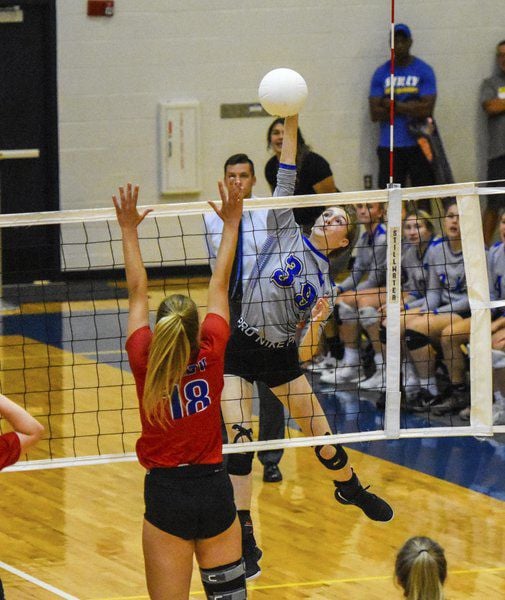 The Stillwater High junior recorded a kill on the previous point, earning the chance to serve match point in the fifth and final set of the night. McCutcheon’s serve sailed just over the net before dropping in the middle of the Bixby defense for the final point.

Stillwater won the final set 15-10, taking the match 3-2 over former coach Zoe Stinchcomb, who led the Lady Pioneers to a state tournament berth and state runner-up finish in her two seasons as coach before bolting for Bixby after last season.

“This win felt really good,” SHS senior McKenzie Vilade said. “Obviously, Bixby is a big rival, personally for us this year. It was good to come out on top.”

Vilade added she doesn’t have hard feelings for Stinchcomb, but she wanted to win tonight’s match regardless.

“We’ve moved past it,” Vilade said. “Things happen. You do what’s best for yourself. I get it. It was good to see her, but I’m glad we won. Yeah, we can be friends off the court, but when we’re playing against each other, it’s over.”

First-year SHS coach Kyle Liechti was proud of his team for winning the final two sets after failing to close out the third one, allowing Bixby to take a 2-1 lead. He knew it was an emotional night for some of his players.

After allowing Bixby to score the final five points of the third set, which it won 25-23, the Lady Pioneers grabbed control of what could have been the final set with a 6-0 run. Their 12-10 lead in the fourth set grew to 18-10, thanks to a pair of kills from freshman Bess Glenn and an ace from junior Sophia Price.

Stillwater (5-6) scored the final six points of the set to take it 25-13. It began with a kill from Glenn, and continued with two Bixby mistakes, an SHS block, a McCutcheon kill and a Glenn kill for the final point.

Players like Glenn and McCutcheon, along with many others, are seeing their first real varsity action this year. Some played very limited minutes last year, but they’re being relied upon this year, so building that chemistry and trust has helped through the first month of the season.

“Confidence is something we’re working on,” Liechti said. “It’s starting to show a little bit. We have a little bit more trust in each other, so we’re more confident hitters.”

The Lady Pioneers used that momentum to take an early lead in the final set. A pair of kills from McCutcheon and senior Sam Sanchez gave them a quick, 2-0 lead. A few points later, Stillater led 5-1 and never looked back.

Bixby (1-10) never let the set get out of hand, thanks to several timely kills, but the Lady Pioneers never let Bixby gain any momentum, as it only scored back-to-back points once and that came with a 5-1 deficit.

Stillwater had offensive contributions from seniors Shakira Lane and Vilade, along with Glenn and McCutcheon during the set. Senior Lauren Phillips also recorded a kill and two aces during a 3-0 spurt.

“Personally, I had a rough night, so the team was a big part of it,” Vilade said. “We really came together and picked each other up. Both of our middle hitters played amazing tonight. We just had the mindset to win the whole time, but at the end, the light just clicked and we went for it.”

After a Bixby point, Stillwater scored the final points of a set filled with runs. After four Bixby miscues, Glenn finished the set with a block to take an important first set.

“That first set is really crucial,” Liechti said. “That was a big deal. If we can get to a point in the season where we don’t have to start down 4-0 or 5-0 that would be kind of nice. I’m proud of the way they finished, especially that one.”

Stillwater will try to carry the momentum gained Tuesday into this weekend’s Bishop Kelley Tournament, which begins Friday with pool play and ends Saturday with bracket play.