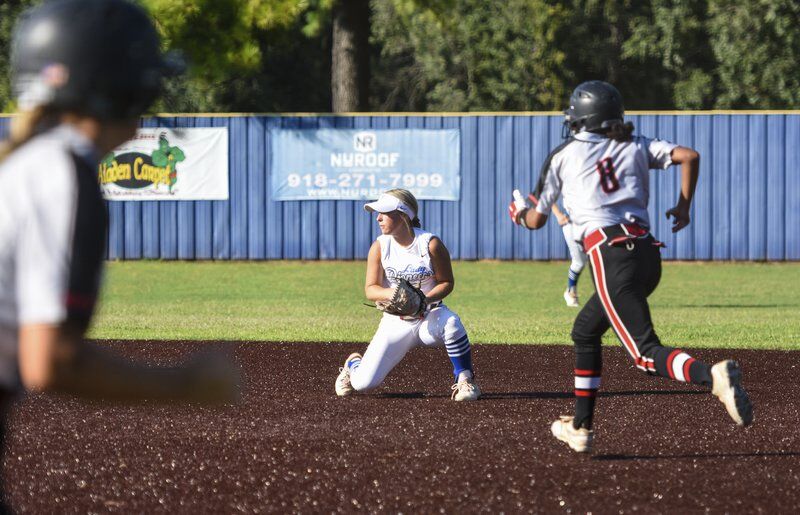 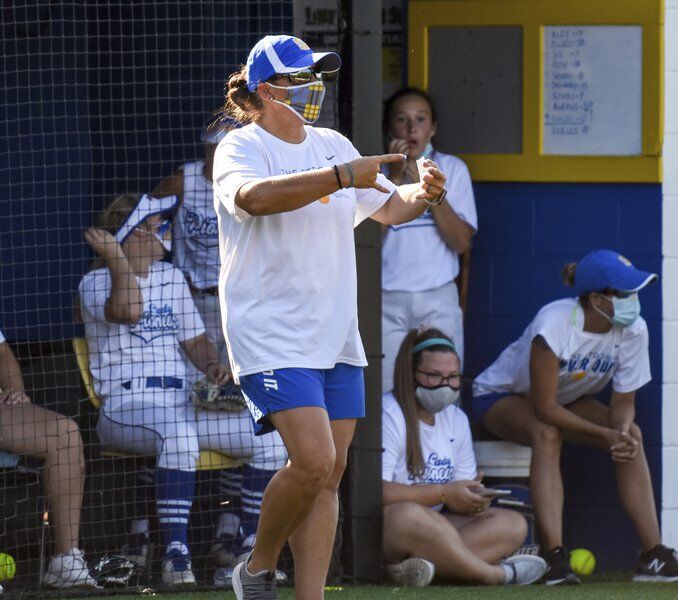 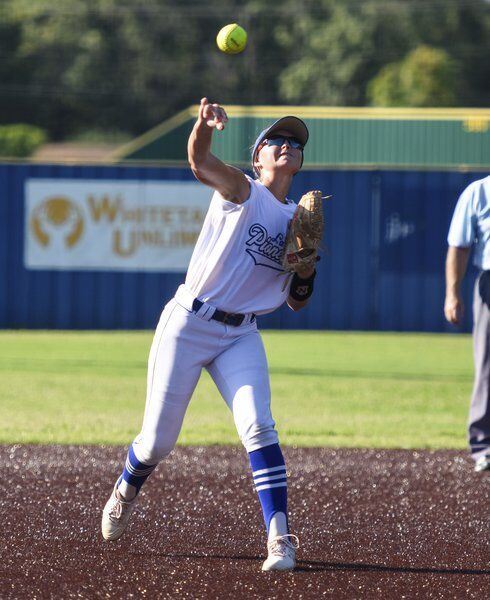 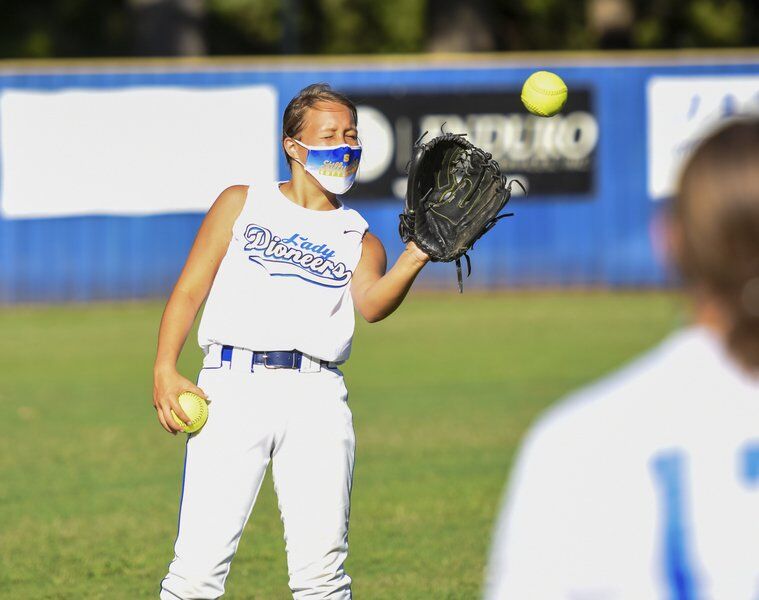 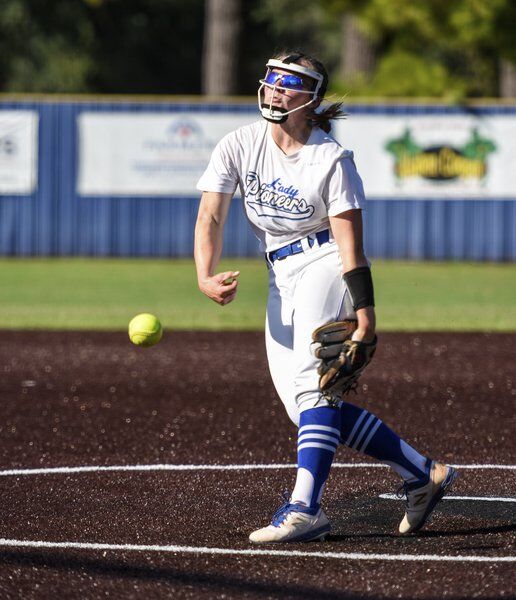 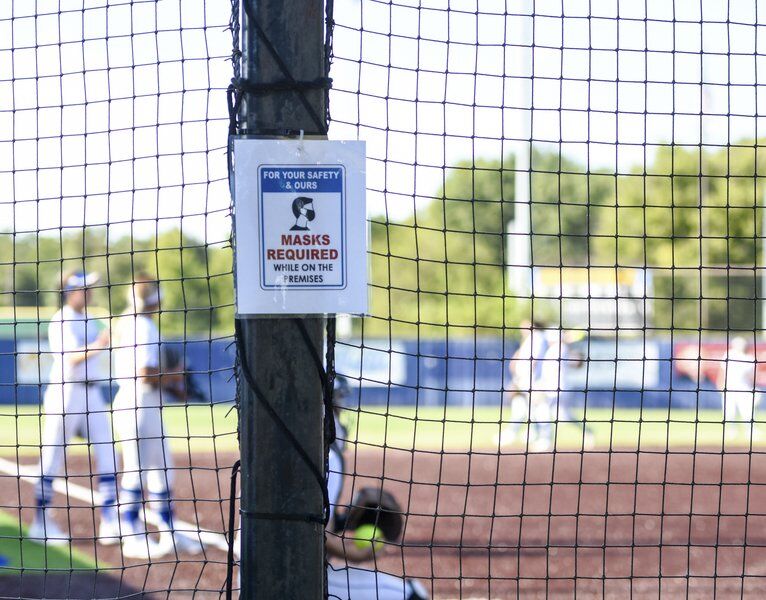 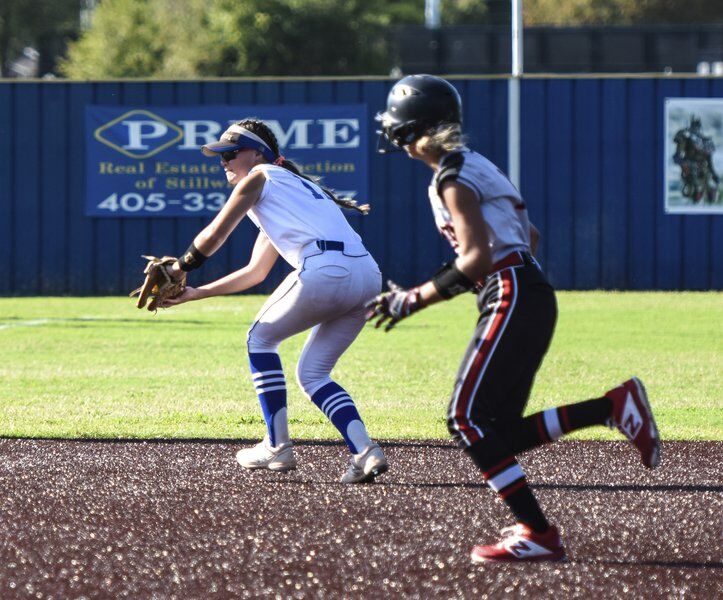 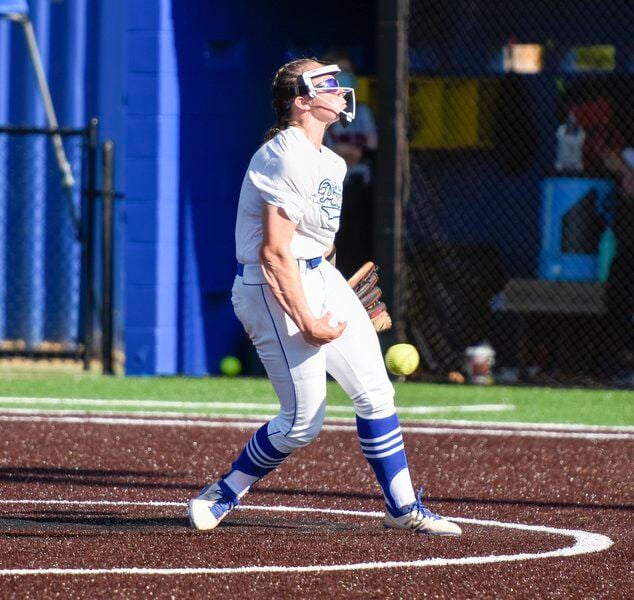 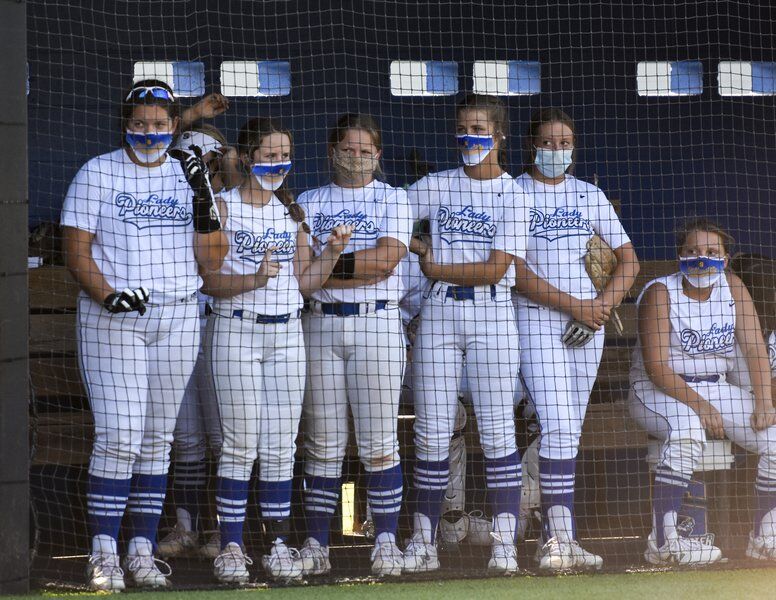 Sidney McLaughlin wasn’t sure why she swung at the particular pitch that she drove over the center field fence Monday night at Couch Park.

In fact, she laughed when asked about it after the game.

The Stillwater High junior catcher’s first home run of the season helped solidify a dominating win by the Lady Pioneers in their home opener of the 2020 season. They won 11-2 over Union in a Class 6A district contest.

McLaughlin led off the bottom of the sixth inning with her solo blast. She was 1 for 2 at the plate with a hit-by-pitch in the first inning.

She hit a line drive to straight center field, and it carried just enough to clear the outfield fence. After rounding the bases, the only person at the plate was the next batter – freshman Addyson Brown.

In the past, the whole team would clear out of the dugout and circle home plate awaiting the home run hitter. In the current COVID-19 pandemic, home run celebrations might be less celebratory, but it was still a happy moment for McLaughlin.

“At that point, I had been struggling at the plate and it wasn’t a good pitch to swing at,” McLaughlin said. “I don’t know why I hit it, but it just works, I guess. Sometimes you just get lucky. I honestly was in awe when it went over. It was a good momentum builder.”

SHS coach Karie Linsenmeyer was thrilled for her catcher. She knows McLaughlin hasn’t been hitting as well as she’d like, so it was nice to see her blast a home run at home.

“She’s been struggling a bit at the plate for her standards,” Linsenmeyer said. “We haven’t faced any pitcher that’s been super hard to hit, and I think she has to find that timing. That’s what I’ve been trying to tell her. Her swing is great. It’s all about timing and getting it all connected.”

Another Lady Pioneer who had a good day at the plate was sophomore Kaylee Linsenmeyer. She was 3 for 3 with two doubles on the night.

“I’m super proud of that,” coach Linsenmeyer said. “She may not like hitting nine hole, but I like it. She gets to see good pitches and she can turn that lineup over. There’s less pressure, too. If she keeps doing that, that’s all we can ask for. She’s a good baserunner, so it’s a good mix for her. I can see us moving up at some point, but right now I kind of like it.”

Stillwater took control of the game in the first inning. After senior Alex Griffin was walked, McLaughlin was hit by a pitch and Brown was walked to load the bases. Junior Kendyl Prichard kicked off the big winning with an RBI single.

Senior Delaney Wooldridge followed with a two-run single before junior Makenzi Swick hit an RBI double to score Prichard. Two batters later, Kaylee Linsenmeyer drove in two more with her first double of the contest down the left-field line.

“We’ve done that almost every game,” Linsenmeyer said. “We score early and then we coast a little bit. It’s a concern of mine. Having quality at-bats is a concern, and we have some that are doing well, but we’ve other things that can improve quite a bit.”

Union threatened in the second before scoring a pair of runs in the third inning. Union had two runners in scoring position in the fourth, but Prichard replaced Swick on the mound and closed out the half inning with three-straight outs – including two strikeouts.

Swick and Prichard combined to allow six hits and strike out nine batters.

“Makenzi didn’t pitch like she has been, so that was a little disappointing,” coach Linsenmeyer said. “She’s human. She’s had a really good start to the season and she’s pitched really well. But, Kendyl came in and shut it down and that’s what we need to do. Between the two of them, we have good pitching and they’re different enough that we’re able to do that. With all of (Union’s) lefties, Kendyl might have been a better fit anyways, but Makenzi can pitch better than that.”

In the next three innings, Stillwater amassed five runs to increase its lead. It started with a McLaughlin RBI double to score Kaylee Linsenmeyer.

An inning later, Griffin hit an infield single that scored two runs. Kaylee Linsenmeyer caught Union not watching her as she rounded third and scored on the play from second base. McLaughlin’s home run came in the next inning before a triple by Brown and an RBI groundout by Prichard.

“We had gotten our butts chewed previously for letting off the gas,” McLaughlin said. “There were two innings we didn’t score and it’s always rough, but you have to get through it somehow. I guess a little butt chewing is what it takes.”

The win was the third in a row for Stillwater (5-2) and its first district victory of the season. The Lady Pioneers were fresh off their championship at the Cushing Tournament on Saturday.

They went 4-1 at Cushing, only dropping a game to Blackwell that Coach Linsenmeyer jokingly said she didn’t want to talk about again. Despite the tournament win, she said her team still has plenty to work on moving forward early in the season.

“We haven’t really played a complete game yet,” Linsenmeyer said. “But they’ve done well. We still have a couple of kids not out there, so we could be better.”

Stillwater will host Bixby at 5 p.m. Tuesday at Couch Park for another district contest.