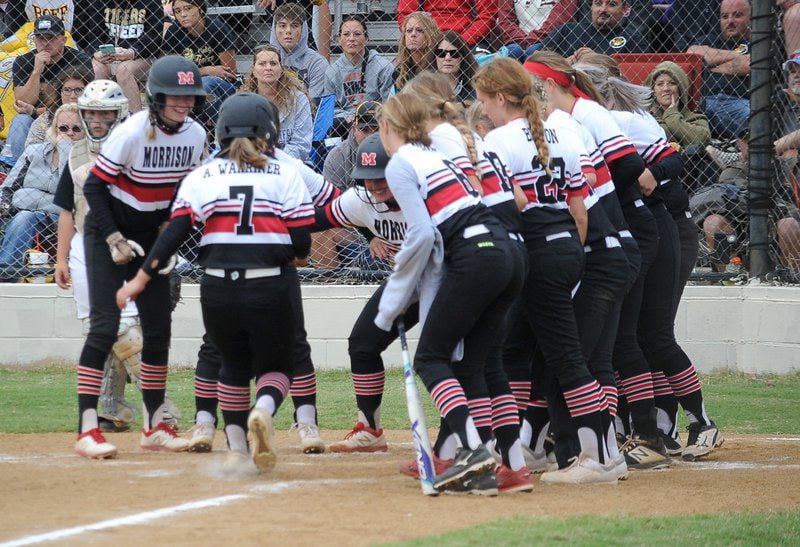 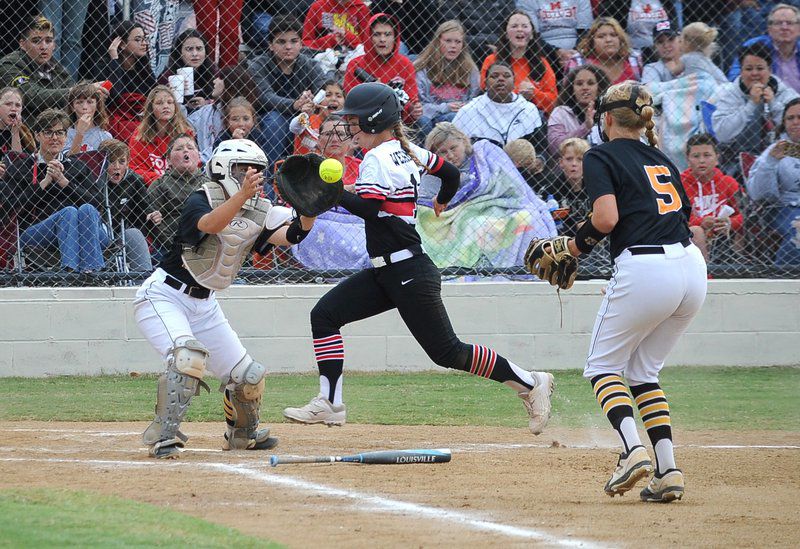 Morrison High’s Maddy Wehrenberg, center, crosses home plate before being tagged out to score a run for the Wildcats during Thursday’s the Class A fast-pitch state tournament against No. 2-ranked Roff in Shawnee. 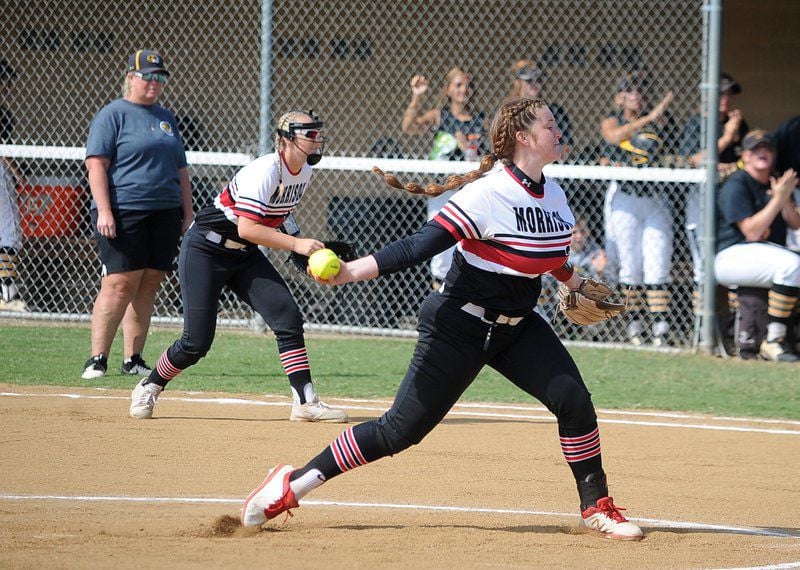 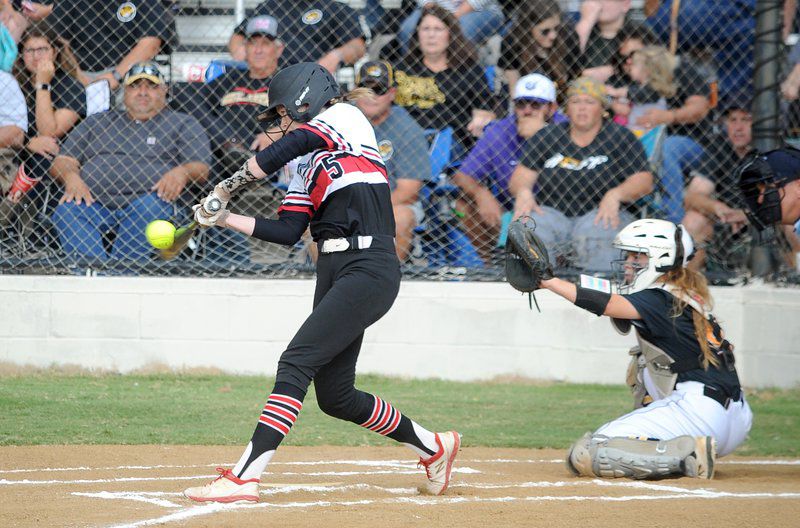 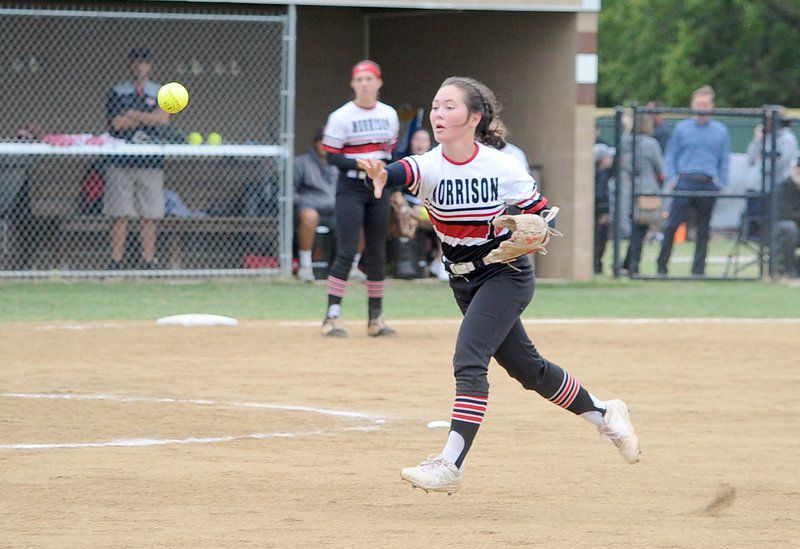 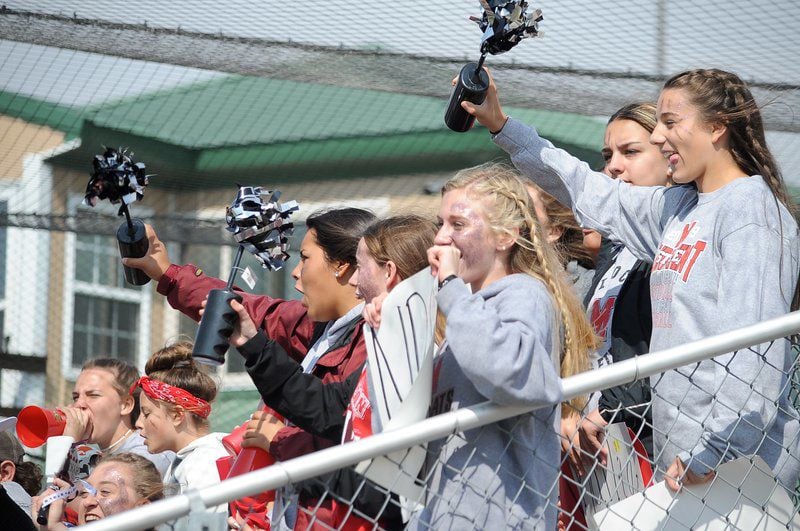 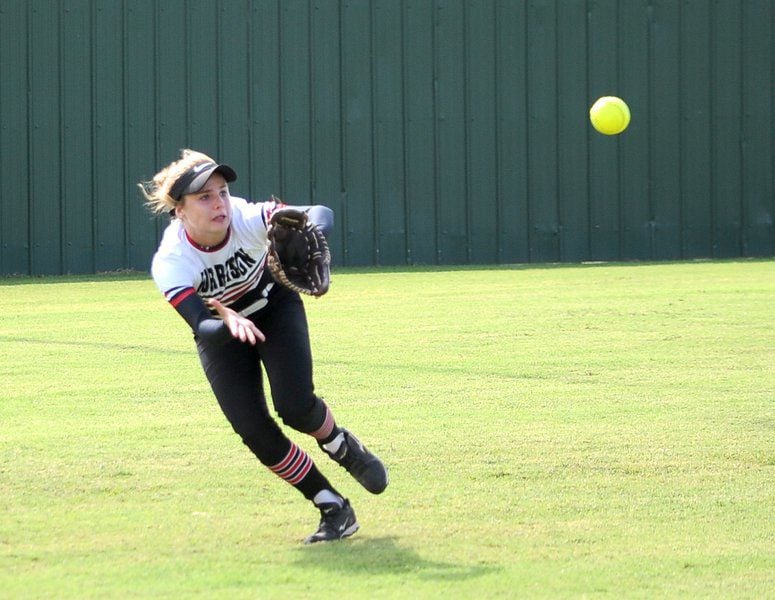 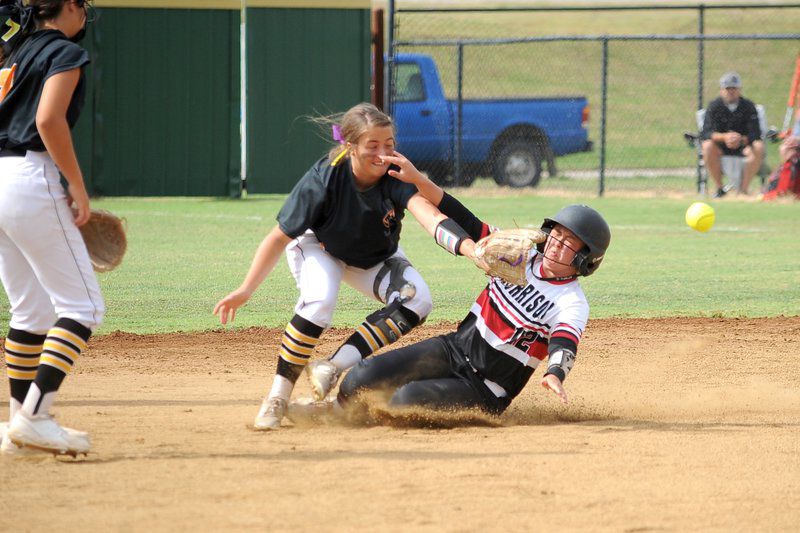 Morrison High’s Maddy Wehrenberg, center, crosses home plate before being tagged out to score a run for the Wildcats during Thursday’s the Class A fast-pitch state tournament against No. 2-ranked Roff in Shawnee.

A program that had never reached the state tournament didn’t act like the new kid on the block at the Ballfields at Firelake. The Lady Wildcats played a clean game defensively, were aggressive on the bases and took advantage of mistakes by Roff.

Morrison appeared as the more experienced squad in front of a large crowd, full of fans wearing red and black hoping to watch history. Their wish was granted.

Morrison defeated Roff 6-2 in the first round of the Class A state fast-pitch softball tournament. Their first-ever state game resulted in a win that wasn’t even as close as the final score.

“I couldn’t be more excited for the girls,” Morrison coach JT Freeman said. “I couldn’t be more excited for the school and the community. You saw the support we had – bussed over two or three buses full of kids. It was certainly a great atmosphere. We’ve never been here before, so like regionals, we had some jitters we had to work out, but once we started executing and getting leadoff base runners stealing bases, getting those squeezes down and taking that deep breath, it was a whole lot of fun, I’ll tell you that.”

Pitcher Kaylyn Raper was at a loss for words after the historic win.

“Oh my gosh, this was so fun,” Raper said. “It kind of feels unreal. It hasn’t set in yet, but it was so much fun. I got chills when I saw everyone in the stands. It was so cool.”

The Lady Wildcats (31-4) extended their winning streak to 23 games with Thursday’s victory. They did so by taking advantage of three Roff errors and playing aggressive on the base paths.

Their determination to constantly be looking to steal bases has been one of the staples this year under their first-year coach. Freeman also said his scouting report on the Roff catcher was correct.

Morrison stole second base seven times. Whichever Lady Wildcat reached base was most likely going to steal second base and put herself in scoring position.

“We’re athletic and we have some pretty good team speed,” Freeman said. “We have been very aggressive on the bases all year. Our philosophy offensive is we attack and we’re aggressive. … Now, we did have a lot of good scouting reports to be aggressive and we followed that plan.”

Morrison was able to manufacture runs throughout the contest, on only six hits. The first came in the second inning after Jasmine Warriner earned a one-out walk. After she stole second and advanced to third, Warriner scored on a Paris Warriner bunt single.

Two innings later, an error put Raper on base. Paris, who batted in the No. 8 hole, again came through with the clutch at-bat, scoring Raper on a fielder’s choice to give the Lady Wildcats a 2-0 lead.

Morrison added a third run on a wild pitch in the fifth inning before it scored three key insurance runs in the top of the seventh inning. A single and error scored Hally Vaughn and put Kallie Rupp on base.

Two batters later, Audrey Warriner blasted a two-run home run over the left-field wall. It was a line drive shot that ended her game that began 0 for 3 with three strikeouts. She gave her team a 6-0 lead.

“We tell them all the time whether you’re 0 for 4 or 4 for 4, your mentality doesn’t change and you don’t ride the rollercoaster,” Freeman said. “She was 0 for 3 before that, but I told her you’ll get another one so get the most of it. She really got a good piece of that ball and she did what she’s done a lot this year. Those were two big insurance runs that we were playing for right there.”

Roff, ranked No. 2 in the state, didn’t go quietly without a fight. The Lady Tigers scored two runs on a walk, RBI double and an RBI single.

Freeman said the late rally didn’t shock him, but he can use it as a teaching moment to his team moving forward.

“We were in a game with Ripley earlier that I reminded them of,” Freeman said. “Great teams like that – they’re the No. 2 team in the state for a reason – they’re going to punch and fight and not lay down. I wouldn’t say I was surprised. Obviously, I would have loved a 1-2-3, stress-free inning, but we didn’t get it, but it was all about one pitch, one out at a time.”

Raper was dominant on the mound, throwing a complete game. She allowed five hits and a pair of runs, while striking out four batters.

“I would have liked to keep the shutout,” Raper said. “I’m not happy with that, but I got the job done.”

Freeman was proud of his pitcher.

“Kaylyn was fantastic, just like she’s been all year and her entire career,” Freeman said. “She’s just a competitor and she’s the ultimate leader. She just battles so hard in the circle. She pitched well and trusted our defense, because our defense is pretty good most days.”

Fairland defeated Morrison, 2-0, in a four-inning game at the Ripley Tournament on Aug. 16.

“We’ve seen them before, so we know how good they are,” Freeman said. “There are no bad teams in the state tournament. We’ll have to rise to the occasion tomorrow.”

Raper said the Lady Wildcats are trying to keep things in perspective as they head to the state semifinals for the first time.

“We keep telling ourselves we’ve played at Firelake our whole lives, so it’s just another tournament,” Raper said. “We’re just playing ball, seeing what we can accomplish.”