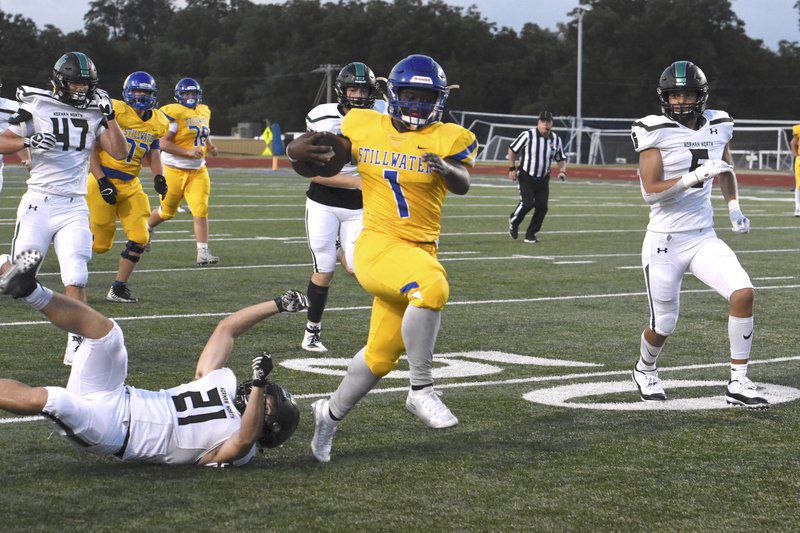 Jimmy Gillispie/Stillwater News Press Stillwater High running back Qwontrel Walker will help stabalize the Pioneers' offense this fall. Walker, who has rushed for more than 5,000 yeards in his first three years, will be called upon to lead the team, which lost a handful of talented players from its 2019 state runner-up finish. 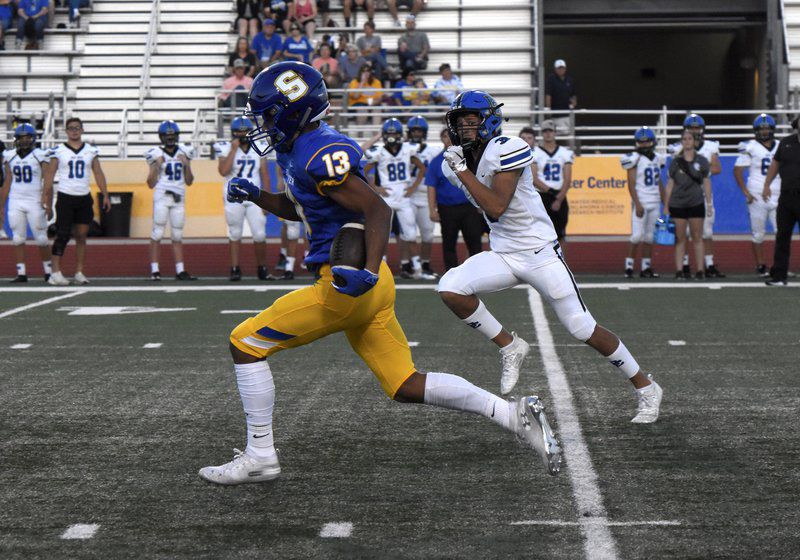 Jimmy Gillispie/Stillwater News Press Stillwater High wide receiver Steven Brown burst on the scene last fall as a junior. Brown will return as the leading receiving target for quarterback Caleb Allen, who will be making his first varsity start this fall.

Jimmy Gillispie/Stillwater News Press Stillwater High running back Qwontrel Walker will help stabalize the Pioneers' offense this fall. Walker, who has rushed for more than 5,000 yeards in his first three years, will be called upon to lead the team, which lost a handful of talented players from its 2019 state runner-up finish.

Jimmy Gillispie/Stillwater News Press Stillwater High wide receiver Steven Brown burst on the scene last fall as a junior. Brown will return as the leading receiving target for quarterback Caleb Allen, who will be making his first varsity start this fall.

Although these beautiful, warm spring nights would be perfect for spending at O’Brate Stadium or Cowgirl Stadium, the itch for football was briefly scratched last week.

Sure, baseball, softball and all spring sports are missed by fans everywhere. Unfortunately, we’ll have to wait until next year to watch the Cowboys’ or Pioneers’ spring squads. Luckily, it won’t be as long until we get football – pending life goes back to normal during the upcoming months.

However, last week gave us sports fans a much-needed vacation from the coronavirus pandemic that stopped the world. It was only three days long, but it was glorious.

It’s usually an event I’ll casually watch, even as a lifelong fan of the Las Vegas Raiders. In more years than I’d like to admit, they’ve picked in the top half of the first round due to their lack of wins during the regular season.

Yet, the draft has never captured my interest. The same can be said for college recruits.

It’s not that I don’t care about the athletes or want to see my favorite teams improve. I just prefer to see if the hype will pan out on the next level. Hype is fun, but if it doesn’t result in wins, it just leads to disappointment.

Thus, my interest in the draft was never high. Also, it used to drag on forever. Thank goodness, the NFL has lessened the number of rounds and spread it out to three days.

But, this year, the draft had a different meaning for sports fans. We’re missing games. We’re going stir crazy to watch something live.

That’s where the NFL won over the weekend. Although it was done over video teleconferences, it was live. We watched coaches, general managers, owners and players react in real time.

And, let’s be honest, there was something special about watching families celebrate, whether that of a player or a coach. It humanized everyone.

As quick as it began, it was gone in a flash. Those three days flew by and NFL fans are left waiting to see what happens next. Hopefully, it’s training camp this summer and a normal season in the fall.

If that happens, let’s hope it trickles down to the college and high school level. Football fans in Stillwater have a lot to be excited about this fall.

Oklahoma State is primed to possibly have one of its best seasons. The Cowboys return a running back and wide receiver combo in Chuba Hubbard and Tylan Wallace that’s tough to match anywhere across the country.

OSU also has a young quarterback in Spencer Sanders who kept improving in his first season on the field as a Cowboy. Combine that with the majority of starters on both sides of the ball returning, and OSU fans should be excited for the fall.

Of course, that hype has to produce, as said earlier.

The same can be said for the Stillwater High football squad. The Pioneers are coming off back-to-back state runner-up finishes.

However, they’ve lost a lot of talent in the past two years. Gone are a quarterback and wide receiver who were among the best to ever do it in a Stillwater uniform. Three starters in the secondary, who will all be playing college football, are also gone, along with some stalwarts at linebacker and on the defensive line.

SHS may not be able to pull its starters at halftime or early in the third quarter as it did the majority of the 2019 season, but the Pioneers will still be a force to be reckoned with this year. Don’t count them out.

The Pioneers return one of the best running backs in the state in Qwontrel Walker, who is drastically under-recruited. Watch his game film and you’ll understand. Division I recruits and signees faced him and couldn’t slow him down, yet Walker isn’t receiving the same attention.

The same could be said for wide receiver Steven Brown. He had some good moments as a sophomore, but he burst on the scene as a junior. Unfortunately, a season-ending knee injury cost him a chance to play in the state title game, but Brown is a highlight reel player.

Across the ball, Baylor commit Tevin Williams is back at cornerback. Carter Barnard will join him after a junior campaign where he racked up four interceptions.

Luke McEndoo and Gabe Brown will hold down the front seven. Both will be college football players.

In the offensive trenches, the Pioneers return most of their starters. Lance Peterson is leading that group when it comes to college recruiting, but it's a solid group that will protect a new quarterback.

Caleb Allen takes the reigns from Gunnar Gundy. Allen is a lean QB with a good arm. His production will be a huge key to Stillwater’s success. If he can distribute the ball and avoid mistakes, SHS is primed for another great season, because he has enough weapons around him to help transition into his first starting job.

It should be a fun season to watch. Let’s just hope it happens.