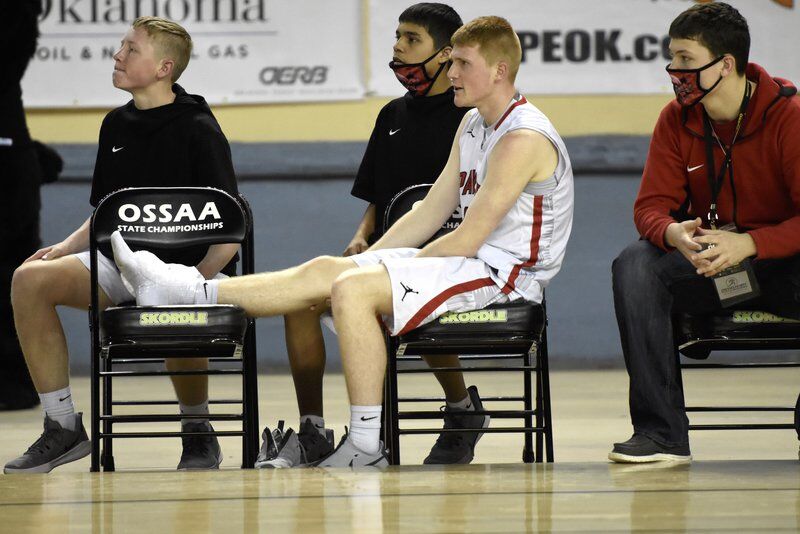 Photos by Jimmy Gillispie/Stillwater News Press Pawnee High junior Brad Reeves, seated center, watches his team play in the second half of Thursday’s Class 3A State Tournament quarterfinal game at Jim Norick Arena in Oklahoma City. Reeves injured his right ankle in the opening minutes of the game in a collision with an official. 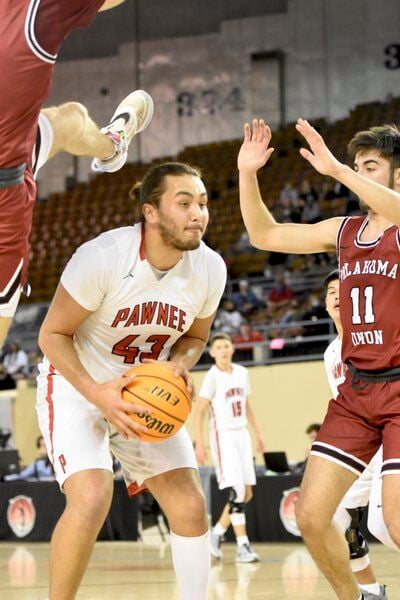 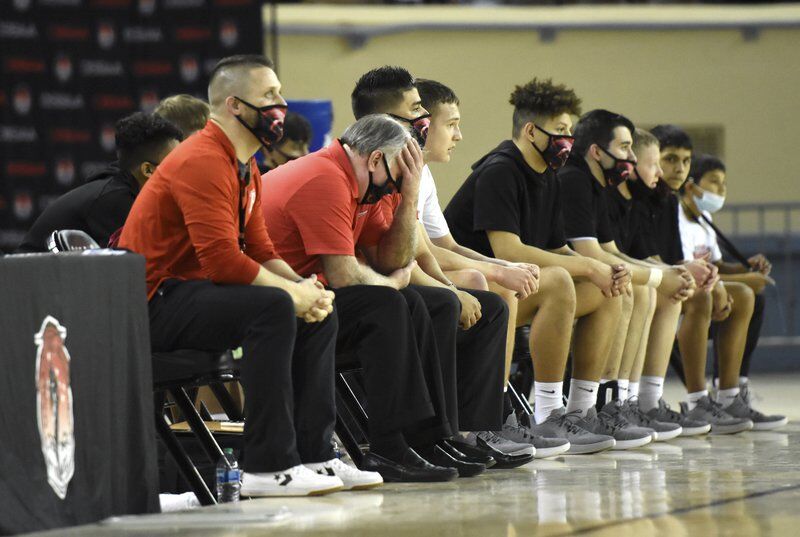 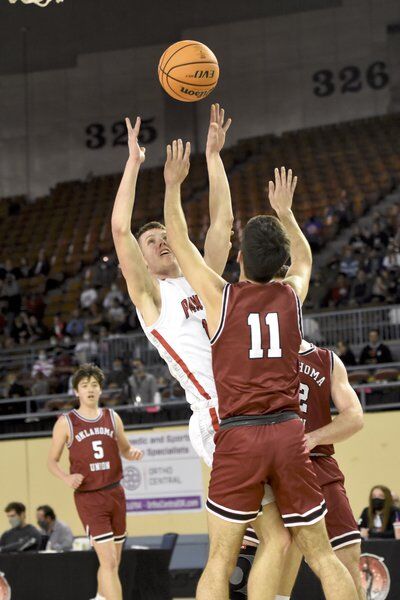 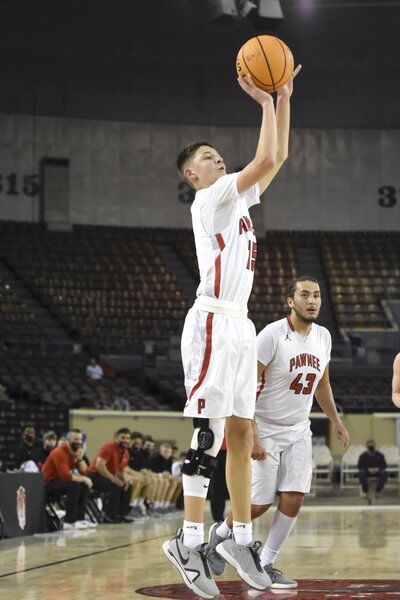 Photos by Jimmy Gillispie/Stillwater News Press Pawnee High junior Brad Reeves, seated center, watches his team play in the second half of Thursday’s Class 3A State Tournament quarterfinal game at Jim Norick Arena in Oklahoma City. Reeves injured his right ankle in the opening minutes of the game in a collision with an official.

OKLAHOMA CITY – Pawnee lost its leading scorer in Thursday’s Class 2A state quarterfinal contest before it even scored a point inside Jim Norick Arena.

Brad Reeves, a 6-foot junior, led Pawnee in points per game entering the state tournament, but his trip to the Big House ended in a matter of a couple minutes.

On a fast break early in the first quarter, Pawnee junior Gunnar Gordon passed to Reeves as he ran toward the corner, but Reeves and one of the officials collided. Both fell to the ground, but only the official got up and ran down court as Dale grabbed possession and ran its own fast break.

Reeves laid on the court until Pawnee coach David Page helped him up and off the court with one of Reeves’ teammates. The Black Bears’ leading scorer didn’t put any weight on his right ankle, and his game was done as he sat on the bench with an ice-wrapped ankle for the remaining 30 minutes.

“I think when you get this far, there’s always a little bit of luck involved,” Page said. “Today, within two minutes of the game, luck went the wrong way and that was probably the biggest difference in the game.”

His loss was tough to overcome, and the Pawnee offense struggled early in his absence. Pawnee eventually found itself in a dogfight and a battle in the second half, but Oklahoma Union made a couple more plays to seal the victory in the final seconds.

“I’m very proud of our kids,” Page said. “We had a really good season. I didn’t quite expect it to end here, but that goes back to the luck involved.”

“Anytime you lose your best scorer off your basketball team within a minute and a half of the game, it’s probably going to determine the game. The game might be the other way if Brad is on the floor.”

With Reeves sidelined, Gordon took over offensively for the Black Bears. Despite attention on him all game, he led all players with 26 points. Gordon made 6 of 19 from 3-point range, despite a stretch of five minutes between the second and third quarter where he sank four from long range.

“He can do that quite often,” Page said. “Gunnar has to take control of the game for us to have a chance to win. We talk about it quite often. He’ll be bigger and better next year.”

Gordon also made all six of his foul shots. Pawnee’s offense ran through him first, but a pair of his teammates scored in double figures.

Pawnee struggled to score early in the game. It trailed 10-2 after the first quarter, and didn’t make its first field goal until 38 seconds into the second period. Gordon didn’t score until nearly 11 minutes into the contest.

“Maybe we didn’t handle the physicality as well as we should have, but we had a lot of chances,” Page said. “We could have won the game if we had made some plays that we didn’t. We’ve got to rebound here or there – just little things that we talk about all year.”

The Cougars built a double-digit lead in the first half, but Pawnee cut it to four at halftime before beginning the third quarter with a 8-0 run. The final 12 minutes of the game were tight, but OK Union led most of it.

Hollingshed made only one of two free throws. Pawnee lost the ball seconds later before a game-tying shot could be attempted. The Cougars (23-2) held on to play in Friday’s semifinals.

“They’re warriors and they’re going to come out and play,” Page said. “They’re competitors. We just made a few too many mistakes. My old junior high football coach told me the team that makes the fewest mistakes usually wins, and that’s what happened today.”

With the majority of his scoring returning next year, Page had one final message.

“We’ll be better next year, and we’ll be back here next year.”