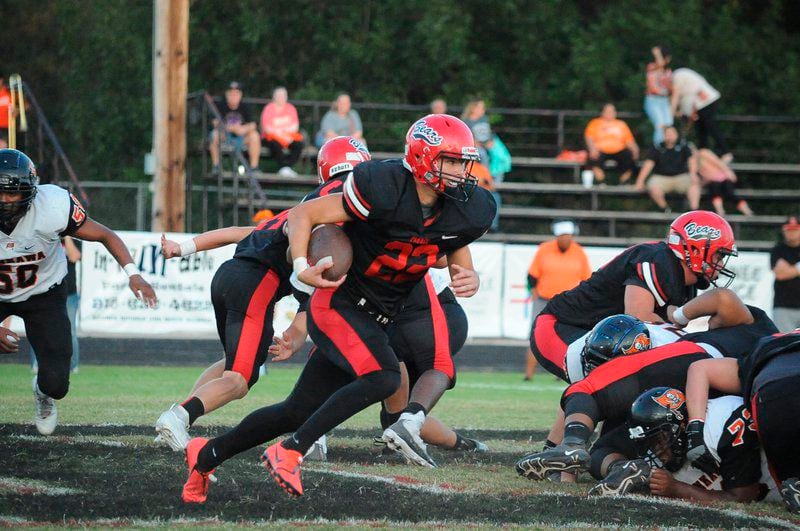 Pawnee High junior running back Trevor Mitchell carries the ball against Tonkawa at Memorial Field. The Black Bears head to Pawhuska this week to play for the Class A District 5 championship Friday night. 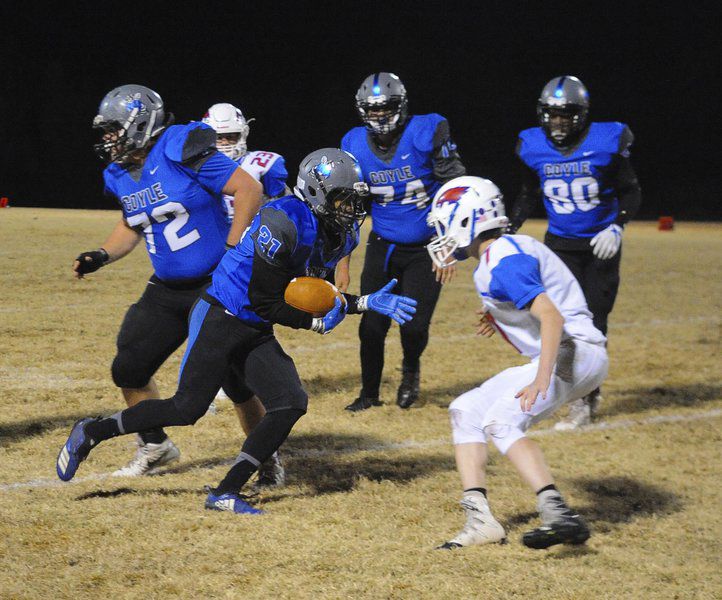 Pawnee High junior running back Trevor Mitchell carries the ball against Tonkawa at Memorial Field. The Black Bears head to Pawhuska this week to play for the Class A District 5 championship Friday night.

For more than two weeks, folks in Pawnee and Pawhuska have been awaiting Friday night’s contest.

Their respective teams will battle for the Class A District 5 championship at 7 p.m. at Pawhuska. It’s been a long-awaited matchup as both teams have been headed to this game for weeks.

Pawnee (9-0 overall, 6-0 district) has blanked its past two opponents, winning by a combined score of 102-0. The Black Bears had to defeat rival Hominy – for the first time in many years – and squeak out a last-minute win at Barnsdall before those past two easy wins.

Pawhuska (9-0, 6-0) has rolled its past five opponents since Morrison gave it a scare in late September. The Huskies haven’t scored less than 40 points in those five wins.

Now, the district title comes down to two unbeaten teams competing to remain near the top of the Class A rankings.

“I think the kids are excited to get to go play,” Cook said. “It’s going to be a great Friday night football game in Oklahoma.”

Pawnee and Pawhuska played last year in the regular season finale, but the game meant nothing. Even though they ended up tied after Pawnee won, the Black Bears were left out of the playoffs, based on district points.

This year, it’s nearly the opposite. The two teams are playing for the right to be the No. 1 seed out of the district when the postseason begins next week.

“The kids had a goal after last season that we were going to make the playoffs,” Cook said. “The first goal is reached. The second goal is they wanted to play for a district championship and possibly win one. It’s exciting in Pawnee right now and the kids are excited. We’re looking forward to Friday night.

“We’ve been playing really well on both sides of the ball. Pawhuska is a really good team. We really don’t have anything to lose. It’s going to be a good game. The team that makes the fewest mistakes is going to be the one that comes out on top Friday night.”

Expect another high dose of Damon Caine (#CaineTrain) once again as Coyle aims to earn a home playoff game this week.

Coyle is led by Caine, who has rushed for more than 2,503 yards and 38 touchdowns this fall, as its won the past three games and secured a postseason berth. A Coyle (7-2, 4-1) road win will earn the Bluejackets one more home game next week when the Class C playoffs begin.

However, a win by Bluejacket (5-4, 3-2) would create a three-way tie with Bluejacket, Coyle and Covington-Douglas for the second, third and fourth spots in the district. The playoffs seeds would come down to district points.

Coyle can lose to Bluejacket by 12 or fewer points and still earn the No. 2 seed behind Southwest Covenant.

The Demons secured the No. 2 spot in the 3A District 1 last week with a huge home win over John Marshall. This week, they are aiming to win four in a row heading into next week’s playoff opener.

P-T (8-1, 5-1) travels to Mount St. Mary (1-7, 0-6) this week to face a team that has a lone win over a winless Crooked Oak squad. The Demons have rebounded since their lone loss with two key wins and a dominating victory.

Meanwhile, Mount St. Mary has lost seven-straight games and hasn’t scored more than 14 points in any of those losses. Opponents have scored at least 37 points during the losing streak.

With the Class B playoffs beginning next week, Yale will try to rebound from last week’s lopsided loss. The Bulldogs will try to do so against the district’s top team.

For coach Johnny Ray, reaching the playoffs is a success with the youth of this year’s squad. The Bulldogs will likely face unbeaten Regent Prep next week, but first comes a road game at Davenport.

After a devastating overtime loss last week, Perry will come back home for senior night and a nondistrict contest.

Perry fell to the No. 4 seed following their loss to Oklahoma Christian School, and will face a top-seeded team next in the 2A playoffs. But first, the Maroons welcome a solid Class A squad for their final home game.

Much like several other area teams, Cushing isn’t playing for any postseason berth this week. Instead, the Tigers are hosting the No. 3-team ranked team in 4A for senior night.

Cushing has the fourth spot in the district locked up, so it will be traveling next week. Cushing has won three of its past four games.