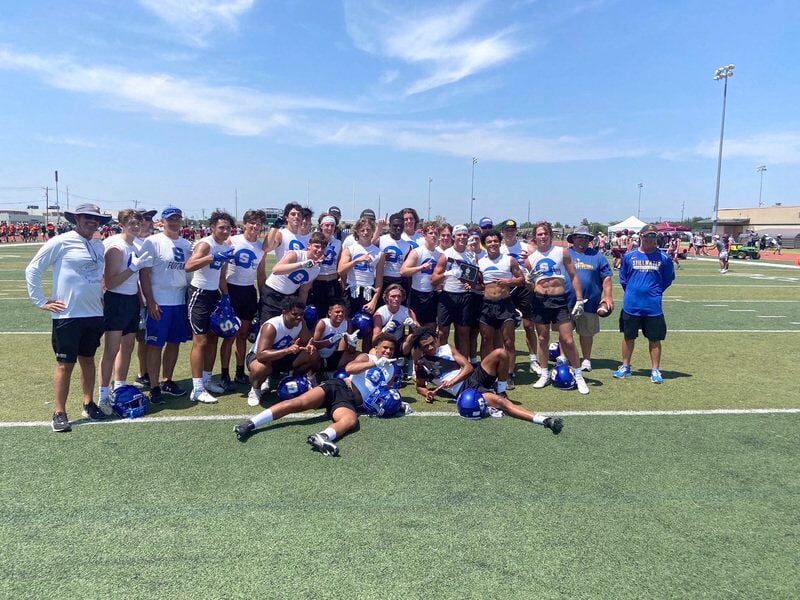 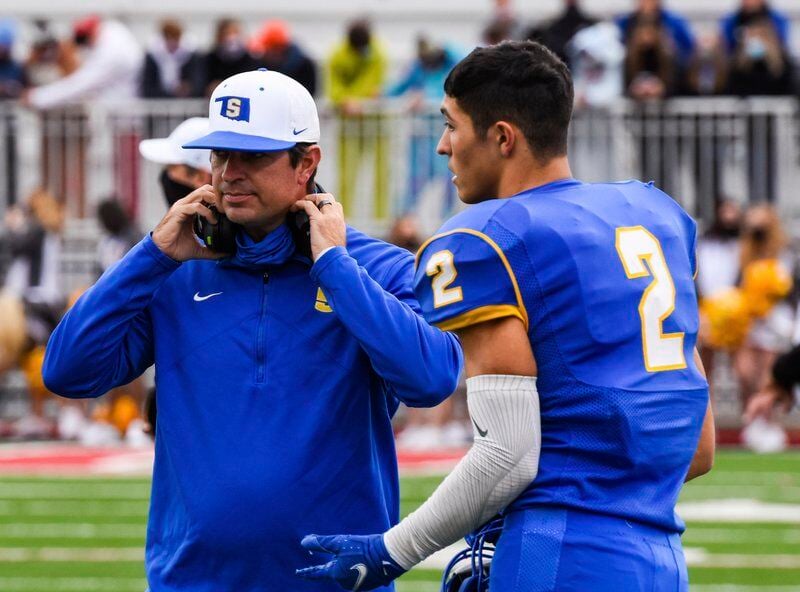 Jason Elmquist/Stillwater News Press Stillwater High football coach Tucker Barnard talks to linebacker Gabe Brown during halftime of the Class 6A-II state semifinal game against Choctaw in Owasso. Brown is one of the leaders returning this fall. The SHS senior is committed to playing at Oklahoma State.

Jason Elmquist/Stillwater News Press Stillwater High football coach Tucker Barnard talks to linebacker Gabe Brown during halftime of the Class 6A-II state semifinal game against Choctaw in Owasso. Brown is one of the leaders returning this fall. The SHS senior is committed to playing at Oklahoma State.

Many of the well-known players have graduated during the past two years, but the Stillwater High football team could once again be set up for a successful fall season.

If the summer camps and training are any indication, the Pioneers will be a force in Class 6A-II this year.

The Pioneers went 33-3 over the past three years, losing twice in the state title game and once in the semifinal contest. They’ve also lost many of the players who helped create that success, especially during the past two years. A handful of those players are now or will be playing college football.

Yet, Stillwater appears to have reloaded its talent pool, according to coach Tucker Barnard. Some of those new faces played a bit last year, but many more will begin to build their own legacy on the gridiron this fall.

“I feel really good,” Barnard said. “Just to be honest, a couple of months ago, we didn’t know what we had for sure. What we did know is we have still done well in JV and our junior high teams have been solid. We knew it wasn’t like the cupboard was bare. I guess the question that still exists is will these do it in varsity football? I would say everything they’ve had the opportunity to do so far, they’ve done well.”

After a busy spring football season in May, the Pioneers headed to the Owasso Team Camp. They battled several teams from the eastern portion of the state and some from Arkansas.

Stillwater held its own, according to Barnard. He was pleased with how his team performed, especially considering it was the first time for many of them to be first-string varsity players.

The Pioneers also won the 7-on-7 tournament in Norman. That was a program first.

“It’s been a great summer,” Barnard said. “The weight room has been awesome. We won our first 7-on-7 tournament in our history over at Norman North. It’s a tournament we’ve been going to for a lot of years, and we’ve had some great teams that have not been able to win it.”

Stillwater rolled through the competition, earning the championship. Barnard said it might seem cliché, but his team scored often offensively and stopped opponents from scoring on defense.

Barnard explained why his team was able to do something past teams haven’t done despite having some of the best offensive players the program has ever seen.

“The first thing is, we were really efficient on both sides of the ball,” Barnard said. “I think we played five games, and we gave up like four touchdowns. It’s an offensive game, and you tend to think if you can get two stops, you can win. So, if you hold somebody to two touchdowns and you get two stops, you’re going to win most games.

“When we’re holding people to one touchdown or no touchdowns, then you’re going to win a lot of games. On the other side of the ball, I think in those five games, there were only four or five drives that we didn’t score. We were just really efficient on both sides of the ball.”

Barnard continued, saying as well as his team threw the ball in the 7-on-7 camp, he still believes his team’s biggest offensive strength this fall will be on the ground.

The Pioneers did lose four-year starter Qwontrel Walker, who finished his career as one of the 10 highest career yardage marks in Oklahoma history, to graduation. Yet, Barnard feels confident about his team’s ability to run the ball this year.

“As good as we were, I don’t necessarily think that’s our strength,” Barnard said. “I think running the football is going to be where we really make most of our hay. But man, we threw it really well, we ran good routes and had very few drops. Defensively, we got a bunch of turnovers and kept people out of the end zone.”

The Pioneers will have a familiar last name at quarterback, but it’s not the one who started three years and set program records before graduating in 2020.

Gunnar Gundy led the Pioneers to two state title games, but now it’s his younger brother’s turn to lead the team. Gage, a 6-foot-3 and 205-pound quarterback, has done well this summer in his first time leading the varsity squad.

“He’s come along maybe a little faster than what I would have expected,” Barnard said. “He’s really picking up things well. He’s got a super strong arm, and he’s a big, smart kid. If you went backwards in his career, he’s been a running back and a linebacker, so he’s a big, strong physical kid. He’s done a great job for us.

“He did a really good job for us last year before he got hurt. He broke his foot last year. … He’s worked really hard on the fundamentals and being a better technical quarterback. I was really impressed with his accuracy and decision making during 7-on-7.”

While comparisons might get made between Gage and Gunnar, Barnard doesn’t believe that will be an issue for the youngest Gundy. He said the two brothers are different players with different builds.

They both have a strong arm and throw the football accurately. That’s the one comparison Barnard cares about.

“I could be oversimplifying this, but I don’t think that’s going to be a problem for him,” Barnard said. “Him and Gunnar are so different. You would have called Gunnar a pocket passer all the way back into seventh grade. Gage has been more of an athlete – not to be critical of Gunnar’s athleticism because he’s a great athlete – but in terms of the positions he’s played. He’s got some tools that you can’t really coach with his size and arm strength.”

The Pioneers will keep lifting weights and conditioning four days a week for the next couple of weeks before the first day of practice in about a month. They’ll also be playing in the Shiloh Christian 7-on-7 camp in Springdale, Arkansas.

It’s become an annual rite of passage for the Pioneers. That will be the last team event they do before fall practices start.

“That’s kind of the exclamation point or period on our summer,” Barnard said. “Once we get back from that, we’ve only got five or six days left of summer workouts before we take a little break and begin fall practice.”