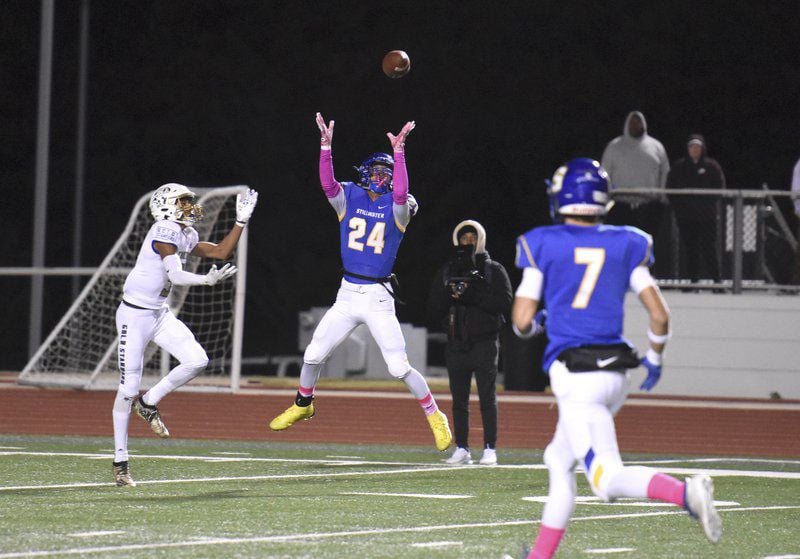 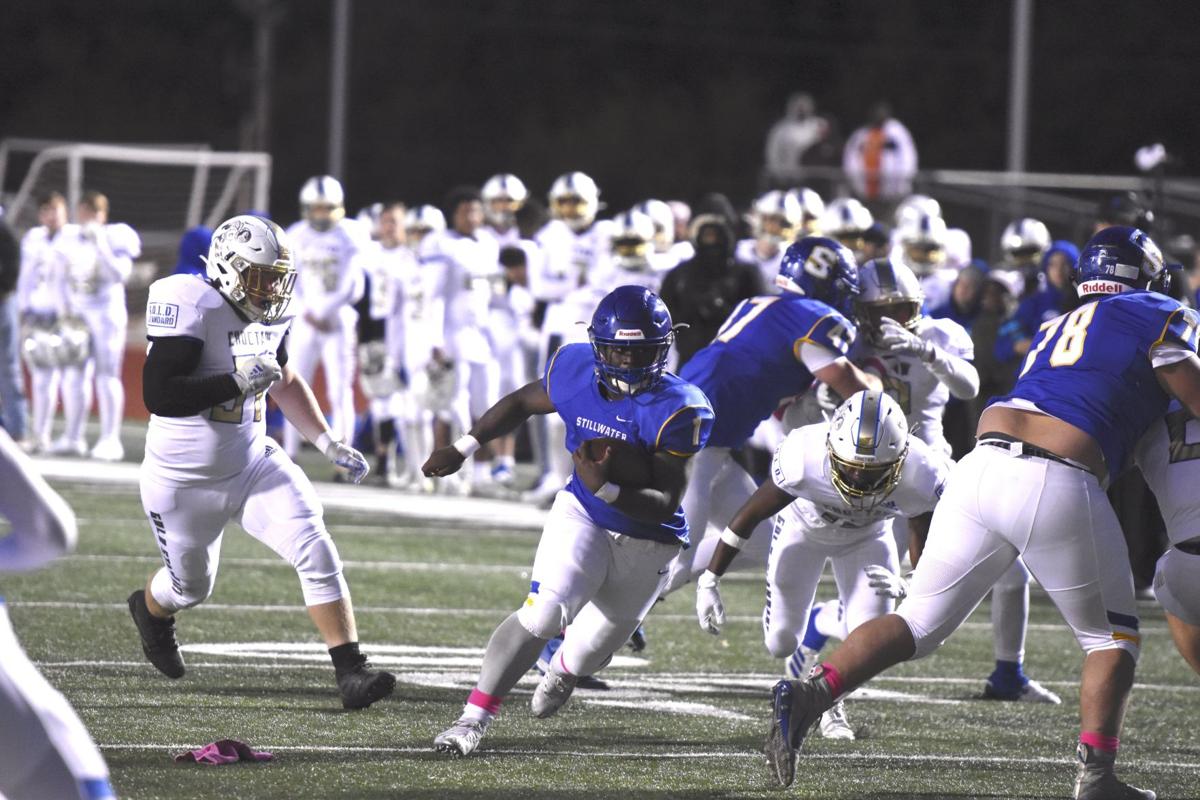 Jordan Bishop/Stillwater News Press Stillwater High junior running back Qwontrel Walker, center, rushed for six touchdowns last week and surpassed the 1,000-yard mark for the season. Walker was suspended for last year's game at Lawton, but will be playing Thursday night when the Wolverines come to Stillwater for a Class 6A-II district contest.

Jordan Bishop/Stillwater News Press Stillwater High junior running back Qwontrel Walker, center, rushed for six touchdowns last week and surpassed the 1,000-yard mark for the season. Walker was suspended for last year's game at Lawton, but will be playing Thursday night when the Wolverines come to Stillwater for a Class 6A-II district contest.

Arguably for the first time in Tucker Barnard’s tenure at Stillwater High, the Pioneers are favored to beat Lawton.

Until last year, Lawton remained a thorn in Stillwater’s side since Barnard took over as the SHS football coach in January 2011. He had yet to beat the Wolverines.

Then came an untimed down throw from quarterback Gunnar Gundy to wide receiver Anthony Bland. It capped a game-winning drive during the final minute of action, as Lawton fans sat stunned while the Pioneers celebrated on the visiting field.

“That was my first untimed down ending,” Barnard said. “I’ve lost on a two-point conversion in overtime. That wasn’t very much fun and that was the state championship game. I can’t think of a better ending that I’ve ever been a part of. It was really cool.”

A year later, Barnard recalls his first win over Lawton. It ended a six-game losing streak to the Wolverines.

“It’s not like we ran away with that game last year,” Barnard said. “It was a tough ball game and it took us until the very end to get it done.”

On Thursday night, Lawton travels to Stillwater for the first time since 2016. The Pioneers (6-0 overall, 3-0 district) are undefeated entering the Class 6A-II contest that begins at 7 p.m. at Pioneer Stadium.

Stillwater has averaged a winning margin of 45.8 points per game this season, and hasn’t allowed more than 14 points in a single contest.

“I would think this is the first time we’ve been the favorite,” Barnard said. “It’s good to be on top.”

The Pioneers are fresh off a 74-14 thumping of Choctaw last week. A quick flurry of touchdowns during the first quarter propelled Stillwater to the home victory.

After having days to think about the win and watch film, Barnard doesn’t believe the game represents Choctaw and how good of a team it is. He just said his team was locked in and focused for an opponent that usually challenges the Pioneers.

“Maybe I’m wrong, but I don’t think Choctaw is that bad,” Barnard said. “I think they could end up being third in the district. I think it was an indication of the fact that we were really locked in. Mentally, we were in as good of a place during that game as I’ve ever seen us. Our kids were performing at a really high level and didn’t make very many mistakes.”

Meanwhile, Lawton (4-2, 1-2) is coming off its first district win of the season. The Wolverines blanked Putnam City West, 42-0, last week after dropping an overtime game to Deer Creek the previous week.

“Lawton has struggled a bit and got beat by Deer Creek two weeks ago,” Barnard said. “Midwest City beat them. But, I can say all that and say that I think we’ve played them seven times in my time here and they’ve beat us six times. I’m certainly not taking them lightly and I don’t think our guys are either.”

Offensively, the Wolverines are led by quarterback Eric Wiley and running back Christian Houston. Wiley has completed 45 of 89 passes for 770 yards, while throwing six touchdowns to eight interceptions.

Chateau Reed has more than 50 percent of the team’s receiving yards. He has 22 receptions for 488 yards and three touchdowns.

Houston has racked up 697 rushing yards on just 83 carries for an 8.4 yards per carry average. He’s also scored nine touchdowns.

“They’ve continued to run the same, basic offense ever since I’ve been here,” Barnard said. “It really hasn’t changed much. They are a power offense and they’ll run inside zone, counter and a little bit of outside zone. They’ve got a quarterback who is really pretty good. They’ve got a decent running back and receiver. To me, those are their best players.”

“You hate to say this, but they don’t appear to have the same game-breaker tailback that they have always had,” Barnard said. “They’ve always had some really big-time running backs, but it doesn’t appear that it’s the case this year.”

Stillwater’s leading running back, junior Qwontrel Walker, surpassed the 1,000-yard mark last game. He has 1,0001 yards on 120 carries and 16 touchdowns this season.

“I feel pretty good about Gunnar and his ability to at least know what he’s seeing at the moment,” Barnard said. “I think offensively, we’ve got a chance to react pretty quickly to what we’re seeing.”

Thursday’s game will be the last home game until the Pioneers host Del City on Nov. 8 for their senior night contest.

“I hope we have a big crowd,” Barnard said. “It’s a Thursday night crowd. That stuff always worries you a little bit. But our kids play well here and it’s always fun when there is a big crowd out there.”