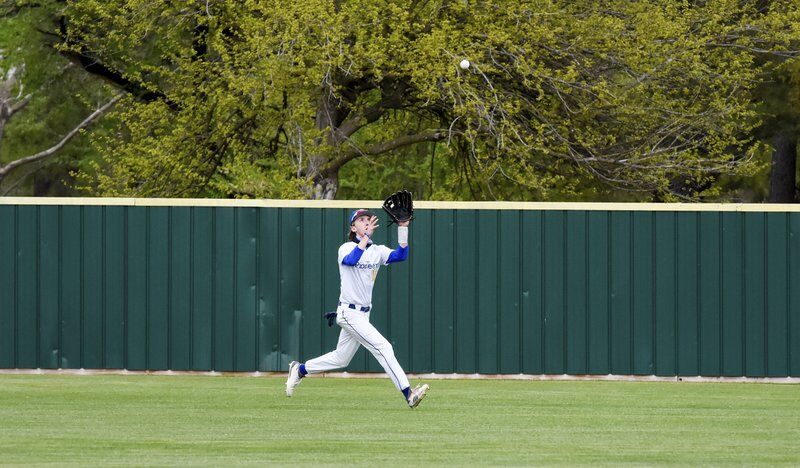 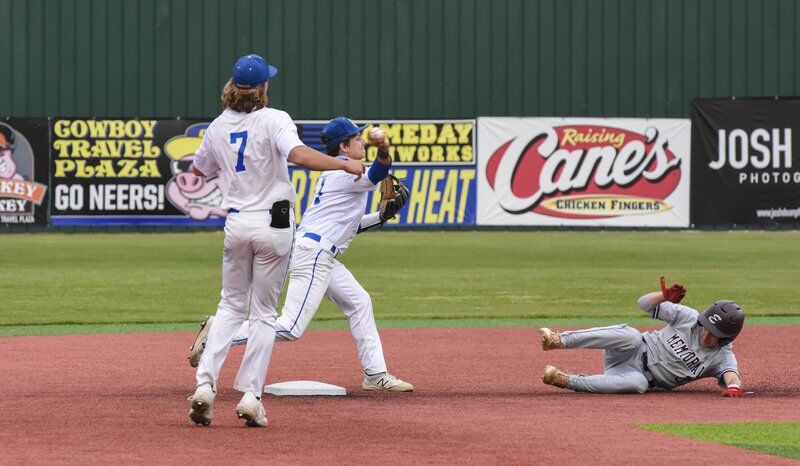 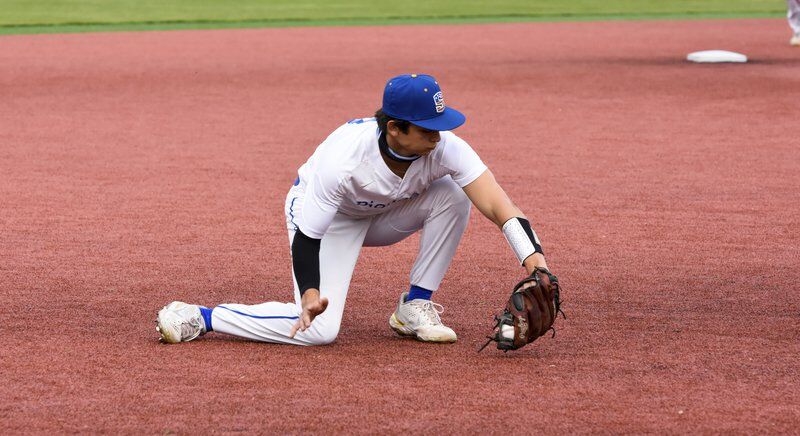 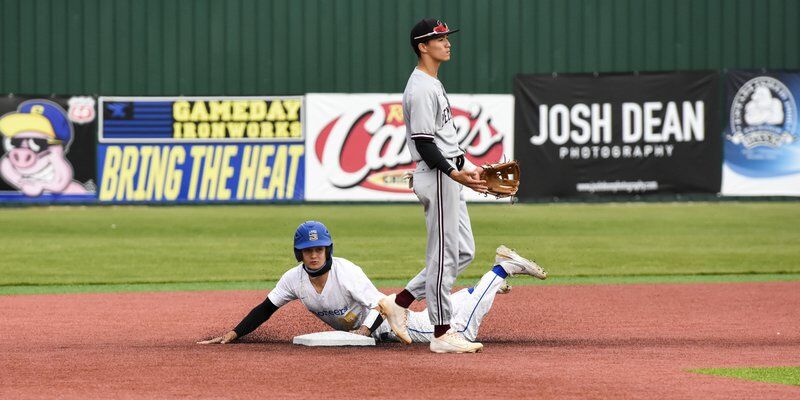 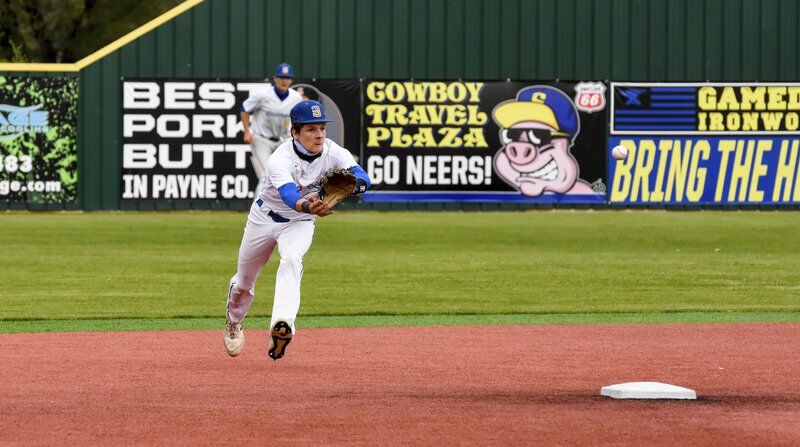 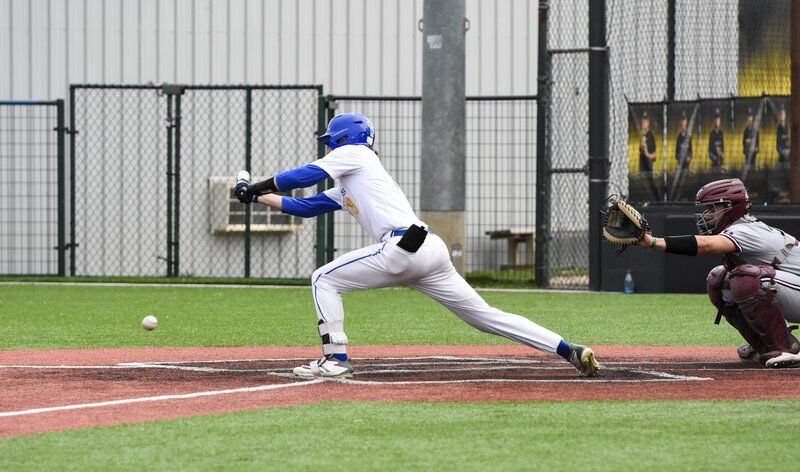 Photos by Jason Elmquist/Stillwater News Press Stillwater High’s Jaden Riley gets down a bunt for an RBI single that scored Jackson Holliday against Edmond Memorial in a district game Tuesday at Couch Park. Riley had three bunt singles in Stillwater’s 8-3 win to complete the series sweep of Memorial, which was previously unbeaten in district play. 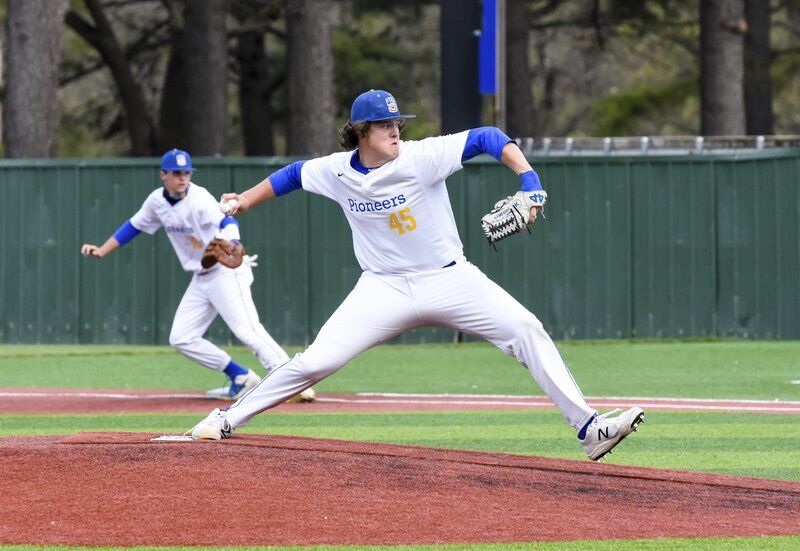 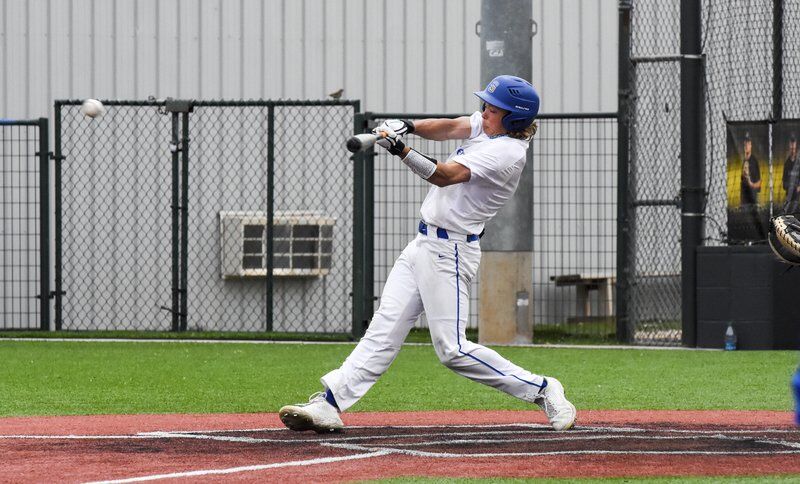 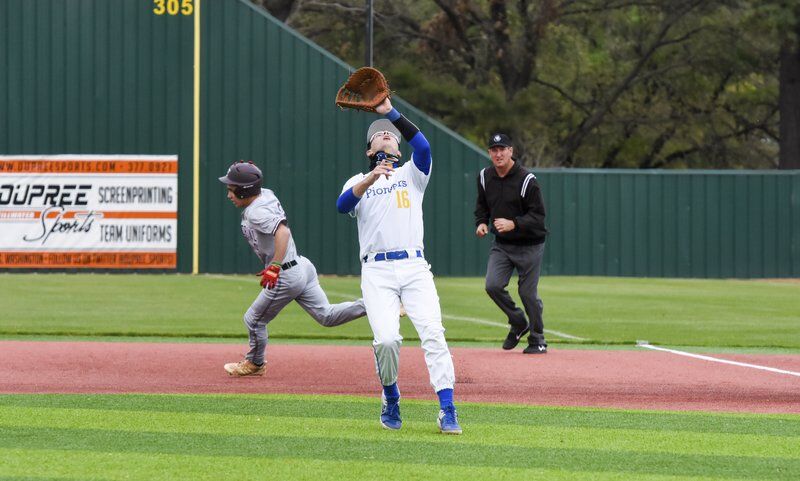 Photos by Jason Elmquist/Stillwater News Press Stillwater High’s Jaden Riley gets down a bunt for an RBI single that scored Jackson Holliday against Edmond Memorial in a district game Tuesday at Couch Park. Riley had three bunt singles in Stillwater’s 8-3 win to complete the series sweep of Memorial, which was previously unbeaten in district play.

Zach Roden’s night started rough giving up a trio of runs to Edmond Memorial, but the Stillwater High pitcher had the last laugh after his team rallied to win the game and sweep the district series.

Roden and the Pioneers shut out Memorial after the first inning. He went on to throw a complete game in the Pioneers’ 8-3 victory Tuesday night at Couch Park.

“I wanted it,” Roden said of the complete game. “With one of our pitchers getting hurt, it was really important for me to step up my game and throw really well.”

Roden allowed seven hits, and three of those came in the first inning. He retired the final eight batters he faced to earn the win.

“The last two outings, I haven’t been as effective, but today I came out and threw all of my pitches for strikes and it was really effective,” Roden said. “I don’t need to be throwing 90 miles per hour to get these guys out.”

SHS coach Jimmy Harris was proud of Roden’s outing on the mound.

“Zach Roden was a stinkin’ bulldog on the mound today,” Harris said. “He was tough. He is a stud. He is one of our big pitchers. He didn’t pitch the way he wanted to pitch last week, but he was ready for today. Today was his day. For him to get a three spot put on him and then come back and shut them out tells you what kind of guy he is. He is a stud, and I’m glad he is on our team.”

The Bulldogs (20-6 overall, 10-2 district) came out on fire in the first inning. They started the game with a single, flyout and a single before a Stillwater fielding error and a sacrifice bunt gave the visitors a 2-0 lead.

The next Bulldog at the plate hit an RBI single, pushing the lead to three runs. Despite the early deficit, the Pioneers’ hurler wasn’t fazed.

“I wasn’t really rattled,” Roden said. “I knew I could have gotten out of that inning with one run scored, but we missed a double play and (Edmond Memorial) plays aggressive. They were putting balls where we weren’t, and we kept going out there and they started hitting to our players, and started getting outs.”

It took until the fourth inning for Stillwater to score a run on Memorial’s starting pitcher Parker Coil, who is a University of Arkansas commit. It took a leadoff double by Jackson Holliday to give the Pioneers some momentum.

After a groundout moved Holliday to third, a walk and a stolen base put two runners in scoring position, Jaden Riley hit an RBI bunt single to score Holliday.

Although his team trailed early, Harris felt good about the way his team was playing, especially at the plate.

An inning later, Stillwater exploded for seven runs. It all started with an infield grounder that resulted a Memorial throwing error by third baseman Cole Adkins. Leadoff batter Isaac Szlichta took second on the play.

The Pioneers continued with a single by Owen Coil, an RBI groundout by Jackson Young and a game-tying RBI by Holliday. After another SHS single, Memorial changed pitchers but it didn’t change momentum.

“It was huge,” Harris said. “One of our goals is to keep it alive with two outs – to get a two-out hit or RBI. When you do that, it just puts a dagger into the other team.

“Gage was able to get one in the air and turn on one. He’s been doing that here lately. That’s his third one in a week and a half.”

The win came one night after Stillwater won 6-4 and handed the Bulldogs their first Class 6A District 4 loss of the season. Tuesday’s win keeps Stillwater in the hunt for a No. 1 or 2 seed out of its district, which means it has the possibility of being a regional host.

“This was big,” Harris said. “They were the No. 1 team in the district. We’re playing well, we’re locked in and we’re focused. The guys are playing the way we are asking them to play, and they’re doing it – making plays and doing what they’re supposed to be doing. I’m really, really proud of them.”

Harris said a Stillwater sweep of Bartlesville should propel his team to a regional host, as it has the tiebreaker over Memorial and Broken Arrow.

The Pioneers won’t play again until Monday when they host Bartlesville at 6 p.m.