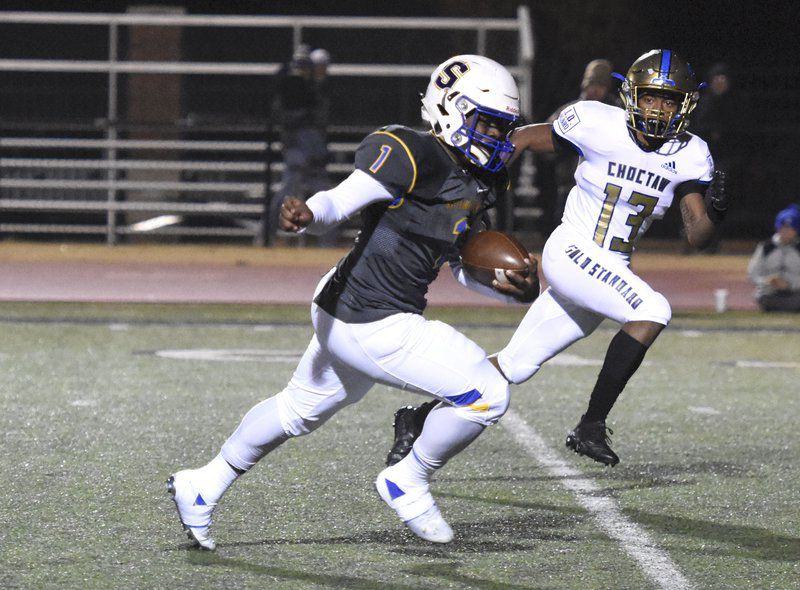 photos by Jimmy Gillispie/Stillwater News Press Stillwater High running back Qwontrel Walker runs for a touchdown against Choctaw in the Class 6A-II playoffs last fall. Choctaw will no longer be a district opponent for the Pioneers as the Yellowjackets moved to 6A-II District 2, where they will face Bixby, Booker T. Washington, Muskogee and others. 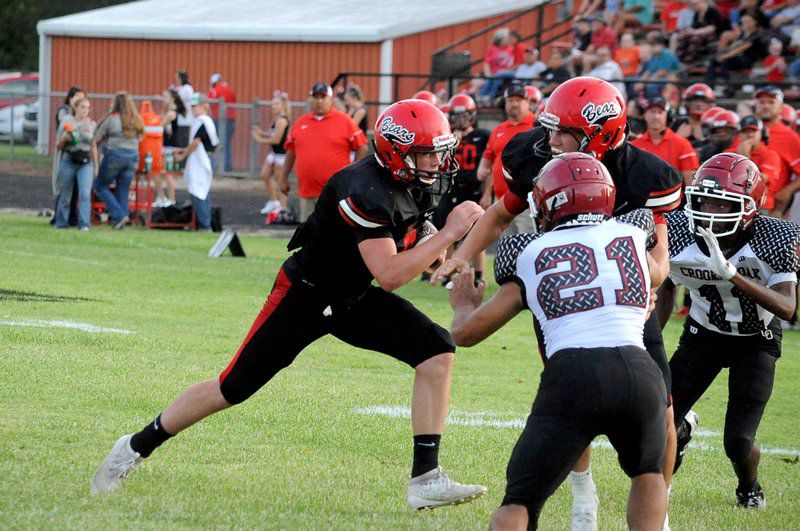 Pawnee High quarterback Blake Skidgel runs for a touchdown last fall. The Black Bears will be moving from a nine-team district in Class A to a seven-team district, where they will have three new opponents, this fall.

photos by Jimmy Gillispie/Stillwater News Press Stillwater High running back Qwontrel Walker runs for a touchdown against Choctaw in the Class 6A-II playoffs last fall. Choctaw will no longer be a district opponent for the Pioneers as the Yellowjackets moved to 6A-II District 2, where they will face Bixby, Booker T. Washington, Muskogee and others.

Pawnee High quarterback Blake Skidgel runs for a touchdown last fall. The Black Bears will be moving from a nine-team district in Class A to a seven-team district, where they will have three new opponents, this fall.

When the eight high school football teams in the News Press coverage area begin the 2020 season, they will have a change in their respective district schedules.

The new two-year districts were approved by the Oklahoma Secondary Schools Activities Association earlier this year. One of the biggest debates during the meeting came in regards to Class 6A Div. II.

There was quite a debate – heated at times – about how to divide the 16 teams in the class. Some schools didn’t want to remain in Stillwater High’s district, so SHS coach Tucker Barnard offered to go east and join the district with Bixby and Booker T. Washington.

That idea was met with resistance since Stillwater and Bixby have competed for the 6A-II state title the past two seasons. Stillwater moving east could create unbalanced districts, so other ideas were thrown around at the meeting.

In the end, Stillwater stayed in District 1 and Choctaw moved east to District 2 as it wanted out of the Pioneers’ district.

“I think in the end, that vote ended up being like 13-3 or something like that,” Barnard said “You know, I think we did a good job with the process that all of us came together, we sat down and we did I mean, it got a little heated. I mean, just different guys had strong opinions.

“But in the end, we were able to come to a consensus. I think if it would have ended up with some kind of 9-7 vote or something like, I don’t know that you would have felt as good about about the way the district turned. I think most of the guys were pretty happy the way it all shook out.”

The Pioneers’ district will retain Deer Creek, Del City, Lawton and Midwest City. Northwest Classen will be moving up from 5A into Stillwater’s district. Meanwhile, U.S. Grant will also join the district.

Sapulpa and Shawnee will be dropping from 6A-II District 2 into 5A. Putnam City will jump from 6A-II into 6A-I, while PC North will fall into the Pioneers’ district from 6A-I. PC West will go with Choctaw into District 2.

Bartlesville, Bixby, BTW, Muskogee, Ponca City and Sand Springs will stay in 6A-II District 2 during the next two-year cycle.

“We’ve scrimmaged PC North out here, you know, several years now and, and coach (Ryan) Laverty is doing a good job,” Barnard said. “I’m excited about buying those guys. It’s a good football team, and he’s got things rolling over there. I think you can probably see from our from our non-district schedule that we were happy to schedule tough. So, I think having them come down strengths the district.”

Overall, Barnard is pleased with his team’s new district. It will keep the traditional powerhouses like Del City, Midwest City and Lawton for at least the next two years.

“I’m glad to keep those guys,” Barnard said. “That’s real quality opponents and we feel like we’re in a position that we want to play really good teams. We want to win them all, for sure, but I think a decision that we’ve made or kind of come to is – and this goes all the way back to my days at Shiloh (Christian) where you where you feel like it’s OK if you lose a game to quality opponent, as long as you know that it’s helping you prepare yourself for later on down the road.

“So, we’re excited about playing good teams and there’s a bunch of good ones in there. The Choctaw move into the to the east district – that was a thing that they just did to try to balance things out with Sapulpa leaving, which was a playoff team, so the west side district felt like they needed to replace a playoff team over there.”

The other seven teams in the News Press area will also have new district opponents to go along with familiar faces. In Class 4A, Cushing is coming off its second-straight playoff appearance in Class 4A, despite a losing regular season record.

The Tigers will still be in 4A District 2 for the next two years, but they will have three new district foes in Ada, Classen School of Advanced Studies and John Marshall. Bethany will move to District 1, while Madill and McLoud will drop to 3A. Bethany was the District 2 champ last fall.

With John Marshall leaving its Class 3A District, Perkins-Tryon will lose one of its biggest opponents. Mannford and Blackwell will also be leaving the Demons’ district.

They will add Anadarko from 4A, Douglass from 3A District 2 and McLoud. P-T has been playing McLoud in nondistrict action already, winning 30-7 last fall.

Perry will be adding rival and former P-T district foe Blackwell to its Class 2A District 1 slate. The battle of Maroons will now have playoff implications. That’s the only change to Perry’s district.

Meanwhile, Morrison and Pawnee will have new district opponents in Class A. Both teams will be moving from a nine-team district to a seven-team one without three playoff teams from the past two years.

“It is what it is,” Morrison coach Cory Bales said. “We’ve been in a seven-team one before, and sometimes it’s kind of nice. You play four games and then you start district play, so after four games, you should have things figured out where you want to and who you want to play. It has its good and bad.”

Morrison and Pawnee will be in District 5, along with familiar foes in Hominy and Woodland. They will be adding Caney Valley, Chelsea and Chouteau-Mazie to the district.

Pawhuska, Barnsdall, Tonkawa and Drumright are no longer district opponents. Pawhuska stayed in District 5 and Tonkawa moved to District 3, while Barnsdall and Drumright dropped to 8-man football in Class B.

“I really like it,” Bales said. “It’s going to be kind of neat to play some new people. We still have our other guys in there. We kept three of our old ones and added three new ones. We will be pushed a little east, but it will be a lot of fun. We’re really looking forward to it.”

“We’ll still play Tonkawa in nondistrict. Then we pick up those teams in the east. It’s three new teams that we’ve never played. Obviously, we’ll still have Pawnee, Woodland and Hominy in there. We have four nondistrict games this year in that dadgum seven-team district. I hate all of that, but we found some 2A schools to play.”

Yale will be facing Barnsdall in Class B District 7. The Bulldogs will keep district opponent Olive while adding Covington-Douglas, Garber and Pioneer-Pleasant Vale. Yale will no longer face Davenport, Depew, Prue and Wesleyan Christian in district action.

Covington-Douglas was an opponent for Coyle in Class C, but the Bluejackets will be moving to District 4. Coyle’s district foes will be Bowlegs, Graham-Dustin, Maud, Midway, Oaks Mission, Sasakwa and Wilson (Henryetta).