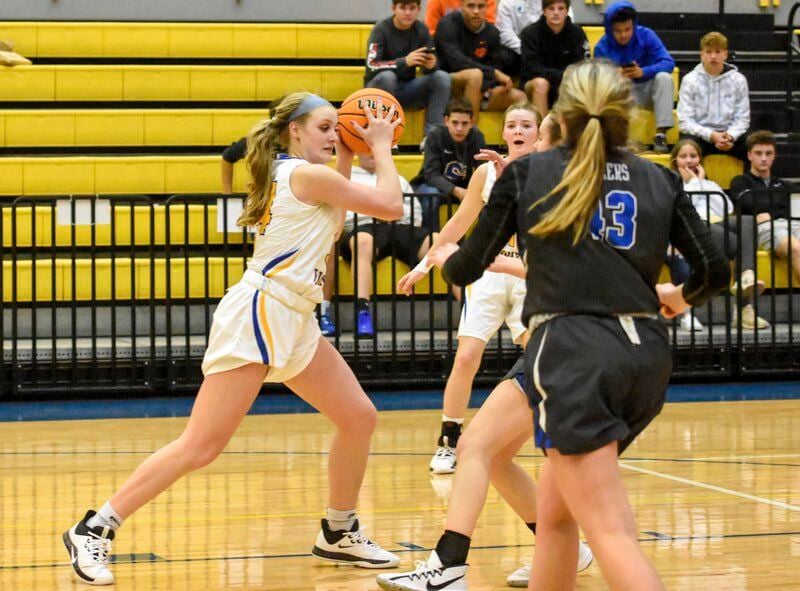 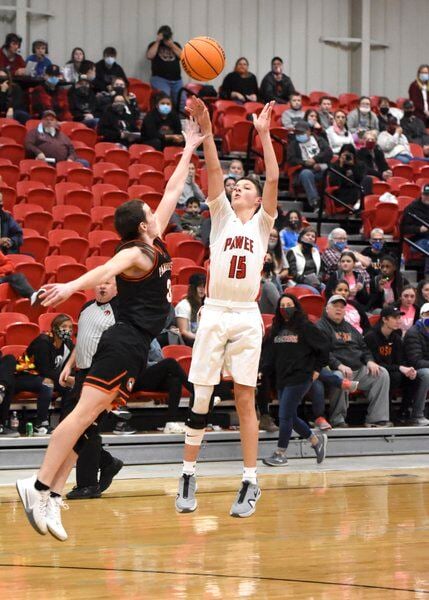 Jimmy Gillispie/Stillwater News Press Pawnee High junior guard Gunnar Gordon (15) attempts a guarded 3-pointer during Saturday’s championship game of the Mike Kerr Classic in Morrison. Pawnee improved to 7-0 with a 47-42 win over Pawhuska in the title game, winning the tournament for the second-straight year.

Jimmy Gillispie/Stillwater News Press Pawnee High junior guard Gunnar Gordon (15) attempts a guarded 3-pointer during Saturday’s championship game of the Mike Kerr Classic in Morrison. Pawnee improved to 7-0 with a 47-42 win over Pawhuska in the title game, winning the tournament for the second-straight year.

Claudia Vanzant was a force Del City couldn’t stop Saturday afternoon in the fifth-place game of the Bartlesville Tournament.

The Stillwater High senior scored 13 points in the team’s 61-40 victory, while also grabbing 19 rebounds. Those 19 boards set a new school record for rebounds in a single game at SHS.

Additionally, Vanzant blocked five shots, which tied the program’s single-game record. All 13 of her points came at the foul line, where was 13 of 16.

The Lady Pioneers (3-2) made 29 of 43 from the free throw line as they combated an aggressive Del City defense that sent them to the charity stripe a lot all game.

“Del City is a physical team that likes to full-court press and jump trap,” SHS coach Kendra Kilpatrick said. “Traditionally, we have struggled with teams like that, but the girls did a great job of handling the pressure really well. Jayden (Mason) had just one turnover and Chrissen (Harland) had two against an extremely high-pressure defense that usually bothers us. We became the aggressor and they weren’t able to do what they wanted to do.”

Mason led Stillwater with 20 points – one shy of her Friday night total – and grabbed seven rebounds, landing her a spot on the all-tournament team. Harland scored 18 points and grabbed nine boards in the win.

SHS played only two games in the tournament – both in the consolation side of the bracket. Kilpatrick talked to the tournament organizer who allowed her to basically forfeit the first-round game Thursday without taking a loss. Since they were able to resume playing basketball Friday after dealing with quarantine issues, the Lady Pioneers didn’t have to exit the tournament.

They played in the tournament missing six seniors, but left with two victories. Kilpatrick credits her three star players, but also said the rest of the team was crucial in both wins.

“The rest of the team filled in and played their role extremely well,” Kilpatrick said. “Jenna Brunker played 23 minutes and filled her role. Mackenzie Martin was the other starter and played 23 minutes, too. She had a career high for varsity. Kylie Prichard hit a 3 and it was huge for us at the end of the third quarter.”

Prichard’s 3-pointer is one Kilpatrick has watched many times since Saturday’s game. With time winding down, Vanzant bobbled a pass before passing the ball out to Prichard for the shot.

“I’ve watched that probably 10 times,” Kilpatrick said. “It was so much fun. Obviously, you’re excited for her, which was her first career varsity points, but it was so fun to watch the bench jumping up and going crazy, along with some of the fans and the girls on the court. It’s been special watching it over and over.”

The Lady Pioneers will have three games this week, and two of those were postponed from December. They will travel to Edmond Santa Fe on Tuesday before hosting Southmoore on Friday. Both of those game will start at 6 p.m.

“We have three or four games a week for the next couple weeks,” Kilpatrick said. “We’ll play when we can play, so we’re trying to get them all scheduled so we can play.”

After going 3-1 in December, the Stillwater High boys’ team has started the new calendar year 0-4. The Pioneers (3-5) lost all three games at the Bartlesville Tournament last week after falling at Westmoore earlier in the week.

The Pioneers will travel to Edmond Santa Fe on Tuesday before hosting Southmoore and Yukon on Friday and Saturday, respectively.

In the third-place game, Morrison beat Hominy, 79-43, improving to 5-2 on the season. The Wildcats fell to Pawhuska, 38-35, in the semifinals Friday night.

The Frontier boys’ team (3-6) capped its tournament with a 46-32 win over Tonkawa in the seventh-place game.

The Morrison High girls’ team fell to Preston in the title game of the Mike Kerr Classic on Saturday night. The Lady Wildcats (4-2) lost 39-27.

The Ripley High boys’ team capped its home tournament with a runner-up finish Saturday night. The Warriors (10-4) fell to Prague, 62-49, in the championship game. Prague is ranked No. 14 in Class 3A.

The Glencoe High girls’ team lost two close games in the championship side of the Medford Tournament bracket. The Lady Panthers fell to Medford, 43-36, in the semifinals, before losing to Covington-Douglas, 42-38, on Saturday.