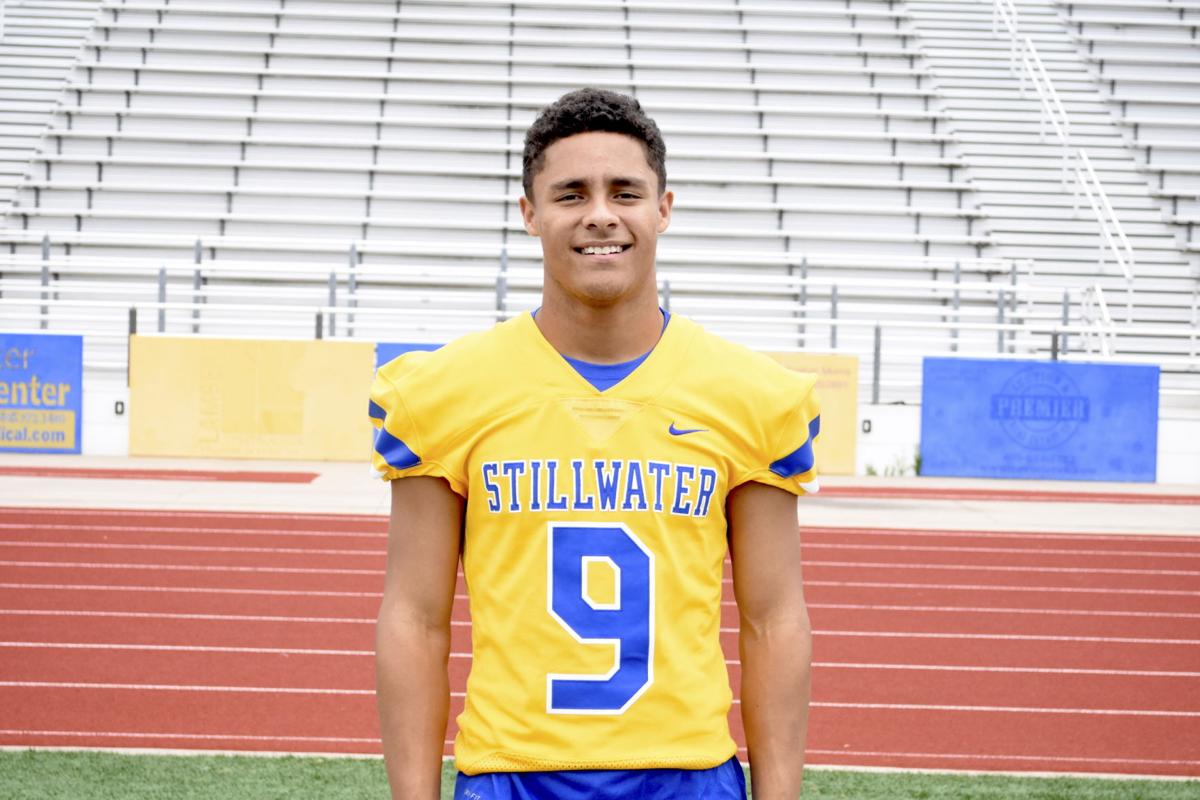 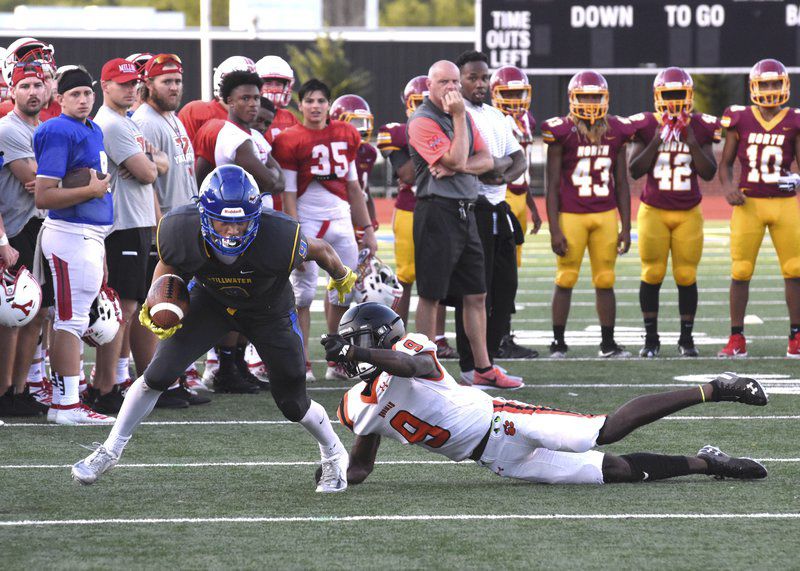 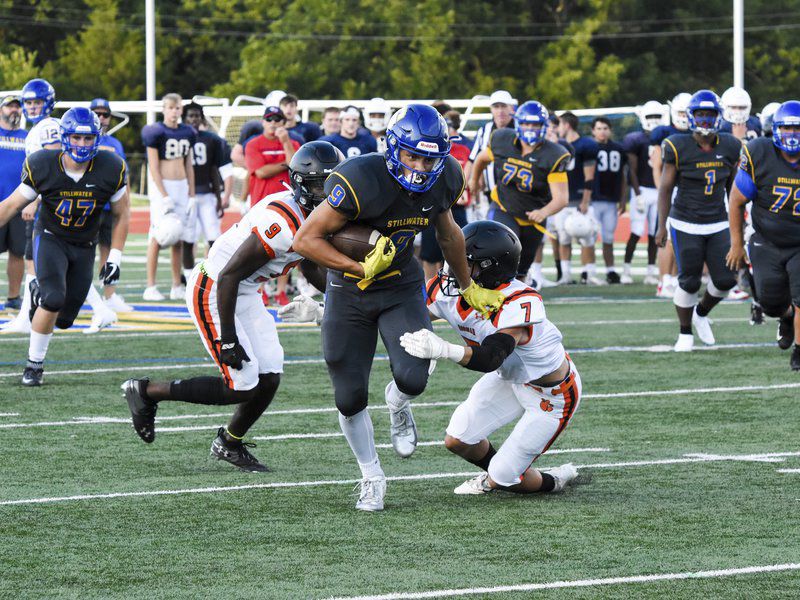 Jason Elmquist/Stillwater News Press Stillwater High senior wide receiver Anthony Bland has been a star wherever he has played, whether it is with the Pioneers or back when he was in San Diego, California. Because of his talent and ethic in the classroom, as well, Bland is committed to play at Princeton University in the prestigious Ivy League. 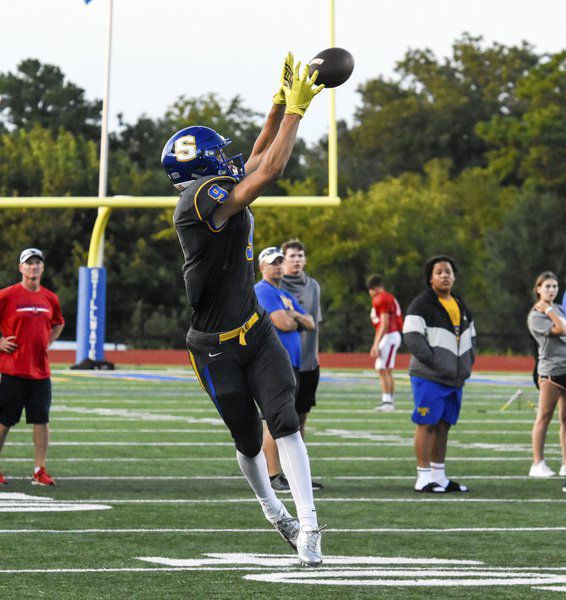 Stillwater High senior wide receiver Anthony Bland joined the Pioneers prior to his junior season and instantly was an impact on the field.

Jason Elmquist/Stillwater News Press Stillwater High senior wide receiver Anthony Bland has been a star wherever he has played, whether it is with the Pioneers or back when he was in San Diego, California. Because of his talent and ethic in the classroom, as well, Bland is committed to play at Princeton University in the prestigious Ivy League.

Stillwater High senior wide receiver Anthony Bland joined the Pioneers prior to his junior season and instantly was an impact on the field.

He played football in seventh grade, but didn’t go out the next year. Bland returned to the gridiron as a freshman at La Jolla Country Day School, but wasn’t sure it was a sport he wanted to continue playing.

His feelings and enjoyment of the sport changed as his freshman season prolonged. Bland’s role on the team increased, but his squad lost the state championship.

“If I went to a bigger school my freshman year, I don’t know if I’d still be playing football right now,” Bland said. “I didn’t like it that much. It was kind of, whatever. Toward the end of the season and into the playoffs, I started getting thrown in and I ended up starting on our team in the championship game my freshman year. We lost the game, so that same fuel and anger got to me. That summer, my workout routine was something ridiculous.”

He’s enjoying football so much he’s committed to playing at prestigious Princeton University in the Ivy league. He committed months ago, and that hasn’t changed as he’s about to enter his final season as a high school athlete.

Bland is excited about moving to Princeton, New Jersey, next year where he plans to possibly study civil engineering or architecture. He said his mother, Patsy Armstrong – who works at Oklahoma State University as Cowgirl basketball’s director of operations – is also excited about her son pursuing his passion, despite it being halfway across the country.

“She would rather see me get out of here and go where I want to go than stay in Stillwater,” Bland said. “She wants me to take advantage of those opportunities.”

Football has made those opportunities possible. A few years ago, Bland might have wanted to continue his athletic career playing lacrosse or basketball. Yet, he’s come close to winning a state championship twice on the gridiron.

Losing those title games, especially the latest one, still stings with the Stillwater High wideout. Bland and the Pioneers’ lone loss last fall was in the Class 6A-II state title contest to Bixby, which has won four of the five 6A-II titles.

“In the back of our minds, we’re always angry. We lost and we came up short. With that, comes being more mad in the weight room and on the field. Everything we do, it feels we put more into it than we did last year, because it feels like we have something fueling us.”

In last year’s title game, Bland was held to five catches for 45 yards. That, along with losing the game and coming so close to the illustrious state title, has him fired up and ready for his senior season.

Bland admitted individual success is something he strives for, but the team success is more important. He was held to a single catch in two games a year ago.

It took time for him to realize Stillwater’s offense was different from the pass-happy one he ran at Country Day. Stillwater also relies heavily upon tailback Qwontrel Walker.

It’s been an adjustment for the highly-touted receiver.

“At first, it was kind of upsetting to me,” Bland said. “The first game, I had like five catches and I thought that would be the least I had all year, because at Country Day, I averaged about 12 or 13 a game. I was a little upset at first and it was kind of hard to get over, but then I realized I had to do what’s best for the team. Those couple games where I had only one catch, besides the Bixby one, we won those games. I have to trust the coaches, because what they did was right.”

One of those single-catch games came against Booker T. Washington and star defensive back Daxton Hill, who’s beginning his freshman year at Michigan. Bland caught one pass for seven yards in the state semifinal win.

Nine months later, Bland opened up about the matchup, how he wished for more touches and how he was able to combat Hill’s speed.

“I wish they would have trusted more against Dax Hill,” Bland said. “There were times we saw on film where I could have gotten the ball, but they didn’t want to test him. He’s a great player, so that makes sense.

“There weren’t many times I was able to run a route, because I was being a decoy. It was a little annoying, because I had to pretend like I was going to run a route. I’ll be honest, if i was running a go route, I wasn’t open, but the things I was breaking on, I was getting open. It was kind of hard reading things, but it is what it is and we still won the game though.”

Although it was a bit frustrating not being a bigger part of the offense, Bland used the battle with Hill to combat other defensive backs who are faster than him.

“Ever since then, when I go one-on-one with someone, it’s easier,” Bland said. “With him, he would play so patiently because he’s so fast. He would let you get off the line and then he would catch up. Now, I’ve gotten used to guys being faster than me, but not as fast as him, so it’s easier to mess with guys and use their speed against them.”

Bland has come to terms that he isn’t the fastest receiver. But, he’s confident in his ability to run sharp routes and catch nearly every single pass, so faster opponents don’t intimidate him.

“I’ll always be knocked for my speed and it doesn’t phase me,” Bland said. “I’m fast enough. I went to The Opening and didn’t lose a one-on-one against all of these guys who run 4.4’s. I’ve proven I can beat these guys that are faster than me using what I have, so I’m not really worried about it. I know I won’t get some of the offers these 4.4 guys get, but it’s OK, I’m not worried about it.”

Bland has actually become good friends with one opponent who might be one of those “4.4 guys” in Bixby’s Brennan Presley, a speedy receiver who is committed to OSU. The two talented wideouts met during a camp at OSU and began talking.

The friendship continued to grow as they were teammates on a 7-on-7 team. They’ve even met up to play catch, and their friendship has grown close during a short time, according to Bland.

“It’s kind of weird, because they are our rivals and the team we want to beat for the state championship, but he’s like my closest friend out of anyone that doesn’t go to Stillwater,” Bland said. “It’s weird going against him, because I want to beat him, but he’s also my friend.”

He even had no qualms about expressing Pressley’s level of talent.

“I think he’s arguably the best player in the state on both sides of the ball,” Bland said.

Bland also believes he has one of the best players in the state throwing him the ball in SHS senior quarterback Gunnar Gundy. The two players become good friends last year once Bland moved to town, and their chemistry and friendship has blossomed during the past 15 months.

“Last summer, we were throwing with each other about every day,” Bland said. “That’s how it kind of got built. From last season to now, there are routes I have to sit in zones and he knows where I’m sitting, because he’s thrown to me so much. You can tell he knows where I’m going before I even sit down in the zone.”

“I’ve only known him for less than two years, but it honestly feels like 10,” Gundy said. “I kind of have a connection with him mindset wise, because I can see what he’s doing. He’s a great player.”

While he wouldn’t say there is a specific signal between the two during games, Bland admitted they’re nonverbal communication is quite in sync. Their intelligence, especially on the football field, is one big reason for it.

“Mostly, it’s about being smart,” Bland said. “I have to see where the defense is and he has to see the defense, as well, and he knows where he needs me to sit. Also, he knows where I like to sit, so he always has the ball ready to throw it, because he knows at any point, I’ll sit down.

“There’s not a look, but I can tell sometimes by how big his eyes are what he wants to do on the play.”

Now, he’s anxious to show the rest of the state what the Pioneers have in store this fall. Stillwater opens the season at 7 p.m. Friday at Edmond Memorial.