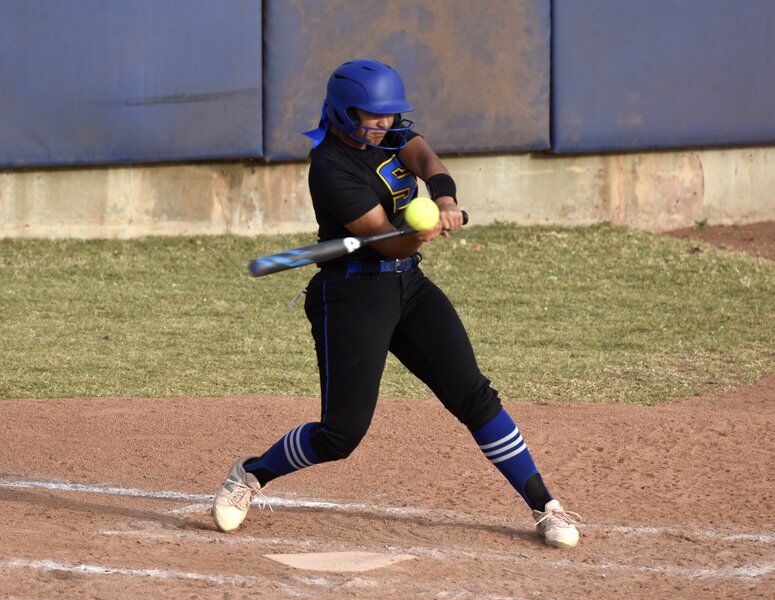 Stillwater High junior Lyric Perry hits an RBI single during the first inning of Thursday’s game at the Class 6A state tournament at the USA Softball Hall of Fame Complex in Oklahoma City. Perry went 3 for 3 at the plate in the 4-3 loss. 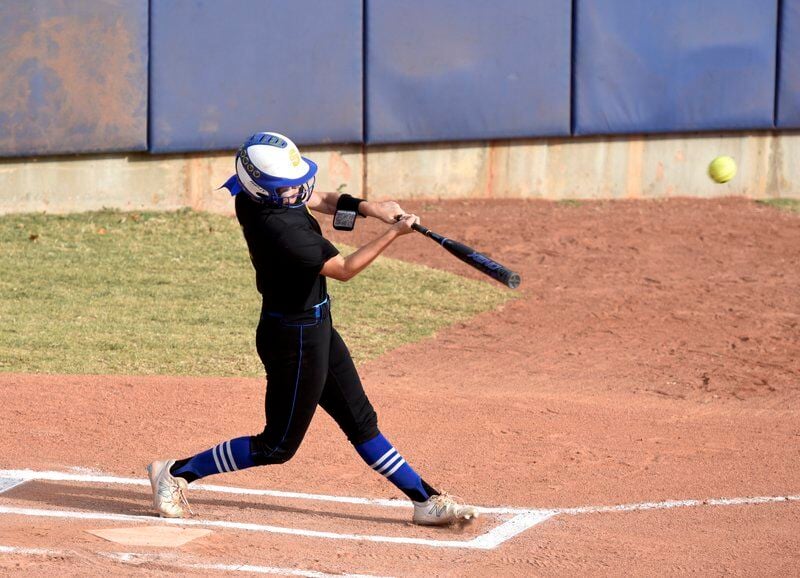 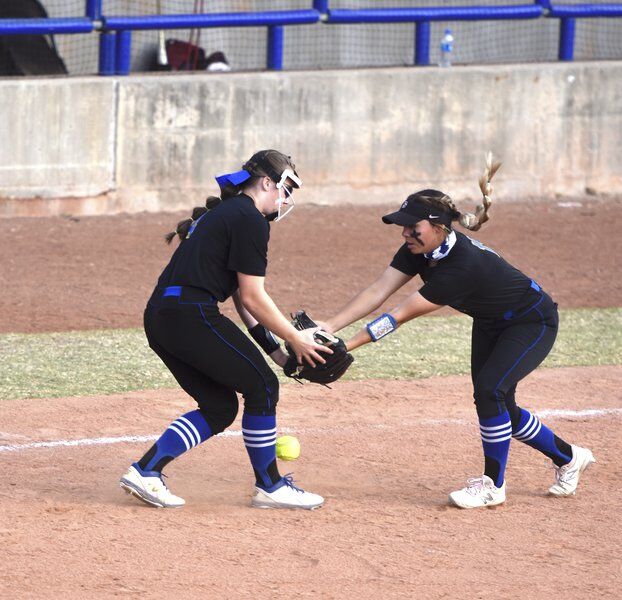 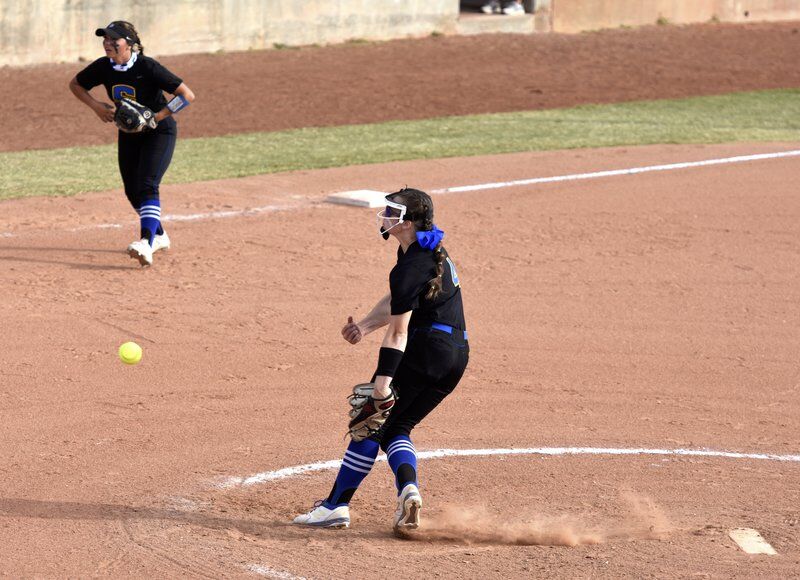 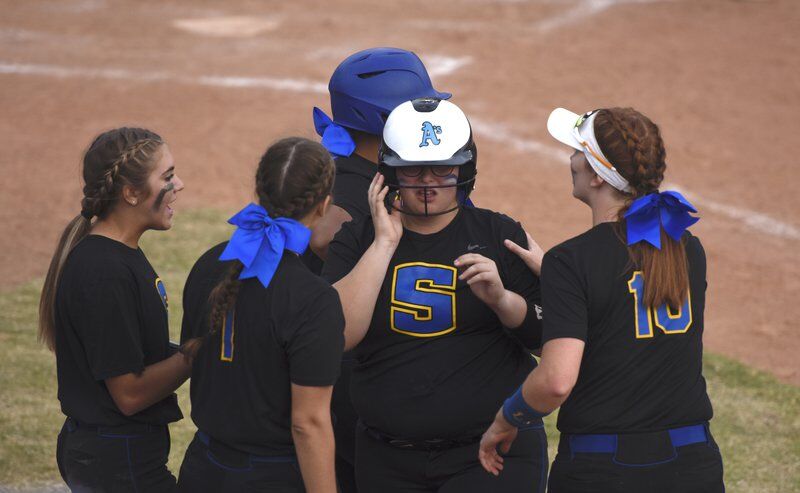 Photos by Jimmy Gillispie/Stillwater News Press Stillwater High sophomore Madison Blankinship, center, is consoled by her teammates after she popped up for the final out of Thursday’s game at the Class 6A state tournament at the USA Softball Hall of Fame Complex in Oklahoma City. Stillwater fell to Edmond Memorial, 4-3, ending its season. 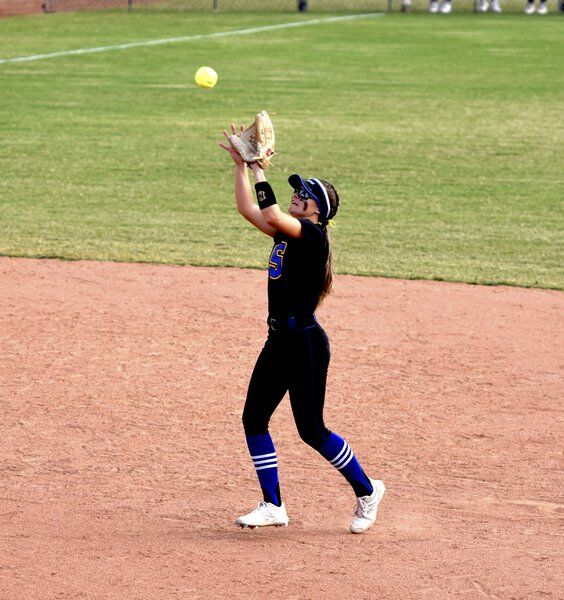 Stillwater High junior Lyric Perry hits an RBI single during the first inning of Thursday’s game at the Class 6A state tournament at the USA Softball Hall of Fame Complex in Oklahoma City. Perry went 3 for 3 at the plate in the 4-3 loss.

Photos by Jimmy Gillispie/Stillwater News Press Stillwater High sophomore Madison Blankinship, center, is consoled by her teammates after she popped up for the final out of Thursday’s game at the Class 6A state tournament at the USA Softball Hall of Fame Complex in Oklahoma City. Stillwater fell to Edmond Memorial, 4-3, ending its season.

A dropped infield pop-up started a chain of events that resulted in a throw to second base that stopped when it hit the outfield fence, allowing two Memorial runners to score and take the lead.

Despite the miscue, Stillwater had a chance to tie or take the lead in the final inning. However, the Lady Pioneers left the bases loaded, falling to Memorial 4-3 in the Class 6A state tournament at the USA Softball Hall of Fame Complex in Oklahoma City.

“Just one little mistake,” Linsenmeyer said. “I thought we were quite possibly the better team. I felt like we were hitting the ball and Makenzi Swick pitched the ball well. We were doing everything right, and it just came down to one little mistake. It happens at all levels. I’m sad and my heart is broken for them, but I’m still proud.”

Both teams scored two runs early before three scoreless innings. In the sixth, the middle part of Stillwater’s lineup delivered the go-ahead run. Sophomore Madison Blankinship hit a one-out bloop to shallow left field for a single. Junior Lyric Perry followed with a single to deep center field, advancing freshman Camryn Westbrook, who ran for Blankinship, to third base.

SHS junior Makenzi Swick came up next and delivered the sacrifice fly to score Westbrook and give Stillwater a 3-2 lead over the defending state champ.

In the bottom of the inning, Memorial hit a one-out single before a walk put two runners on base. The following batter hit a pop-up down the third base line, and with the wind blowing out, it caused some issues.

SHS freshman third baseman Addyson Brown nearly made the catch, but Swick – the Lady Pioneers’ pitcher – collided gloves with Brown. They briefly bobbled the ball before it hit the dirt. Brown composed herself, picked up the ball and ran to third base for the force out and second out of the inning.

Just when it looked like disaster was averted, Brown eyed a Memorial runner caught between second and third, and she threw to second base hoping for the tag out. Unfortunately, the throw sailed into the outfield and the ball rolled to the fence. By the time the ball was gathered and thrown back in, two runs had scored and Memorial led 4-3.

“It’s just what it was,” Linsenmeyer said. “I’m super proud of them. It’s just how the game is. You can’t fault a kid for giving their best effort.”

Stillwater came to the plate and forced some late-game drama in the top of the seventh inning. Junior Kendyl Prichard recorded her first hit of the day on a single to center field. Sophomore Kaylee Linsenmeyer followed with a fielder’s choice where she reached first, but Prichard was out at second.

Senior Alex Griffin hit a bunt single on the ensuing at-bat before junior Sidney McLaughlin was walked, loading the bases with one out. The final two at-bats resulted in a strike out and an infield pop-up to end the game.

“We got bases loaded in the top of the seventh,” Linsenmeyer said. “What else can you do? Just keep fighting.”

Stillwater jumped out to a 2-0 lead in the first on a Griffin walk, a double by McLaughlin and an RBI single by Brown. Two batters later, Perry hit an RBI single to score McLaughlin.

The Lady Pioneers’ dugout was buzzing after taking a 2-0 lead on Memorial.

“I just watched,” Linsenmeyer said. “You just watch and you put the kids in the right places, and let them do what they do. I just wish they would play like that all the time, but better now than never. If I could get them to play at that level more often then we would be even a bigger threat in 6A softball.”

Memorial tied it up in the second with three doubles – two of which came with two outs recorded. Those were three of the five hits allowed by Swick in the circle. She also struck out four batters in the loss.

“I wish we could have that one inning back a bit,” Linsenmeyer said. “She figured it out and she was using both sides of the plate. She was using her changeup and we threw some rise balls. She is just getting better and better. Now, let’s keeping better and let’s work to make her even better. The same goes for Kendyl Prichard. She is a good pitcher on her end, as well. We’re going to be back with those two kids and we’re just going to grind it out again.”

Memorial advances to play either Osasso or Shawnee on Friday. Stillwater finished its season with a 20-17 record.