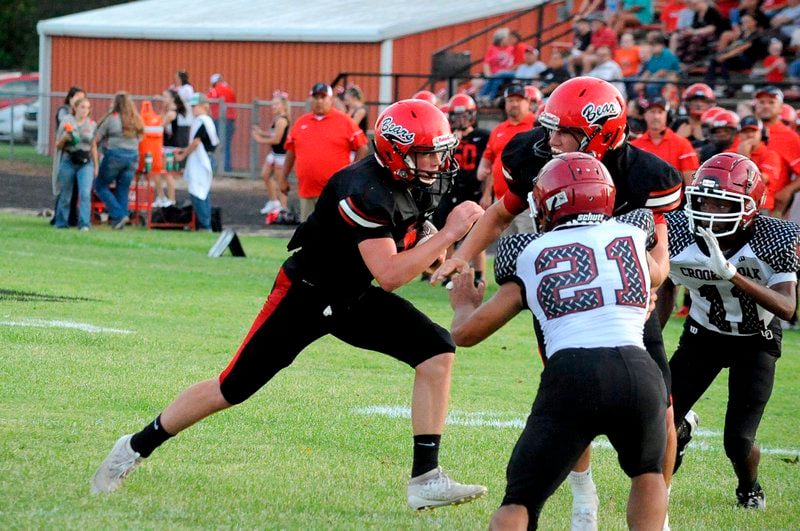 Jimmy Gillispie/Stillwater News Press Pawnee High junior quarterback Blake Skidgel, left, runs for a touchdown during the Black Bears' season opener at Memorial Field. Pawnee will host Mangum at 7 p.m. Friday in the Class A state quarterfinals. It will mark the third-straight home playoff game for Pawnee this season. 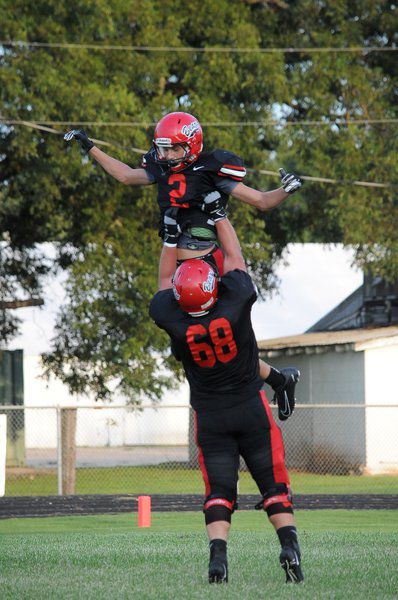 Jimmy Gillispie/Stillwater News Press Pawnee High senior lineman Zac Buchanan (68) lifts sophomore running back Jake Mitchell into the air during the Black Bears' season opener at Memorial Field. Pawnee will host Mangum at 7 p.m. Friday in the Class A state quarterfinals. It will mark the third-straight home playoff game for Pawnee this season.

Jimmy Gillispie/Stillwater News Press Pawnee High junior quarterback Blake Skidgel, left, runs for a touchdown during the Black Bears' season opener at Memorial Field. Pawnee will host Mangum at 7 p.m. Friday in the Class A state quarterfinals. It will mark the third-straight home playoff game for Pawnee this season.

Jimmy Gillispie/Stillwater News Press Pawnee High senior lineman Zac Buchanan (68) lifts sophomore running back Jake Mitchell into the air during the Black Bears' season opener at Memorial Field. Pawnee will host Mangum at 7 p.m. Friday in the Class A state quarterfinals. It will mark the third-straight home playoff game for Pawnee this season.

It just needs a third-straight home win to clinch a spot in the semifinals, which will be played at a neutral site.

The Pawnee High football team has dominated a pair of home playoff games, but needs to win a third one to reach a height it hasn’t since its 2004 state championship run.

The Black Bears (12-0) host Mangum at 7 p.m. Friday at Pawnee Memorial Field in the Class A quarterfinals.

“It’s something special to stay at home and play at home,” said Cook, the sixth-year Pawnee coach. “We do have a home-field advantage of some sorts, based on our fans. Our community is backing us right now and it’s a good thing. This is an awesome feeling.”

Pawnee ended its regular season with a pair of home district games. The Black Bears won both to clinch the district title.

Since then, they’ve been at home and haven’t left town. The Black Bears will have to leave Pawnee next week if they play Cashion or Barnsdall in the semifinals.

Needless to say, the Pawnee fanbase is excited for another home playoff game at what will likely be a packed stadium.

“It’s going to be a great game Friday night and everyone is looking forward to it in Pawnee,” Cook said.

“We’re just going out and focusing on us. There isn’t any pressure on us. We’ve played good up to this far. We don’t have anything to lose, so we’re going to go out and play hard each and every week. Every week, we go one step further and it makes it even better.”

Weather could play a factor Friday night. It will be the first time during the postseason that it could be an issue.

The forecast calls for a cold, wet night. Friday’s high temperature is in the low 50s. There’s a high chance of rain all day.

A frigid, soggy night could create a muddy field. If so, that could benefit Pawnee’s offense. The Black Bears are primarily a running team which will ground and pound opponents without needing to pass.

“We’ve got some tough, gritty kids and we like the rain and we like the cold,” Cook said. “Our offensive style matches our kids well. We’re looking forward to Friday night and we’ll go play in whatever weather we’ve got.”

Pawnee junior quarterback Blake Skidgel has only thrown 20 passes this season. He’s completed 15 of those for 364 yards and 10 touchdowns.

Meanwhile, Skidgel has rushed for 989 yards, including 231 yards in last week’s win over Wayne. Trevor Mitchell leads the Black Bears with 1,429 rushing yards and 16 touchdowns.

“There’s not one guy who is a superstar,” Cook said. “It’s kind of all those guys picking each other up and being good teammates.”

Additionally, Chad Mitchell, has carried the ball 44 times for 442 yards and five touchdowns in just six games. His first game was Week 6, because he was recovering from a non-football injury he suffered before the 2018 season.

“He was battling an injury he held over from last year,” Cook said. “He’s happy to be back, so his attitude has been great.

Mitchell, a senior and older brother to Trevor, had to miss last week’s game after being ejected the previous game. But, he’s back for Friday’s contest.

“It was unfortunate that we lost him last week for the targeting penalty,” Cook said. “However, it’s one of those things where he learned his lesson and he gets to come back and play this week. He’s excited and he’s had a really good week of practice, as well.”

Mangum is led by senior quarterback Colton Laughlin. He’s completed 64 percent of his passes for 2,990 yards for 28 touchdowns and eight interceptions.

Laughlin has also rushed for 716 yards and 10 touchdowns this season. Bnard Bailey is Mangum’s leading rusher, carrying the ball 116 times for 1,140 yards and 11 touchdowns.

“They’re very athletic, very talented kids,” Cook said. “They throw about 55 percent and run 45 percent of the time. They have a very good counter power quarterback run game. They have a lot of athletes, and senior-led athletes at that.”

Although it’s a holiday week with limited days of school, the Black Bears have kept their practice schedule as close to normal as possible. They even met on Thanksgiving for their weekly final practice before the game.

“Whether it’s rain or shine, we’re going to get out there and have a walk through,” Cook said. “We’ve been telling the kids from day one that if you get to practice on Thanksgiving, it’s something special. Our kids are bought in and everyone has been there all week long.”

“Coach (Daniel) Kendle always says, ‘If you’re not having fun, then why are we doing it?” Cook said. “We’ve been having fun each and every week. Sometimes coaches make it a bit more stressful than we have to, but overall the kids seem to be having a good time and that’s what is important out there.”