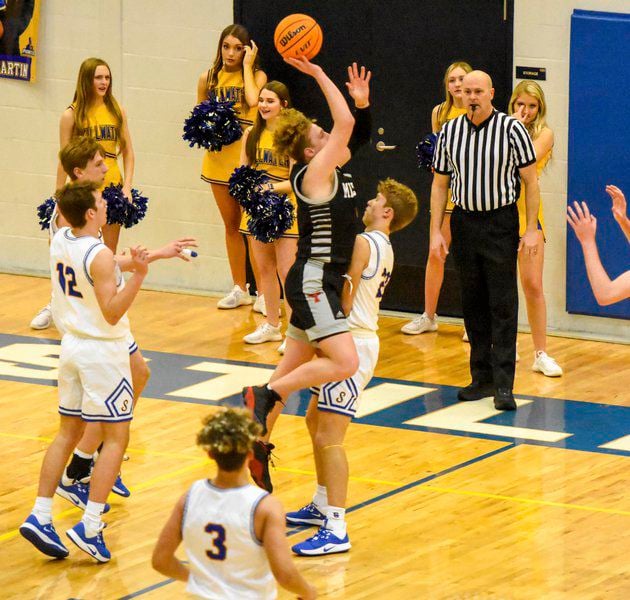 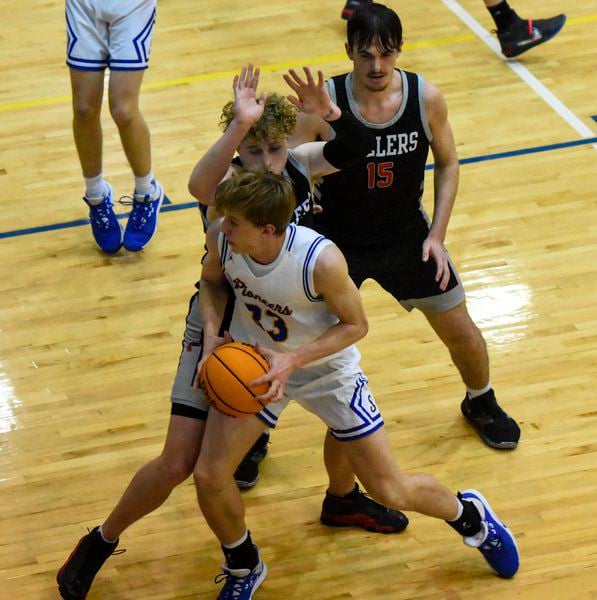 Stillwater High sophomore Max Gosney draws a foul in the paint going up for a shot during Friday’s game against Yukon. 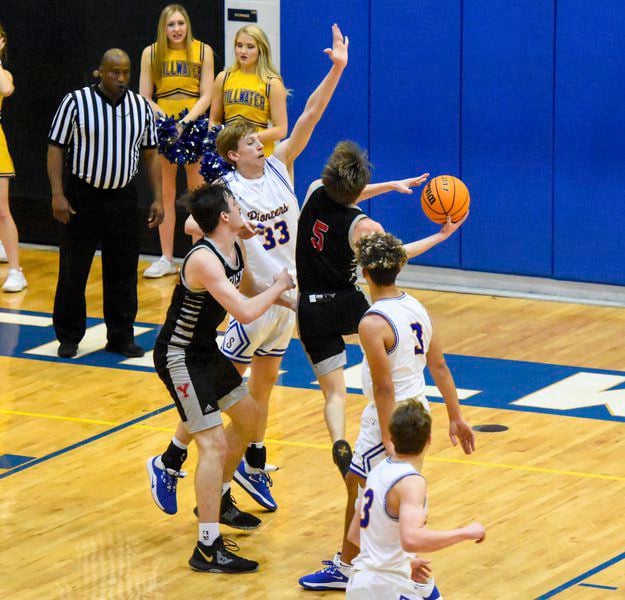 Stillwater High sophomore Max Gosney draws a foul in the paint going up for a shot during Friday’s game against Yukon.

On a day known for being about love, it was heartache for the Stillwater High boys’ basketball team.

The Pioneers’ contest on Valentine’s Day seem destined for an overtime period just as the girls’ game had done previously.

However, a game-tying foul shot was missed in the final seconds. Yukon couldn’t seal the win at the free throw line, but a half-court heave just fell short at the buzzer.

Yukon avenged a four-point loss to the Pioneers from last month with a 53-52 win over Stillwater. The loss marked the ninth-straight for SHS coach Michael Davis and his squad.

The Pioneers rallied from a double-digit deficit in the fourth quarter to make it a one-possession contest on several occasions during the final minute.

After Yukon (11-10) scored the first bucket of the fourth quarter, Stillwater (3-17) went on a 9-0 run. The Millers’ lead was trimmed to three points with just 51 seconds left in the contest.

“We went back to our strong man-to-man defense,” Davis said. “We didn’t play any man-to-man in the first half. We switched some things in the second half and we kind of denied (Brayden) Dutton in the second half. Kobe (Hollye) and Gunnar (Bratton) did a good job on him.”

SHS junior A.J. Frost rebounded a missed free throw with eight seconds left and quickly found senior Garrick Martin on the perimeter. Martin pump faked a 3-pointer and began to dribbled toward the bucket, but was fouled with 4.6 seconds on the clock.

Martin made his first foul shot, but his second bounced off the front of the rim. Yukon’s Dutton rebounded the ball and was quickly fouled.

“Garrick is usually a reliable free throw shooter,” Davis said. “He said he rushed it, because usually Garrick knocks free throws down. He got to the line, so that was huge, too.”

With his team leading by just one point, Dutton missed both free throws with three seconds left in the game. Martin quickly dribbled toward midcourt before firing a last-second shot that nearly became a highlight reel moment. Instead, it resulted in another loss for a team that’s struggled and battled injuries down the stretch.

“We are building on what we’re doing, and I like that,” Davis said. “It was a short talk after the game. I just told them it was a Pioneer effort and I was proud of them.”

Stillwater defeated Yukon 58-54 on the road last month. On Friday, the Pioneers trailed the entire contest.

Yukon scored eight of the first 10 points of the game. Two of those came at the foul line following a technical foul on Martin.

SHS sophomore Max Gosney helped the Pioneers keep the game within a possession or two in the first half. He scored eight of his 12 points in the half.

“It was good to see Max Gosney catch the ball, go to the hole and finish it,” Davis said. “Garrick and the other guys were making every effort to get him the ball, because he was scoring. That was a good thing to see.”

Martin led Stillwater with 19 points – 17 of which came in the second half. Senior Jack Smithton scored seven points, while senior Holley and sophomore Bratton added six each.

Davis was impressed by Bratton’s play and ability to bounce back after making mistakes. The sophomore guard has earned more playing time following the season-ending injury to sophomore Jackson Holliday.

“Gunnar has gotten so much better,” Davis said. “Every game he gets better. He threw the ball away when he should have gone to Max, because Max was open. But, then he goes down, gets a steal and a layup. There’s no quit in him and he’s come a long way. I think he can be a special player at point guard before it’s all said and done.”

Stillwater will host Southmoore, ranked No. 2 in Class 6A, at 7:30 p.m. Tuesday for its senior night. It will also be the final home game for Davis, who has announced he’s stepping down after 22 years as coach and 29 years with the program.

“We’re going to need everybody for that game,” Davis said. “It’s going to be a tough game. If they give me the effort they gave us tonight, we’ll be in the game.”