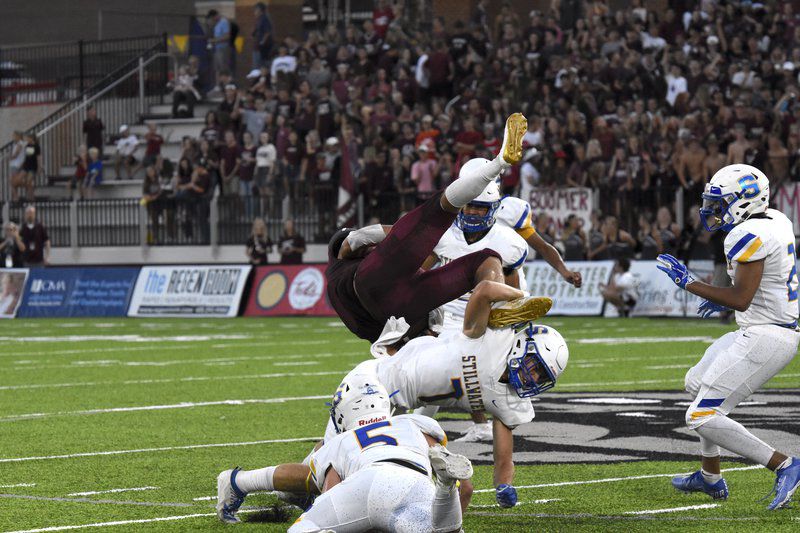 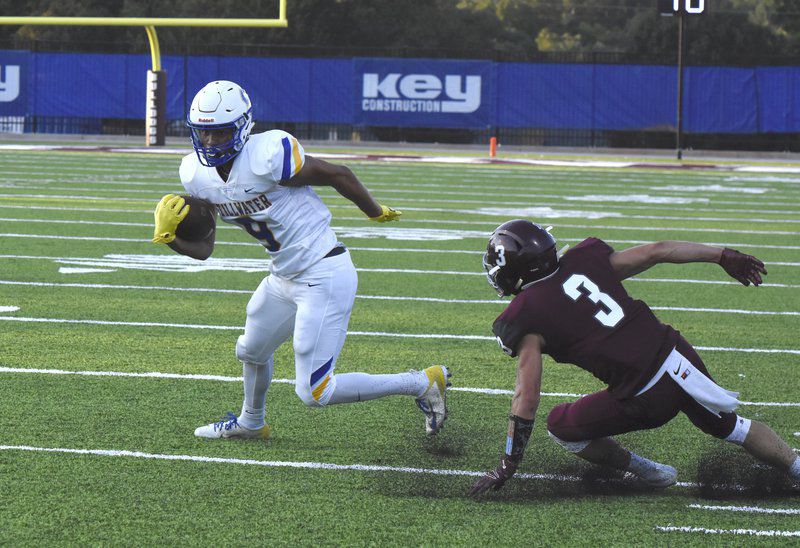 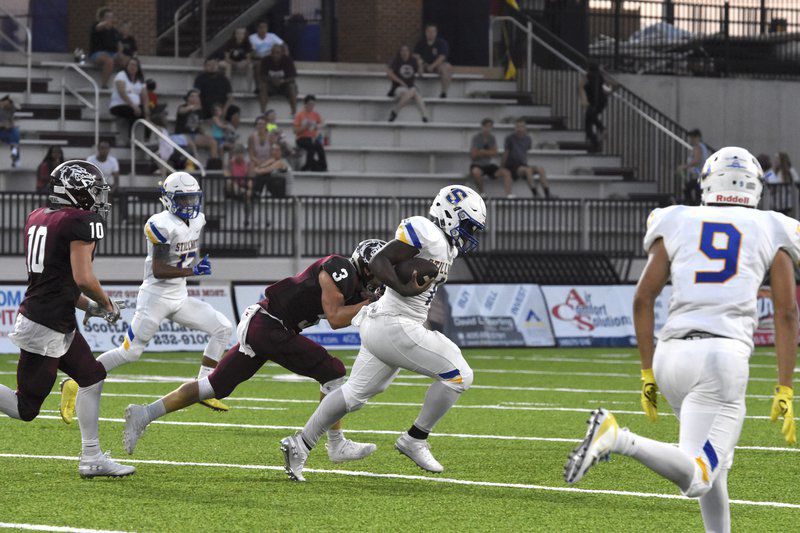 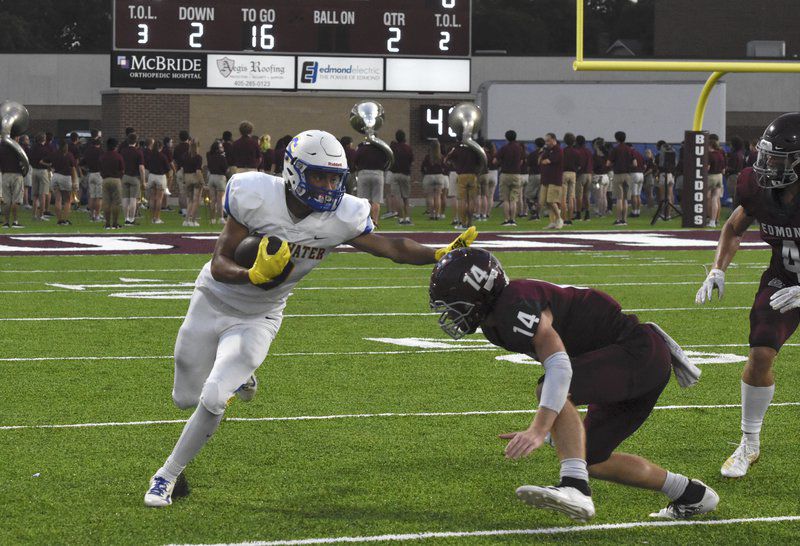 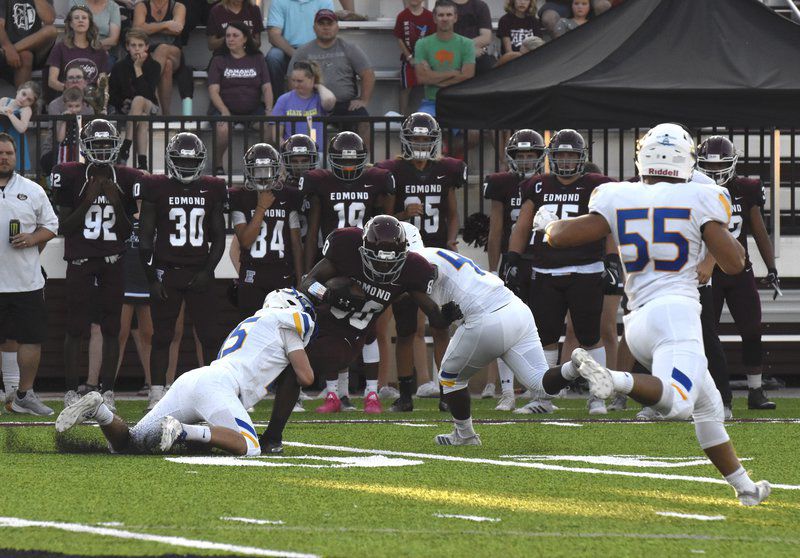 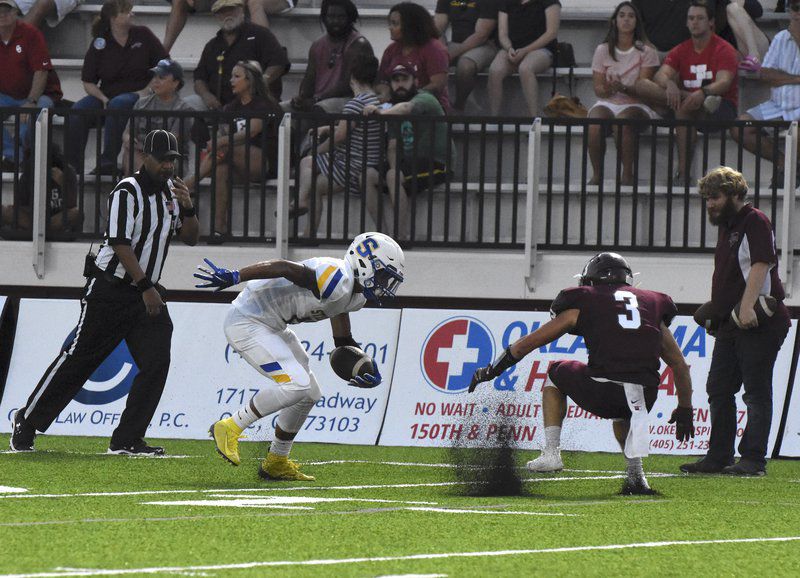 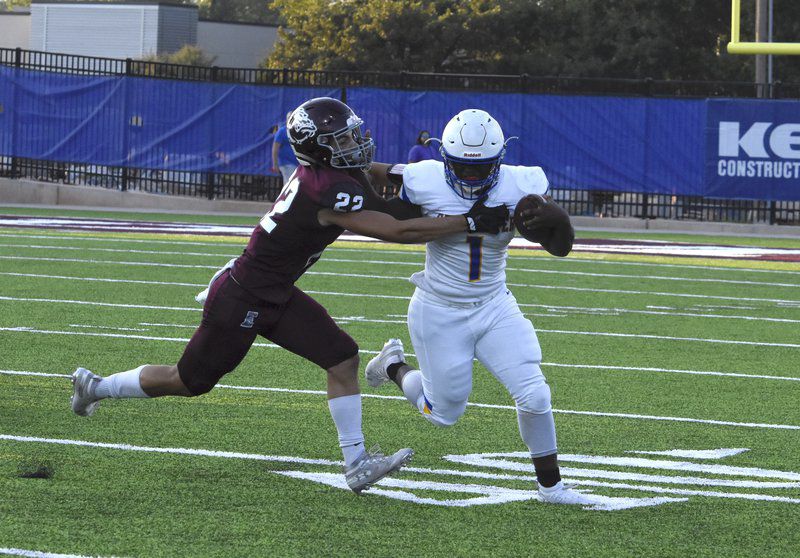 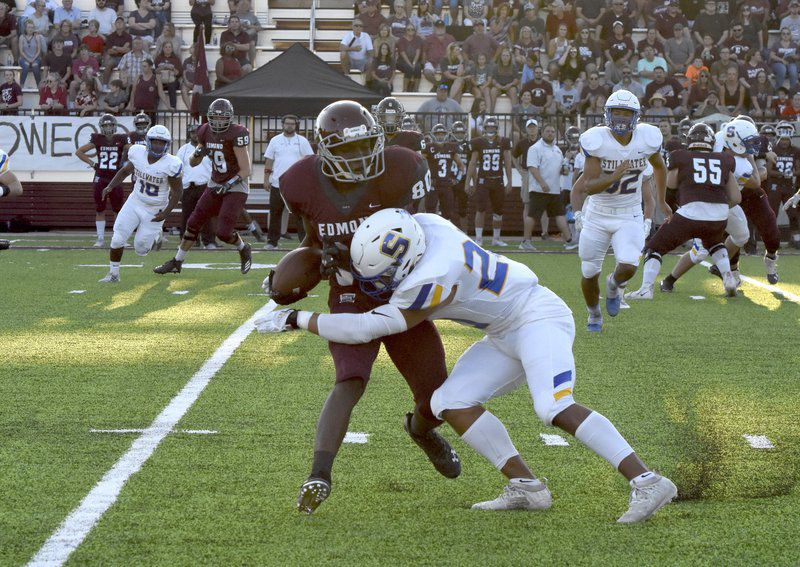 Ahead by just a touchdown – after both teams scored to begin the second half – the 5-foot-11, 245 pound junior defensive lineman read the screen pass Memorial had been using successfully and picked off Bulldogs’ quarterback Trace Evans.

Diaz gained a handful of yards on the return, setting up Stillwater’s offense in the Memorial red zone. Two plays later, Qwontrel Walker scored his second touchdown of the night.

Momentum shifted in Stillwater’s direction, and the Pioneers never looked back. They beat Memorial, 42-7, on a night the Bulldogs opened their new stadium.

“That was big time,” senior quarterback Gunnar Gundy said. “Getting a turnover in the red zone is huge, honestly. It’s pretty much automatic points. It kind of turned the tide a bit. The defense got a stop the next possession and then we scored again, and they started to quit after that.”

“That was a great spark for us,” Barnard said. “We were trying to get rolling at that point, and that just crumbled them is what it felt to me.”

Barnard’s Pioneers led only 7-0 at halftime of a game they were expected to win big. The Pioneers’ offense took a while to get started, as it scored 35 points in the second half.

“We were a little sloppy in the first half, especially offensively,” Barnard said. “Defense did a great job in the first half. We were banged up and had guys playing out of position – it was rough – but they did a great job and played really strong. The second half was more of what we kind of expected to see. The big deal was to get the running game going. Qwontrel and the offensive line had a great second half, and turned things around for us.”

For the offense, it was a classic game of two halves. They gained 180 yards in the first half, but were held back by penalties and miscommunications on throws that have become routine during the past 12 months.

“We started slow and a few guys got banged up,” Gundy said. “We didn’t find our rhythm. In the second half, we talked and came out strong. We kept our confidence and played true Stillwater football.”

After halftime, Memorial came out and drove 80 yards in 10 plays – even converting a fourth-down-and-2 – en route to a game-tying touchdown. A game that wasn’t supposed to be close after last year’s 61-18 drubbing by Stillwater was all of a sudden tied.

Then the Pioneers’ offense went to their bread and butter. They gave the ball to Walker for 11-straight plays during the next three drives.

Walker, who finished the night with 25 carries for 193 yards and three touchdowns, ran the ball four times for 56 yards on the first drive after Memorial’s touchdown. Three plays later – after Diaz’s interception – Walker was back on the field for two more carries totaling 10 yards and a touchdown.

“We came out slow, but then we seen what we could do to break through their defense,” Walker said. “I need to work on my agility and cutting still. That’s why I kept tripping up. It could be the turf or the new shoes.”

He capped the following drive of 70 yards with a 1-yard touchdown run. Walker carried the ball seven times on the drive. The big play on the drive was a 37-yard pass from Gundy to junior Steven Brown, who amassed five receptions for 95 yards and a touchdown on the night.

The next two Memorial drives ended in punts after five plays. Meanwhile, Gundy found senior wideout Anthony Bland, who caught eight passes for 108 yards, for the next two touchdowns.

“He’s a great player,” Gundy said. “He saved my butt on one of them as I kind of under threw it, but he made a great play.”

During the next seven days, the Pioneers will have plenty to work on, including limiting their eight penalties for 75 yards and starting the game with a bit more rhythm than they did Friday night.

“We’ve got plenty to work on,” Barnard said. “We will learn a lot from the first half tonight. I think in just terms of our character and development of our football, we learned a bit in the second half, too. We’ll just stay with it and do what we do, and it will come around.”