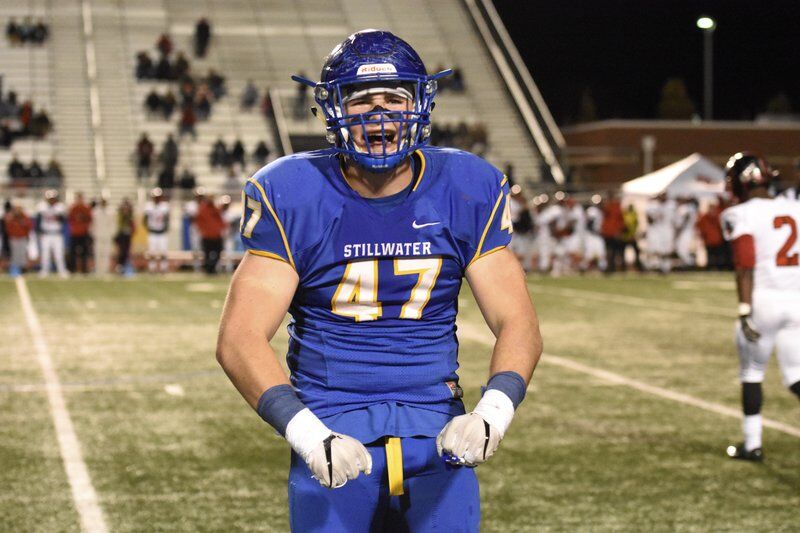 Jimmy Gillispie/Stillwater News Press Former Stillwater High football player Luke McEndoo flexes his muscles while celebrating a play during his junior season. McEndoo will be walking on at Oklahoma State to play for his dad, Jason McEndoo, who is the OSU Cowboy Backs coach. 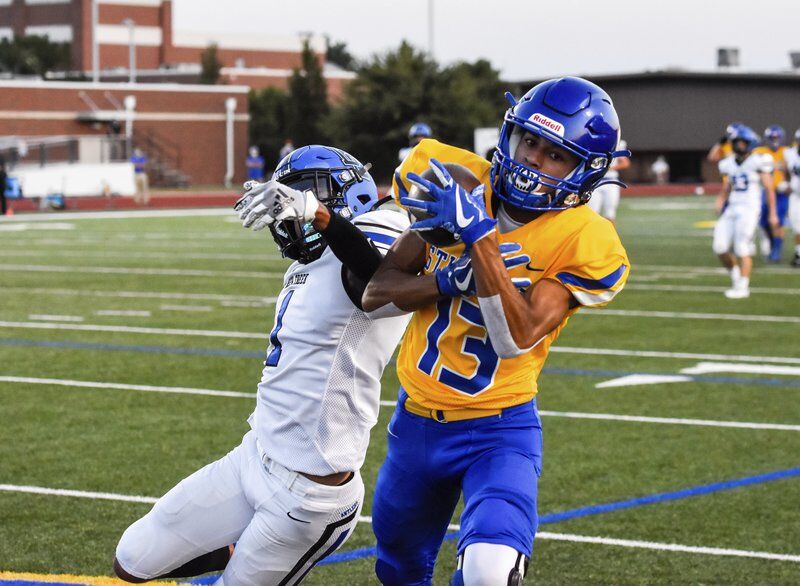 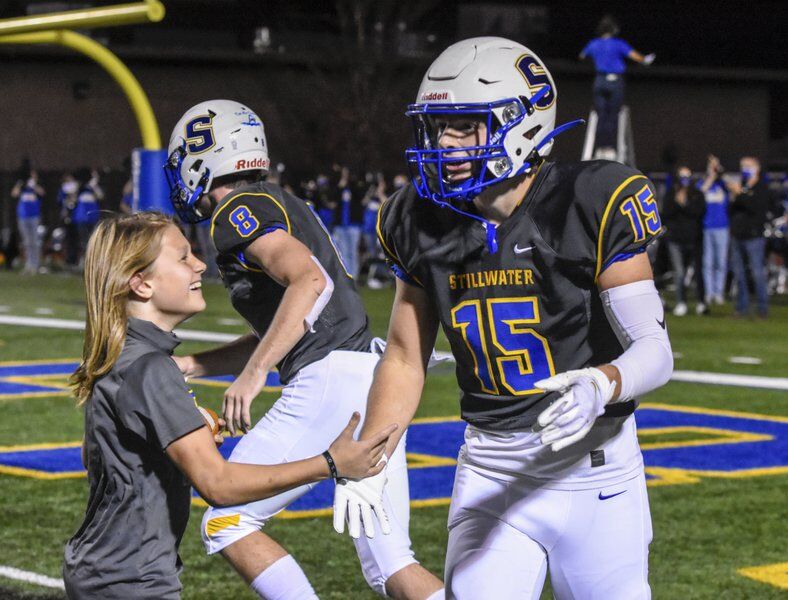 Jason Elmquist/Stillwater News Press Stillwater High’s Carter Barnard (15) gets a high-five from his brother after returning a blocked field goal for a touchdown during a game against Putnam City North at Pioneer Stadium last fall. Barnard will be walking on to the Oklahoma State football program this fall.

Jimmy Gillispie/Stillwater News Press Former Stillwater High football player Luke McEndoo flexes his muscles while celebrating a play during his junior season. McEndoo will be walking on at Oklahoma State to play for his dad, Jason McEndoo, who is the OSU Cowboy Backs coach.

Jason Elmquist/Stillwater News Press Stillwater High’s Carter Barnard (15) gets a high-five from his brother after returning a blocked field goal for a touchdown during a game against Putnam City North at Pioneer Stadium last fall. Barnard will be walking on to the Oklahoma State football program this fall.

When the Oklahoma State football team begins its annual preseason team camp next month, it will include trio of recent Stillwater High graduates.

Carter Barnard, Steven Brown and Luke McEndoo will all be walking on to the Cowboy program this fall, increasing the total to five former Pioneers who will be on the OSU program. All three helped build the SHS program to one of the elites in the state before wanting to continue their football careers.

Each of the three have different reasons for joining their hometown team, but seeing them continue their careers is something that makes SHS coach Tucker Barnard is proud.

“They all three got preferred walk-on spots,” Tucker Barnard said. “It’s a really neat deal. These guys grow up dreaming about playing college football, and obviously a bunch of them go to Oklahoma State games when they’re kids. It’s kind of a dream come true for kids who get that opportunity. I’m excited for them.”

Carter Barnard didn’t make any public or social media announcement about his decision. It’s gone under the radar, but it’s something he and his dad are excited about.

“Some of him going under the radar is probably my fault,” Barnard said. “I was pretty intentional of not over hyping my own son. To his credit, that doesn’t bother him. Obviously, he’s grown up with me so he knows how that was probably going to play out. I’ve wanted him to earn everything that he’s been given.

“He was a great football player for us. He did an outstanding job in the back end and made a bunch of tackles and plays. He’s saying right now that he wants to coach. He had opportunities to go play Division II football, but I felt like the experience at this level – if he truly wants to coach and stick with that – and being around that level of competition will be a benefit to him in the end.”

Carter Barnard racked up 64 tackles this year – an increase from 50 his junior year. He also returned a blocked field goal for a touchdown. As a junior, he had four interceptions in a year that saw SHS reach the state title game for a second-straight season.

For him, going to OSU gives him a chance to continue playing football while also possibly helping him work toward a career in the sport. Coach Barnard said Carter has talked about also joining the coaching ranks one day, so learning under OSU coach Mike Gundy and his staff could be a good foot in the door.

Carter’s knowledge of the game is something his dad noticed years ago. It helped him help lead the SHS secondary the past two years as a defensive starter.

“Even when he was smaller than other guys all the way back to seventh-grade football, he would give directions on the back end,” Tucker Barnard said. “He’s always been smart and would point guys around and help them understand the scheme. I think a lot of that just comes from what he’s exposed to at home.

“In that same line of thinking, Luke is that same way up front. You could watch Luke on any given play defensively, and he’s moving somebody to the other side or lining somebody up. I think that’s just because that’s how we talk at home or we watch a football game at home.”

McEndoo also chose OSU because of coaching, but in a different way. His father, Jason McEndoo, is the OSU Cowboy Backs coach. He coaches the Cowboys who play fullback and tight end, which are combined into the Cowboy Back role.

That’s one of the roles McEndoo had at Stillwater High. He started as a fullback as a freshman, and helped tailback Qwontrel Walker become one of the state’s top 10 leading rushers as far as career yardages goes.

The chance to continue playing a similar role, and doing it for his dad, was an easy decision for McEndoo.

“Obviously, I’m going to go play fullback for my dad,” McEndoo said. “I was talking to Gunnar (Gundy) and I ended up talking to Coach Gundy, and he said we’d love to have you come play. My dad told me I’d probably not play my first year, but later on down the road, I’d have a chance to be a really good player. Hearing my dad and Coach Gundy tell me that was a really cool moment.”

Coach Barnard is happy McEndoo will be joining to Cowboys, and believes he can contribute on the field.

“He’ll go and be able to contribute there,” Barnard said. “He’s a great player. He’a skilled athlete. He plays baseball, he plays basketball, but also a strong, physical guy that has a great work ethic. He’ll have a chance to do something there for sure.

“The thing that has probably hindered him the most is his height. You look at the guys they recruit for those positions and offer scholarships to and they tend to be taller like 6-3 or 6-4 and bigger. I think that Luke has a lot to offer. He’s a great football player.”

When McEndoo made his announcement, he did so with a video of him walking out of tunnel under Boone Pickens Stadium. It was something he put together with his dad, and it’s a moment he won’t forget.

“We went up there late one night and he just used his phone,” McEndoo said. “It got the job done. It was a really cool moment. It was weird not having it be blue or yellow, but it was a cool moment. My dad is so proud of the video. It was his idea. It turned out to be pretty cool. He liked it a lot.”

McEndoo had a few offers to choose from, including one from Montana State where he grew up before moving to Stillwater. The others were NCAA Div. II schools.

Ultimately, playing for his dad and in his hometown were two factors too big to pass up. The same is true for former SHS quarterback Gunnar Gundy, who played with the three new walk-ons for three years.

“I think it’s the same thing with Gunnar – schools know their dads coach at OSU,” McEndoo said. “I hadn’t had a whole bunch of interest, except for some smaller schools, but I knew I could play at a Division I level, so I didn’t really look at them much. I talked to UCO a lot and they’ll be really good. I talked to Montana State for a while, but all along I think I knew I was going to come play for my dad anyways. It was a little bit of recruitment, but not a lot, because they knew I was probably coming here.

“I’m going to live in Stillwater, so I can still come home and eat dinner. That’s appealing to a lot of guys. Since OSU has been good for the last 14 years or so, being around it and seeing them win is definitely a cool thing to want to be a part of, even if you’re not on scholarship. Coach Gundy likes walk-ons a lot, and there have been a bunch of dudes that have walked on and ended up earning a scholarship, so that’s a part that would be cool on down the road, too.”

McEndoo also played on the defensive for Stillwater. He was a force for opposing offensive lines, often breaking into the backfield and wreaking havoc. Those days are now past him, but it’s something he won’t forget.

“It made me realize I probably won’t be able to do that again,” McEndoo said of winning the district defensive player of the year honor. “It was a lot of fun playing defense because it gave me a chance to play a lot and make big plays here and there. Obviously, I had good players around me. Being able to tackle a quarterback or running back was pretty fun, and it was a nice break from just blocking all of the time. It was a fun three years.”

For Brown, going to OSU is a bit of a comeback story. He burst onto the scene in his junior season at Stillwater, catching 44 passes for 907 yards and 13 touchdowns.

Brown was nip and tuck with teammate Anthony Bland, who is playing for Princeton University, as far as stats go until he tore his ACL in the opening minutes of Stillwater’s first playoff game that season.

He worked hard and came back as the leading receiver this fall. He caught 33 passes for 608 yards and eight touchdowns in a Pioneers’ offense that wasn’t as high-flying as the previous year but still managed a 9-1 record.

“I feel good now, but in the beginning of the year, I was in a slump trying to get my confidence back,” Brown said. “Eventually I did and had a good season.”

The undersized, but speedy, Brown talked with OSU offensive coordinator and wide receivers coach Kasey Dunn about joining the Cowboys.

That was the talk he needed to make the decision official.

“Myself and Coach Dunn had a conversation and it led to me making the announcement,” Brown said. “We just talked about what I would play and how it was going to be when I get up there. It made me feel like I’m already on the team.

“I just feel that I can fit in really good. It’s always been a dream of mine to be a Cowboy.”