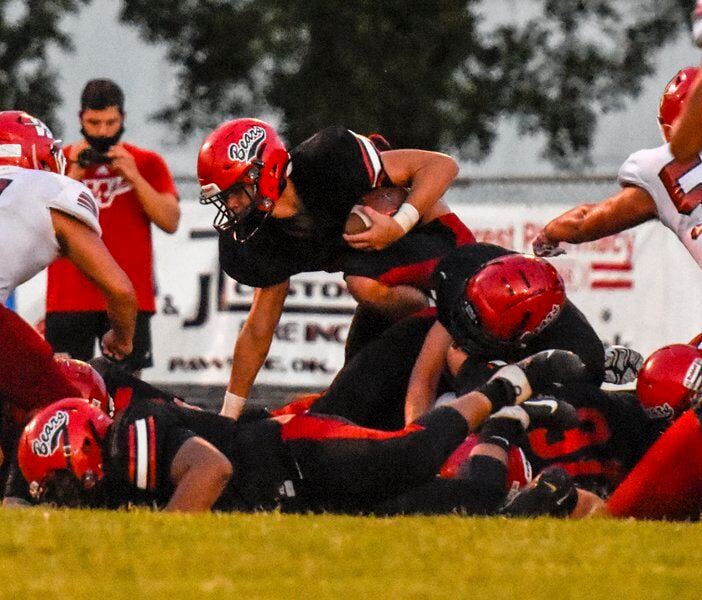 Pawnee High senior running back Trevor Mitchell tries to step through the pile of bodies on a run during Friday’s season opener. 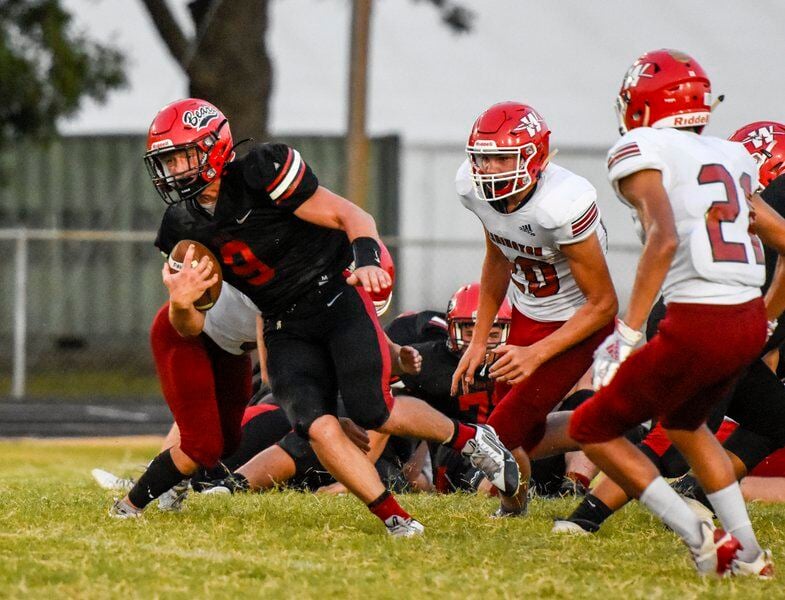 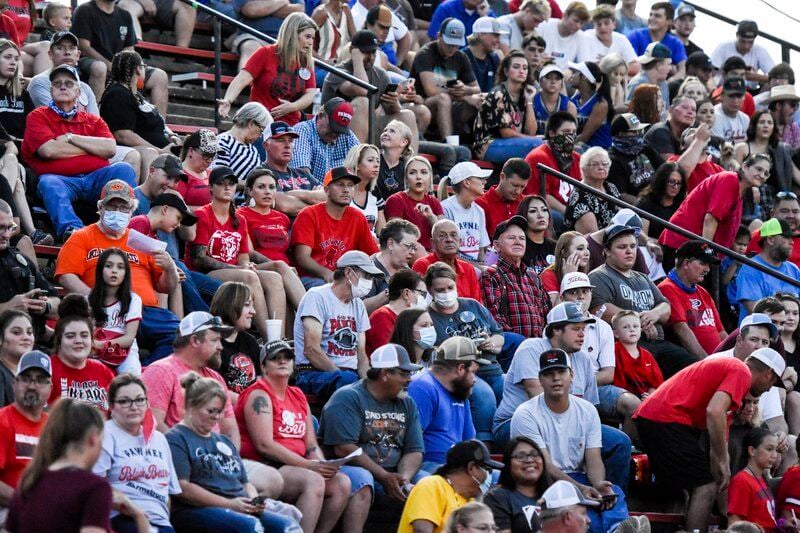 Jason Elmquist/Stillwater News Press There was a large turnout of Pawnee High football fans for Friday's season opener against Washington. Pawnee and Perry were the only area teams that played Week Zero contests.

Pawnee High senior running back Trevor Mitchell tries to step through the pile of bodies on a run during Friday’s season opener.

Jason Elmquist/Stillwater News Press There was a large turnout of Pawnee High football fans for Friday's season opener against Washington. Pawnee and Perry were the only area teams that played Week Zero contests.

That was the difference in a highly-competitive game Friday night at Pawnee Memorial Field between two teams that combined for just a pair of losses last year.

After their season opener, the Black Bears have matched last year’s loss total. Pawnee fell 35-21 to Washington to begin its 2020 season.

“These kids miss the guys from last year, but these guys showed up tonight and played hard,” Cook said. “Washington has a good team and they’re coached by a good coaching staff. I think the game was a better game than what the score reflected.”

“We had some fumbleitis tonight – a little bit of turnovers,” Cook said. “I think that was the biggest difference in the game. We had some young guys who need to step up and take the spots of some of the guys we lost last year. Some of those young guys did a great job for us.”

The final turnover was the backbreaker for Pawnee, as it began driving to tie the game in the fourth quarter. Trailing 21-14, Pawnee had just stopped Washington on fourth down, but momentum flipped two plays later.

Pawnee tailback Trevor Mitchell powered forward for five yards before losing possession of the ball. Washington’s Kobe Scott recovered the ball and ran 30 yards for the game-clinching touchdown with 6 minutes and 56 seconds remaining in the contest.

The Warriors added a late touchdown to extend their lead to 21 points. Washington quarterback Emitt Wilk completed 17 of 22 passes for 184 yards and three touchdowns. He added an 18-yard touchdown run in the final two minutes of the game.

Cook said he wanted to schedule tough opponents to begin the year. He hopes his team can learn from the loss and move forward before the games that count toward the playoffs begin in a few weeks.

“I’ve been telling the guys all week it’s a nondistrict game,” Cook said. “You can’t go all year sometimes and only lose in the playoffs. It’s not that big of a deal. It’s a nondistrict game. We’re playing a better opponent in order to get better, and our next two opponents show that, as well.”

Washington took advantage of Pawnee turnovers in the first half to build a 21-8 advantage at the break. Washington converted two turnovers into 14 points, and scored its third first-half touchdown after a shanked punt.

The Warriors’ three scoring drives were 25, 26 and 23 yards. Their first two drives began in their own territory and both ended in turnovers on downs. The Warriors’ other drive began at the Pawnee 30-yard line, but the Black Bears stopped the Warriors on fourth down.

The ensuing kickoff was nearly botched, as the ball rolled to a stop at the 1-yard line before Skidgel scooped it up and returned it 10 yards. Four plays later, the punt went only eight yards. Again, Washington scored quickly – on a 15-yard pass – after it was helped by a Pawnee personal foul.

The Warriors extended their lead after Skidgel lost a fumble on his own 23-yard line. Three plays later, a seven-yard touchdown pass put the Warriors ahead by 13 points before halftime.

Pawnee’s lone score of the half came on its second drive. It was a 15-play, 81-yard drive as the Black Bears ran through the Warriors’ defense. Mitchell scored from four yards out to give Pawnee an early lead.

Mitchell ended the night with 18 carries for 65 yards. Skidgel led the team with 118 yards on 19 carries.

Pawnee will travel to Mooreland next week. The Bearcats were 7-4 last year.