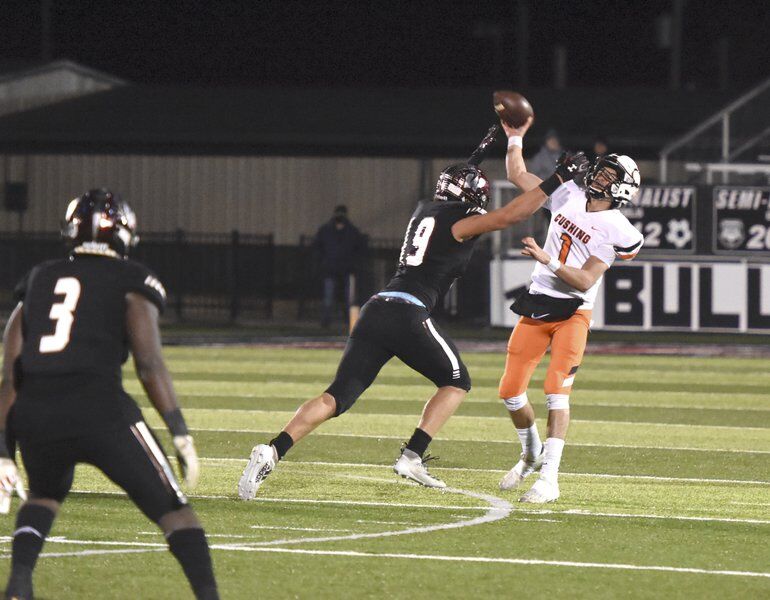 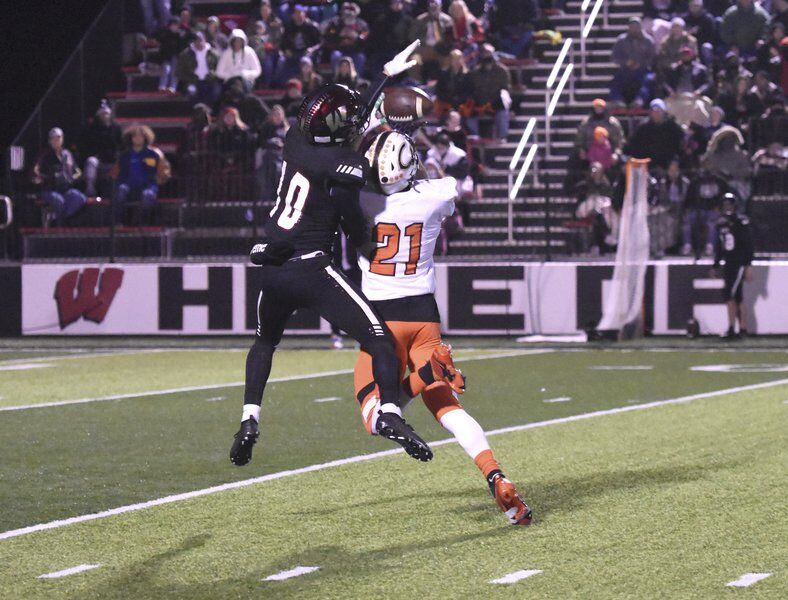 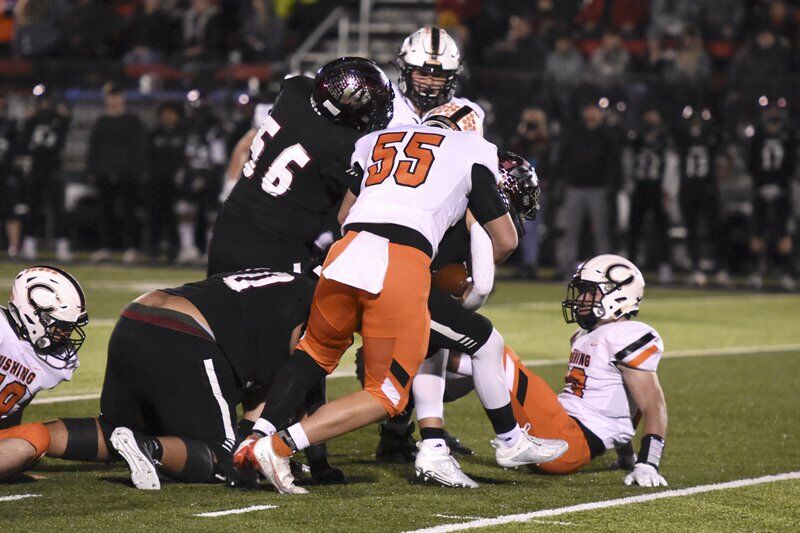 The Cushing High defense stops Wagoner running back Braden Drake at the line of scrimmage on the first play of the game Friday night at the Class 4A state semifinal game at Wagoner. 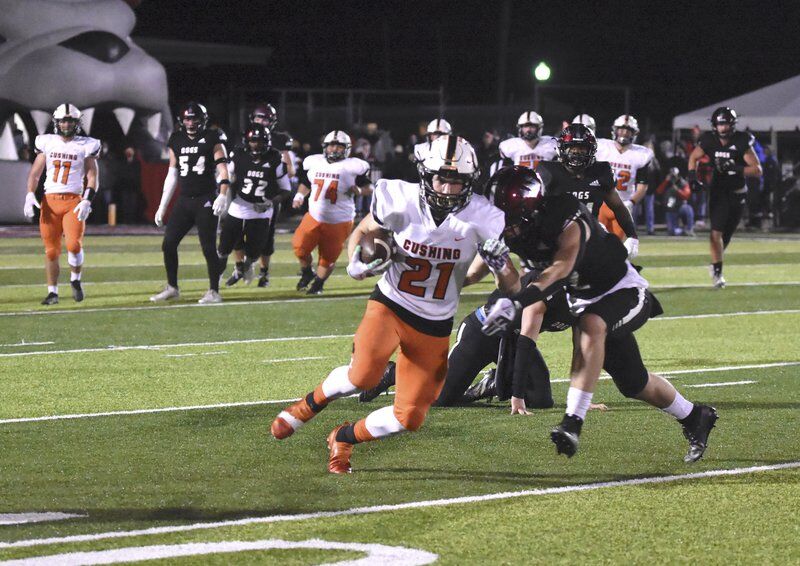 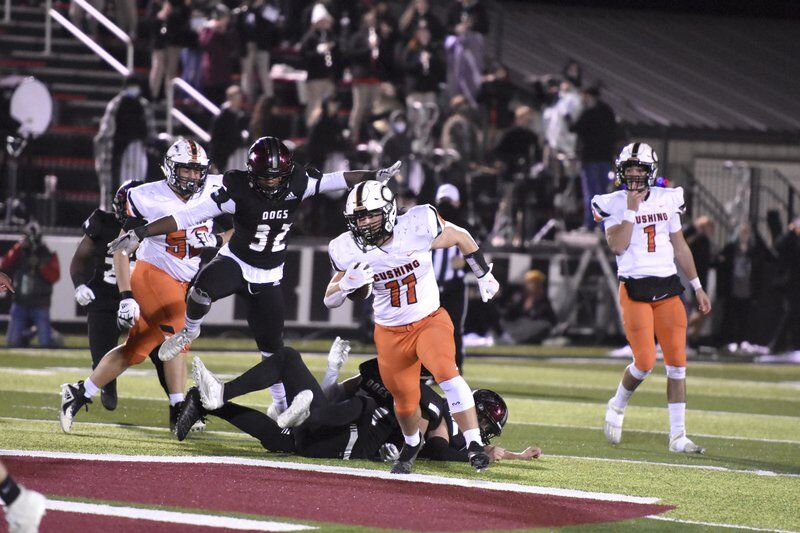 The Cushing High defense stops Wagoner running back Braden Drake at the line of scrimmage on the first play of the game Friday night at the Class 4A state semifinal game at Wagoner.

WAGONER – Cushing High stopped Wagoner’s talented senior running back Braden Drake at the line of scrimmage and behind the line on the first two plays of the game.

It was the player the Tigers needed to slow down.

Unfortunately, Drake ran for 33 yards on the next play. That set the tone for the first drive and first half as Drake carried the Bulldogs to a state championship berth with a 40-14 victory, and ended Cushing’s magical run through the playoffs.

“They’re an excellent football team and there’s a reason they’re undefeated and been doing what they’ve been doing,” Cushing coach Rusty Morgan said. “They ran the ball extremely well. Their running back and the size they had up front got it done early and often, and unfortunately got us in the hole we were in. We kind of had to change what we were doing, but that’s what really good football teams do. Not taking anything from them, I’d like to do things better, but when you play a great football team, that’s what you get.”

Cushing ended the chance of being shut out on its final drive of the third quarter. The Tigers drove 75 yards in six plays with most of it coming through the air by the arm of sophomore Blaze Berlowitz.

A helmet-to-helmet penalty nearly derailed the drive on the first play, but Berlowitz found wide receiver Austin Munday for a 23-yard gain to move the chains. Berlowitz found wideout Lane Yaunt for two passes for 60 yards, including the 27-yard touchdown pass.

In the final minutes of the game, Cushing senior running back Hayden Fry scored the game’s final touchdown. He powered in from 2 yards out to trim the lead by seven points. Fry finished the game with 15 carries for 81 yards in his final prep game.

“We were going to continue to move the ball,” Morgan said. “We talked at halftime that being in a bit of a hole, we’re still going to come out and do what we do. Then we got to the 2-yard line, and yeah, we’re going to hand it to the beast.”

Berlowitz finished the game 8 of 24 for 155 yards and one interception. His main target was sophomore Camden Crooks, who caught four passes for 58 yards. Munday also caught two passes for 37 yards.

Cushing stopped Wagoner on its first drive after half with a three-and-out, but the ensuing punt was downed at the Cushing 1-yard line. Three plays later, Berlowitz was sacked in the end zone for a safety. Nine plays later, Wagoner scored and took a 33-0 lead.

The Bulldogs’ lead was too much to overcome, especially after a dominating first half.

Drake ran the ball 14 times for 193 yards in the first half as Wagoner took a commanding lead over the Tigers. He accounted for most of the Bulldogs’ 243 yards in the half.

His longest run gave Wagoner a 21-0 lead in the second quarter. It was his first touchdown of the game as Nunu Clayton scored the first two touchdowns for the Wagoner.

The first half ended with Wagoner’s kicker Ethan Muehlenweg drilling a 26-yard field goal. His boot capped a half dominated by the home team.

Cushing’s offense struggled to get much traction in the first half. The Tigers went three-and-out on their first two drives – gaining only 12 yards. The next drive stalled at midfield before the next drive went inside the red zone before stalling out on a fourth-down incomplete pass.

Cushing later intercepted the Bulldogs on their side of the field, but couldn’t take advantage. The drive ended with another three-and-out.

Wagoner advances to face Clinton next week in the championship game.

“It’s never easy unless you’re the last one standing,” Morgan said. “You’re always in this situation unless you’re that team. I had those seniors stand up just as we have the past few weeks and told them them I know they’re going to be successful in whatever they do next. I know they kind of men they are and we have their back.”