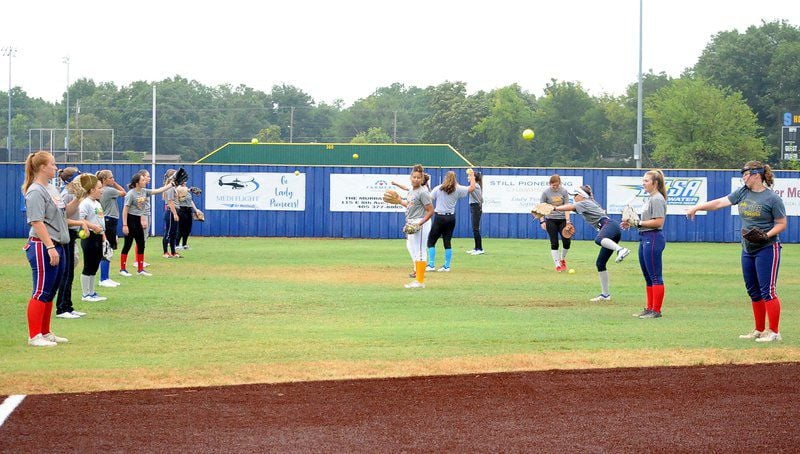 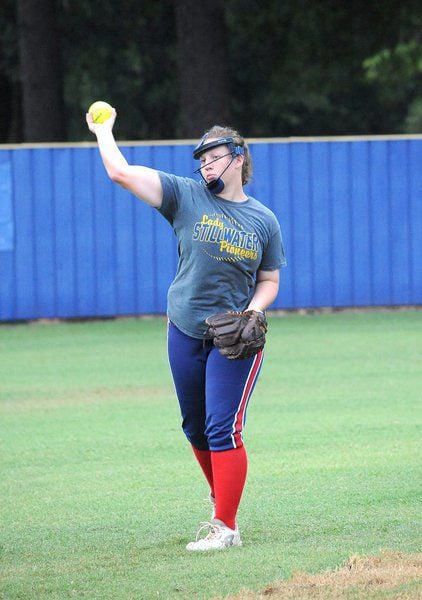 When the Stillwater High softball team takes the field Monday to begin the 2019 season, it’s going to look different with a handful of new faces.

The Lady Pioneers graduated five seniors from last year’s squad that reached the Class 6A state tournament for a second-straight year. Included in those five players were a pair of NCAA Div. I signees in Julia Cottrill and Kendall Jean, who will be playing for Florida and Harvard, respectively.

Yet, the Lady Pioneers’ season goals remain constant. In fact, they want to advance even further, after a first-round exit last year.

“I think it’s attainable for them,” SHS coach Karie Linsenmeyer said. “They’ve done it. It’s not just a goal – it’s an actual possibility. I think the last two years have kind of created that atmosphere, and their expectations are to go to state, even though we lost quite a few players. They’re stepping in and playing at a higher level right away, and they have more confidence.”

This year’s squad will have a high number of relatively new faces on the field, but there will also be several Lady Pioneers who played significant minutes last year. Together, they have taken experience gained in the past two years and have put it toward this fall.

“A lot of those girls that are moving into those roles have had opportunity to be on those teams that went to state,” Linsenmeyer said. “Hopefully, they take pride in that. They’re stepping right into those roles.”

One player stepping into a new role will be sophomore Sidney McLaughlin. Last year, she hit .447 with 46 hits and 35 RBIs.

This year, McLaughlin will be taking a larger role in the field. She will be behind the plate as the Lady Pioneers’ catcher, replacing Cottrill in the field and at the plate with her bat.

“We don’t drop off there much at all,” Linsenmeyer said. “Sidney is a great catcher and a great hitter, as well. She will step right in.”

The rest of Stillwater infield – and outfield for that matter – is still up in the air, as the Lady Pioneers play scrimmages this week leading up to Monday’s season opener. There are many players battling for the other seven spots, aside from the pitcher spot, which will also see a rotating cast of players throughout the season.

First and second base could be the most locked down of the spots, but even those could see multiple people playing there. Senior Erika Baldwin is likely back at first base, but freshman Madison Blankinship and sophomore Kylie Spiva could also see time there, too.

“All three of those girls can kind of hit, too, so it’s trying to figure out how to use them all,” Linsenmeyer said.

Sophomore Lyric Perry is possibly moving to second base this year. She played third base last year as a freshman, but will likely be sliding over two spots in the Lady Pioneers’ infield.

Next to her could be junior Alex Griffin, who played second base and in the outfield last year. This fall, she is likely the starting shortstop to begin the year.

Fellow junior Delaney Williams appears to be the starting third baseman, according to Linsenmeyer. However, sophomores Makenzi Swick and Kendyl Prichard could also play there, or other spots on the infield

“It’s just going to depend on who’s hitting and where everything fits the best,” Linsenmeyer said.

The Stillwater outfield will look completely new as is graduated three seniors who played there last fall. Possibly starting in the outfield could any arrangement that contains freshman Kaylee Linsenmeyer, junior Colbee Westbrook, Prichard, Williams or junior Maci Robison.

On the mound, Stillwater returns its primary starters from a year ago – senior Lauryn McLaughlin and Swick – and will add Prichard into the mix. It marks the first time in years coach Linsenmeyer can remember having that many pitchers who are ready to play on the varsity level.

“We have four pitchers and three of them are going to see varsity time,” Linsenmeyer said. “That’s different for us. Pitching has been a struggle for us, where we didn’t have a lot of it, but now we’ll have three girls who can pitch at the varsity level.”

Although there is plenty of uncertainty regarding this year’s lineup, despite the season opener just a few days away, Linsenmeyer feels confident about her squad regardless of who plays. One reason for that is their willingness to switch positions for the betterment of the team.

“Part of that is getting the girls to buy into that,” coach Linsenmeyer said, “and taking their pride and putting it aside a bit and just really do what’s best for the team. That’s what I’ve asked them to do. I’ve told some of the girls I don’t know where you are going to play right now, but I know I need you to play. It’s just a matter of where it’s going to fit best.

“They’ve kind of bought into that. Lyric Perry – we have her working out at third, we have her working out at second and I put her at shortstop a bit, but she’s just been OK with it all. That’s the same with Kendyl Prichard – she will pitch, but she can play middle infield or go to the outfield. The same with Delaney Williams – she can play pretty much any infield position or we can put her in the outfield.”

The Lady Pioneers have been scrimmaging various teams throughout the week in preparation of Monday’s season opener. Coach Linsenmeyer said she’s been pleasantly surprised with her team thus far, and she’s embracing the different style of team it is compared to the past several years.

“We’re definitely going to be different,” she said. “We’ll have some new faces and some girls at maybe some new positions, which is exciting. You worry about some of them accepting that and maybe it’s not where they want to play, but it’s what fits best for us. They’re accepting those roles. We have some freshmen who will see some time, as well. It’s been fun.

“It’s not going to be a home run hitting team, per se. We’re going to manufacture more and maybe try to do some different things than we’ve done in the past. Sidney will have our power, along with Erika Baldwin. Then a lot of the other kids are more base hits and doubles kinds of kids.”

Stillwater’s first home game will be Aug. 19 – a week after its season opener. SHS will welcome Bixby to Couch Park the following night, with the Stillwater Festival later in the week.

The postseason is two months away, but the Lady Pioneers believe they have what it takes to reach the state tournament again.

“It’s going to be hard,” coach Linsenmeyer said. “It’s not going to be an easy thing for us to do, but it wasn’t easy before so we’ll give it a shot.”