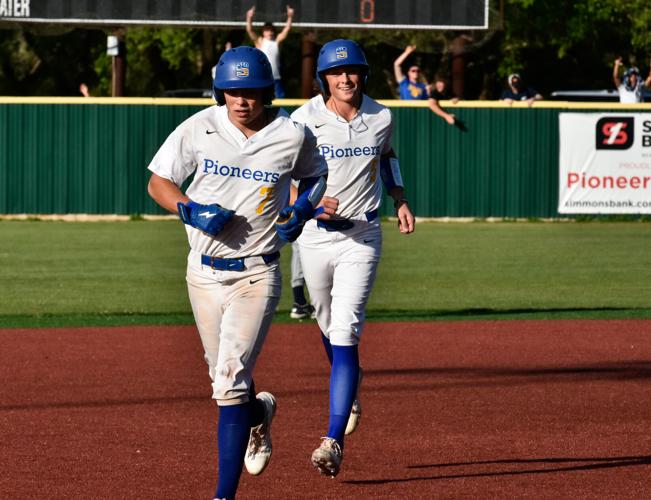 Stillwater High’s Jackson Holliday, front, and Ethan Holliday round the bases off a three-run home run by Gage Gundy in the first inning of Tuesday’s district game against Enid. 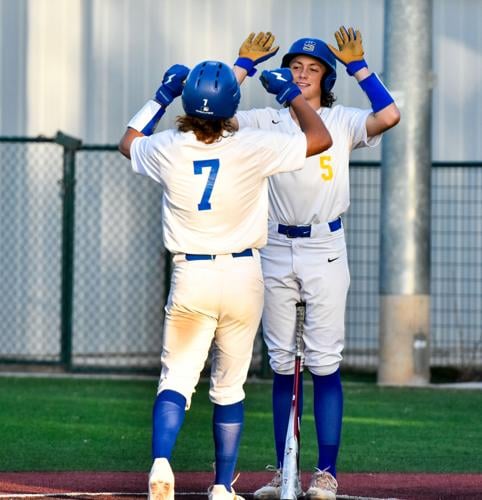 Stillwater High’s Jackson Holliday is greeted at home plate by his brother, Ethan Holliday, after Jackson hit a home run during Tuesday’s district game against Enid.

Stillwater High’s Jackson Holliday, front, and Ethan Holliday round the bases off a three-run home run by Gage Gundy in the first inning of Tuesday’s district game against Enid.

Stillwater High’s Jackson Holliday is greeted at home plate by his brother, Ethan Holliday, after Jackson hit a home run during Tuesday’s district game against Enid.

After Jackson Holliday rips a home run out of Couch Park and rounds the bases, Ethan Holliday greets his older brother at home plate.

They briefly cross paths before Ethan steps into the batter’s box and Jackson heads to the dugout. Ethan sticks up his hands, offering a double high five to Jackson.

It’s a symbolic way for Ethan to tell his brother, “Congratulations, I’m proud of you. Now, I’m going to try to outdo you.”

The Stillwater High baseball team’s batting order fuels the Holliday brothers’ competitiveness. Ethan always follows Jackson, the top-5 MLB Draft prospect who has a penchant for blasting moonshots over the fence. Senior shortstop Jackson bats second, and freshman third baseman Ethan is in the three-hole, ready to channel extra strength into his swing if Jackson crushes a no-doubter.

“I just get this adrenaline, where I’m like, ‘I’m about to hit one even harder,’” Ethan said. “So I think every at-bat, he does something crazy, I’m looking to do the same thing.”

In their lone season as varsity teammates, the brothers complement each other. Together, they have 26 home runs. Jackson leads the Pioneers with 16, and Ethan has racked up 10, third on the team behind Jackson and first baseman Gage Gundy.

They make no secret of their home-run race, but in the midst of their sibling rivalry, each Holliday takes pride in the other’s accomplishments.

“It’s really neat,” Jackson said. “That was probably the coolest baseball memory that I have, hitting back-to-back home runs with him, so it’s been awesome. It’s been a joy to be able to play with him and enjoy this time with him.”

For Jackson, that time is precious as his senior year winds down. The Pioneers start their postseason against Southmoore at 1:30 p.m. Thursday in Owasso. Before Jackson graduates, he and Ethan are thriving in their one season together playing the sport they love.

As the two eldest children of decorated MLB player Matt Holliday, Jackson and Ethan have been immersed in the world of baseball since birth.

They traveled across the country together and spent hours in clubhouses. They watched their father compete alongside greats on the diamond, appearing in All-Star games as if it were a routine part of his job – he was selected seven times.

They also met their dad’s colleagues. That might sound boring to most kids, but for the Holliday brothers, it meant watching St. Louis Cardinals third baseman Nolan Arenado practicing with Matt at Allie P. Reynolds Stadium, fielding grounders in the chilly rain.

Jackson rattled off names of other MLB players he met: Barry Bonds, Aaron Judge and Derek Jeter, a favorite for Jackson because of their shared backgrounds as shortstops. Ethan has taken pointers from the many influential people who have surrounded him.

“Just seeing those guys, the way they play, the way they carry themselves has really just helped me mold myself,” Ethan said. “And I think it’s really going to help me in the future.”

Although Jackson and Ethan have shared enough baseball-related memories to fill hundreds of pages, they competed as teammates only once before this season.

Jackson remembered a travel ball game when he was 13 and his team needed someone to step into the lineup on short notice.

He sat in the parking lot outside a baseball field in New York with his family, preparing to play when his coach called with a question: Would Ethan be able to fill in and join the team that day?

Luckily, Ethan competed in a different age group in the same organization, so his uniform – identical to Jackson’s – was in the back of the family's vehicle. Although Ethan was three years younger than Jackson, the spur-of-the-moment responsibility wasn’t too difficult for him.

“It was a super-laid-back, random game in the middle of the summer,” Ethan said. “And so I suited up, I wore my uniform, and we played a game.”

After that spontaneous occurrence, the Holliday brothers continued to sharpen their skills on separate teams. When the family moved to Stillwater, Jackson started his freshman year with the varsity Pioneers. Ethan won a little league state championship and learned from Jackson, whose career has skyrocketed since hitting one home run as a freshman.

“I wasn’t 6-3 and 180 pounds like (Ethan) is,” Jackson said. “I was about 5-7. I was a steady grower as far as strength and size, but kind of just working out and hitting every day with my dad has definitely helped.”

As teammates, the Hollidays rely on different styles of play. Jackson said he has speed and agility. Ethan might not be as fast yet, but he brings power to the plate.

Off the field, their personalities are distinct, too. Ethan’s gregarious nature is evident when his voice carries across the bleachers at Couch Park, while Jackson is often quiet and even-keeled.

Gundy, who trains with the brothers and spends time at the Hollidays’ mini-wiffle-ball field, has noticed their unique traits.

“Ethan always has a lot of energy, and I would say Jackson’s good at encouraging,” Gundy said. “He’s not as loud as Ethan with it, but he’ll come up to you one-on-one and encourage everybody, and if a kid’s struggling, he’ll help him out. They’re both supportive on the field.”

Whether they’re stringing together a home-run parade or defending the left side of the infield, Jackson and Ethan bolster the Pioneers not only with their natural talent, but also with the tireless commitment to work their father has demonstrated.

Soon, Jackson will either start college at OSU – where he has signed to play for his uncle Josh – or follow his father and take the leap into the pros. Ethan won’t see his brother batting ahead of him for the Pioneers anymore, but he intends for them to reunite on a bigger stage.

When that happens, unless they’re in the same pro organization, Ethan might not offer any high fives at home plate.

“I want to play against my brother in the minor leagues and the major leagues,” Ethan said. “I want to try to beat him. Maybe we’ll get drafted by the same team. But I think that time will come, and I’ll be ready for it.”