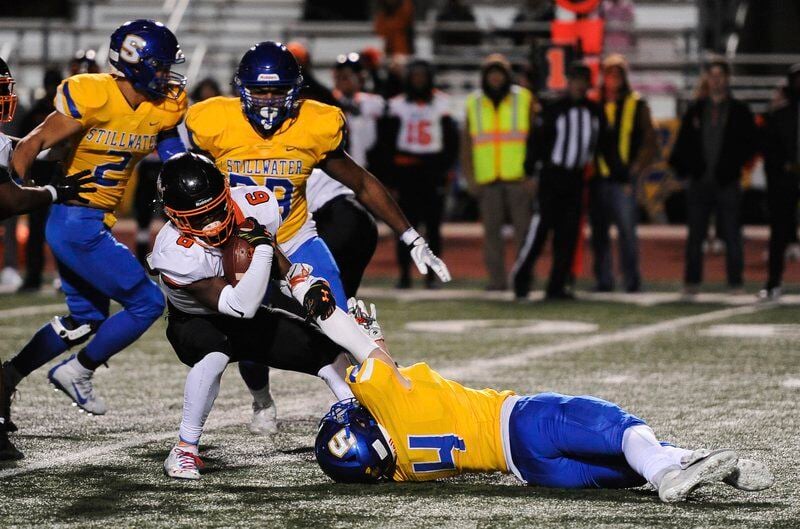 Photos by Jason Elmquist/Stillwater News Press Stillwater High senior linebacker Chance Clements clings onto a Booker T. Washington running back, allowing his teammates to bring down the back for a loss during last week’s playoff game at Pioneer Stadium. 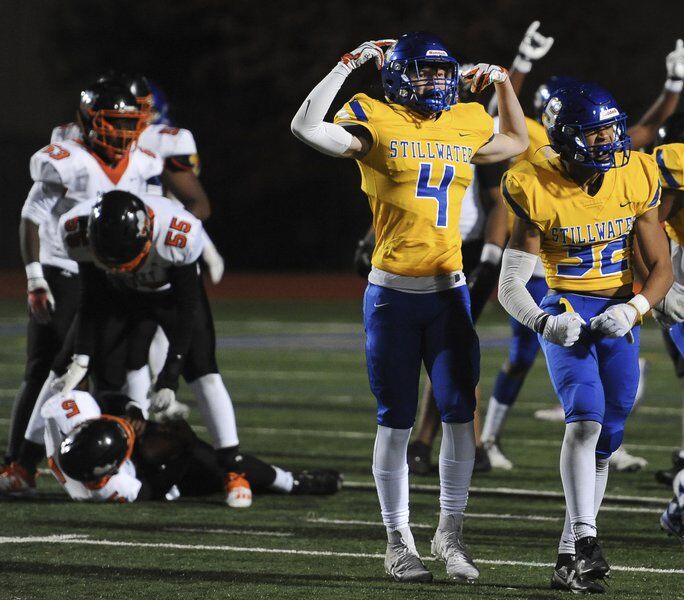 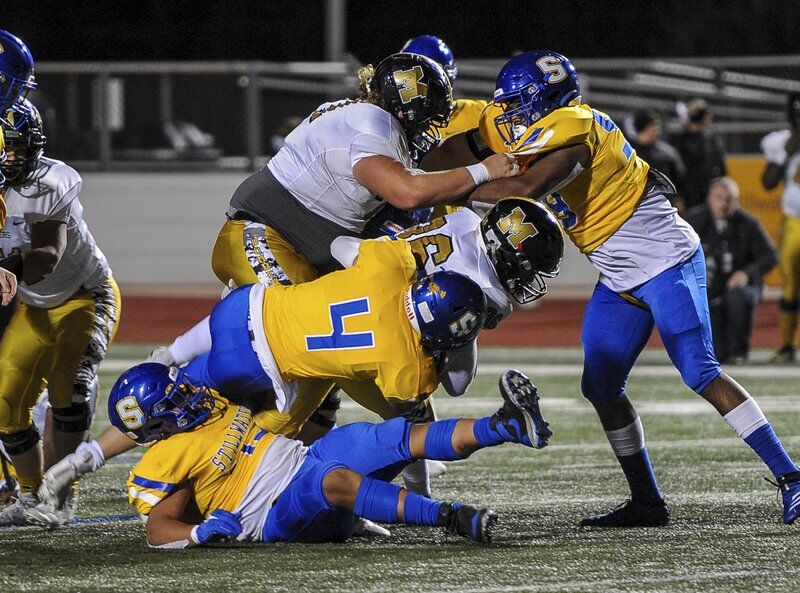 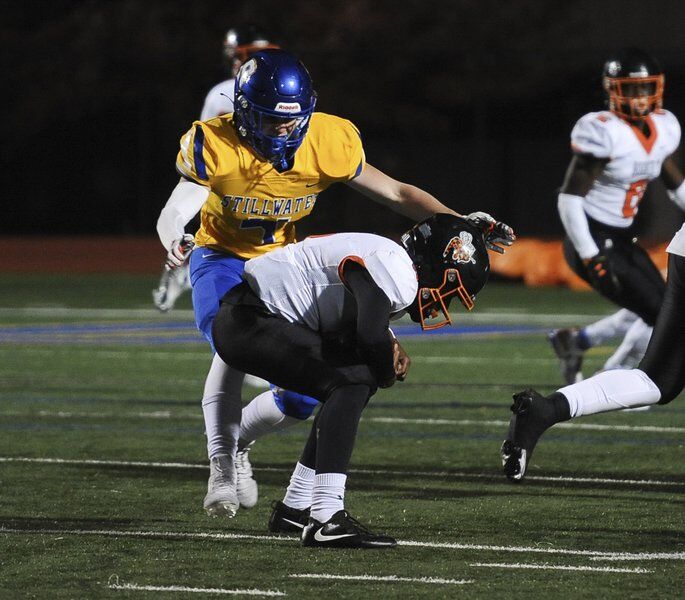 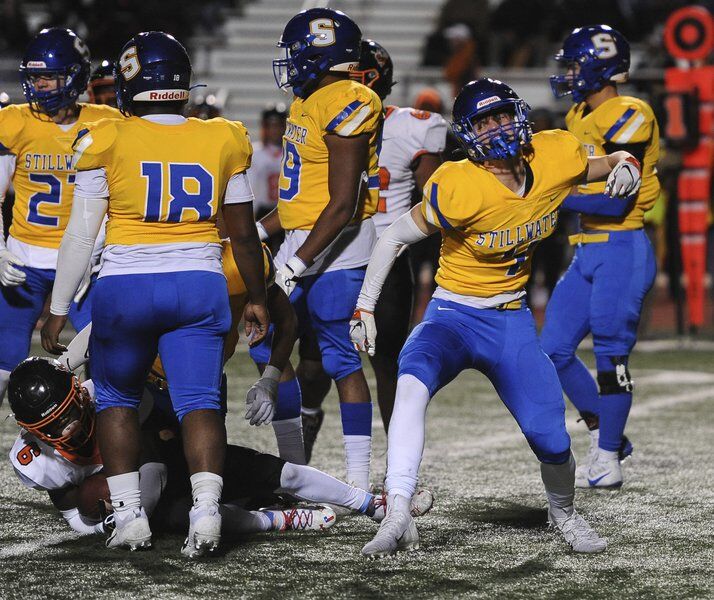 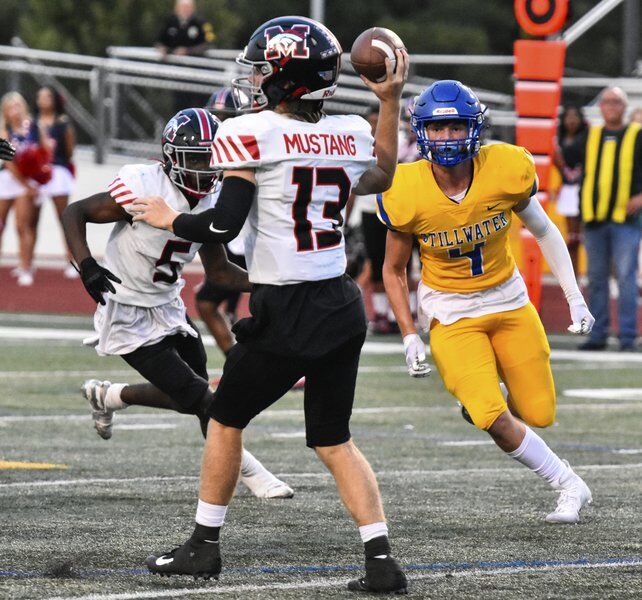 Photos by Jason Elmquist/Stillwater News Press Stillwater High senior linebacker Chance Clements clings onto a Booker T. Washington running back, allowing his teammates to bring down the back for a loss during last week’s playoff game at Pioneer Stadium.

When Chance Clements started playing football, he didn’t envision himself as a linebacker.

Then he shifted to a completely different role. Although Clements hasn’t followed in his dad’s footsteps as a lineman, they now share a dedication to defense.

“My junior year, I was like, ‘OK, I’ll try out defense,’ and then I got moved to linebacker,” Clements said. “So it’s really just that inspiration I get from (the Cowboys) and watching them play and watching my dad coach them up.”

As a senior, Clements has found his niche at linebacker, making an impact on the Pioneers’ push into the state semifinals against Bixby. Although he missed three games with a sprained ankle, he made up for lost time, significantly contributing to Stillwater’s final two regular-season victories and a first-round playoff win against Booker T. Washington.

Coach Tucker Barnard described the matchup against the Hornets as the best game of Clements’ career.

“One of the things we were really impressed with when we watched film of him last week was his attention to detail on his assignments,” Barnard said. “Regardless of what he sees coming at him, he has a job to do, a blitz to run or an aiming point to hit. He did that really, really well last week, and of course there’s results following that.”

Despite Clements’ absence from three games, he has racked up the second-most tackles of any Pioneer. With 60 stops, he leads everyone except Garhett Reese, a junior defensive back who has recorded 61 tackles.

Against Tulsa Washington, Clements torpedoed the backfield, diving to make tackles and teaming up with junior linebacker Cameron Johnson for a critical third-down sack. Although this defensive tenacity appears natural for him, it hasn’t always been a part of his game.

Schemes and tactics aside, Clements boiled the job of a linebacker down to its essence: “You just gotta be tough.” He said he lacked some of this toughness when he switched from receiver to linebacker, but he looked to teammate Gabe Brown as an example.

Brown, an OSU commit, described how defensive players need to have a unique mentality.

“Offensive guys, they get recognized for touchdowns, big runs, big plays,” Brown said. “On defense, you’re not getting really recognized unless you make an interception, and that’s not really happening that often. So to be able to go out there and just bust your butt for your team and just know that you’re probably not gonna get as much attention for it, I think it really takes a different person and a different mindset.”

Barnard isn’t surprised Clements has this capability. As Clements physically grew – he now stands at 6-foot-2 – his skillset and his energetic personality also became apparent to the Pioneers’ coaches. Barnard and his staff realized Clements had the qualities that would allow him to thrive on defense.

“We just saw him as a linebacker, and he’s grown into it and been a really good one,” Barnard said.

It was a major adjustment from playing receiver, but Clements embraced the change. Clements was finally taking the advice of his dad, who had suggested for years that Clements should play defense. Clements said when he shared the news about his switch to linebacker, a huge smile spread across his dad’s face.

After watching Clements develop into a promising recruit, his family might have the opportunity to see him compete at the next level. He has recently visited colleges, including OSU and UCO, but hasn’t made a decision yet. Team priorities come before individual accomplishments, and Clements wants to end his high school career with a state title.

With his tough, detail-oriented approach, Clements can play a major role in working toward that goal.

“I’m gonna really focus on commitment day after we win a ring,” Clements said. “...For now, I’m just focused on winning a ring.”