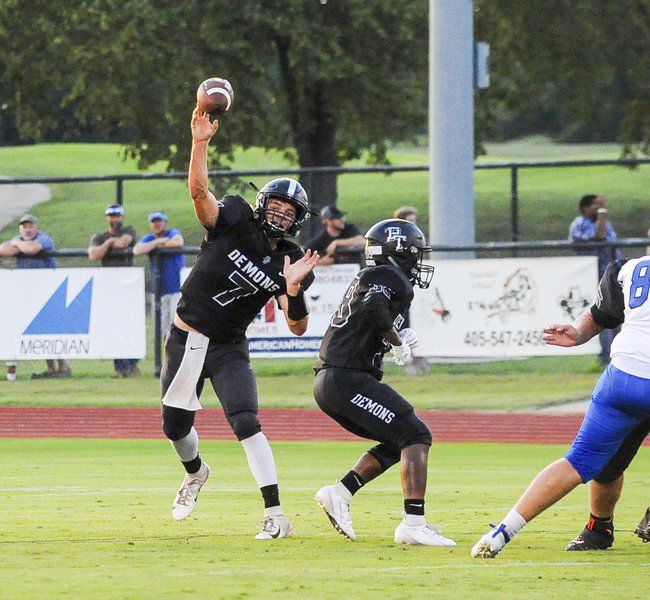 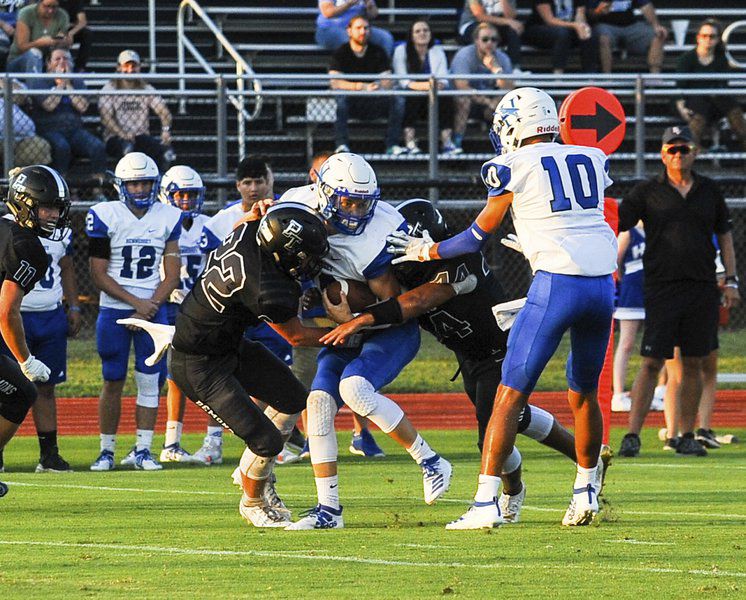 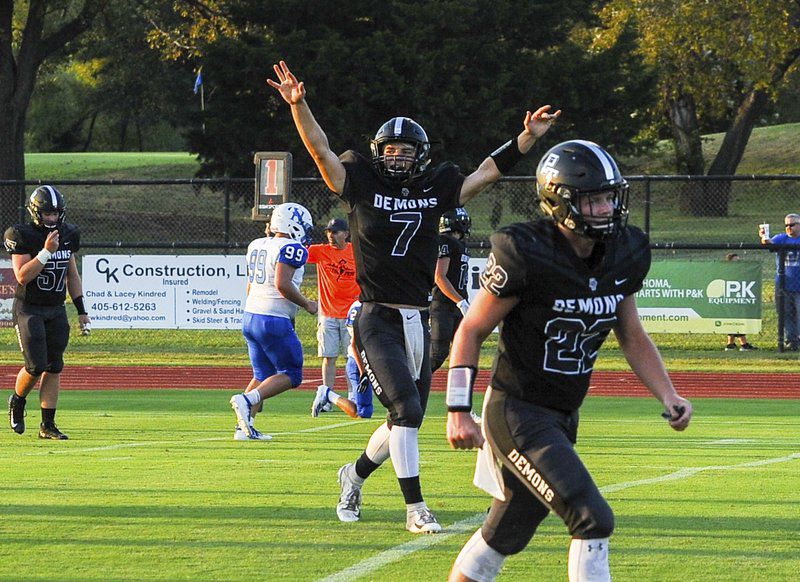 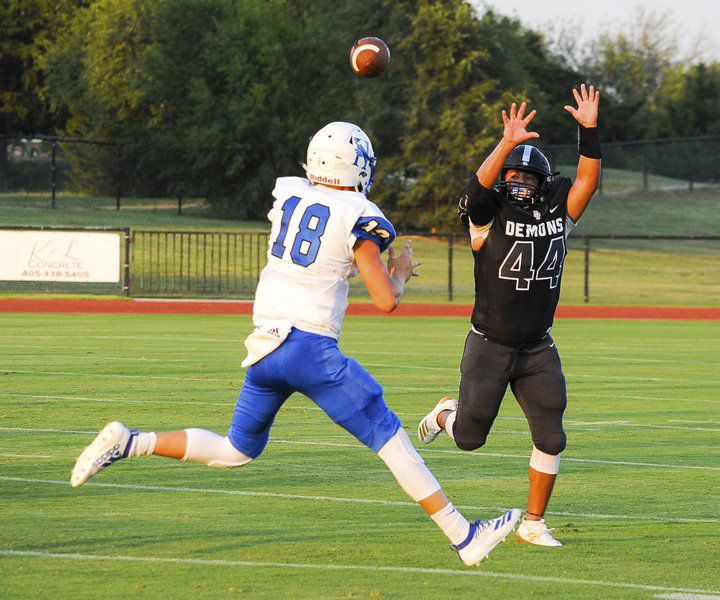 Jason Elmquist/Stillwater News Press Perkins-Tryon senior linebacker Treyson Dunigan (44) gets his hands in the face of the Hennessey quarterback during Friday's season opener in Perkins. 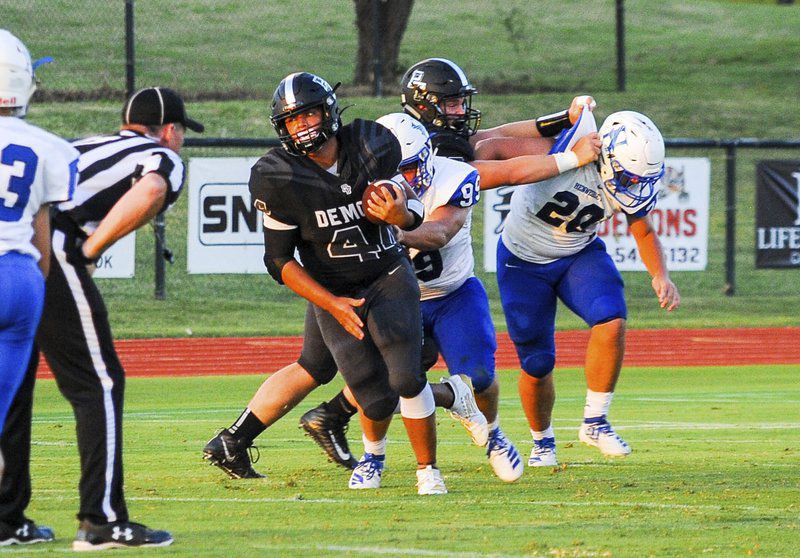 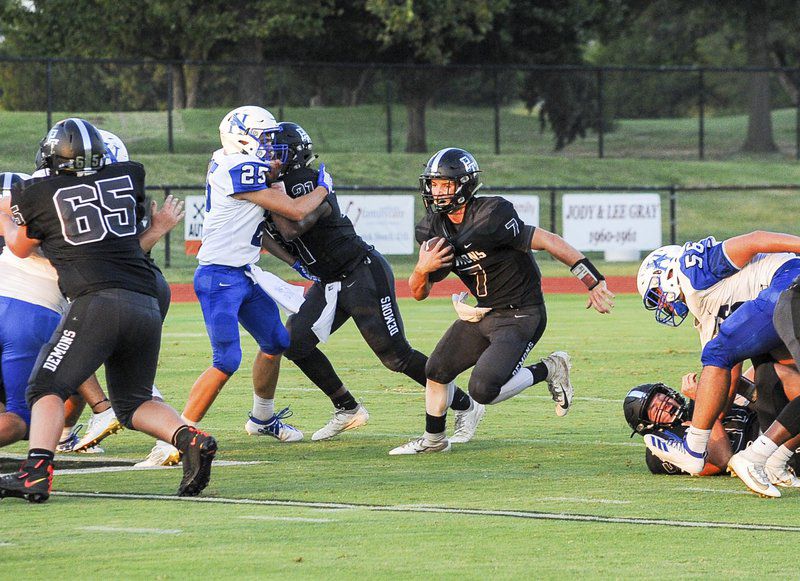 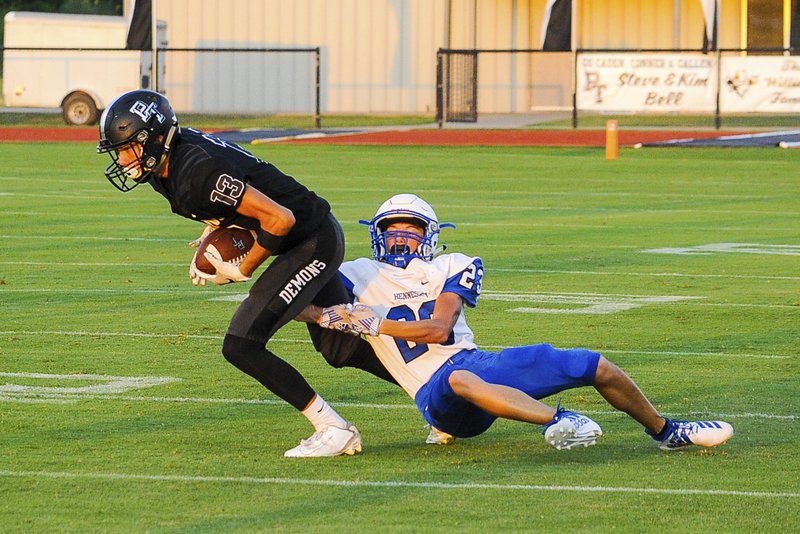 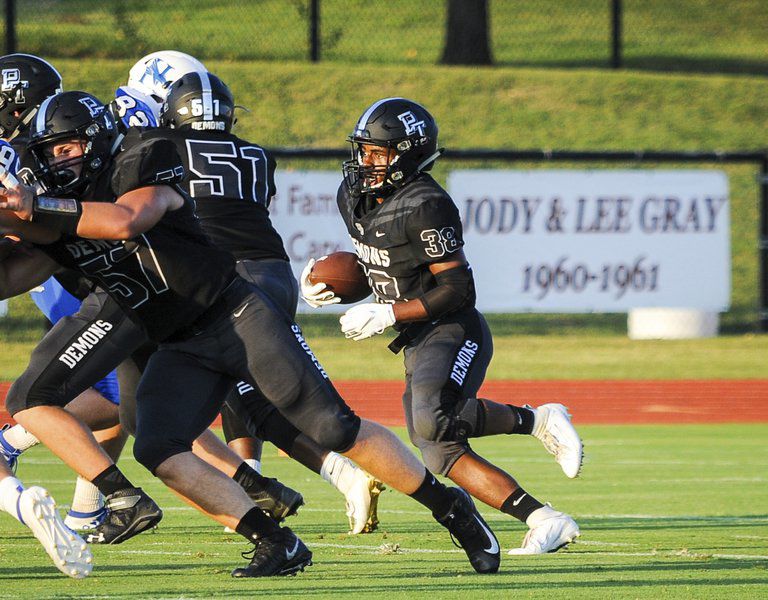 Jason Elmquist/Stillwater News Press Perkins-Tryon senior linebacker Treyson Dunigan (44) gets his hands in the face of the Hennessey quarterback during Friday's season opener in Perkins.

PERKINS – The Perkins-Tryon Demons shut out the Hennessey Eagles for the first time since 1982 at McIlvain on Field Friday night.

The Demons finished last season with a 7-3 regular season record and a first-round exit in the playoffs. The Eagles only managed two wins in 2018 and are hoping to see improvement this year.

Perkins-Tryon employed a game plan that consisted of mostly run-pass option plays and Hennessey was unable to slow them down. The Demons amassed 247 yards on the ground through quarterback Austin Mages and running back Ayron Lawson, both eclipsing 100 yards rushing, earning 107 and 102 yards respectively.

Demons coach Bruce Williams said that his team will have to lean on them going forward.

“Those are the guys that are going to make us go,” said Williams. “We’ll go as far as they go, those are our best players and we’ll utilize them as much as we can.”

The Demons started off strong, as senior quarterback Austin Mages broke off a 65-yard touchdown run midway through the first quarter. After a two-point conversion, the score stood at 8-0.

Hennessey had a promising start as quarterback Cole Joyce’s first completion went for 36 yards to running back Brysn Hunt. However, the rest of the first half saw him complete only four more passes in 16 attempts, including six- straight incompletions. He only threw one more pass in the second half.

Perkins-Tryon began to run away with the contest in the second quarter, scoring two more touchdowns. Lawson ran in a 16-yard score through a gaping hole in the defense and Mages also punched in a 7-yard run with barely over a minute left in the first half.

The Demons went into the second half with a 22-0 lead and never took their foot off the gas. The offensive line continued to create huge holes to run through as wide receiver Caleb Smith took an end-around 16 yards for a touchdown. With time running down in the third quarter, Lawson punched in one final touchdown from three yards out, putting Perkins-Tryon on top 35-0.

The Eagles tried to find ways to create offense in the fourth quarter, even resorting to putting offensive lineman Keigen Crites run the ball twice for 16 yards. It didn’t amount to any points, however, sealing Perkins-Tryon’s first shutout over Hennessey in 37 years.

Williams was happy with the win, but cited areas for his team to improve upon.

“I’ll have to go back and watch the film, but throwing and catching, we have to get a lot better at that,” Williams said. “I feel like we played pretty well up front on both sides of the ball, we missed some tackles we should’ve had, but I’m pretty pleased with the way we played. It was pretty clean for the first game of the season.”

Perkins-Tryon plays their second game of the season on the road against McLoud at 7 p.m. Friday. Hennessey continues their season with another away game against Kingfisher at the same time.