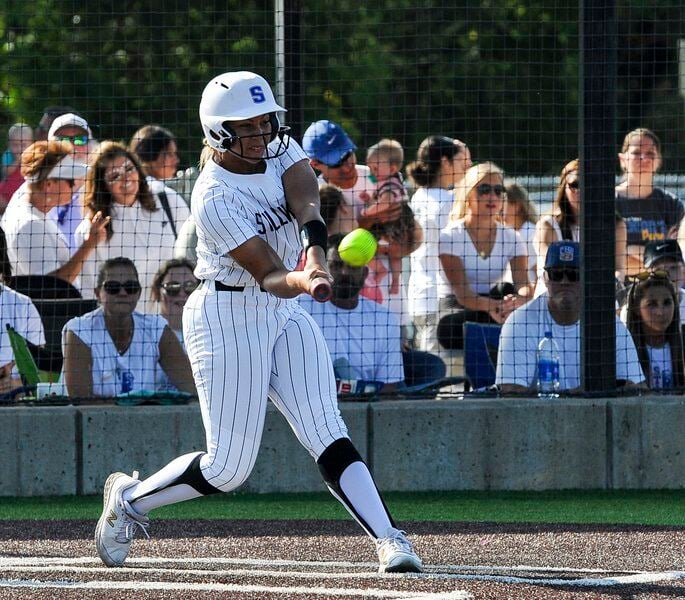 Jason Elmquist/Stillwater News Press Stillwater High senior Lyric Perry hits a home run in the sixth inning to give the Lady Pioneers an insurance run in Thursday’s regional championship game. Her power surge this season has been a boost at the heart of the lineup as Stillwater searches for its first state title in softball. 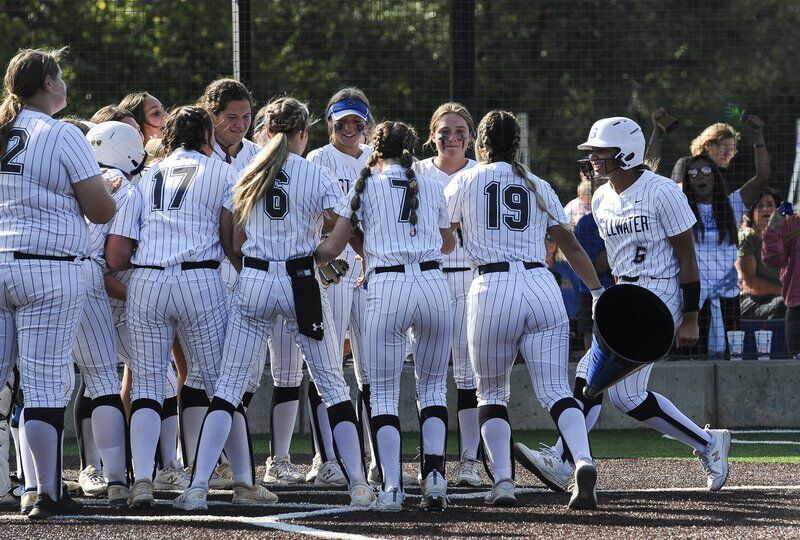 Photos by Jason Elmquist/Stillwater News Press The Stillwater High bench greets senior Lyric Perry after she hit a home run in the sixth inning to give the Lady Pioneers an insurance run in last week’s regional championship game. 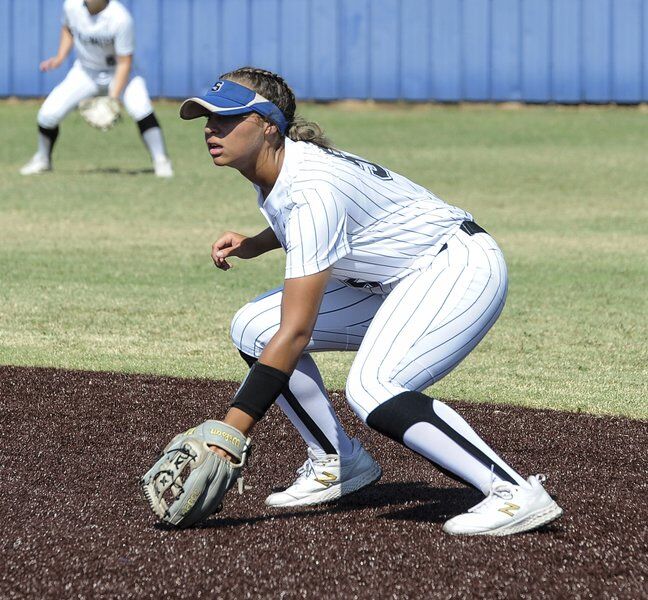 Jason Elmquist/Stillwater News Press Stillwater High senior Lyric Perry hits a home run in the sixth inning to give the Lady Pioneers an insurance run in Thursday’s regional championship game. Her power surge this season has been a boost at the heart of the lineup as Stillwater searches for its first state title in softball.

Photos by Jason Elmquist/Stillwater News Press The Stillwater High bench greets senior Lyric Perry after she hit a home run in the sixth inning to give the Lady Pioneers an insurance run in last week’s regional championship game.

At age 12, Perry begged her parents for a cellphone until she and her father, Rodney, agreed on a deal, adding a fun twist to her softball games.

All she had to do was hit a homer, and a phone would be hers.

Rodney knew she could reach the milestone anytime. Perry’s request was typical of a preteen girl, but her talent in the batter’s box set her apart from other kids her age. He had watched her step up to the plate and crank out hits that traveled far into the outfield, bringing her closer and closer to home-run territory.

One day during a travel ball game in McKinney, Texas, it finally happened. Rodney tracked the ball as it sailed out of the park, rewarding his daughter with an athletic achievement and the gift she wanted. He laughed as he recalled the memory.

As a senior second baseman on Stillwater High’s state-tournament-bound softball team, Perry no longer needs the promise of a phone to drive her when she’s at bat. Perry has established herself as the Lady Pioneers’ premier home-run hitter, accumulating 15 this season. With one more, she would tie Stillwater’s single-season record that Julia Cottrill, a junior at the University of Florida, currently holds.

Since Perry entered the starting rotation as a freshman, her power at the plate has been clear to coach Karie Linsenmeyer.

“She’s been a home run hitter all throughout,” Linsenmeyer said. “But definitely, she has improved through the years, and this is her best year as far as the numbers go.”

Perry’s consistent contributions have turned into a home-run boom. As a freshman, she hit three. She followed with six during her sophomore year and added three as a junior, but this season, Perry’s home-run spray chart would leave lines all over the field at Couch Park.

During her senior year alone, Perry has recorded three more homers than she hit throughout her first three seasons combined. This rapid increase has correlated with Perry’s newfound belief in herself.

“In the past, I’ve really struggled with confidence and just a lot of pressure on myself, just wanting to do good for my team, obviously,” Perry said. “But I think confidence has a really big factor on how I’m hitting this year.”

Perry mentioned her dad and her travel ball coach, Olympic athlete Kelsey Stewart – who is also her cousin – as mentors who have helped her overcome self-doubt.

Rodney doesn’t like to give himself much credit in this role, preferring to point out the influence of Perry’s other family members. He and Perry’s mother, Marcie, describe themselves as simply the “taxi” to drive her to away games and travel ball tournaments, but they are also her original fans.

Perry’s love for softball took root in Kansas, where she lived until November of her eighth-grade year.

“We did T-ball,” Rodney said. “I didn’t know for sure if she was really gonna like it. Then we went to parent pitch, and she really enjoyed it.”

When Rodney accepted a job offer in Oklahoma, where Marcie was already working, Perry took her softball career to Stillwater, but she has maintained ties to the Sunflower State, competing on Stewart’s Blitz travel team. Throughout fall seasons in Stillwater and summers with the Blitz, Rodney has motivated her.

“He’s been my rock since I was little,” Perry said. “He’s always taken me out to hit whenever I needed it, pushing me to be the best I can be.”

Rodney and Marcie have seen Perry’s confidence grow in tandem with her abilities.

Before her inaugural homer in Texas, a coach once asked for a show of hands of kids who could hit home runs, and Perry’s hand remained down, though she was blasting the ball farther than most of her peers could.

After hitting her first one, she finished the travel ball season with 10, her parents remembered. Perry had a knack for power hitting on club teams, but she needed some time to translate this pattern to high school games.

“Couldn’t be more proud,” Marcie said. “We knew she had it in her, and I’m just glad that she has taken all of her skills and put them to work this year.”

The Lady Pioneers will rely on Perry’s talent when they compete in the Class 6A State Softball Tournament starting Thursday at USA Hall of Fame Stadium in Oklahoma City.

After the postseason ends, Perry will shift her focus to recruitment. Marcie said Perry hasn’t made a decision about college ball, but she has multiple prospects.

Her parents look forward to following her career at the next level, and most of all, Rodney wants to make sure she keeps her spirits up. He has fueled her competitiveness with strategies such as the cellphone agreement, but he also puts everything in perspective with one heartfelt reminder.

“Don’t let anybody steal your joy.

“If you’re not happy with what you’re doing, you won’t do well, so just go have fun,” Rodney said. “Who cares, you make a mistake, so what? Just go on. You just make up for it, and just have a good time.”

Perry’s home-run parade has fueled this joy, and each out-of-the-park hit takes on its own character.

There’s the dinger that zoomed far over the fence during a home victory against Sand Springs, falling somewhere beneath the outfield trees. She hit a towering homer at Oklahoma Christian University’s ballpark, which has a larger outfield than the one she knows well at Couch Park. Then there was the rocket above left field against Norman North, adding the final run in the 2-0 victory that sent the Lady Pioneers to state.

She just had to start somewhere.