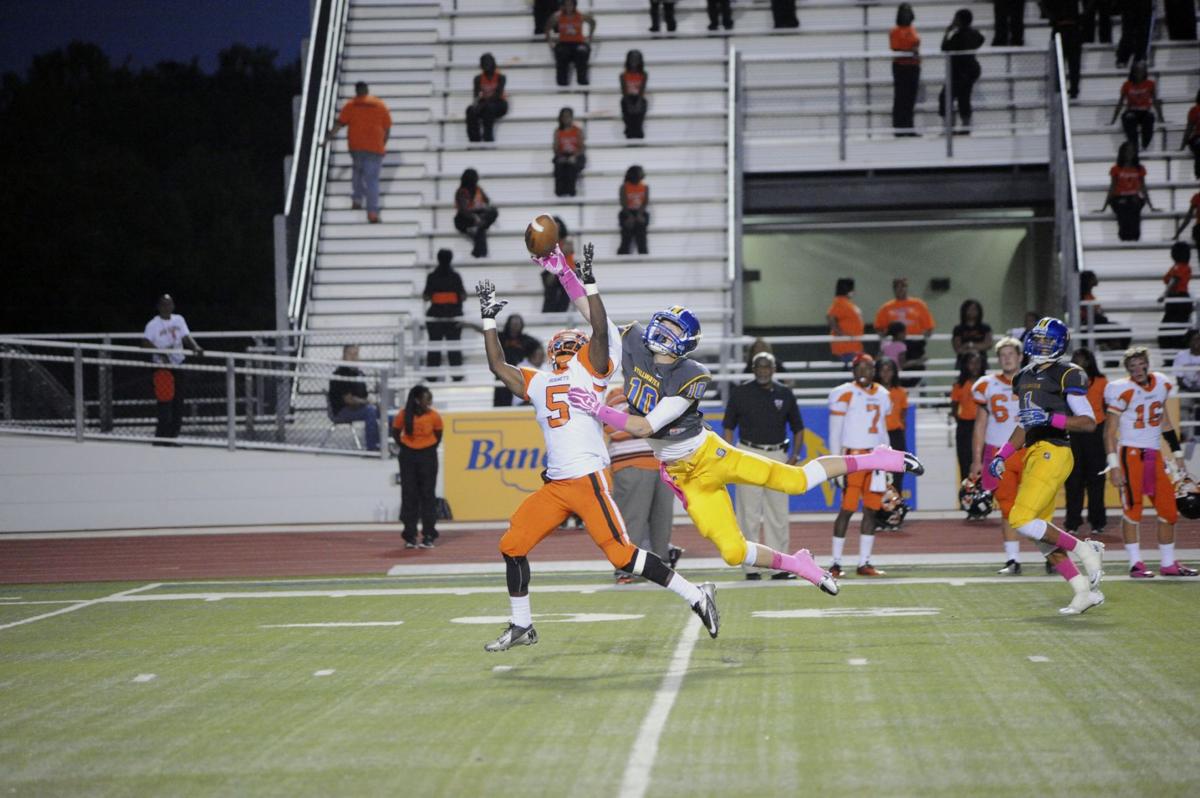 Stillwater High receiver Jon Littell (10) dives to bat away an overthrown pass to prevent an interception during the first half of Friday's game against Booker T. Washington. 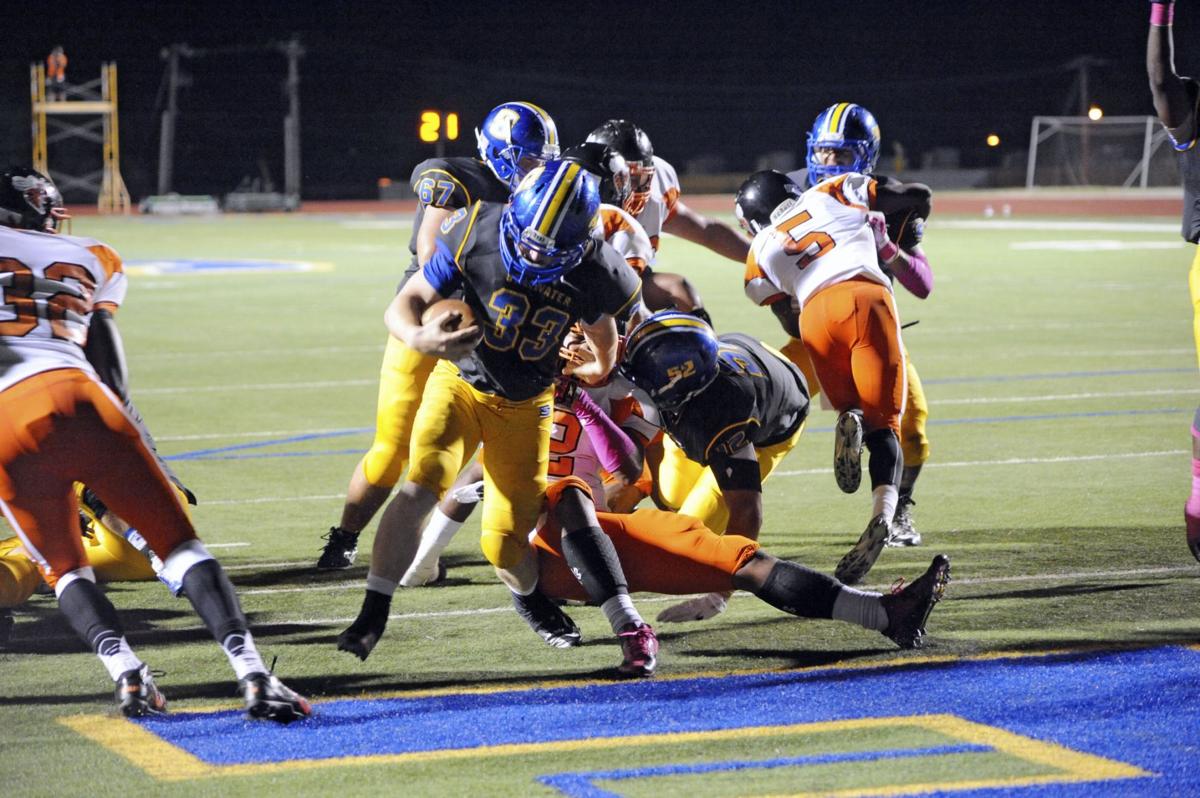 Stillwater High running back Cameron Mayberry rushes up the middle for a touchdown right before halftime during Friday's district game with Booker T. Washington at Pioneer Stadium. 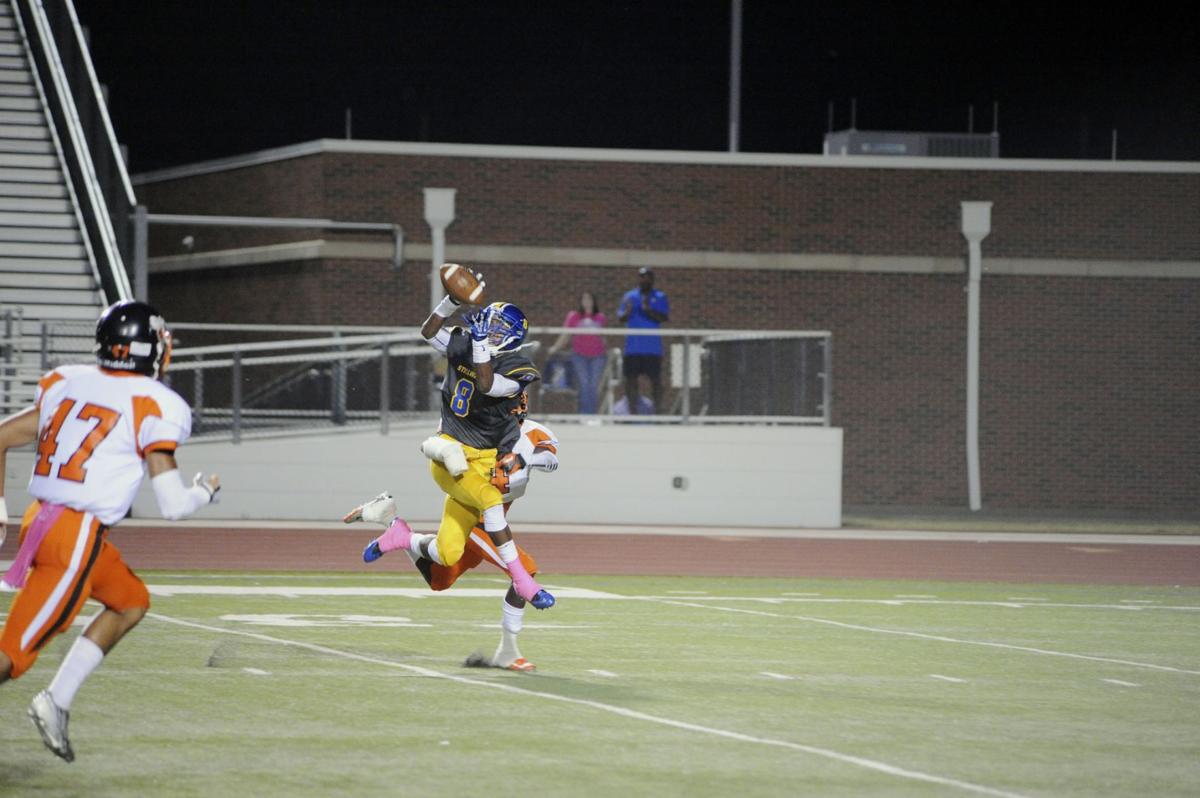 Stillwater High receiver Jon Littell (10) dives to bat away an overthrown pass to prevent an interception during the first half of Friday's game against Booker T. Washington.

Stillwater High running back Cameron Mayberry rushes up the middle for a touchdown right before halftime during Friday's district game with Booker T. Washington at Pioneer Stadium.

There are nightmares and then there’s what happened to the Stillwater High School football team against Booker T. Washington Friday at Pioneer Stadium.

That’s exactly what happened during the 41-13 loss to Washington Friday as Stillwater quarterback Braxton Noble went down during a scramble on fourth-and-4 at the Washington 42-yard line during Pioneers’ opening drive of the third quarter. No matter how hard the Pioneers tried, Stillwater (1-5, 1-2 in district) never could recover emotionally or physically, giving up 28 unanswered points in the second half in the loss.

“We just didn’t seem to come out of it after that,” Pioneer Coach Tucker Barnard said. “We lost a couple guys again, a linebacker and a safety. Another linebacker had a significant limp. Things just kind of went down hill.”

After playing even with Washington (4-2, 2-1 in district) for the first half, things deteriorated quickly after Noble’s injury.

The Hornets scored on four of the first five second-half possessions after Noble went down. Washington scored on nearly identical touchdown drives in the third quarter, the last a 19-yard strike to Arlando Johnson that gave Washington a 27-13 lead.

The Hornets added another touchdown with 10:17 left in the fourth before Hill’s second touchdown of the game — a 12-yard scamper — iced the game.

“I feel like our team came out kind of flat,” Stillwater junior Marlon McDonald said. “We weren’t as hyped as we were at the beginning of the game. We just need to work on our second-half effort. It’s always the second half where we struggle. Our second half has to be big.”

Washington grabbed the early lead, throwing the ball just one time in its opening drive and relying heavily on Deonta Owens. Owens capped a seven-play, 53-yard drive with a 1-yard score to give the Hornets a 7-0 lead with 8:47 left in the first quarter.

After Stillwater’s offense stalled in its opening drive, it looked like the Hornets were going to drive right back down the field and score, but McDonald had other ideas.

McDonald blocked and recovered Luke Beasley’s punt, taking it 35 yards for the score, but the Pioneers missed the extra point.

“I just got lucky and got to be in the right place at the right time,” McDonald said. “It just happened to bounce in my hands and after that I knew I had to score.”

It didn’t take long for Washington to answer. Four plays into the ensuing drive, Cordale Grundy found Anthony Walker for a 42-yard strike. Even with the blocked extra point, Washington took a 13-7 lead into the second quarter.

Washington threatened to add to its lead, but again McDonald was Johnny-on-the-spot, recovering a fumble at Stillwater’s 16-yard line.

“Marlon had a great week of practice,” Barnard said. “We’re proud of him and he’s turning into a great football player. He’s a guy that I’m asking as the game is wearing on to step up and be that emotional leader that we were looking for.

That proved to be the spark the Pioneers needed as they drove down the field in 11 plays — aided by a 36-yard reception by Brandon Prather — before Cameron Mayberry punched it in on fourth-and-1 with 42 seconds left in the half to tie the game at 13-13.

“That was a great drive,” Barnard said. “We felt really good at that point. I think we felt both offensively and defensively like we found some answers that we needed, but for whatever reason we weren’t able to continue that in the second half.”