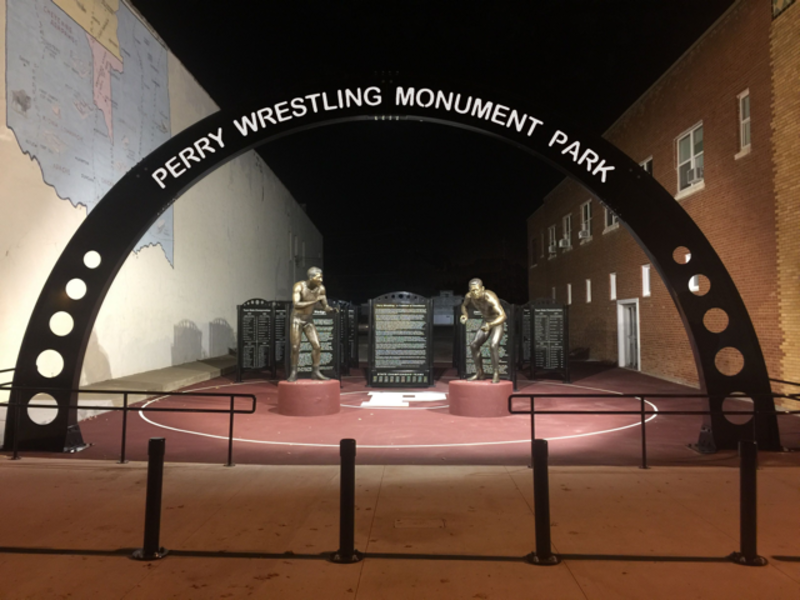 Courtesy of Chance Leonard The Perry Wrestling Monument Park was opened last year with Chance Leonard, executive director of the documentary "The Price of Legacy," helping raise $325,000 to fund the memorial.

Courtesy of Chance Leonard The movie poster for the upcoming documentary about Perry Wrestling, scheduled to be released sometime this fall in time for the Maroons' 2017-18 wrestling season.

Courtesy of Chance Leonard The Perry Wrestling Monument Park was opened last year with Chance Leonard, executive director of the documentary "The Price of Legacy," helping raise $325,000 to fund the memorial.

Courtesy of Chance Leonard The movie poster for the upcoming documentary about Perry Wrestling, scheduled to be released sometime this fall in time for the Maroons' 2017-18 wrestling season.

PERRY – Chance Leonard is grateful to the sport of wrestling, and he’s paying it back big time.

Leonard is the executive producer on the upcoming documentary “The Price of Legacy” that takes a look at the town of Perry and its wrestling tradition.

A Maroon himself in the 1980s, Leonard traveled the country after attending the University of Oklahoma. Although there was wrestling in many of the states he lived, he just didn’t think it had that much of an impact as it did in Oklahoma.

When Leonard got an opportunity to move back to Perry three years ago, he was comforted by the fact that in the many years he was gone, the town had hardly changed.

There were some new businesses, yes, as what happens with any town trying to survive in the 21st Century, but there were two things that were the same: The people and the Perry Maroon high school wrestling team.

Leonard, a board member of the Perry Wrestling Foundation, wanted to give back to the city with a population of just over 5,000, and to the wrestling team that had taught him so much.

First, he was instrumental in helping build the Perry Wrestling Monument Park. After that, Leonard wanted to do something else that could live through the generations.

He wanted to make a movie.

"I got to spend time in my hometown and I got to see people I had been around growing up and friends that I graduated with,” Leonard said. “We all shared a lot in common about where we grew up and the people we had been around, the coaching staff and the people that mentored and shaped me in many different ways that have helped in my personal success. I really wanted to shape the story and I took the steps to put a team together that could really help me bring this story to life.”

Leonard went about finding a film crew and getting people to donate to the project. While he hadn’t had any experience working in film, he knew how to fundraise.

The film is sponsored by local companies such as Ditch Witch, First Bank&Trust and Exchange Bank along with being partnered with wrestling mainstays including the National Wrestling Hall of Fame and USA Wrestling.

Now that the money was raised, the crew started filming and captured Perry winning the 2017 Class 3A state title for the program’s 41st team championship, continuing its streak of never going more than two years without a state title, a streak that began in 1961.

Although the movie is told through the eyes of current and former wrestlers such as professional wrestler Jack Hager, known as Jack Swagger in the ring, Leonard also wants people to know about the people and the history of Perry.

“That’s what this story is about,” Leonard said. “It’s about community, it’s about people, it’s about tradition and legacy and the commitment to that and to those things that really cause community to stay focused on the things that matters to it most and as I say, this is about a community of people passed down from generation to generation, all of these intangible qualities whether they wrestled or not to have those qualities that help them succeed in society.”

The documentary is still filming, but Leonard said he hopes for the release date to be at or around the time Perry’s next wrestling season begins in October.

Leonard said the film will be available on streaming services such as Netflix or Hulu, but he’s wanting to have a big premiere, one that he can invite the whole town of Perry to, as well as coaches from around the state.

The town has been welcoming of the documentary crew as well, with Leonard saying the film isn’t just a love letter to it but to any small town in America that doesn’t get the recognition it deserves.

“I think (the townspeople) have been true to who they are,” Leonard said. “They have been appreciative and humble ... I think there is a lot of excitement that a documentary is being produced. It will be full of truth and a shining example about what is truly important.”

Since the film is partnered with the Hall of Fame, Leonard said he has been in talks with the Hall’s Executive Director Lee Roy Smith about possibly having the film be put in there for future generations to see.

Leonard said while the film is a passion project and he wants people in the sport to fall in love with it and give the people of Perry something to be proud of, he wants to bring wrestling to a bigger audience as well. That’s the main thing he wants to do with it.

“It’s the most inclusive sport that there is,” Leonard said. “Everybody can participate whether you are male or female, tall or short, you could weigh 100 pounds or 285 pounds, even if you have a perceived disability, a missing limb, you can still participate in the sport and gain from the wisdom that the sport teaches.

“It’s also about the tradition and what is the price of legacy, not only creating it but sustaining it.”

Keep updated with the film and when the official release date is announced by following @PriceOfLegacy on Twitter or going to The Price of Legacy on Facebook.