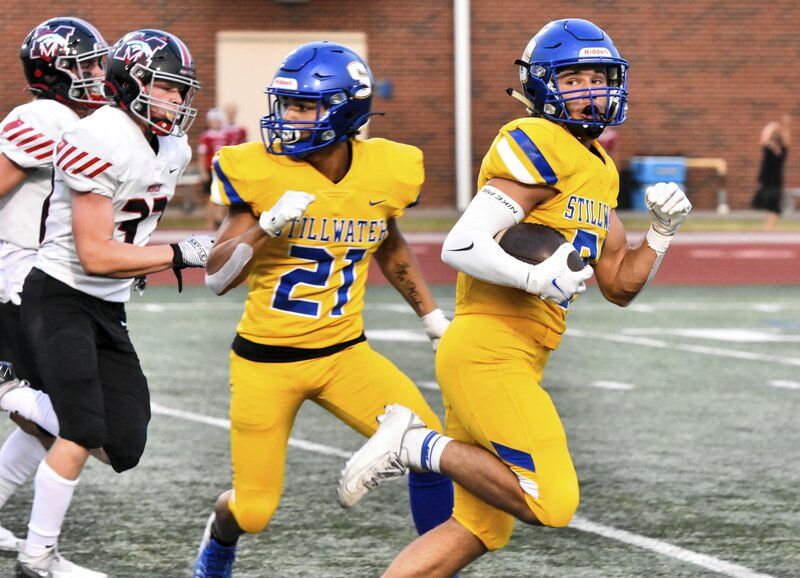 Jason Elmquist/Stillwater News Press Stillwater High receiver Ty Smithon, right, looks over his shoulder on his way to the end zone after hauling in a pass from Gage Gundy during Friday’s home opener. 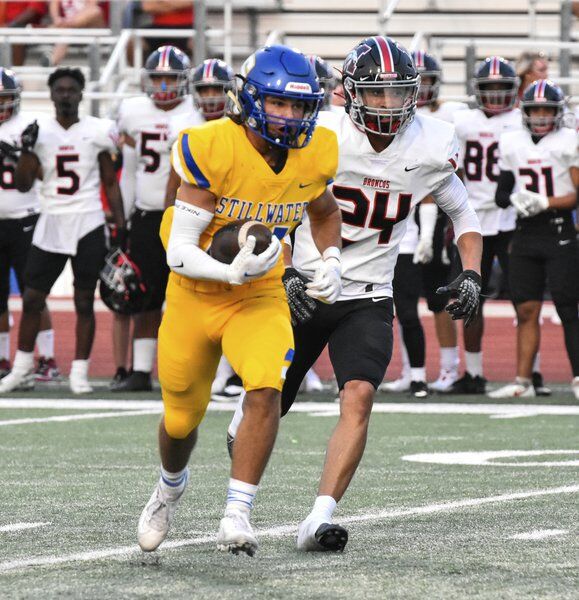 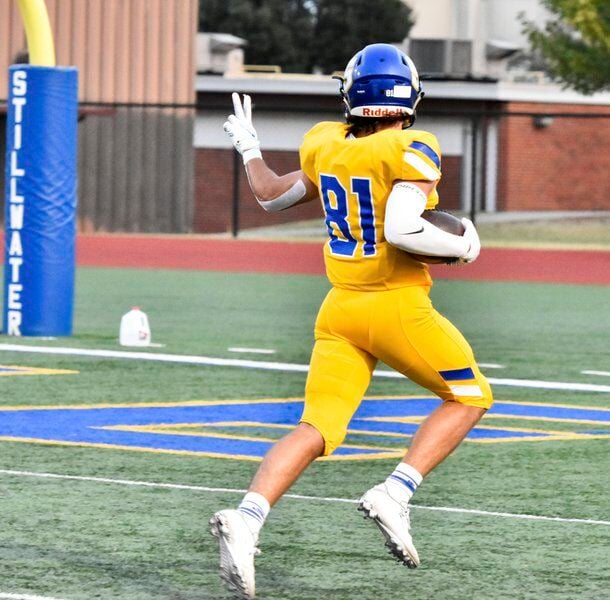 Jason Elmquist/Stillwater News Press Stillwater High receiver Ty Smithon, right, looks over his shoulder on his way to the end zone after hauling in a pass from Gage Gundy during Friday’s home opener.

Ty Smithton had major responsibilities in a high-pressure situation.

As the Stillwater High football team competed against Choctaw for a spot in the 2020 state title game, injuries were wearing on the Pioneers. With Steven Brown and Donnell Wagner unable to play through the end, then-junior Smithton became the only available wide receiver who regularly started.

Although the Pioneers fell to the Yellowjackets 38-35 because of a last-second field goal, Smithton provided a few points of pride during a heartbreaking game for Stillwater. He made the most of his three catches, scoring two touchdowns and accumulating 122 receiving yards.

Smithton had previously stepped into a consistent role on offense, but that night was a landmark game for him.

“In my mind, that was when he really emerged onto the scene as not just another player on the team,” coach Tucker Barnard said. “Not just another piece of the machine, but really a big, important, big-time player in our program.”

Since then, Smithton has continued to fill a key spot for the Pioneers, embracing his status as a seasoned player, and his presence in the starting lineup is more significant this season than ever before. Smithton, Tayveon Morton and JaKobe Sanders are the only returning starters on offense, and Smithton is the sole returner in an offensive skill position – Morton and Sanders are linemen.

Smithton doesn’t shy away from leadership, instead welcoming the pressure it brings.

“It’s a lot more fun when you’re a senior knowing people are depending on you,” Smithton said. “You’ve gotta work so much harder to do your best to make the team win.”

This week, Smithton has extra energy as he prepares for a highly anticipated rivalry. The Pioneers are facing Bixby at 7 p.m. Friday on the road, and though Smithton has never played a snap against the Spartans, he is familiar with the matchup’s ultra-competitive nature.

During Stillwater’s most recent meeting with Bixby, Smithton was a sophomore on the sidelines. He watched as the Pioneers, including his older brother, Jack Smithton, went toe-to-toe with the Spartans, who claimed the 2019 state title with a 40-36 victory.

Despite the loss, the younger Smithton remembers the thrill of the game.

“It was so exciting,” Smithton said. “It was just crazy. It was really back and forth, and I’m excited because it’s a whole new team now.”

While Jack was active on that championship runner-up squad, Ty mostly played in junior varsity games that year. Barnard said it was a solid season for him, and Smithton’s athletic skill wasn’t the only quality that stood out to Barnard.

Two years later, Smithton stays true to his dynamic personality, but he has also settled in as a steady mentor for underclassmen who are eager for varsity time as he once was. Barnard said he has noticed Smithton taking the time to work with teammates such as Mark Janus, a sophomore receiver, in practice.

Mason Butler, a senior and first-year starter, described Smithton as “an amazing leader.”

“Ty’s always been the same person, just a character to be around,” Butler said. “I love Ty. He’s a great dude. … He brings up the mood on the team a lot, a whole lot.”

Although Smithton has had to take on additional responsibilities as the offense’s most experienced skill player, this new level of leadership is also a continuation of a journey that started in early childhood.

Smithton, whose father is a former Oklahoma State cornerback, doesn’t remember life without football. He played flag football before starting school, and he has been catching passes from quarterback Gage Gundy for years.

Now, Smithton is balancing his commitment to his senior season with possible plans for the next steps after graduation.

Barnard said some schools have been in contact with him about Smithton potentially playing college football, but Smithton is still weighing his options. As the son of doctors of osteopathic medicine who practice in Stillwater, Smithton also recognizes education as a priority, and Barnard said Smithton has considered studying engineering.

Regardless of Smithton’s long-term focus, he has three distinct objectives for the near future.

Smithton said he wants to claim a district title, go on to win state and defeat Bixby on Friday.

As a dedicated starter, he has identified several ways to make sure he can work toward those goals with as much preparation as possible.

“Just staying on the field and making sure you’re getting every single rep you can,” Smithton said. “Watching film, all these things, knowing stuff about your opponent that other people don’t, so you can just really beat the defense.”