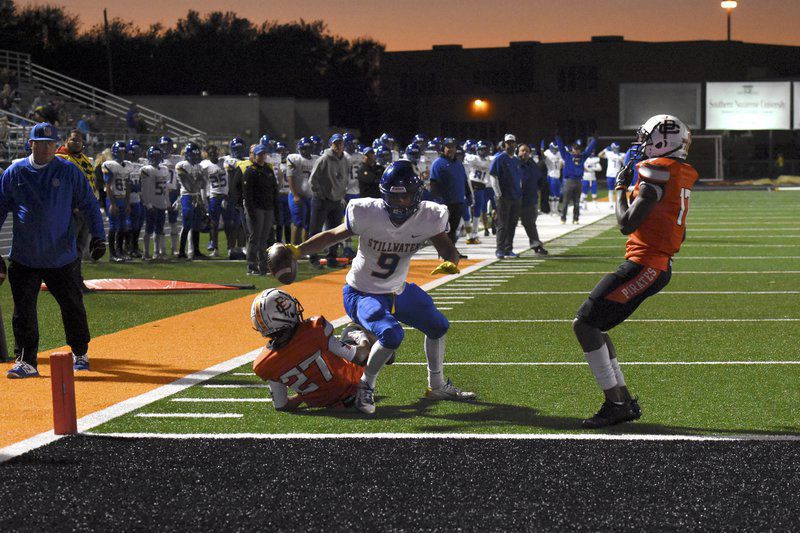 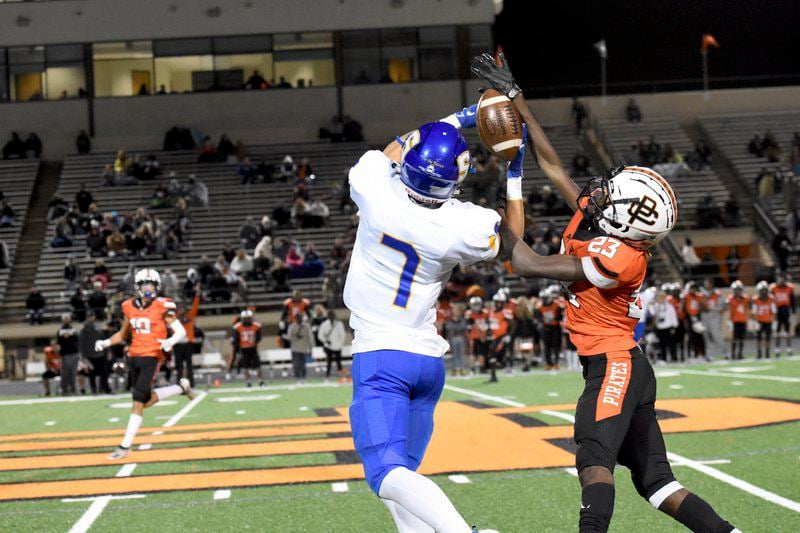 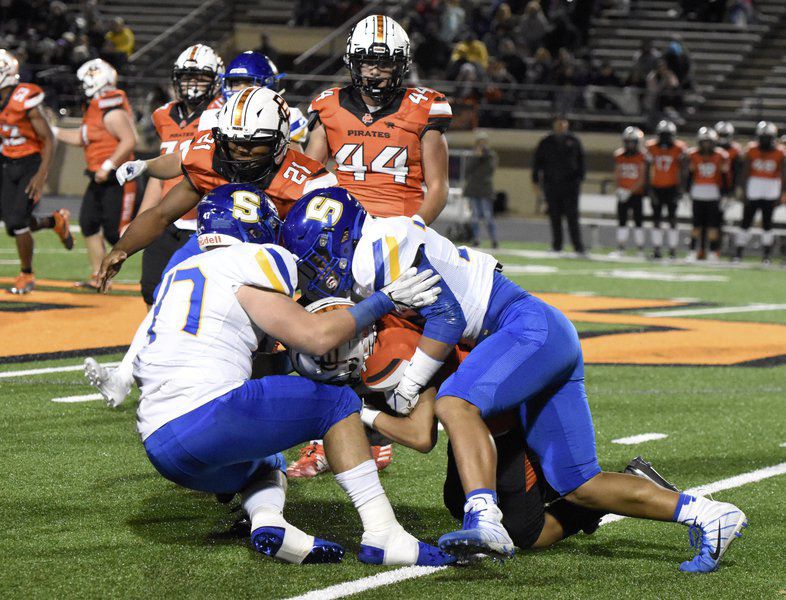 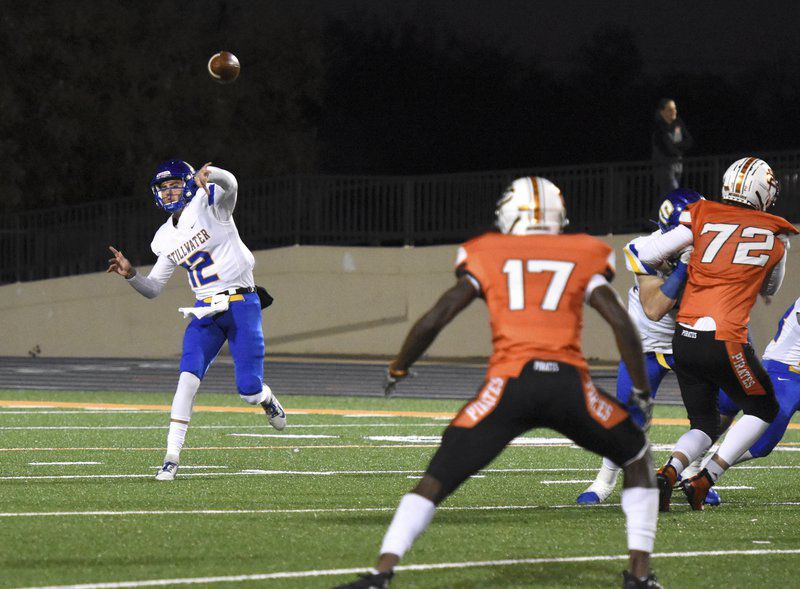 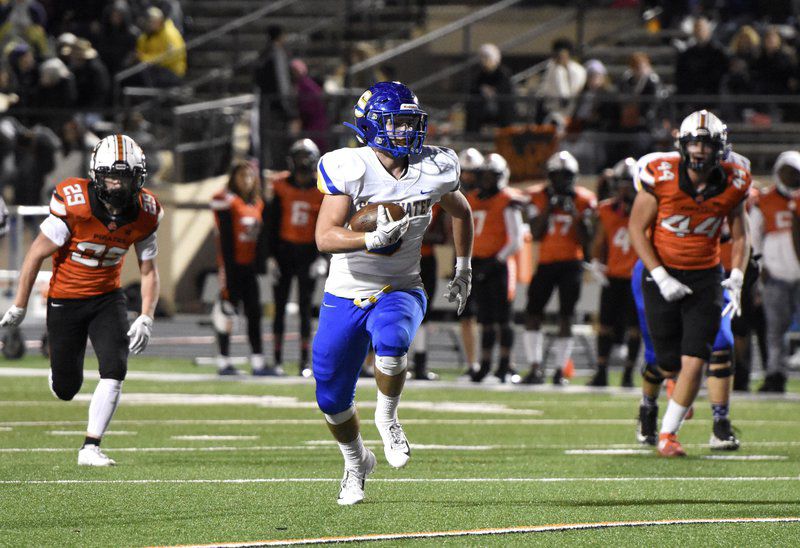 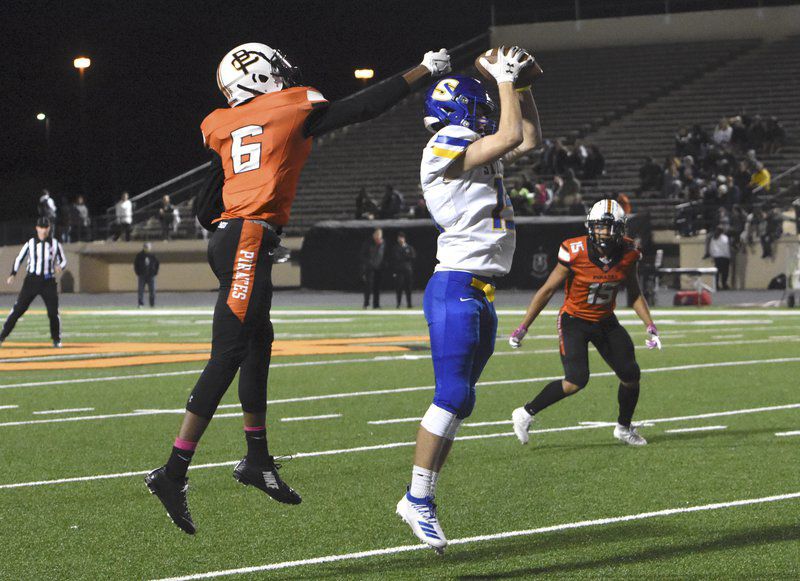 WARR ACRES – Anthony Bland returned to the gridiron Friday night and made his presence known early and often.

The Stillwater High senior wide receiver, who left the game two weeks ago with a walking boot, returned to the field after missing last week’s road contest. Bland was targeted often – as he normally is – by senior quarterback Gunnar Gundy throughout the first quarter.

That was his only quarter of action, but he shook off any rust, if there was any to shake off.

“I didn’t know I’d be out there as long as I was or do as much as I did, but it was fun,” Bland said. “It was good to get back to doing what we were doing before.

Bland and the Pioneers rolled to victory, defeating Putnam City 69-6 and remaining unbeaten on the season. It was their ninth-straight blowout win, with the season opener being the closest contest of the year.

A running clock sped things up in the second half, which has almost become a normal routine for the Pioneers. SHS coach Tucker Barnard joked he’d like the same thing next week when Stillwater (9-0 overall, 6-0 district) hosts Del City for the Class 6A-II-1 district title.

“We’d like to finish that one at half, too,” Barnard said laughing. “It probably doesn’t work out that way. We’ve got to peek at them a bit on video. They look really good. It’s going to be a really tough game.”

Being healthy, but also being physically ready for the Del City contest was one of Bland’s reasons for returning Friday night. He lightly practiced Wednesday this week.

He caught five of Gundy’s first eight passes before finishing the night with seven receptions for 146 yards and three touchdowns. Bland didn’t return after his third score.

Bland hauled in three passes for 36 yards on the first drive, capping it with a 5-yard touchdown. A few minutes later, he caught a short pass and turned it into a 67-yard touchdown down the Stillwater sideline. He said that catch and run felt good.

“Coming into this season, I wanted to show that I can run more than people think I can,” Bland said. “It may not show in the 40, but I showed I can get away from dudes when I have the ball.”

Bland’s final score came less than four minutes – and two Pioneer touchdowns – later. After a holding call brought back a score, Gundy found Bland for back-to-back passes, the second of which was a 3-yard touchdown strike.

Friday was the first time in three games he’s eclipsed the 100-yard mark. He’s now 75 yards from breaking the 1,000-yard mark for the season.

“We really only practiced him one day and he looked pretty good,” Barnard said. “It was good to see him out here. I think he looked full speed or really close to it. That obviously makes us feel a lot better.”

Gundy ended his night at halftime. He’d completed 17 of 23 passes for 304 yards and six touchdowns. Wideout Jack Smithton caught six of his passes for 73 yards, while safety Garrick Martin added two receptions for 69 yards in his brief appearance on the offensive side of the ball.

Gundy also had a 9-yard touchdown run that was straight out of the video game classic Tecmo Bowl. He scrambled left looking for a receiver, before running backward and back to the right side of the field, while being chased by multiple Pirates. Gundy cut back, found a seam to the end zone and powered his way across the goal line.

It was one of two rushing touchdowns for Stillwater. Chris Jones, who led SHS with 85 yards on seven carries, scored the other in the third quarter.

“We wanted to throw it around a bit and early we tried to take the easy stuff they were giving us,” Barnard said. “We just executed the offense well.”

While the offense again lit up the scoreboard, the Pioneers’ defense added to the large number of points. Junior defensive back Carter Barnard, who leads the team in interceptions, picked off PC quarterback Tyrece Romesberg and returned it 24 yards to paydirt.

“I saw the quarterback just turn and throw and I happened to be in the right spot,” Carter said. “I was able to take it away. I don’t feel very fast a lot of times, but I thought I was going to score. I didn’t have very far to go.”

Carter’s dad admitted the play put a big smile on his face, especially after he joked about missing Carter’s second interception of last week’s game.

“That was fun,” coach Barnard said. “He asked me if that was one good enough to put on the highlight. I said I’d have to look at it, but if he looks slow, I’m leaving it off. I think I smiled and people could even see it. I’m happy for him.”

Trevor Benham also returned a fumble for a score. A PC punt turned bad when the punter was sent running for his life on a bad snap. He fumbled and Benham came out of the scrum of Pioneers with the ball, and easily jogged into the end zone.

The Pioneers will be back at home next Friday night for senior night and a battle with Del City (8-1, 6-0).