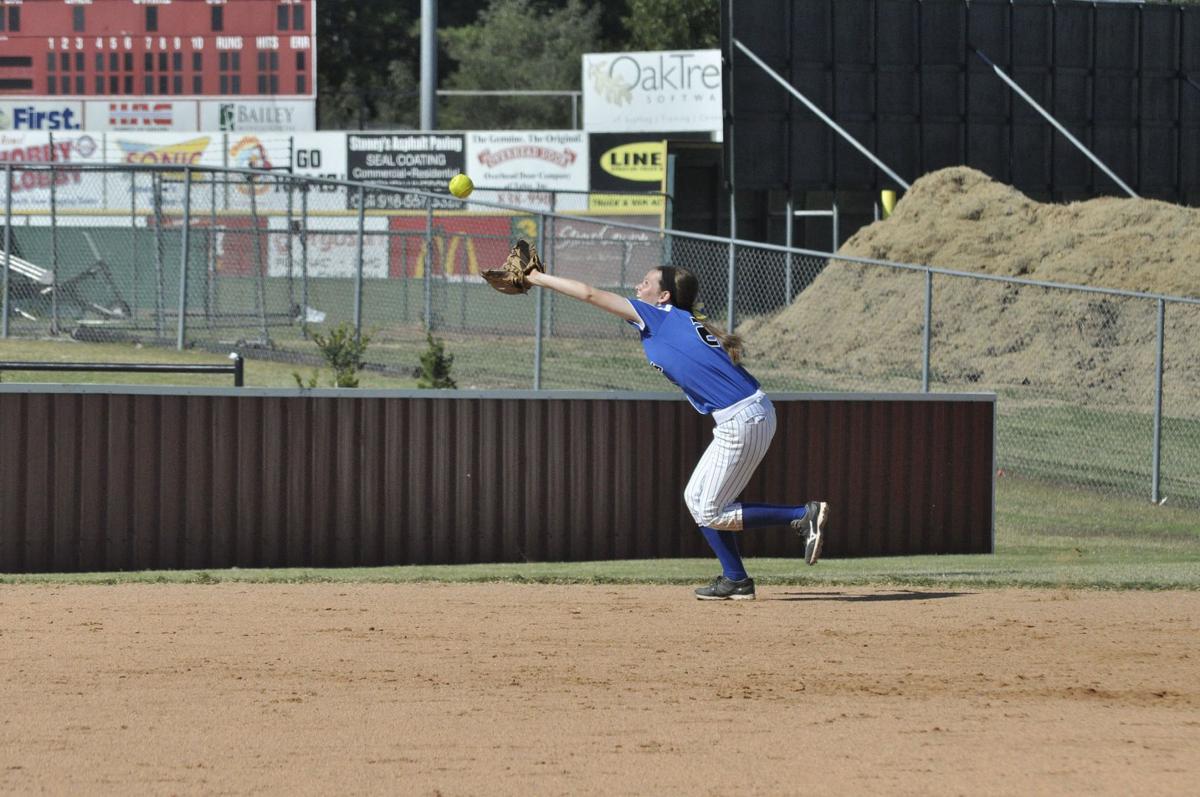 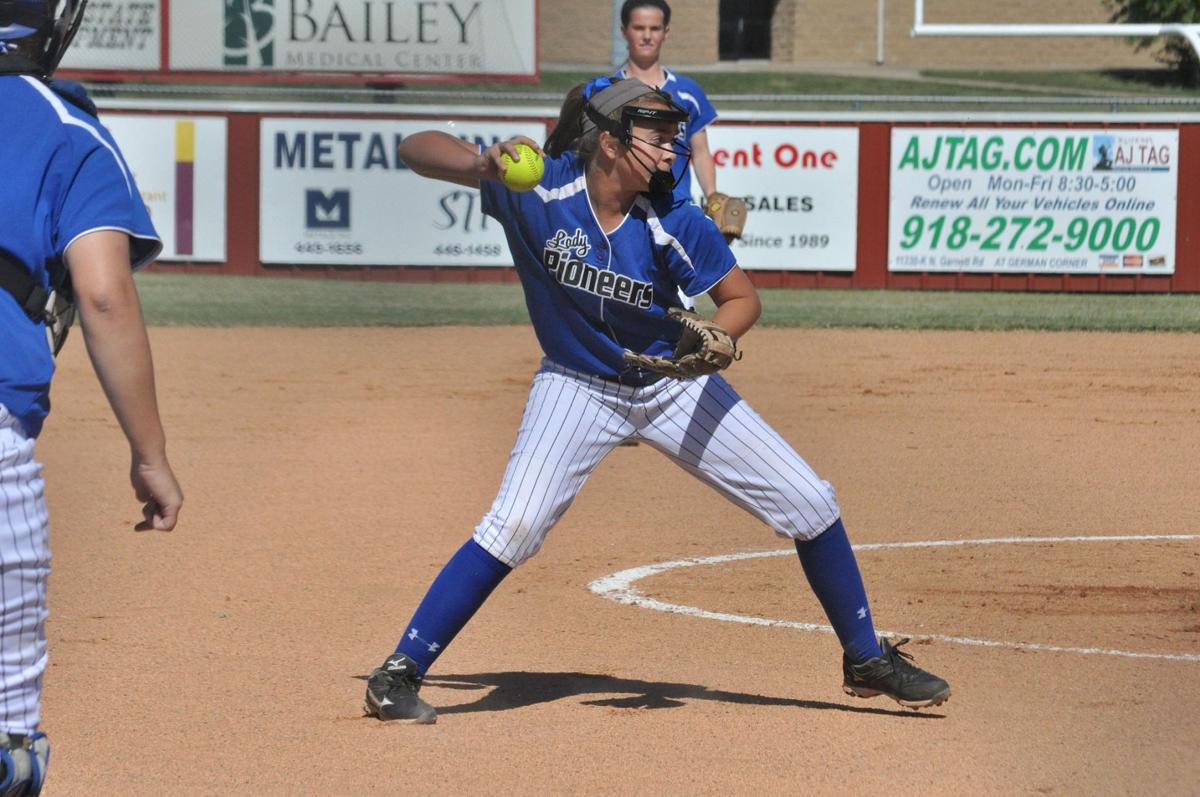 Stillwater High School pitcher Taylor Lane throws out a runner at first during a bunt attempt in the first innging of the regional game against Sand Springs in Owasso. 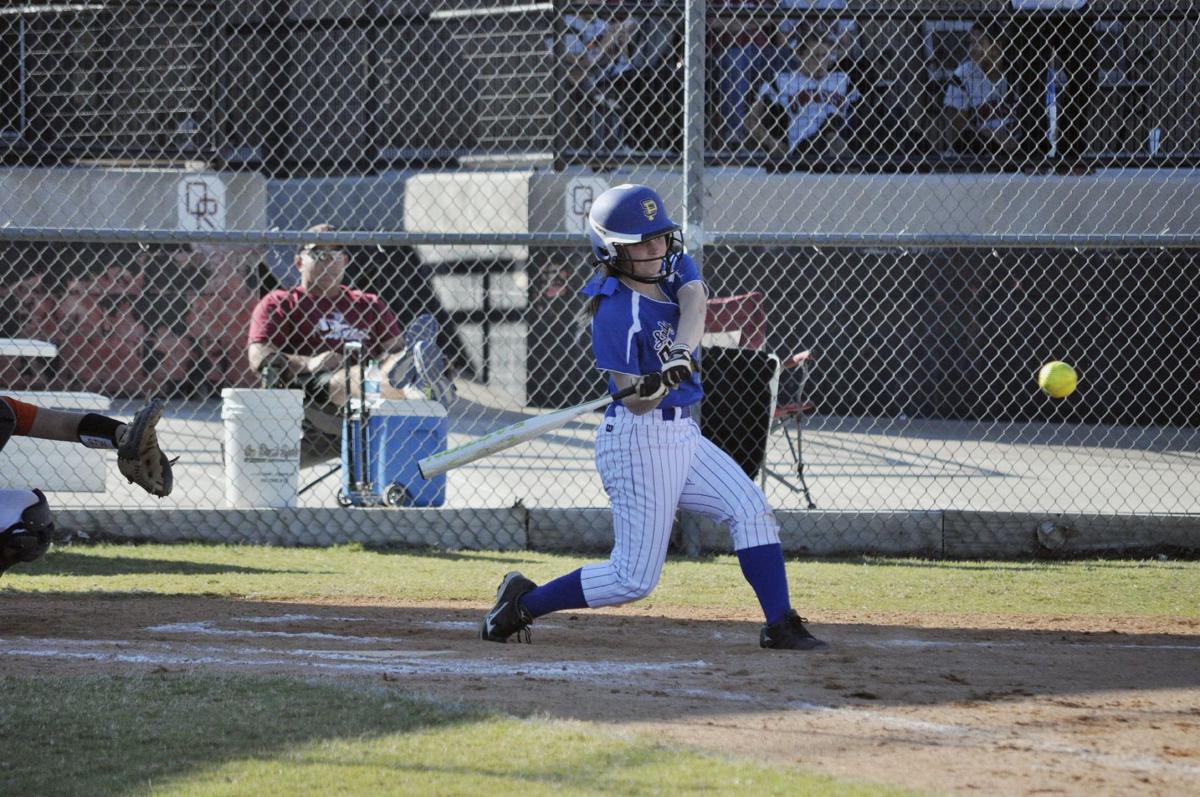 Stillwater High School senior Mackensie Stokes rips a double during the regional elimination gamea against Booker T. Washington Wednesday in Owassso. Stokes had two doubles in the X-X win over the Lady Hornets.

Stillwater High School pitcher Taylor Lane throws out a runner at first during a bunt attempt in the first innging of the regional game against Sand Springs in Owasso.

Stillwater High School senior Mackensie Stokes rips a double during the regional elimination gamea against Booker T. Washington Wednesday in Owassso. Stokes had two doubles in the X-X win over the Lady Hornets.

It wasn’t always pretty — as few elimination games are — but that’s exactly what the Lady Pioneers did with a 10-3 win over Booker T. Washington. Survived to see another day and keep the dream of a state berth alive.

“Our goal was to have one good win so we could come back and play tomorrow,” Stillwater coach Amber Davis said. “We’ll have the loser of Sand Springs and Owasso and we’ll go at them.”

A good win is a relative term in this case. The Lady Pioneers (8-17) still committed three errors, to go along with the four they committed in an 8-0 loss to Sand Springs earlier. They also only tallied 10 hits — seven of those coming in the nine-run third inning.

But for at least one inning, good was a fair assessment for the Lady Pioneers.

“It was time,” Stillwater senior McKinsey Stokes said. “We were ready to break lose. Luckily, we got it on the ground instead of up in the air and that allowed us to score those nine.”

Led by Sydney Scott’s two-run double and a three-run triple by Courtney Hughes, Stillwater finally got the offense going after falling behind to Washington 1-0 early.

“We just had to let the ball travel and let it get in our hip pocket,” Davis said. “By the third and fourth inning we finally figured it out.”

Hailey McDaniel and Cailin Fluty led off the inning with back-to-back singles before McDaniel tied the game at 1-1 on a Washington error. Halley Randolph then gave Stillwater the lead with a bloop RBI double that scored Fluty and moved Hunter White to third.

After making a pair of outstanding defensive stops early, Scott showed she’s not just a defensive player with a line drive to left that rolled between the left fielder’s legs to clear the bases.

“Sydney really stepped up to the plate,” Davis said “She had some hard shots at her and she knocked them down. Then at the plate, she really provided us with a spark.”

Following Laikyn Anderson’s single to score Scott, Stokes walked and Christy Leim reached on an error before Hughes — who started the inning by popping out to first — belted a bases-clearing triple. She later came home on Washington’s fourth error of the inning as Stillwater took a 9-1 after three innings.

After adding another run on Stokes’ second double of the game in the top of the fourth, it looked like the Lady Pioneers might be able to rest up for Friday’s game with a seemingly insurmountable lead.

But that plan nearly backfired as Washington scored two runs to close the gap to 10-3 in the fifth before a 1-2-3 double play ended the threat.

“Our mentality changed defensively,” Stokes said. “It went from, ‘Oh man, this kind of sucks,’ to ‘This is it. If we lose we’re done.’”

From there, Fluty — who came on to relieve starter Taylor Lane in the fifth — was able to settle into a groove, allowing just one runner to reach third over the final two innings.

Stokes led the team, going 2 for 3 with two doubles and an RBI, while Cailin Fluty was 3 for 4 with three singles and a run. Scott also went 1 for 4 with two RBIs and two runs.

As good as Stillwater looked for that one inning against Washington, the struggles through the other six innings were the epitome of what went wrong in the regional opener against Sand Springs.

Stillwater didn’t record its first hit until the sixth inning, compared to the 13 the Sandites tallied at the same juncture.

“Their pitcher was good,” Stokes said. “You have to give her credit, but we also struggled just hitting where she was pitching.”

Sand Springs sent eight batters to the plate in each of the first two innings, jumping out to an early 4-0 lead.

Stillwater threatened to answer in the third when Stokes reached on an error and made it to third, but the Lady Pioneers struggled to come up with the timely hit to bring her in.

After Sand Springs tacked on a run in the fourth on Haley Andrews’ solo home run, the Sandites put the final nail in Stillwater’s coffin with a three-run sixth — capped off by a two-run blast by reserve Cody Cheatham.

While the loss may put the Lady Pioneers in a must-win situation heading into Friday’s noon game at Owasso, Davis said she still feels confident knowing that her team needs to win three straight to make it to state.

“We just have to come and hit the ball,” Davis said. “It’s go big or go home. I feel that we can beat both of them. We just have to make sure we score some runs.”