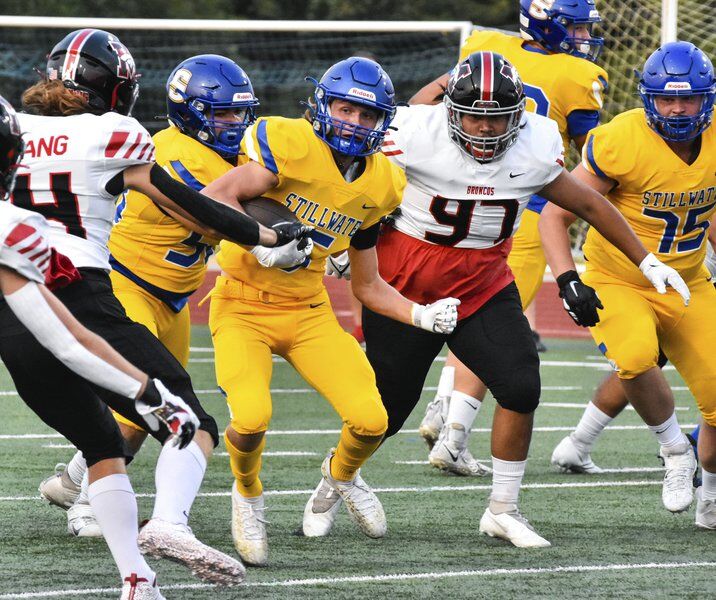 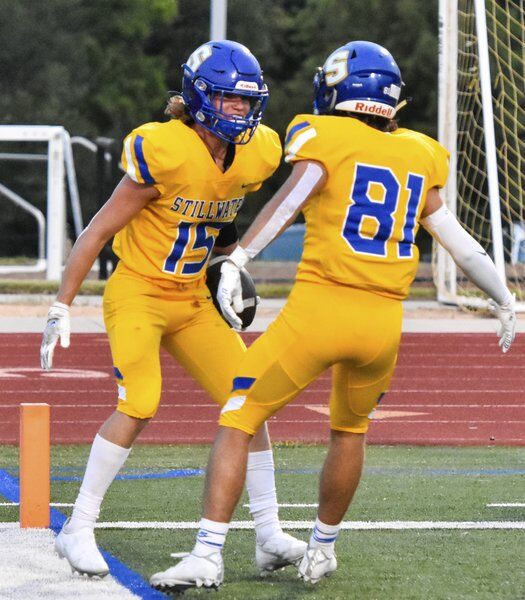 Lisa Thompson typically hears a blend of encouraging compliments and competitive jabs when her twin sons talk about football practice.

Sometimes, Holden and Heston Thompson offer praises for each other, making sure to tell their mom when one brother had an especially impressive day on the field.

As siblings and teammates at Stillwater High, they also share a lifelong rivalry, and it shows. If Holden scores a touchdown, Heston has motivation to outdo his twin with two. If Heston misses a tackle in practice, Holden says he would have done better.

“They’re brothers, and they love each other,” Lisa said. “But they are competitive with each other.”

Even when the competition escalates into bickering, Holden and Heston are supportive siblings. That statement might seem paradoxical on the surface, but they have a well-intended purpose for critiquing each other.

It’s motivation to succeed, to keep working on technique in practice and bring the best versions of themselves to the field on Friday nights. Now that they are key contributors to the varsity squad as sophomores, this competitive fire can help them hold their own not only with each other, but also with fierce opponents as district play approaches.

Through three non-district games, each twin has settled into a unique role for the Pioneers. Heston primarily plays wide receiver, while Holden gets most of his reps at running back. Holden dons a No. 5 jersey, and Heston wears No. 15.

Their personalities are distinct, too, though Holden said they both have outgoing dispositions. Barry Thompson, their dad, said he shares Holden’s structured, somewhat intense nature, while Heston is more laid-back like Lisa.

“They’re just different, but they complement each other well,” Barry said. “They’re very fortunate to have each other that can help push one another.”

It happens regardless of the sport they’re playing.

In Little League baseball, Heston caught while Holden pitched, but the distance from the mound to home plate couldn’t keep them from squabbling. Lisa laughed as she remembered a time when they simultaneously carried on an argument and managed to throw an opposing batter out at first base.

As they grew older and started focusing on football, they took their quarrels to the weight room, but their competitiveness doesn’t detract from their shared mission. Holden and Heston are team players, and coach Tucker Barnard said he knows they would both be willing to shift to a number of spots on the field if it helps the Pioneers win.

In an offensive unit with only three returning starters, Holden and Heston have quickly become mainstays at their positions.

Although Barry said he doesn’t want to brag about his sons because he strives for them to be humble, their athleticism shows why the Pioneers value them, whether Heston is catching a deep pass from quarterback Gage Gundy or Holden is speeding ahead for a first down.

Of course, there’s still a learning curve from junior varsity to varsity play, and the twins are adapting to that.

“As they’ve come through school, they’ve been kind of the focal point in their class,” Barnard said. “They’re the guys getting the balls and scoring the most touchdowns and making all the tackles and stuff like that. Where it’s a little different out here is just when you add them in with the other classes ahead of them, just finding their way is maybe a little bit of a challenge, just to try to find their identity on this team.

“We’re trying to work with them on the details. They’re both incredible athletes.”

Holden has accepted the large task of filling in at the position that previously featured Qwontrel Walker, a standout rusher who shattered Class 6A-II records. Without Walker, Holden is dedicated to the challenge, often splitting carries with junior Noah Roberts.

“It’s a very hard thing to compete with Qwontrel, but I’m doing my best I can and trying the best I can,” Holden said. “And with Noah’s help, I think we can really help the team out this year.”

Heston has proven he can do the same as a receiver. He and Gundy recently wowed a home crowd with a 60-yard passing touchdown on fourth down, sealing a close victory against Mustang. Holden called it “an amazing moment,” showing just as much enthusiasm as Heston when he reflected on the play.

During the past Friday, the Pioneers couldn’t match their thrilling Week 2 performance, falling to heavyweight program Bixby on the road, but the twins propped the offense up during an otherwise tough defeat. Heston grabbed a pass from Gundy to put Stillwater on the board with a 71-yard touchdown, and Holden reached the end zone on a 61-yard rush in the second half.

This week, they’re preparing to open district play with a matchup against Deer-Creek Edmond at 7 p.m. Friday on the road. At practice, the twins are maintaining their rivalry, but their unbreakable friendship is also evident, encapsulated in the grins on their faces when they talk about playing football alongside each other.

They’re lifelong teammates, and Heston said they usually make every decision together. Recently, they consulted each other before choosing to switch from baseball to track in the spring, though they will still be available for pitching.

Yes, they can agree. And when they’re on the same page about channeling their energy into Pioneer football, it boosts the whole team.

“We definitely drive each other,” Heston said. “We might have a lot of fights, but it drives us and makes us better athletes, and at the end of the day, I can count on him to do the right thing on the field.”