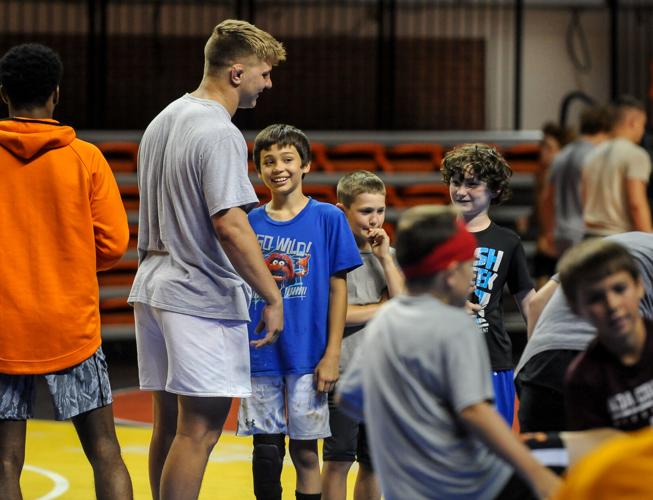 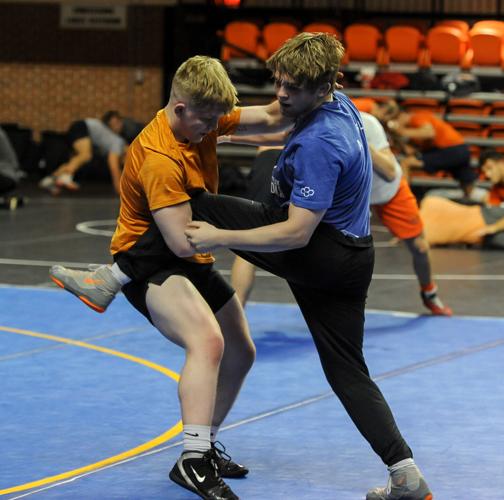 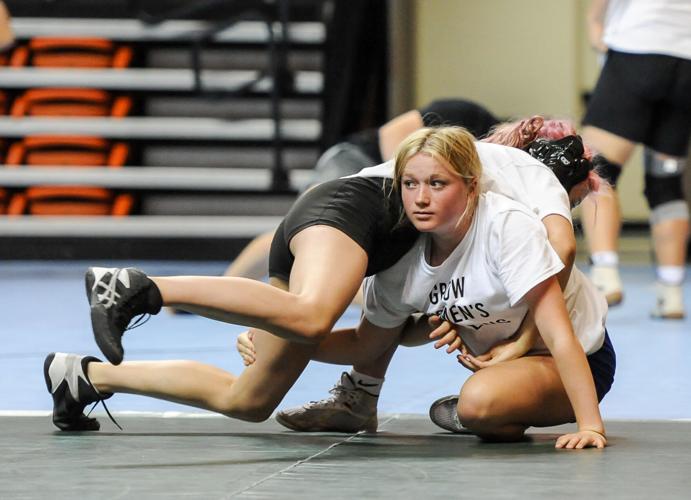 Mingled among the nearly 400 wrestlers – both boys and girls from high school down to elementary – are children of former teammates while wrestling at Oklahoma State 20 years ago.

“It makes me feel old,” Esposito joked. “Two of my college teammates’ kids are here – Shane Roller’s son and Jake Rosholt’s son. But then you have Coach (John) Smith’s sons and Hardell Moore’s sons. Before long, we’ll have Chris Perry’s son and one of Tyler Caldwell’s kids out here.

“The generations just keep going on and on and on. I’m just glad that they’re happy and they want to do it and possibly follow their parents’ footsteps.”

The camp was also filled with sibling wrestlers. Siblings of current Cowboy coaches and wrestlers were on hand for the first day of the weeklong camps the feature a technique camp mostly for younger campers and an intensive training camp largely filled with high school athletes that will run 10 days.

Caldwell was center stage showcasing drills for the young campers, and one of the Cowboy wrestlers he was using to highlight the move was his brother – Kyle Haas, an incoming freshman for Oklahoma State.

While Levi Smith, the youngest son of the head man of the program, was among the technique camp participants, his older brother Sam – who will be a senior at Stillwater High – was working alongside the intensive camp.

Sam wasn’t the only Pioneer getting some summer workouts in alongside Cowboy wrestlers.

Angelo Ferrari, the younger brother of 2021 national champion A.J. Ferrari, was scrapping with teammate Landyn Sommer, while LaDarion Lockett – who recently won a state champion as a freshman and is the son of Cowboy Wrestling Club coach Jasper Lockett – was training with former Pioneer and NCAA qualifier Carter Young.

Perhaps the most intriguing image of siblings at the camp came on the edge of one of the eight mats covering the entirety of the floor inside GIA.

Kael Voinovich, a state champion for Stillwater High last year, was working with his older brother Victor, who was a freshman at Oklahoma State.

At the other end of the mats from them, training side by side – but not against each other – were brothers Wyatt Sheets, who is taking advantage of his extra year of eligibility, and Cutter Sheets, who will be a freshman for the Cowboys this upcoming season.

Though there were plenty of familiar faces for many of the Cowboy wrestlers throughout the two camps, there was also plenty of young, new faces constantly looking to the college-aged athletes looking for advice and approval. It’s one of the aspects to the camp most of the Cowboys enjoy most.

“You never know, some of these kids are gonna wrestle here (at Oklahoma State), you just never know who it is going to be,” said Luke Surber, who was an NCAA qualifier at heavyweight last season. “So you just want to try to help them get as much better as they can and make sure to have fun.”

While there was generations of male wrestlers inside the historic wrestling venue, the hope is another lineage of generational wrestlers are beginning.

The growth of wrestling for females has been widespread across the country, including the first Division I program being announced by the University of Iowa that was coupled with the increase in state high school associations sanctioning girls wrestling – which includes Oklahoma that held its first official girls’ state tournament this past year.

While the Cowboy camp has had its fair share of female wrestlers participating over the years, there seemed to be a spike with this camp in terms of a younger group. Previous years it was predominantly young teenagers – either in high school or nearing high school – while this camp appeared to have several still in elementary. John Smith also remarked that they had several females this year also in the intensive camp.