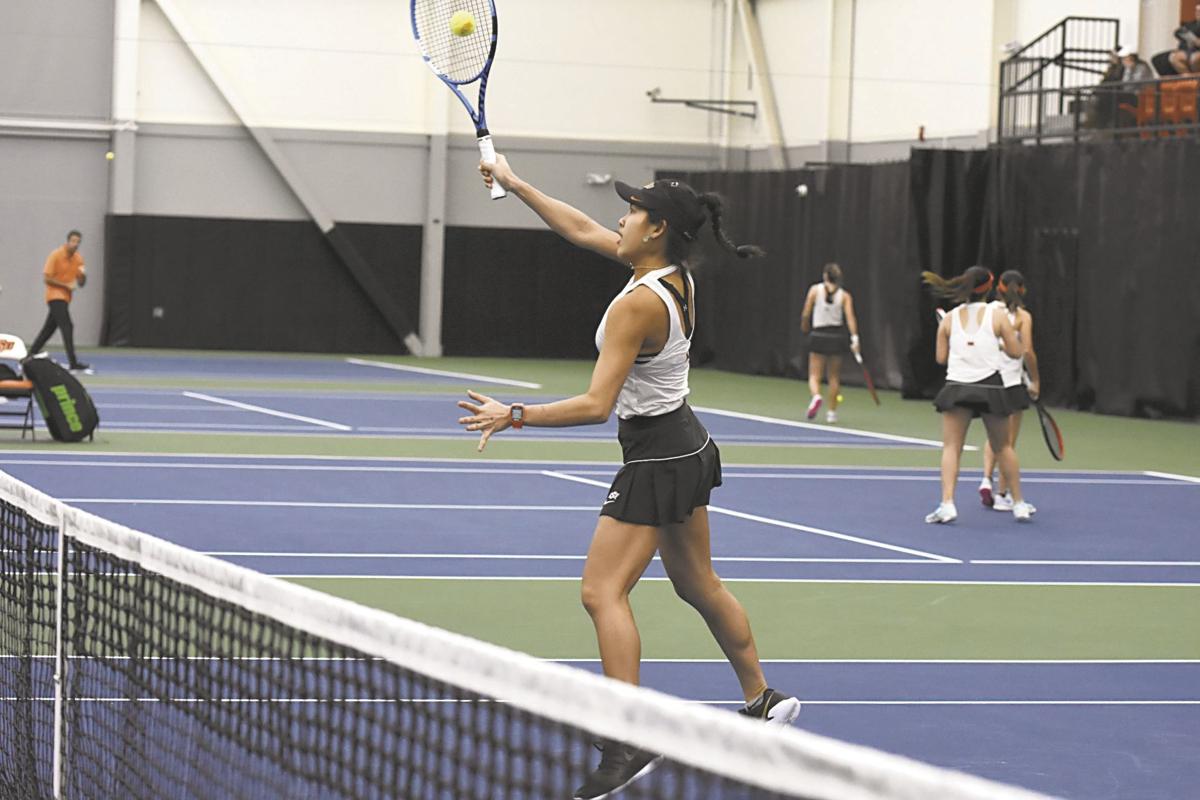 Oklahoma State sophomore Bunyawi Thamchaiwat spikes a ball at the net during the No. 2 doubles match against Wichita State on Saturday night at the Michael and Anne Greenwood Tennis Center. The Cowgirls beat Wichita State 4-0 in the nightcap. 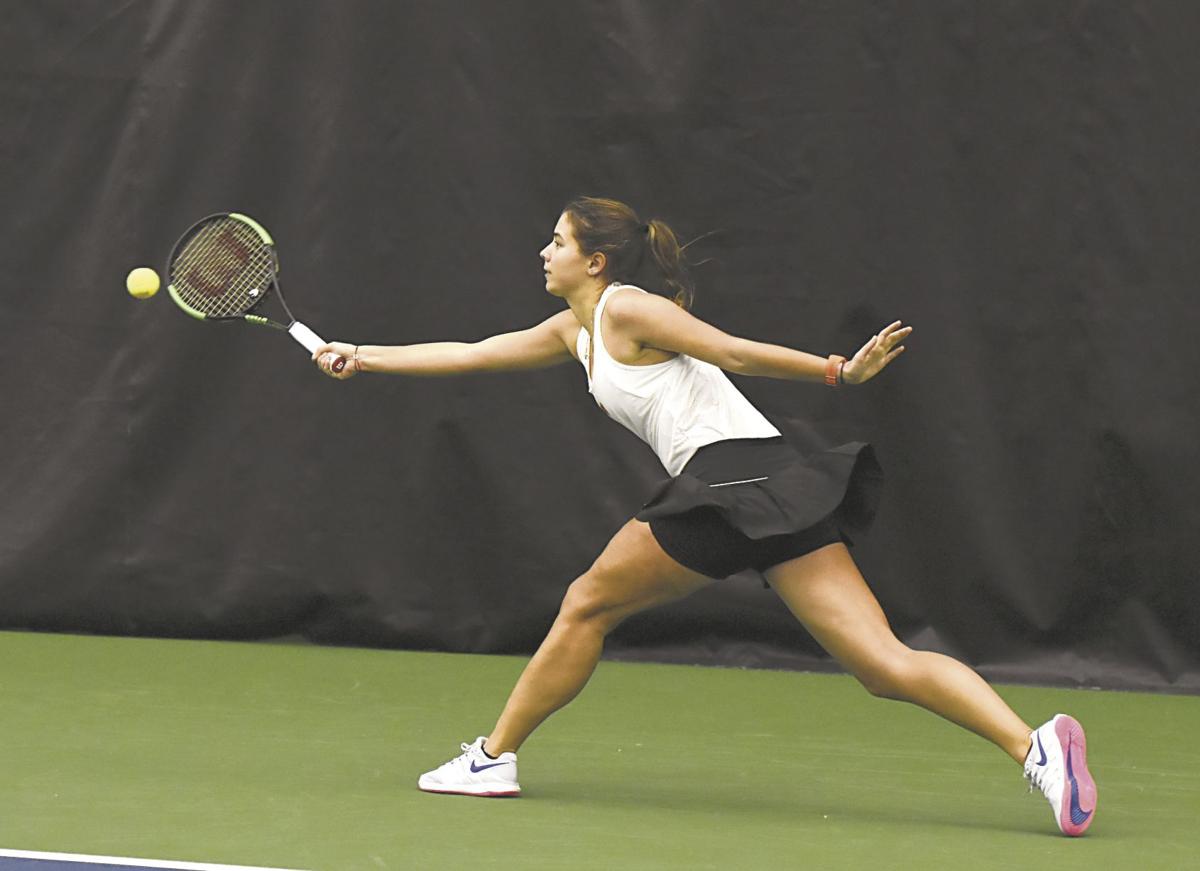 Oklahoma State freshman Lenka Stara stretches to return a forehand volley during the No. 2 doubles match against Wichita State on Saturday night at the Michael and Anne Greenwood Tennis Center. 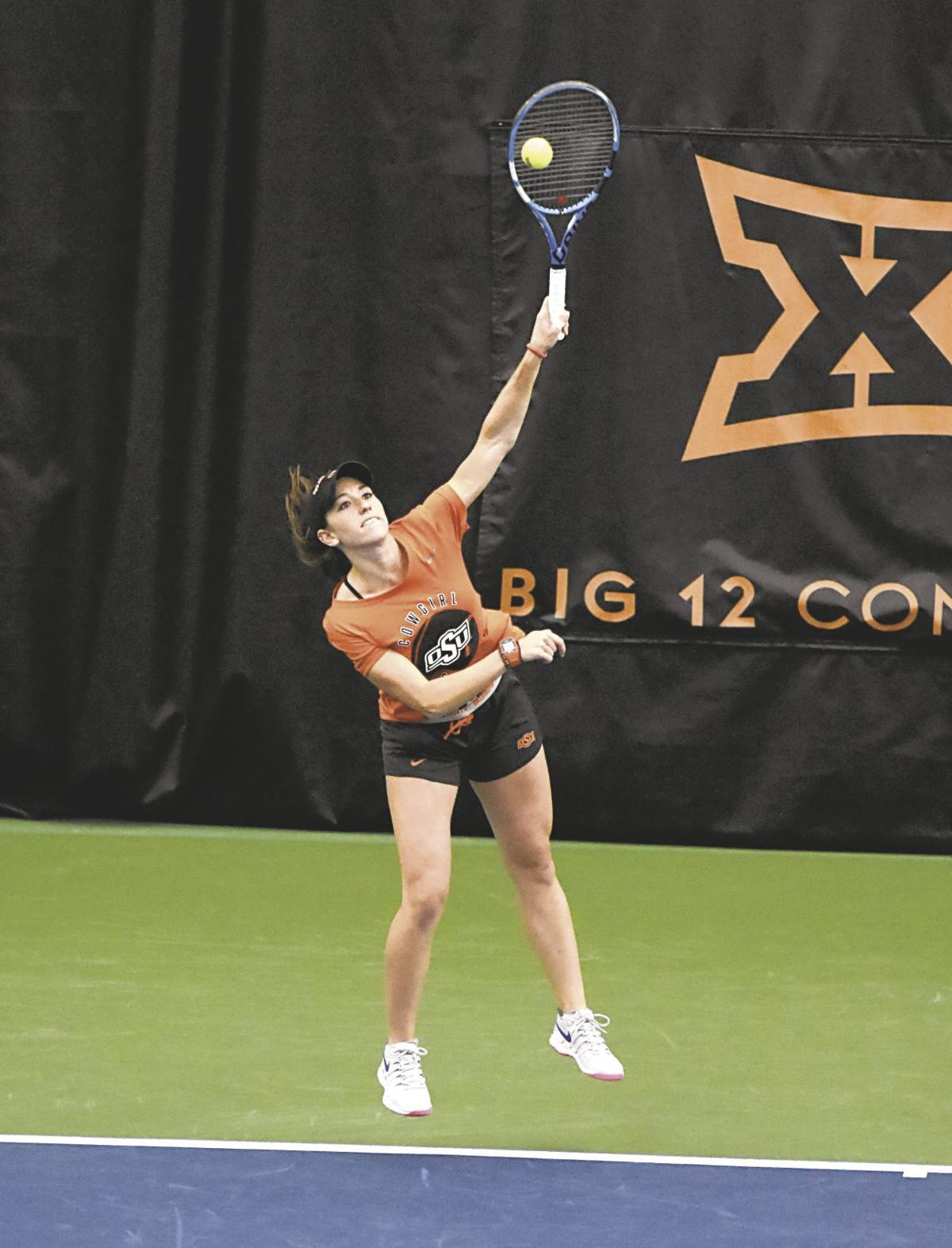 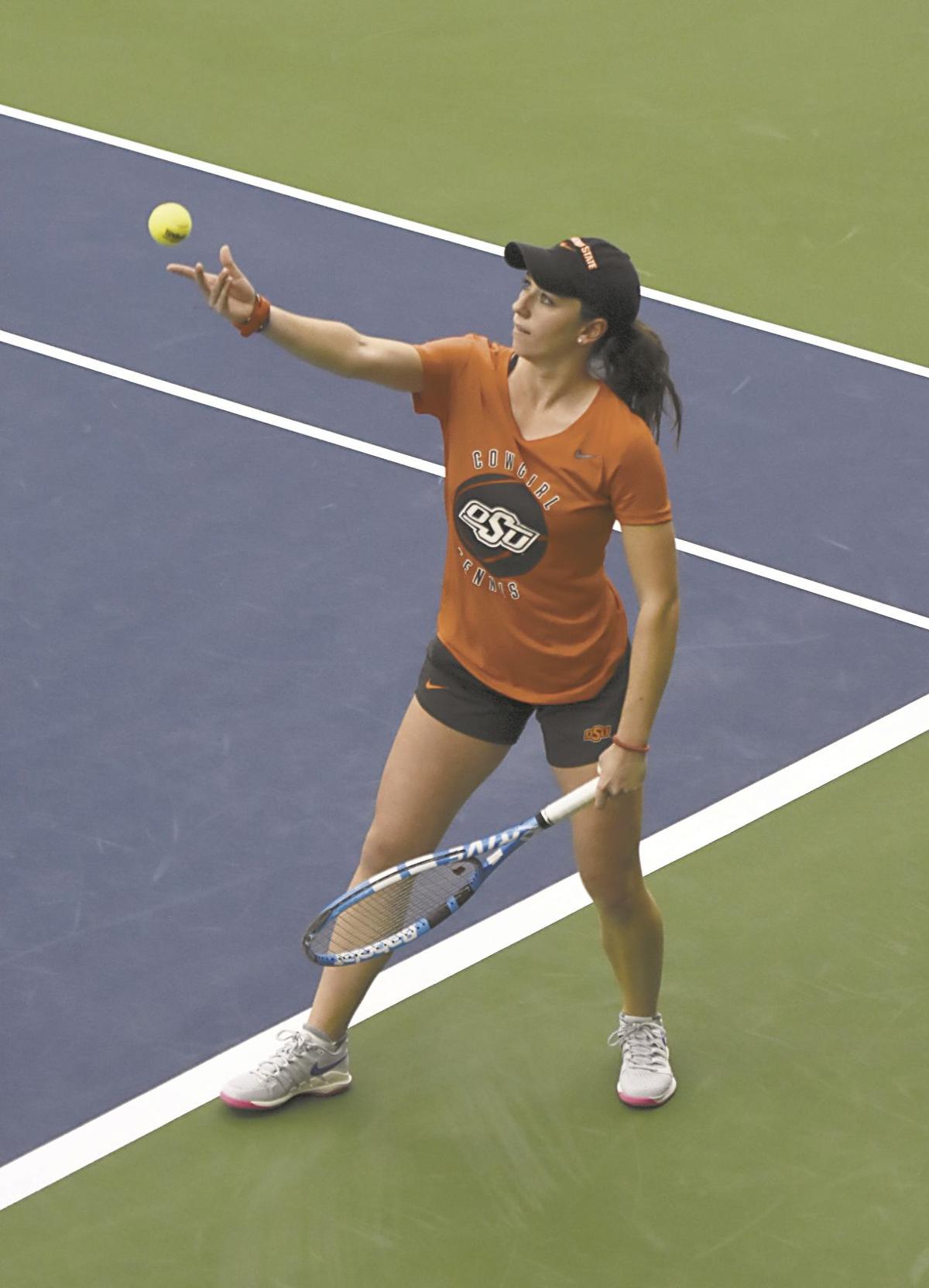 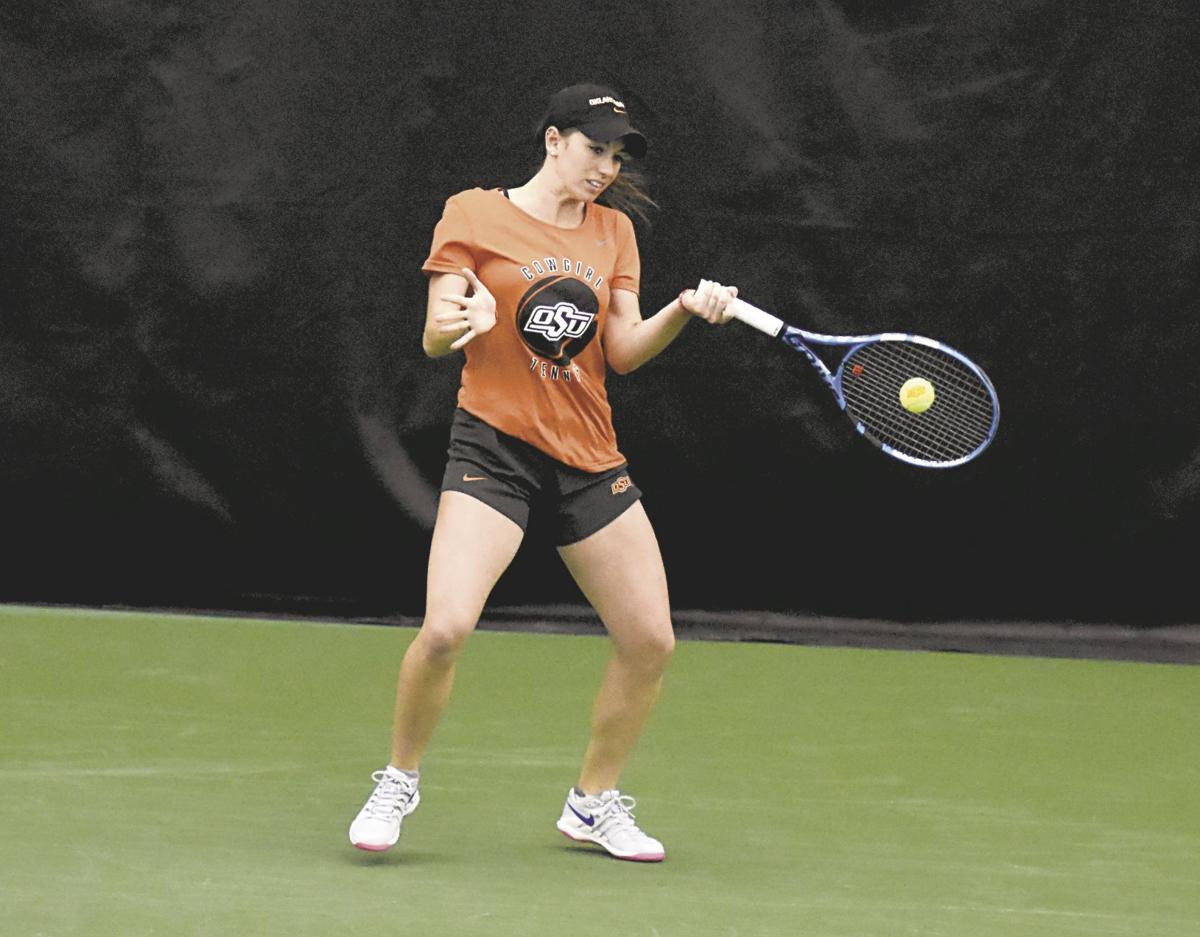 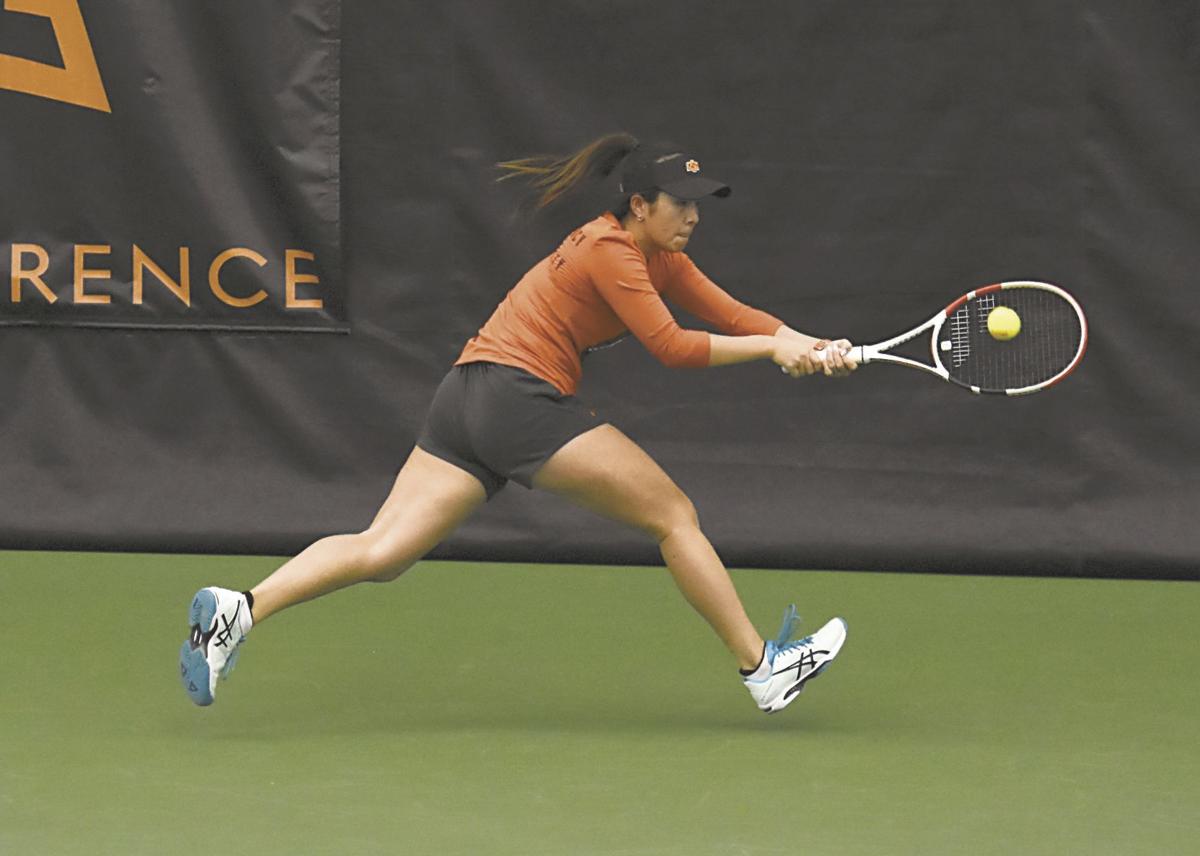 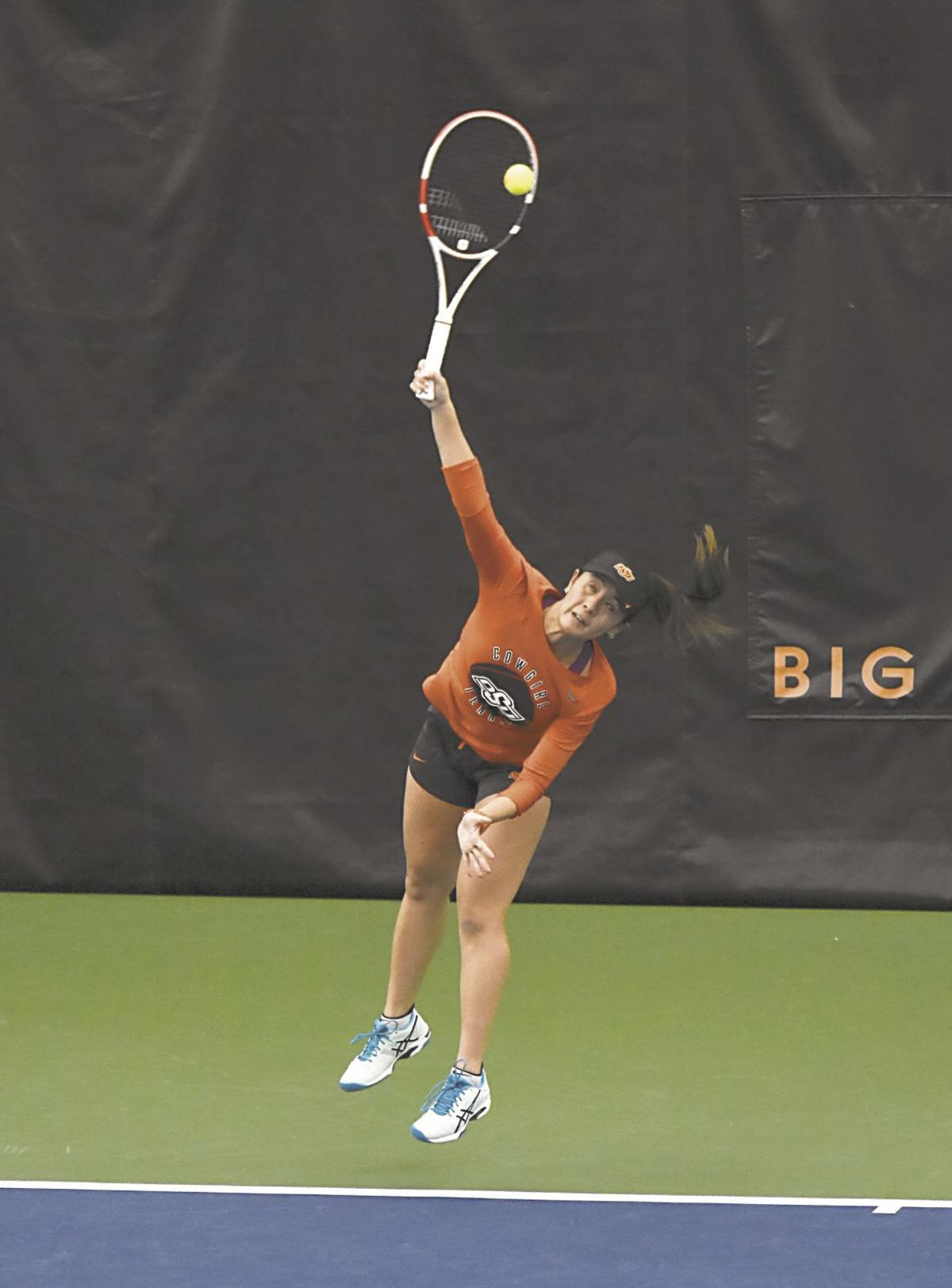 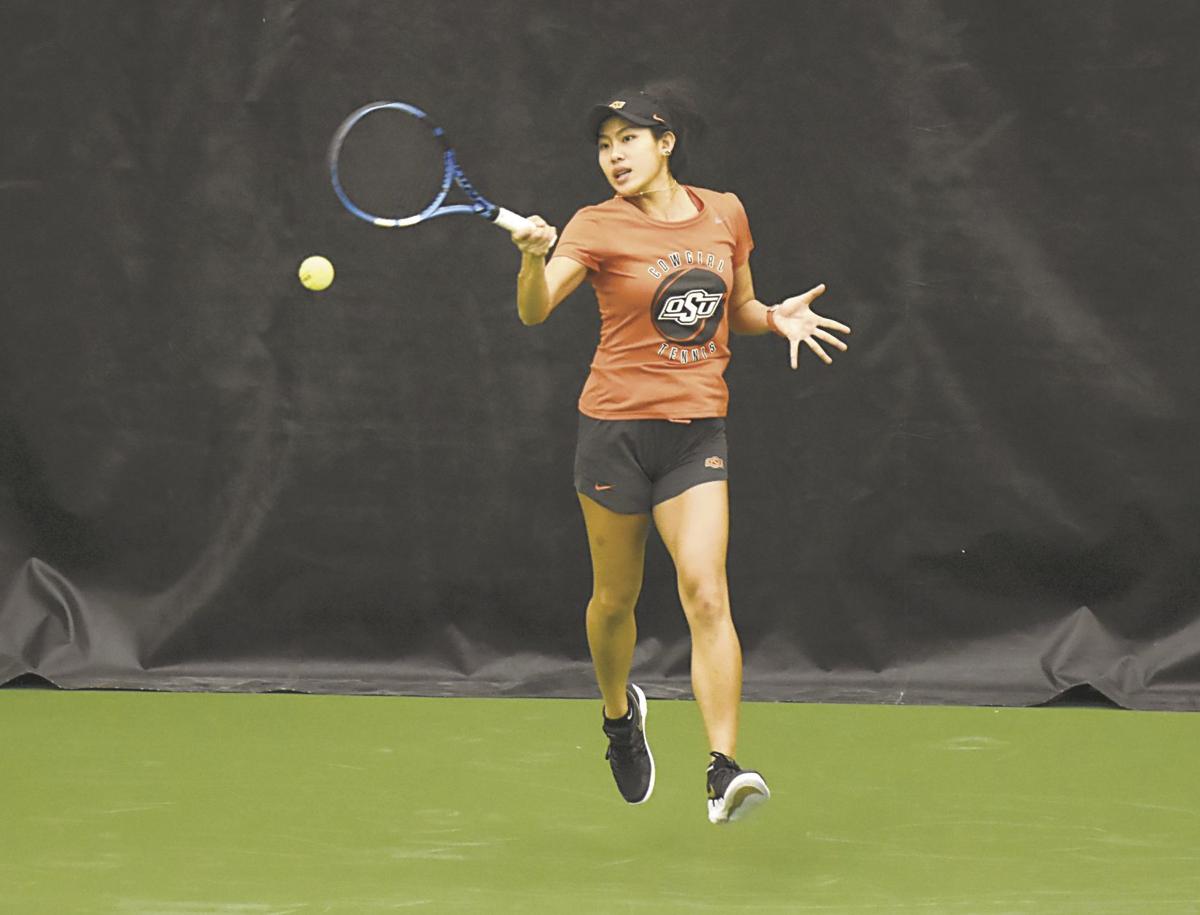 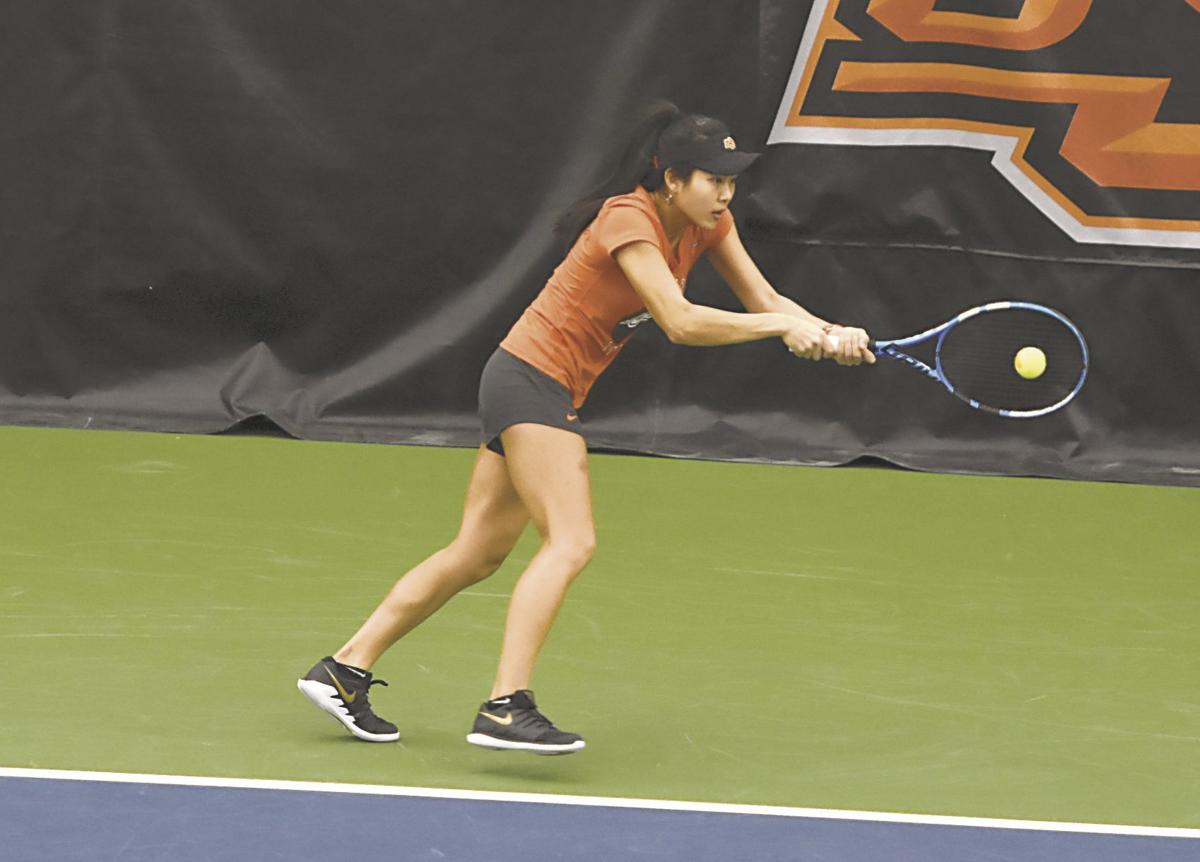 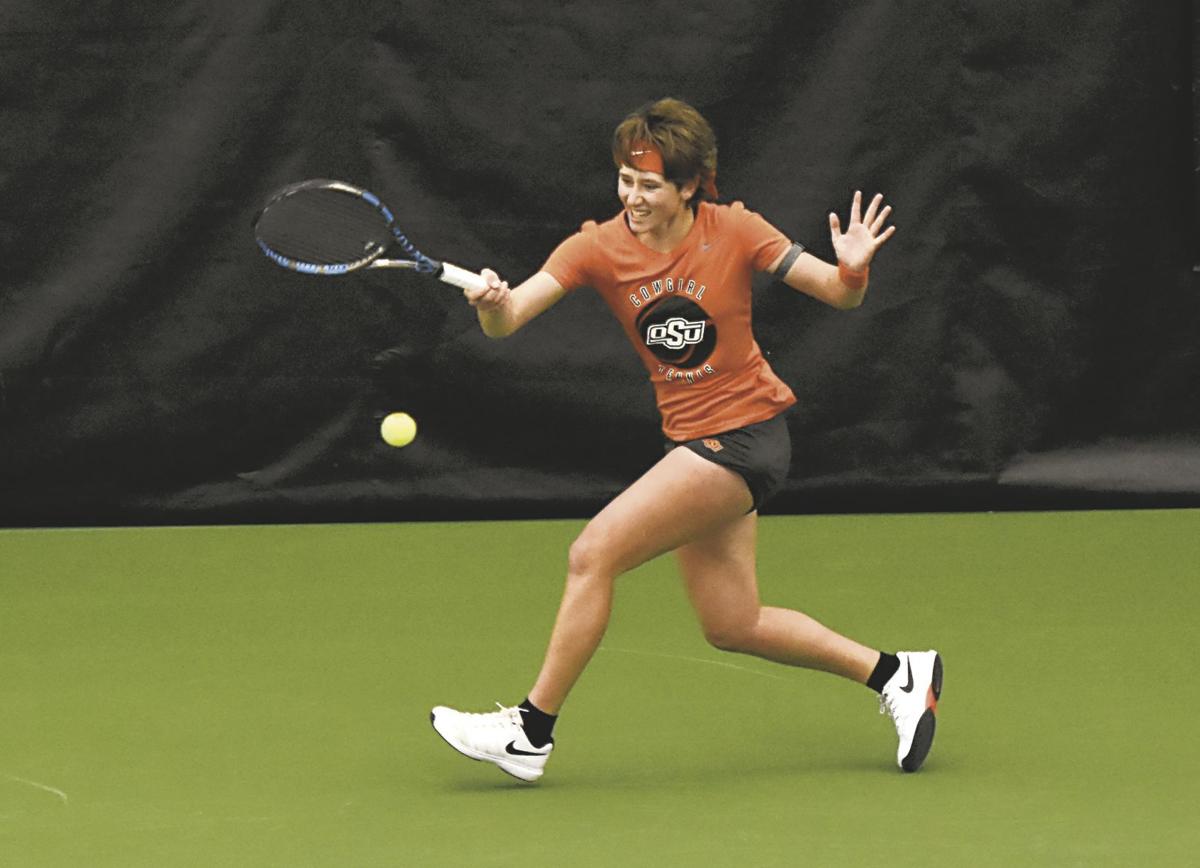 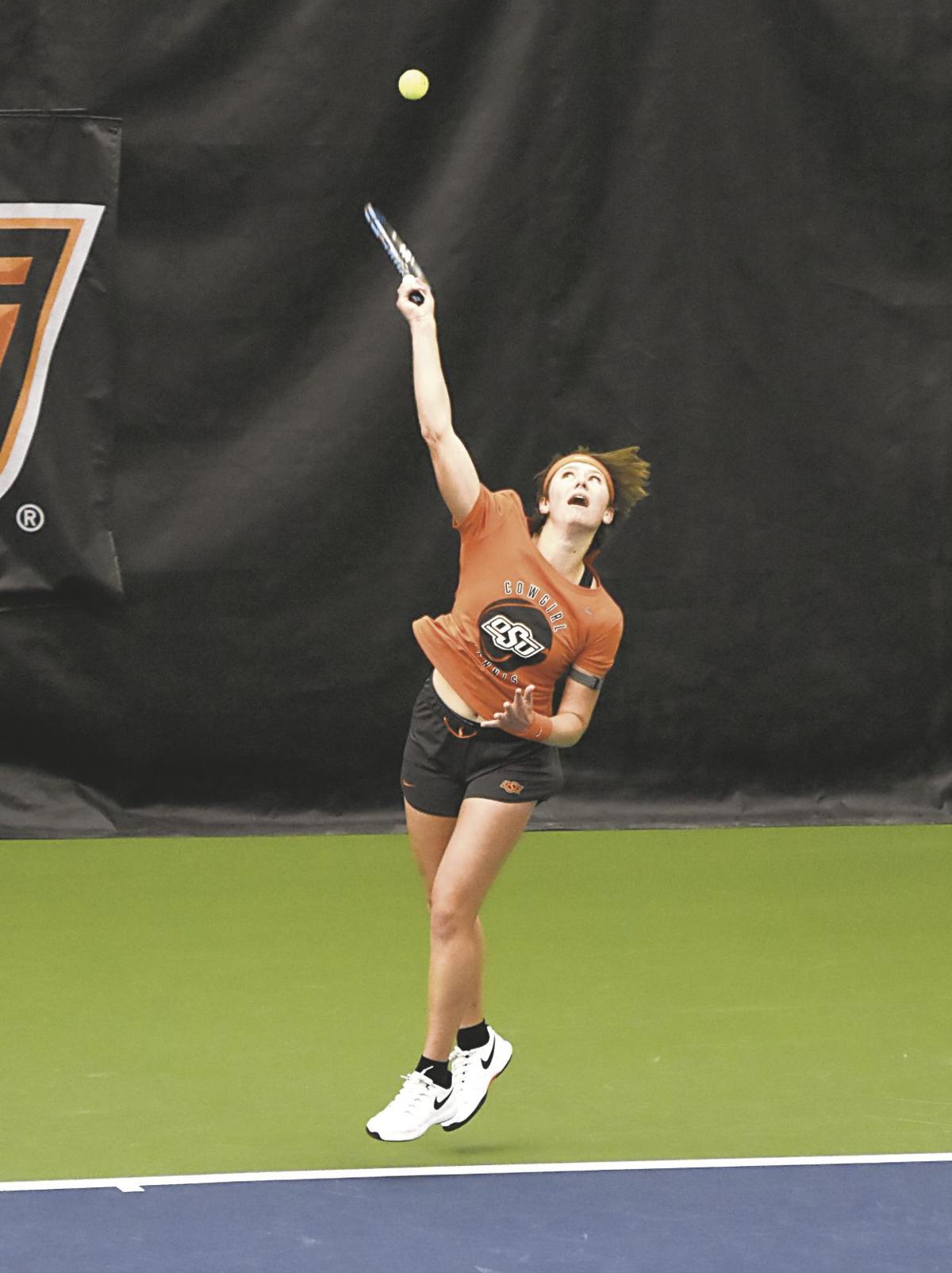 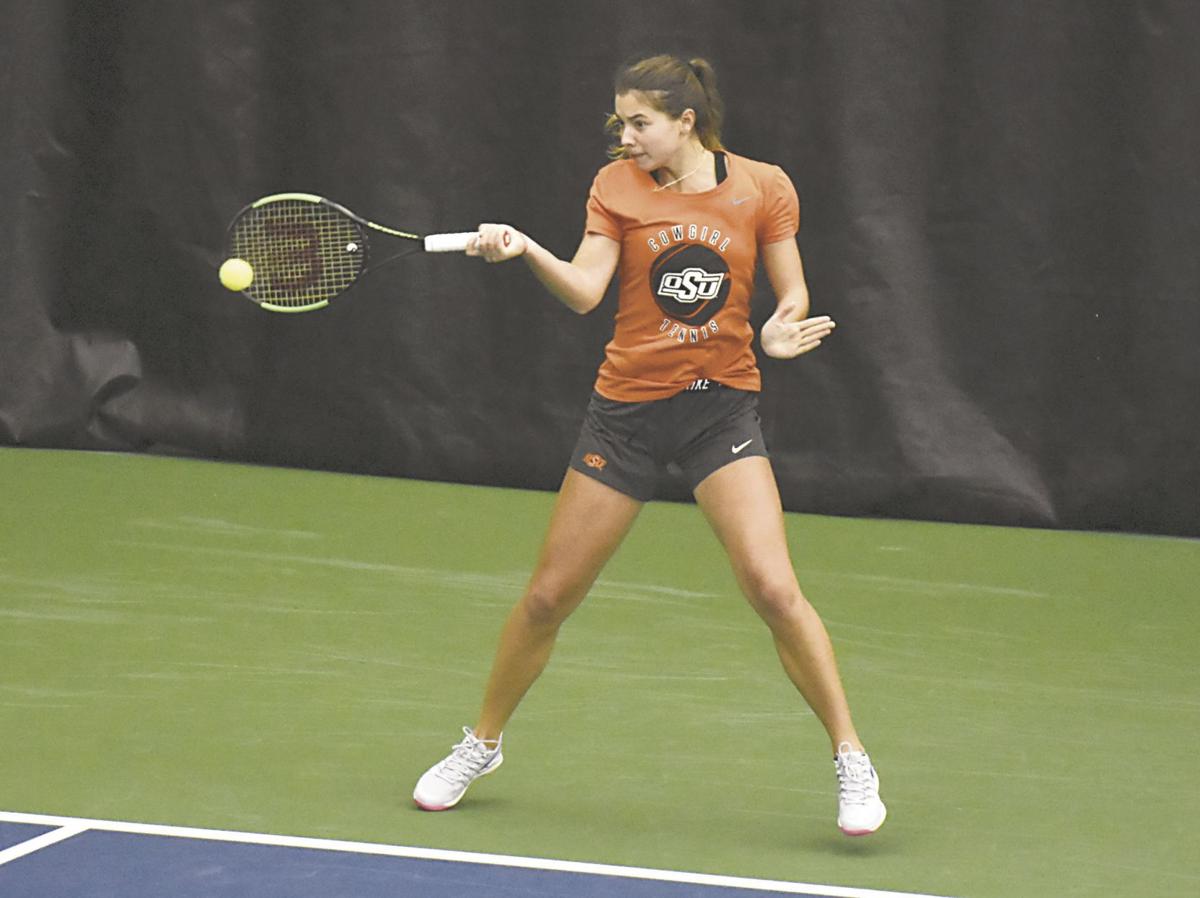 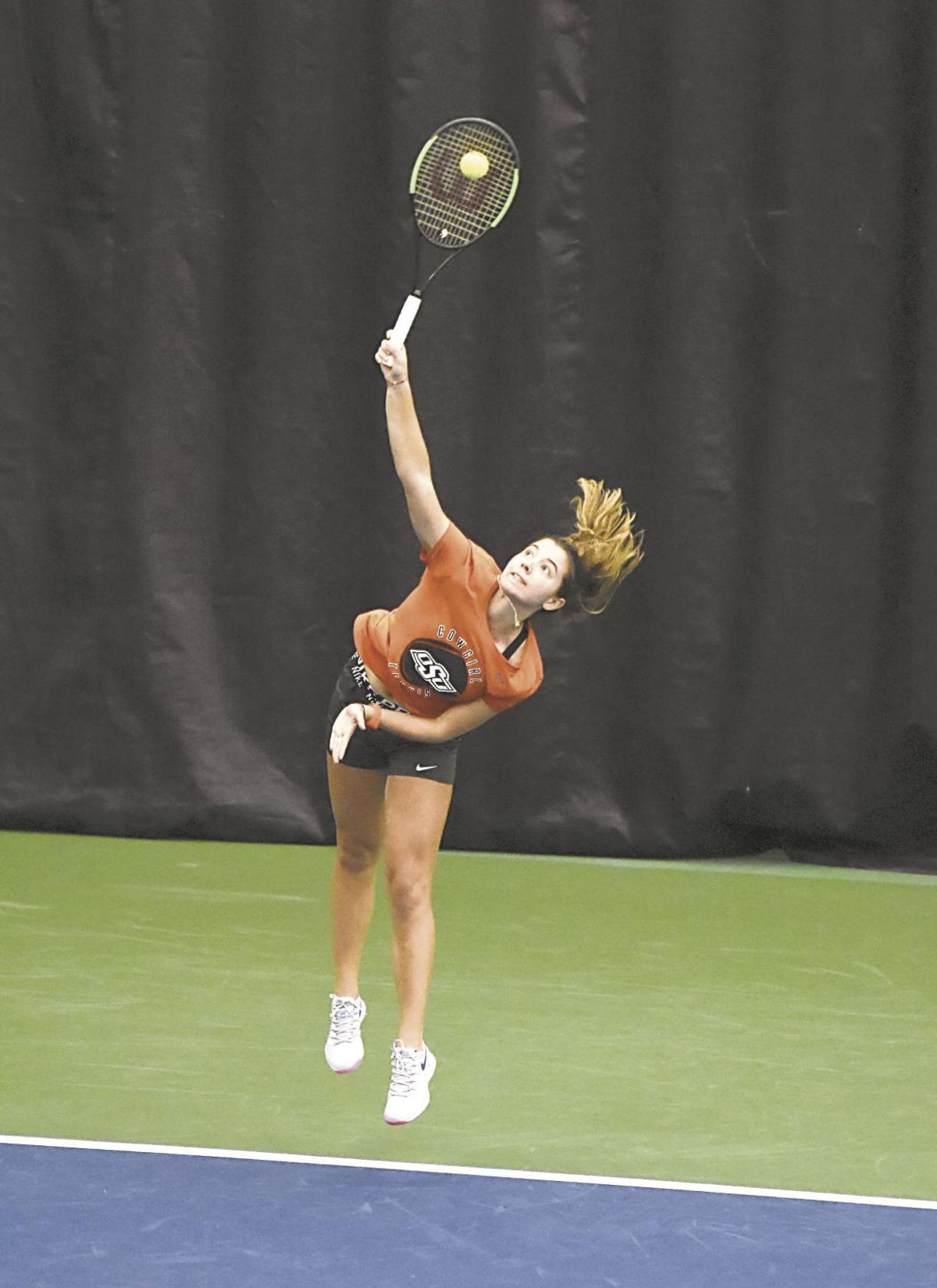 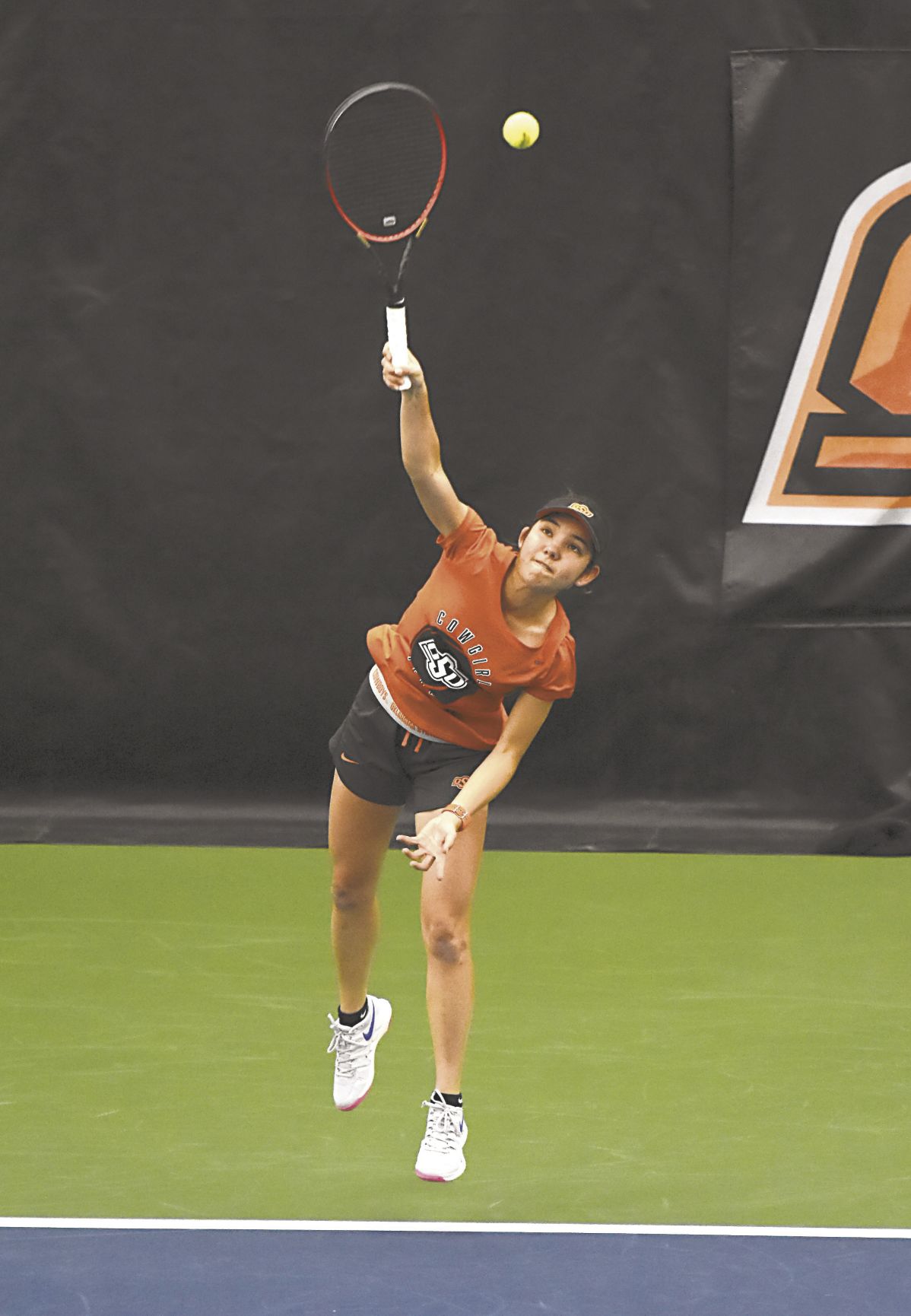 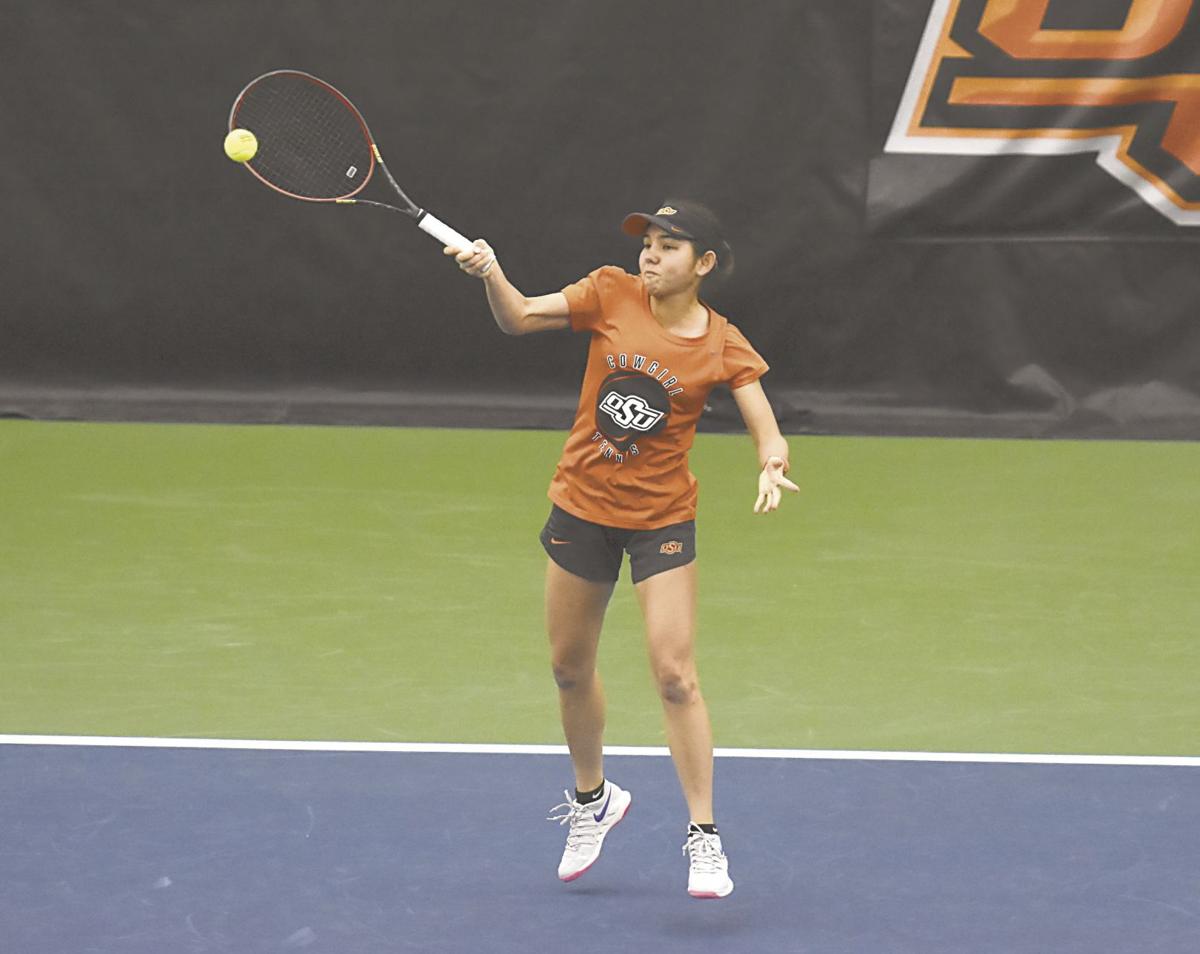 Oklahoma State sophomore Bunyawi Thamchaiwat spikes a ball at the net during the No. 2 doubles match against Wichita State on Saturday night at the Michael and Anne Greenwood Tennis Center. The Cowgirls beat Wichita State 4-0 in the nightcap.

Oklahoma State freshman Lenka Stara stretches to return a forehand volley during the No. 2 doubles match against Wichita State on Saturday night at the Michael and Anne Greenwood Tennis Center.

Lenka Stara has been in Stillwater for only a matter of days, but she wasted no time in making her presence known on the Oklahoma State women’s tennis team.

The freshman from Slovakia joined the Cowgirls after the first semester, so her first-ever collegiate match was Saturday morning. In the No. 6 singles spot, Stara helped the Cowgirls sweep all seven points against Abilene Christian in their first match of the calendar year.

In the nightcap, Stara again won in straight sets, helping the Cowgirls defeat Wichita State and begin the season with a pair of home victories.

“I thought the girls had a really good week of practice,” Cowgirl coach Chris Young said after the morning win. “We came back in good shape, but we really pushed the girls hard this week and I think it really showed. The girls were ready and came out strong right away, and didn’t lose too many games and played really clean tennis. I would say for the first match of the season, that’s about as good as it gets. We know it’s going to get tougher tonight with Wichita State and we’re going to expect a really good battle there.”

Young added the Shockers were a good test, and that’s why he wanted to play them after having played an match earlier Saturday. He also joked about himself having coached the Shockers before coming to OSU.

“Wichita State is always good opponent for us,” Young said. “It’s a regional rival for us. They’ve been a team that’s won a lot of matches. They had a guy a few years ago that started a pretty good run for them, so they’ve always wanted to beat that guy. … We always know we’re going to get a tough match, and that’s what we wanted today. That’s why we wanted to play them second.”

The Cowgirls dropped only 16 games during the nine matches. Seven of those came in the straight-set win by freshman Alana Wolfberg.

The Orlando, Florida, native saw her big 5-1 lead in the first set disappear to a 5-5 tie. Wolfberg composed herself and won the final two games of the set, taking it 7-5.

She cruised to a 6-2 victory in the second set with all of her teammates looking on from the adjacent court. Her match was the final one against ACU. Wolfberg’s win was a good teaching moment for Young.

“I think we were kind of rolling and Alana was up 5-1, and the other girl kind of changed her strategy and did some things Alana needs to work on,” Young said. “I told her, ‘This is great for you. This is great this girl is changing her game plan, going to slicing and dicing and mixing it up,’ because a lot of girls are going to know they can’t sit back behind the baseline and grind with Alana. They’re going to have to challenge her and do some different things.

“That’s what you want early in the season – somebody to put you to the test. Once it got to 5-all, she won the next two games to close out the set, she kind of rolled in the second set. I think she learned a lot through this match, and I think that’s going to pay big dividends for her. She probably got the most out of this match, and for a freshman, that’s what you want.”

The other five Cowgirls dominated their singles matches – all winning in straight sets. Freshman Ayumi Miyamoto didn’t surrender a set in her No. 3 singles match. Junior Lisa Marie Rioux, Sophomore Bunyawi Thamchaiwat and sophomore Catherine Gulihur gave up only a single game in their respective matches.

With the team victory already clinched – 4-0 OSU – Stara and ACU’s Eva Du Toit finished their match. Stara cruised to a 6-1 win before taking the second set 6-3 to win her first match as a Cowgirl.

“It was so nice,” Stara said. “First, doubles were really good. My singles match was hard for me emotionally, but the second set was fast and good.”

Young was happy for Stara, because he knows she hasn’t had much time to get acclimated to Stillwater and OSU.

“It’s hard for a freshman to come in right away in the first week,” Young said. “She did a really good job. Lenka is such a talented girl. I think she’s going to have a really special career here. It’s nice for her to get off to a good start. With that serve that she has and her ball striking from the baseline, I think she’s going to be in every match.”

The entire experience Saturday was a first for Stara. It was a good first day of competition.

“It was new, because we don’t have this in Europe,” Stara said. “We don’t play team matches at all, so it was nice. The first match was so cool and the girls and team are so supportive.”

OSU jumped out to a quick, 1-0 team lead over ACU with the doubles matches. The No. 1 team of Rioux and Miyamoto blanked their opponents, as did freshmen Dariya Detkovskaya and Wolfberg at the No. 3 spot.

Thamchaiwat and Stara led 4-2 when the doubles point was clinched. Young switched some of his doubles team Saturday from the teams he put together in the fall, but he was happy with the results.

“These pairings we had today give us a chance to really be deep in doubles,” Young said. “Dariya moving to help Alana really makes a big difference. Dariya is really strong at the net, and for her being at No. 3 doubles, I think she’s going to add some stability there. Lenka, with her big ball-striking ability, her and B (Thamchaiwat) are a good combination, so I thought we might as well try it.

“We knew what Dariya and B had in the fall, but Lisa and Ayumi are just playing solid in singles and doubles. They’re not beating themselves and they’re playing solid – we saw that all week in practice and they carried it forward into today.”

The doubles teams were also dominant against WSU. Detkovskaya and Wolfberg won 6-1 before the other teams raced to finish first. Thamchaiwat and Stara edged out the No. 1 doubles with their 6-2 win.

Miyamoto and Rioux led 5-2 and 40-15 in what could have been the final point when the No. 2 doubles team clinched the point for OSU.

The Cowgirls were challenged a bit in the singles matches, but all six players won their first sets. Wolfberg was the first to claim victory, winning her No. 4 singles match 6-1, 6-1.

“I really like her response in doubles,” Young said of Wolfberg. “She came out and she was a good leader for us there. In singles, she really took some of the things she learned today in the first match and improved. She’s somebody that I think is going to continue to get better and better. She’s a great competitor. She just has to learn to trust herself a bit in certain situations.”

“I’m really proud of the way the girls executed today, their attitudes and competitive spirit,” Young said. “It’s a long day and it’s going to be another long day tomorrow, but I think the girls’ attitudes and the way they’re competing and staying on task is really important. That’s what this weekend is going to do – it’s going to challenge us mentally more than anything.”

Young was also quite happy with the attendance Saturday, especially in the morning.

“I really want to say thanks to our fans,” Young said. “Everybody wakes up and surprise, we’ve got snow, but our fans are loyal and true. People drove from Tulsa and Oklahoma City, and then obviously the crew we have from Stillwater on a regular basis.

"There aren’t many college tennis programs in the country that 10 a.m. on a Saturday where we get unexpected snow that we’d have the stands almost full. I’m thankful to our fans. That’s the reason Cowgirl tennis is special.”

The Cowgirls play two more home matches Sunday. They will host Central Arkansas at 2 p.m. and Oral Roberts at 6 p.m.