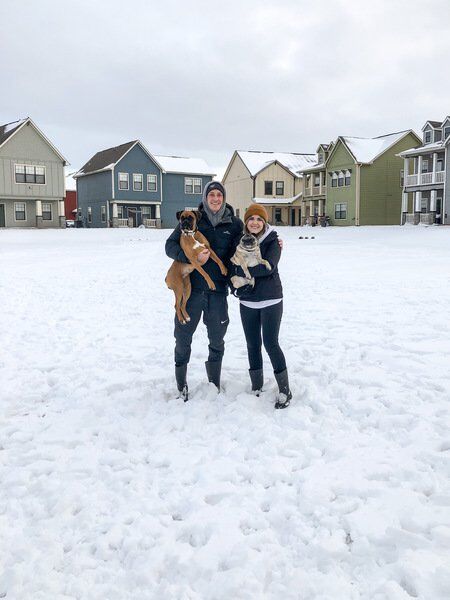 Provided by Kelsey Hutton Tom and Kelsey Hutton spend time in the snow with their two dogs, Nova (left) and Lucy. The Huttons said it has been difficult to be so far from their loved ones in Australia during the pandemic, but they have relied on each other for constant support. 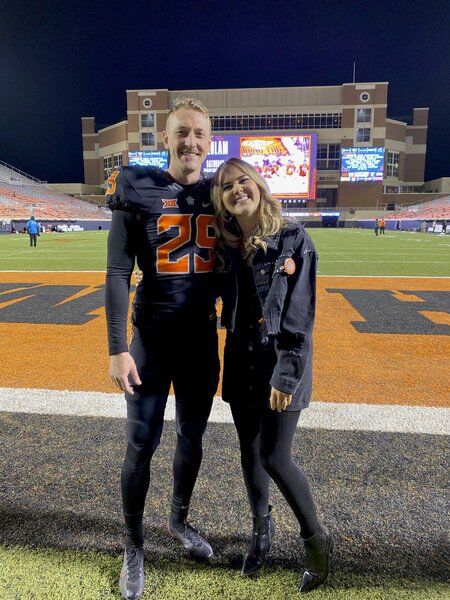 Provided by Kelsey Hutton Tom and Kelsey Hutton spend time in the snow with their two dogs, Nova (left) and Lucy. The Huttons said it has been difficult to be so far from their loved ones in Australia during the pandemic, but they have relied on each other for constant support.

Tom Hutton needed to sleep after a long shift at the paper mill.

As a young adult living in Australia, before he had any reason to care about a random university in north-central Oklahoma, Hutton stuck to a rigorous work schedule: two 12-hour days and two 12-hour nights each week. At the end of a nocturnal shift, he was finally taking some time to snooze.

Then the phone rang.

Hutton snapped out of his groggy state and talked to a representative of Prokick Australia, the organization that was connecting him and numerous other Australian athletes with opportunities to play American football.

Coaches at Oklahoma State were interested in extending a scholarship to Hutton.

Before answering another call to speak with Steve Hauser, the then-graduate assistant who coordinated special teams for the Cowboys, Hutton had 20 minutes to conduct a Google search of OSU.

How much did Hutton know about his soon-to-be home?

It took gumption for Hutton and his wife, Kelsey, to uproot their lives and start over in Oklahoma. They had been to the United States for a trip to Hawaii but never set foot on the mainland until the campus visit that happened a few months after Hutton’s call with Hauser. At 28, Hutton was already more than five years older than many college seniors.

This was no ordinary scenario, but Tom and Kelsey, who got married about a year before moving to Stillwater, didn’t have to spend time deliberating or fretting. They put their trust in the Google search.

“I think we just kind of were in agreement that if this was something that he was seriously considering, I don’t think that we ever had a conversation that not doing it was a question,” Kelsey said. “We were at the stage where we were like, ‘Life’s too short. We may as well try something different, live overseas and make the most of it while we can, while we have an opportunity.’

That gargantuan leap led Hutton to where he is now, preparing to punt in the Fiesta Bowl against Notre Dame as a 31-year-old junior from Newborough, Victoria. Hutton has settled into his niche as a specialist. Often, coach Mike Gundy has pointed to special teams as a key advantage for OSU, noting Hutton’s ability to pin opponents near their own end zones. Even when Hutton’s punts aren’t long-distance, he knows how to put a tricky spin on them that can result in blunders for the Cowboys’ foes.

Hutton has made strides since his early days at OSU, yet his on-field progress isn’t what he emphasizes most. Although Hutton is older than the typical undergraduate student, he has grown up during his college years, too.

“It’s been a real growth period for me, personally,” Hutton said. “And to have the football program and the people of Stillwater and Oklahoma State to support me has really helped me with that.”

Hutton has shared this life-altering experience with Kelsey, and they are each other’s constant advocates.

As long as Kelsey has known her husband, his athletic talent has been apparent. College football in the United States is a new, unpredictable venture for him, but he is no stranger to sports. He played Australian rules football for the Yallourn-Yallourn North club, recording 40 goals in 2015 and 27 in 2017.

“I never doubted his ability,” Kelsey said. “I knew that he was going to be able to excel. He has this knack of being able to excel in any sport that he puts his mind to, so it hasn’t surprised me that he’s been able to step up to the occasion and really help the team out when needed.”

Kelsey met him 12 years ago, when they were younger than many of his current OSU teammates. One of Hutton’s friends happily takes credit for playing matchmaker, and the plan worked – Tom and Kelsey’s relationship blossomed.

They had no idea their future would involve moving to Oklahoma as newlyweds.

The Huttons were taking a chance, but Tom’s decision to punt at OSU wasn’t entirely spontaneous. He had learned about other Australians who had found success through Prokick, some even advancing to the NFL. Boone Pickens Stadium won him over during a visit to campus, where his mom and Kelsey accompanied him.

In January 2019 – winter in Oklahoma, summer in Australia – Hutton arrived at OSU as a student-athlete.

Kelsey couldn’t go with him yet. She was waiting for her work visa to process, but she stayed connected with him on FaceTime, hearing about his football adventures.

During his first practice, Hutton was bewildered. Student-athletes scattered in various directions at the shriek of a whistle, leaving Hutton in the midst of the shuffle like a lost tourist in Times Square.

“I just had to pick someone and follow him around,” Hutton said, laughing.

That was one of several surprises. Hutton said he didn’t expect to travel by airplane for road matchups, thinking the Cowboys would drive to every site instead. Of course, he also had to adjust to punting in intense game-day environments, and he dedicated himself to the process.

Despite his unconventional journey to OSU, Hutton has lived the quintessential college experience: jumping into a new environment and learning on the fly.

He and Kelsey, who joined him after a couple of months, initially moved into the Morrison neighborhood of student apartments on the north side of campus, living near other student-athletes. Kelsey landed a communications job with Housing and Residential Life, a position she held until recently transitioning to the Spears School of Business.

The Huttons have immersed themselves in the OSU community, which has helped Tom persevere through challenging times.

Early in his career, when Hutton missed home, he found solace in the realization that his family was only a flight away from him. When the COVID-19 pandemic hit, he no longer had that comfort. The Australian borders closed as a safety precaution, so the Huttons couldn’t return home.

“It’s almost like you’re on another planet,” Hutton said.

Although his family was far away, Hutton had bonded with his fellow specialists and other teammates. He also cherished moments with Kelsey and their two dogs: Nova, a boxer, and Lucy, their 10-year-old pug who moved with them from Australia.

“It has been quite difficult, but I think Tom and I have been really supportive of one another and really been the foundation for each other,” Kelsey said. “...I think we are both pretty headstrong, and we try to remain pretty positive with all of the obstacles that have been thrown our way.”

The Huttons are looking forward to spending long-awaited time in Australia after the Fiesta Bowl. Until then, Cowboy football is a source of happiness. They’ve been to other sporting events such as NBA games, but Kelsey said nothing compares to the environment college fans create. Even if her husband punts only a couple of times in one matchup – a sign that it’s probably a good day for the Cowboys’ offense – Kelsey tells family members attending games is worth it for the fan experience.

The Huttons’ leap of faith has given them more than they could have imagined. Along with playing a key role on the Cowboy football team, Hutton is pursuing a degree in construction engineering technology/building. Although he recognizes that some Prokick punters have achieved NFL dreams, he acknowledges his age, pointing out that a pro career isn’t his reason for doing all of this.

For Tom and Kelsey Hutton, the phrase “Life is about the journey, not the destination” is more than a cute cliché on motivational posters. It’s their reality – even if the journey is taking place in a once-unfamiliar college town more than 9,000 miles from home.

“I think people get caught up in saying college football’s like a stepping stone to the NFL,” Tom said. “But for me, that wasn’t what I was looking at at all. It’s an experience in itself, and although you don’t make the big money and all that stuff, it’s the life experiences that I’ll take away from it.

“And that’s what I’m still here for.”