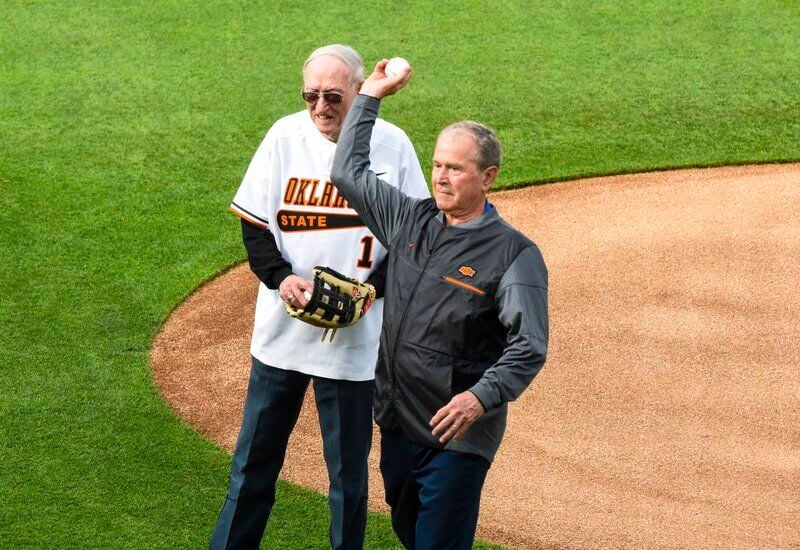 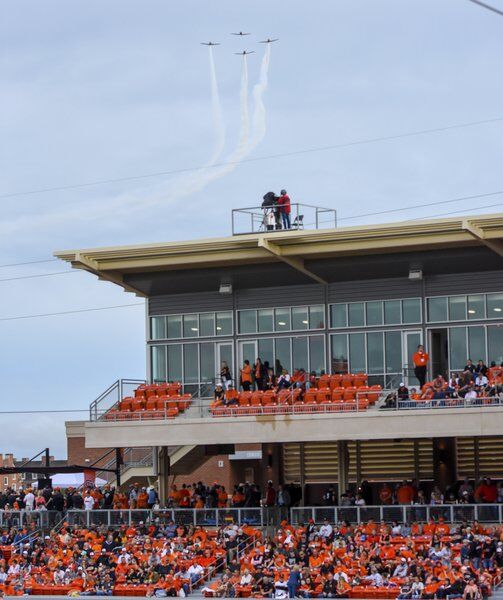 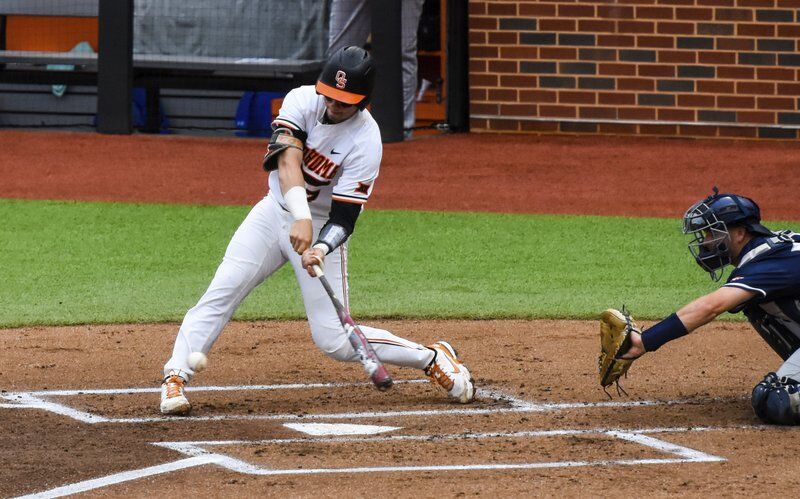 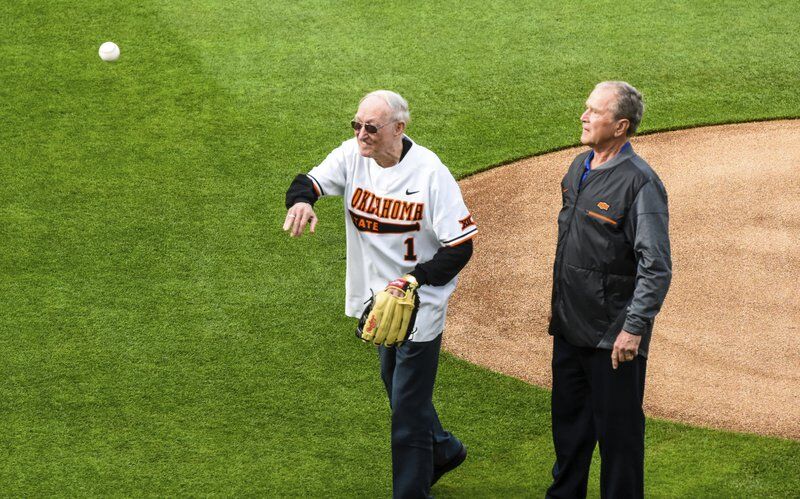 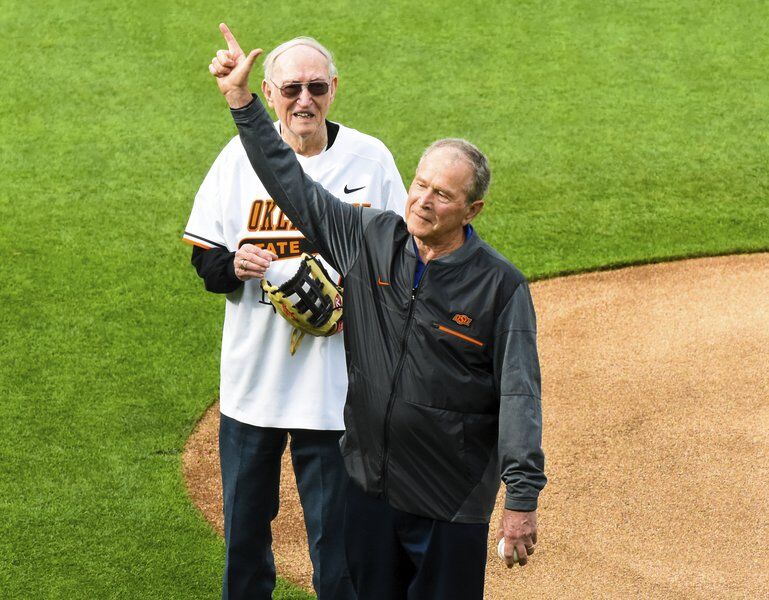 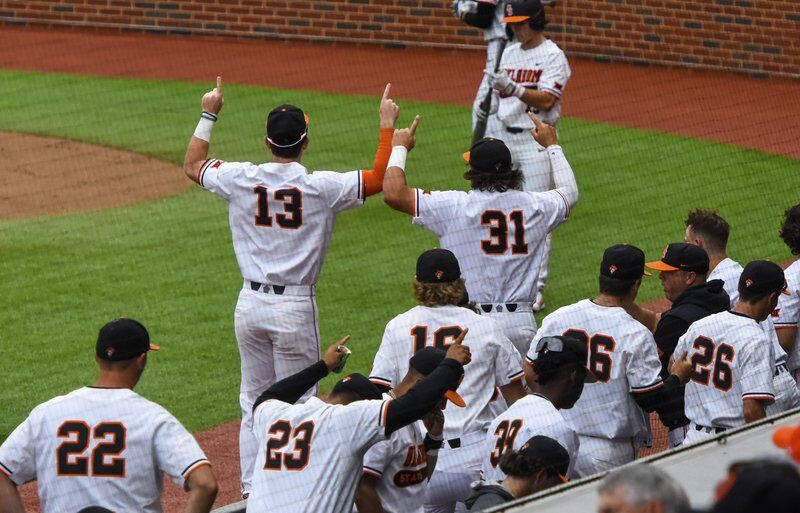 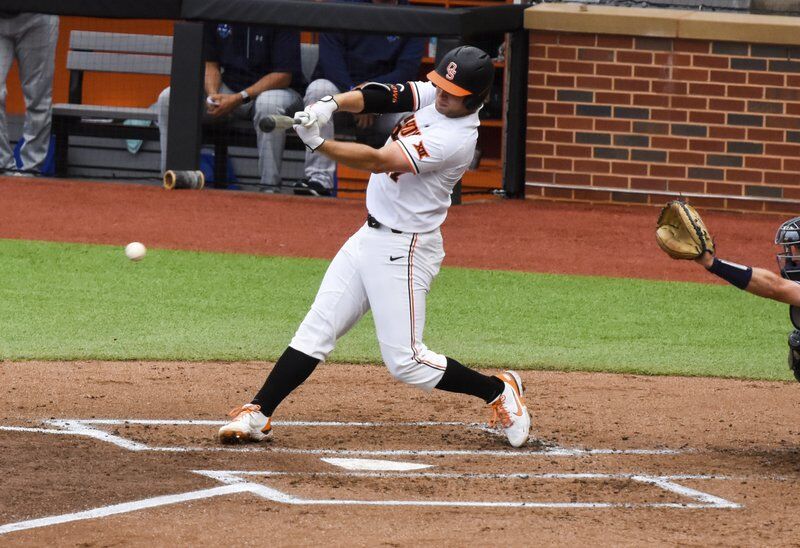 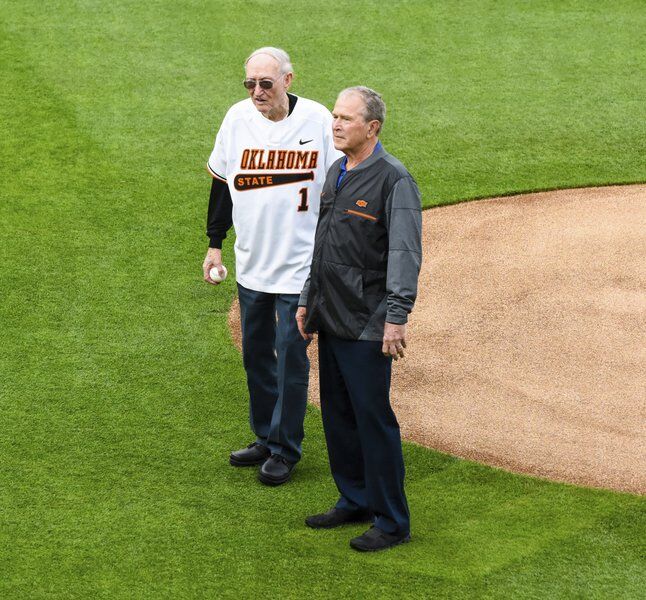 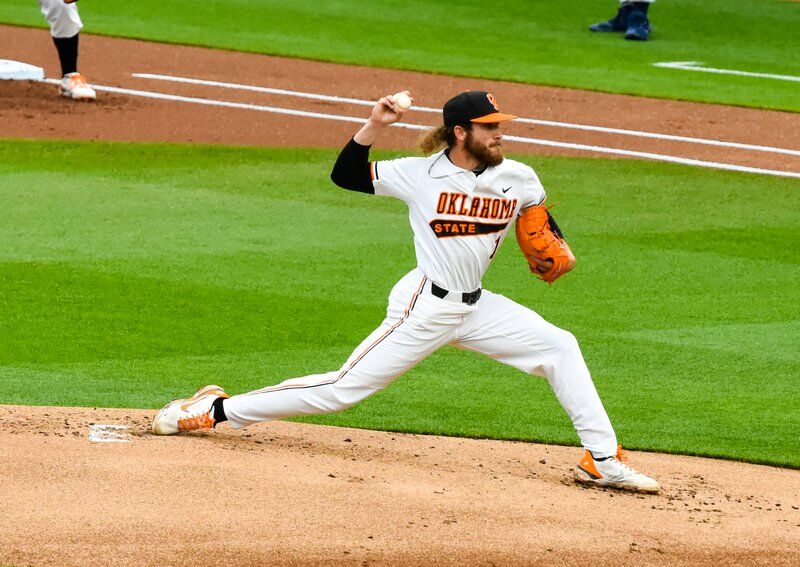 Jason Elmquist/Stillwater News Press Oklahoma State shortstop Hueston Morrill got the start on the mound for the Cowboys in Thursday's game against New Orleans. 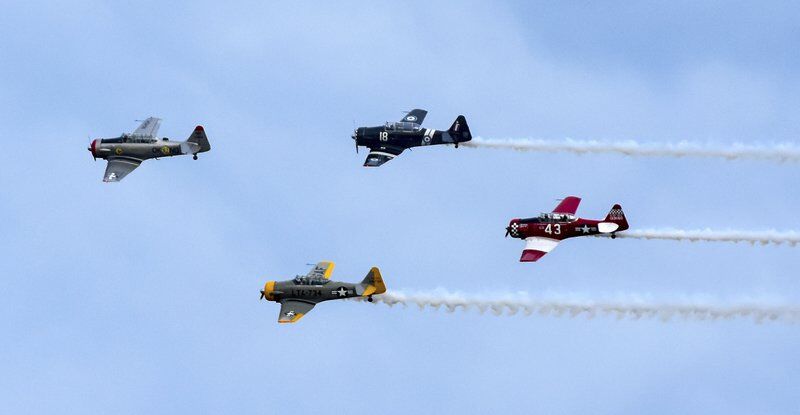 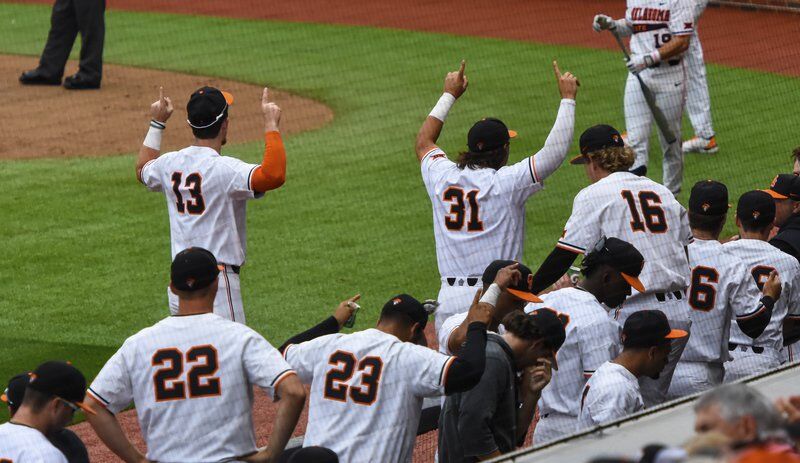 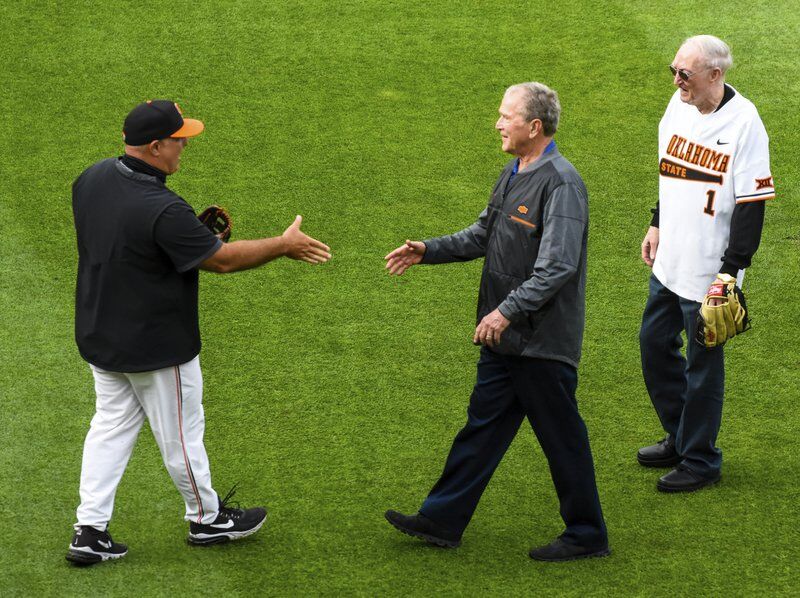 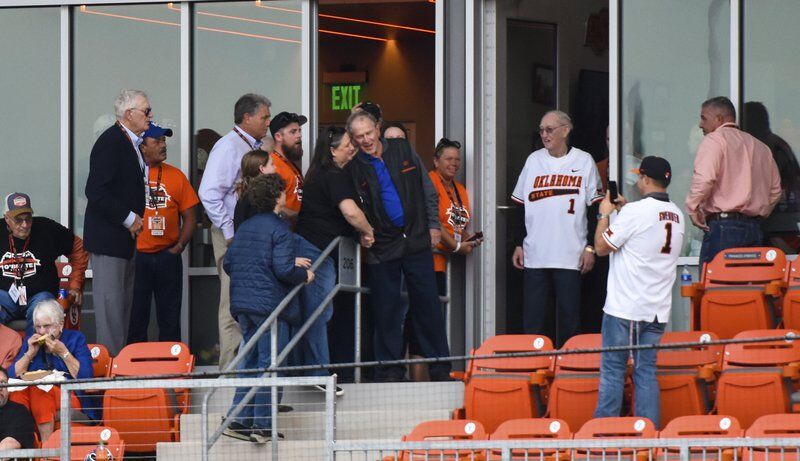 Jason Elmquist/Stillwater News Press Former President George W. Bush poses with Oklahoma State fans in the suites section of O'Brate Stadium after he threw out the first pitch prior to Thursday's game. 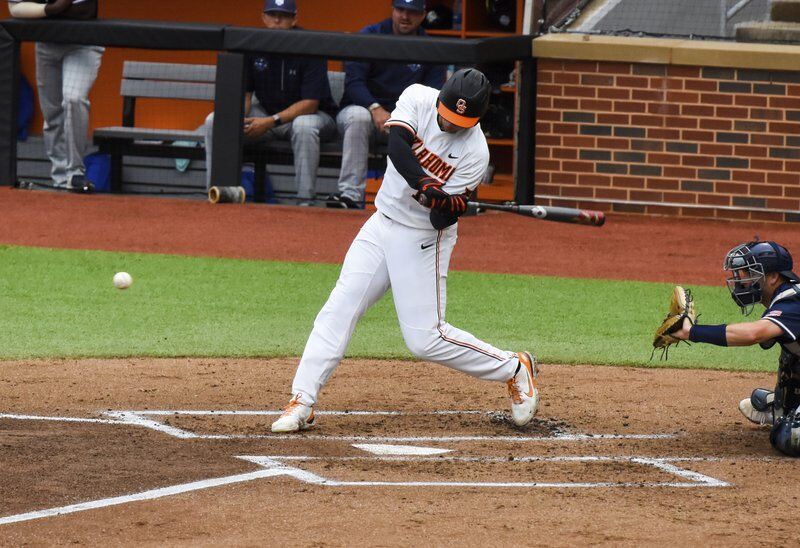 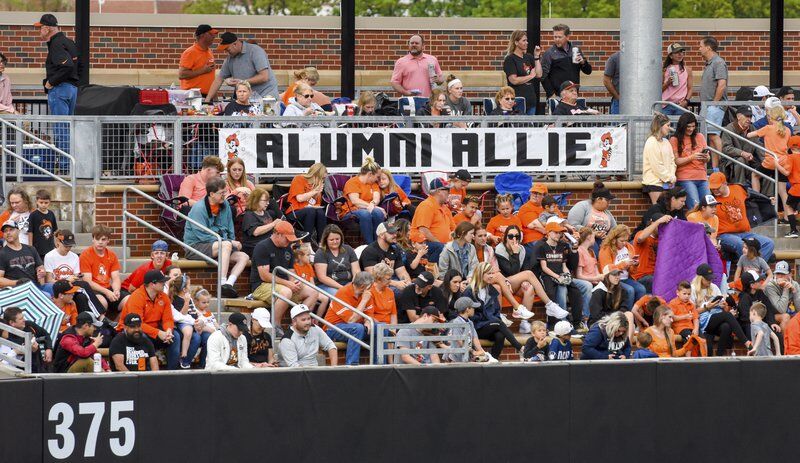 Jason Elmquist/Stillwater News Press Oklahoma State shortstop Hueston Morrill got the start on the mound for the Cowboys in Thursday's game against New Orleans.

Jason Elmquist/Stillwater News Press Former President George W. Bush poses with Oklahoma State fans in the suites section of O'Brate Stadium after he threw out the first pitch prior to Thursday's game.

It was a record attendance of 6,362 people – and that does not even count secret service agents.

A stadium brimming with fans clad in black and orange was the scene for the official dedication of O’Brate Stadium – a year after its originally planned date. The Oklahoma State Cowboys beat the New Orleans Privateers, 9-6, on Thursday, welcoming their opponent with a display of potent offense and another special guest with a big round of applause.

George W. Bush, the 43rd President of the United States, accompanied his friend and primary stadium donor, Cecil O’Brate, to the mound before the game.

Though Bush’s pitch carried less velocity than his pitch at Yankee Stadium during the 2001 World Series weeks following the Sept. 11 terrorist attack, both pitches found the glove and elicited “USA” chants.

“It was unbelievable,” OSU junior pitcher Noah Sifrit said. “Getting to be in his presence was something that I did not ever think I would be a part of. To hear him talk and watch him throw out the first pitch, it was an incredible experience.”

As the game started and fans settled in, it appeared that OSU starting pitcher Hueston Morrill was not entirely comfortable.

Morrill gave up two walks and a single in the frame before senior Salo Iza shot a ball into the left-center gap for a bases-clearing double.

The Cowboys were down three runs before they came to bat, and could not get anything going early.

Although the lively crowd was invigorated when a flyover consisting of four World War II-era Warbirds roared through the airspace above the ballpark prior to the bottom of the first, the OSU offense was quiet that inning.

The Privateers scored their fifth run of the night on a triple from senior Luther Woullard. The Cowboys battled back, answering in the next inning with a two-run home run from senior outfielder Carson McCusker.

The homer kept OSU within striking distance, but the game felt squarely in control of the Privateers.

McCusker, though, was not done.

The OSU offense would not stay down forever. Like the George W. Bush handshake line on the O’Brate concourse, the Cowboy bats took a while. Once they found their groove, though, the OSU batters took the lead.

“The game itself was a great win,” Cowboy coach Josh Holliday said. “The come-from-behind part, the fighting back from a deficit part, the response by the kids was great. There were some clutch moments. I really appreciate the fight they showed and the way we competed.”

In the bottom of the seventh, shortly after a deep flyball down the left-field line off the bat of sophomore third baseman Christian Encarnacion-Strand dropped to plate a run, McCusker came up to bat with the bases loaded.

The 6-foot-8 righty crushed a pitch from freshman pitcher Caleb Seroski, hitting the wall in right field for a three-run double to tie the game at 6. The blast triggered a roar from the crowd that rivaled that of the majestic flyover six innings earlier.

“I remember walking up to the plate and I heard the crowd get up a little bit,” McCusker said. “I was like, alright, I’m going to do this. Do this for my team.”

OSU scored twice more in the inning to take an 8-6 lead that it would only add to.

The dedication night over a year in the making was capped with the Cowboys celebrating a 9-6 victory while postgame fireworks shot into the air. It was well worth the wait.

“It was more than I could ever hope for,” said Sifrit, who was the winning pitcher with just 2/3 of an inning of work. “The atmosphere, seeing all the fans and everyone in the stadium and having George Bush throw out the first pitch and fireworks and everything else that went along with the game. It was incredible and I really enjoyed it.”

For veterans like McCusker who have sunk their lives into the program, the moment was a memorable one.

“Super special,” McCusker said. “Just like all the guys who came back last year, all the fifth-year guys, we really soaked it all in and were appreciative of the moment. It was great to be a part of.”

Bush spoke with both teams before the game and did his research on the Cowboys program. Holliday said the president’s visit was not a quick stop to check a box, but an engaging time that his players will remember forever.

“He made us feel special,” Holliday said. “The kids will never forget that their whole life. They’ll tell that story every year on Christmas break, at a holiday gathering, they’ll tell it at Thanksgiving and in summer by the pool. Tonight, was a moment in history for our program.”