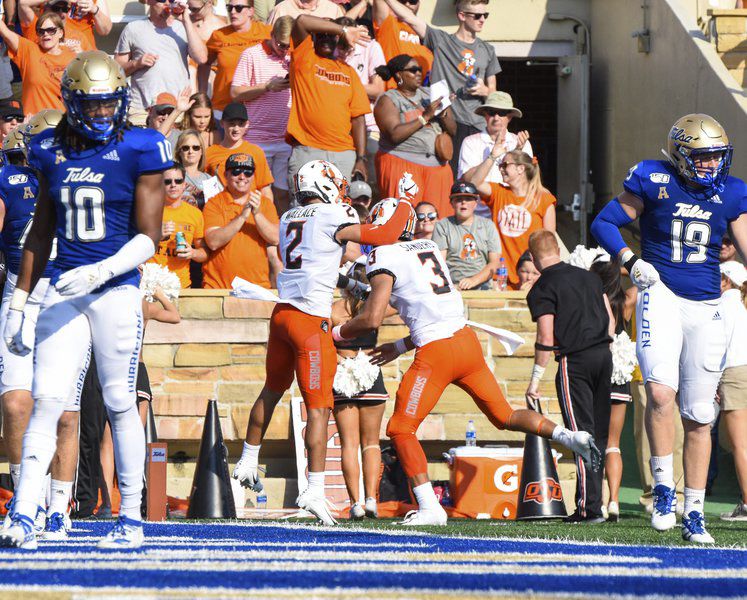 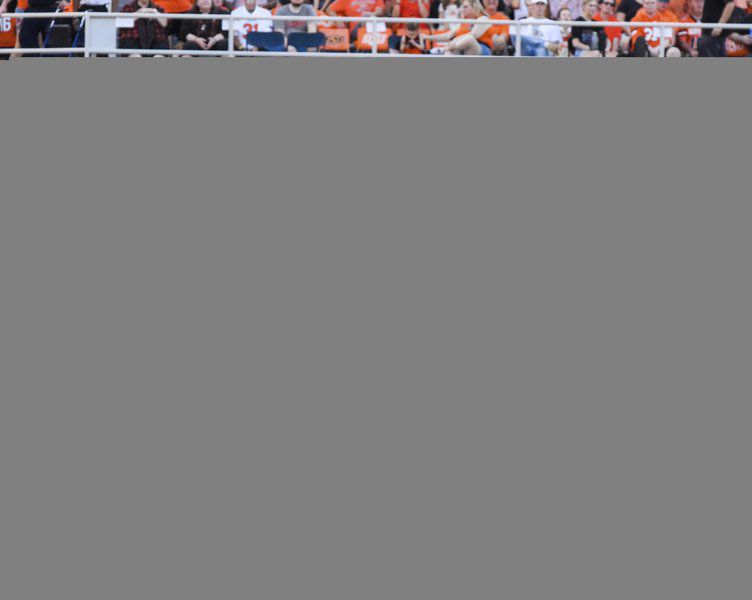 Oklahoma State grad transfer Jordan McCray hauls in a pass during Oklahoma State’s home opener at Boone Pickens Stadium. After the X receiver position for OSU was shut out against Tulsa, News Press sports editor Jason Elmquist thinks they will get their day under the lights against Texas.

Oklahoma State grad transfer Jordan McCray hauls in a pass during Oklahoma State’s home opener at Boone Pickens Stadium. After the X receiver position for OSU was shut out against Tulsa, News Press sports editor Jason Elmquist thinks they will get their day under the lights against Texas.

Another Big 12 Conference season grows near for Oklahoma State, which brings a return of the 5 Bold Predictions.

Just like most Oklahoma State fans want to forget last season, so too do the Predictions. They went about as poorly as the Cowboy season – which had some losses that we shall never have to talk about again (hopefully). Here’s to hoping this Big 12 season goes a little better for both.

The Dream Team will come to play

The self-named Dream Team of 6-foot-6 wide receivers for OSU– Jordan McCray, C.J. Moore and Patrick McKaufman – were not utilized at all against Tulsa. And it wasn’t just zero catches among the three, they were targeted a combined two times all game – once to Moore, once to McCray. But that should change this weekend.

We know Tylan Wallace, who leads the country in receiving yards and receiving touchdowns, will get his – it’s a given. But the Dream Team will get back on track, as well. The Longhorns’ secondary is giving up 330 yards per game through the air – which ranks last in the Big 12 Conference by more than 100 yards.

That defense has made an LSU quarterback a Heisman front-runner, as Joe Burrow’s 471 yards passing against UT vaulted him the eyes of Vegas odds makers – and is his largest output this season, despite playing the likes of Georgia Southern and Northwestern State. This is the same Burrow who averaged 223 yards per game last season for the Tigers. That same secondary also allowed 340 yards passing against Louisiana Tech in the opener. The eight passing touchdowns Texas has given up this season, is also the most of any Big 12 defense – two more than Oklahoma and OSU.

After the Longhorns were torched for 222 yards by Wallace last season, one would think the defense would try to bring that number back down to mortal standards – which means the OSU X receivers could see more targets this week.

Texas will get its first 100-yard rusher

It’s become a bit of a trend recently – as common as death and taxes – that there is no rushing talent in the Texas backfield. The last Longhorn to rush for at least 1,000 yards in a season was D’Onta Foreman in 2016 – with over 2,000 yards – and before that, it was Jamaal Charles in 2007.

It’s not going to suddenly change this season, either, with the leading rusher being Keaontay Ingram at 181 yards on 34 carries through the first three games. And it was Ingram who was the last Longhorn to surpass 100 yards rushing in a single game – 11 months, and 11 games ago, with 110 against Baylor. While he doesn’t have a lot of total yardage, he does have a good average. He rushes the ball for 5.3 yards per carry this season – and his best outing was 11 carries for 78 yards in the season opener, followed closely by a 74-yard output on 13 carries against Rice last week.

While it hasn’t been impressive (for a while), the OSU defensive front has been dinged up and it shows. The Cowboys rank seventh in the conference in rushing defense, allowing 162 per game, and with recent injuries on the defensive line and lingering injuries at linebacker, Tulsa was able to rush for 158 yards with Shamari Brooks rushing for 107 yards this past week.

Placekicking will play a part

OSU’s Matt Ammendola and Texas’ Cameron Dicker haven’t gotten a lot of work in with field goals three weeks into the season, but that may change this week.

Ammendola has made all three of his attempts – with a long of 37 – and Dicker is four of five with a long of 57. But looking back over the recent matchups between the Cowboys and Longhorns, you have to believe that either one of these kickers could end up being the goat for their respective team.

Three of the past four games in this series (all four of which OSU has won) have been decided by three points – 30-27 in 2015, 13-10 in overtime in 2017 and 38-35 a year ago. And Vegas odds makers have seen that trend, and recognize the talent both teams present. Texas is a five-point favorite as of press time, and with the automatic three points given to a home team, they feel it would be a two-point contest on a neutral field.

Sanders will shine under the spotlight

The eyes of Texas will be upon OSU’s redshirt freshman quarterback Spencer Sanders – over 100,000 in person. Texas announced Tuesday that the game is sold out, with the primetime game on ABC getting the all-star broadcast booth – Chris Fowler and Kirk Herbstreit will be on the call. That’s a lot of attention, and pressure, on an inexperienced quarterback making his first conference start of his career.

It’s been a respectable first three games for Sanders, but if you took the top talent from each Oregon State, McNeese and Tulsa, you still wouldn’t have a team the caliber of Texas. But growing up in Texas, he’s used to mounting pressure from playing in a state that is rabid for high school football.

In high school, he got to play in AT&T Stadium – home of the Dallas Cowboys, which has a capacity of 100,000. The Billy Ryan High product out of Denton put on a show in the playoffs his entire high school career – reaching the quarterfinals in 2015 and the semifinals in 2016 and 2017 in Class 6A DI. The moment will be big, but he’s thrived in those moments before, can he now do it at the college level?

Typically the last prediction is a bit of a crack-pot shot of sorts – who receives Bill Snyder’s hand-written letter, Kliff Kingsbury making his last trip to Stillwater (which was right last year), calls for fake punts (which could happen this year with the rugby-style punter for OSU), etc. But this time, it just wrote itself.

According to LSU coach Ed Orgeron, when the Tigers were preparing for their game in Austin, Texas, they had been forewarned by the Louisiana Tech team that the air conditioning in the visitor’s locker room was not working.

And so began Swampgate in Austin. Orgeron said they traveled with fans (of the motorized variety, too), which softened the conditions in the locker room, but said it was still a bit humid. It prompted Texas Athletic Director Chris Del Conte to release a statement how the air conditioning was “in good working order,” and an internal review by the university – which based on information from internal sensors indicated the locker room was at 68.5 degrees prior to LSU’s arrival and peaked at 74.7 degrees.

OSU coach Mike Gundy said this week, “They have a nice facility. We’ve never had any problems with air.”