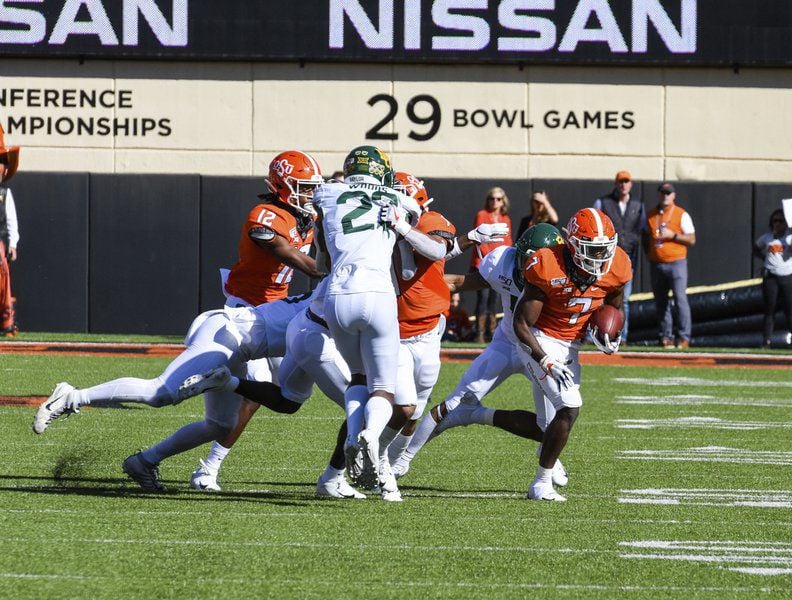 Jason Elmquist/Stillwater News Press Oklahoma State running back LD Brown (7) follows his blockers on a rush attempt in the first quarter of Saturday’s game against Baylor. 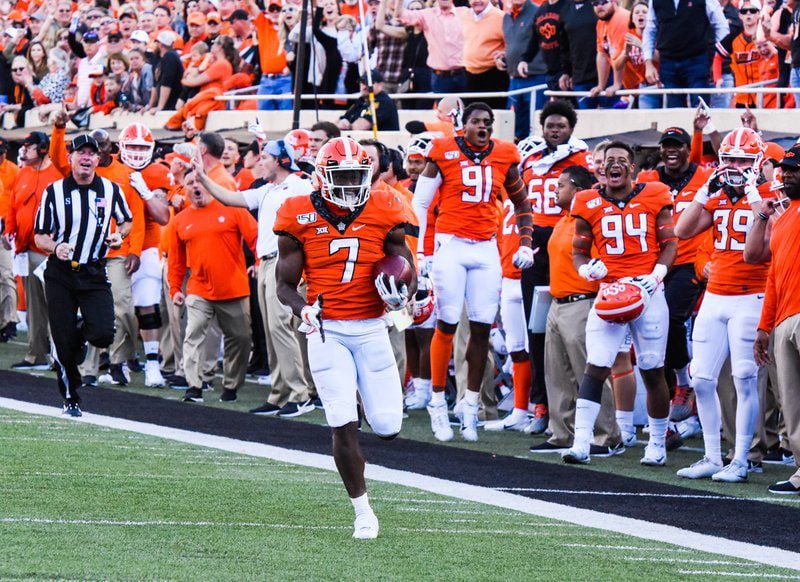 Jason Elmquist/Stillwater News Press Oklahoma State running back LD Brown streaks up the OSU sideline on his way to a 64-yard touchdown run early in the fourth quarter of Saturday’s game against Baylor.

Jason Elmquist/Stillwater News Press Oklahoma State running back LD Brown (7) follows his blockers on a rush attempt in the first quarter of Saturday’s game against Baylor.

Jason Elmquist/Stillwater News Press Oklahoma State running back LD Brown streaks up the OSU sideline on his way to a 64-yard touchdown run early in the fourth quarter of Saturday’s game against Baylor.

Oklahoma State’s birthday boy tried his best to keep the Cowboys in a position to knock off No. 18 Baylor.

Celebrating his 22nd birthday on Friday, LD Brown had a party at the start of the fourth quarter that gave OSU a three-point lead with 12 minutes remaining.

With the Cowboys looking for a spark at the start of the fourth quarter, Brown delivered just that by taking a handoff, breaking three tackles a few yards past the line of scrimmage and hitting another gear on his way to a 68-yard touchdown.

“It just got us going. It gave us momentum,” Brown said. “It’s a game of momentum. We saw that we would have to keep scoring based on what the defense was doing, but it just kept us going. We knew it was going to be a dog fight, so that’s what we did.”

Unfortunately for the Cowboys, the momentum didn’t stay on their side long as Baylor would score the final three touchdowns of the game to walk out of Boone Pickens Stadium with the 45-27 victory.

But there was certainly improved signs of promise from Brown.

Cowboy coach Mike Gundy had commented last week that the offense needed to try to give Brown more chances to run the ball because he was attacking the hole quicker than the first four games of the season.

“It’s his birthday, and I was happy he got one (touchdown),” fellow running back Chuba Hubbard said. “It was a long one. He was looking fast, so I’m happy for him.”

While the redshirt junior’s touches haven’t increased in the past three weeks, his yards have.

In the first four games of the season, Brown was averaging just 2.1 yards per carry while averaging around four carries per game.

Over the past three games, Brown is averaging 11 yards per carry – though that is obviously boosted by Saturday’s 68-yard run and a 23-yard scamper at Texas Tech. However, even taking out the big runs, he’s averaging 3.3 yards per carry in that span with his three other carries Saturday going for an average of 3.7 yards.

While the smaller runs weren’t as big as his touchdown scamper, his touches Saturday proved to be just as important.

Brown had two catches – his first two of the season – for 17 yards, with the first catch going for eight yards on a third-and-7 play that extended the drive on OSU’s first scoring drive of the game.

His second run of the game also picked up a first down on that same drive, while his third run – for 5 yards – moved the chains on a third-and-1 play in the third quarter. And while that drive didn’t lead to a score, it did flip the field for the Cowboys, as freshman punter Tom Hutton pinned Baylor down at the 7-yard line.

“He came in, broke some tackles, made some good runs for us,” Gundy said. “Chuba still had a lot of carries with 32, but he’s averaging five yards per carry, which is a good thing. LD was in there a little bit more and got some good yards for us and we have to continue to do that.”

The growing signs of life from Brown should help the Cowboys take a few more of those carries away from Hubbard, the country’s leading rusher.

“It’s harder to stop two then one, so that would be awesome,” Hubbard said. “He has a lot of potential. He’s just got to build from it.”