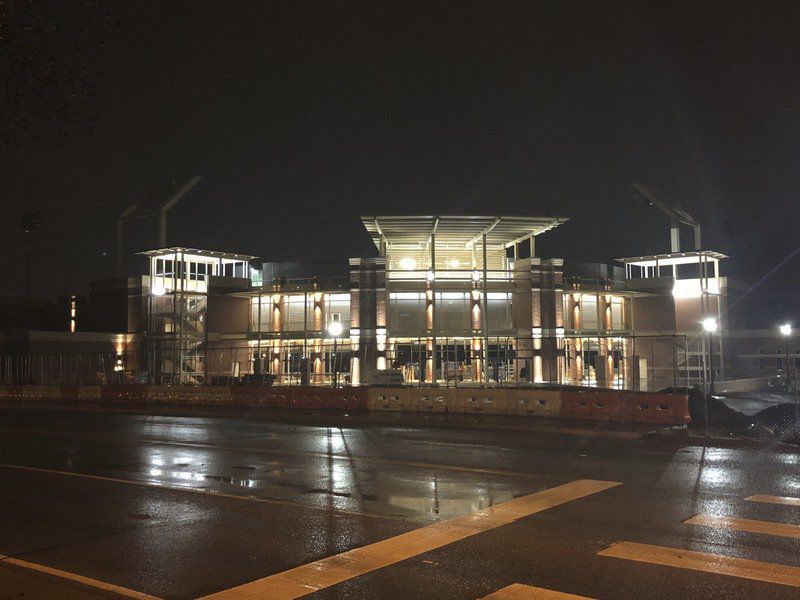 Jason Elmquist/Stillwater News Press Oklahoma State’s O’Brate Stadium is progressing along and is supposed to be ready for use by OSU baseball’s Big 12 Conference opener against TCU in late March. The Cowboys will play its home games at Allie P. Reynolds Stadium until then. 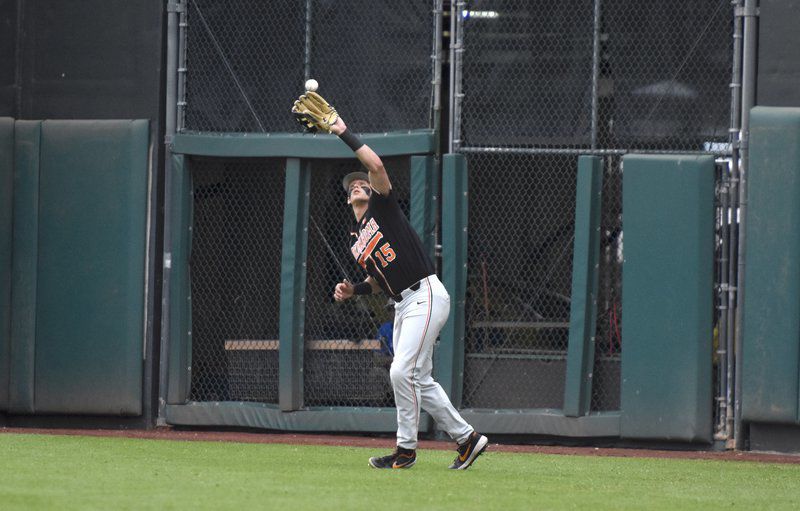 News Press file photo Oklahoma State senior outfielder Cade Cabbiness is part of a corps of Cowboys returning from last year’s baseball team that was one win away from the College World Series. 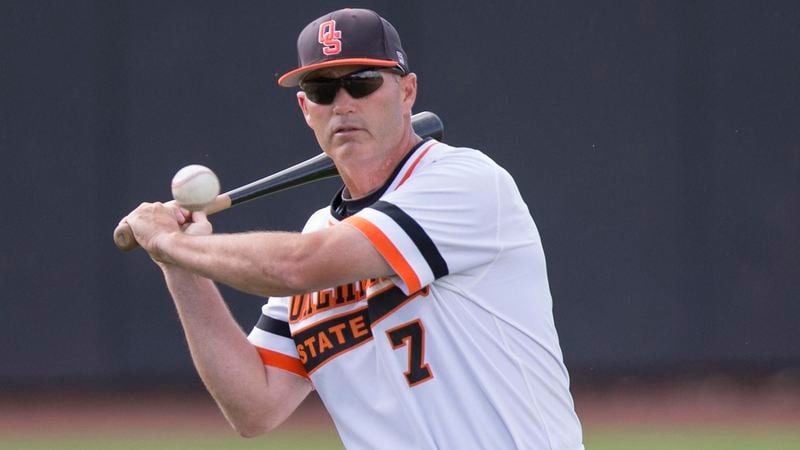 News Press file photo Marty Lees returned to the Oklahoma State baseball coaching staff prior to this season after four years as the Washington State head coach. He had a 68–133–1 record leading the Cougars. He was a part of Josh Holliday’s original coaching staff at Oklahoma State, serving as an assistant in Stillwater from 2013-15. He is one of three new members to this year’s coaching staff, along with former Major League Baseball all-stars Matt Holliday and Robin Ventura.

Jason Elmquist/Stillwater News Press Oklahoma State’s O’Brate Stadium is progressing along and is supposed to be ready for use by OSU baseball’s Big 12 Conference opener against TCU in late March. The Cowboys will play its home games at Allie P. Reynolds Stadium until then.

News Press file photo Oklahoma State senior outfielder Cade Cabbiness is part of a corps of Cowboys returning from last year’s baseball team that was one win away from the College World Series.

News Press file photo Marty Lees returned to the Oklahoma State baseball coaching staff prior to this season after four years as the Washington State head coach. He had a 68–133–1 record leading the Cougars. He was a part of Josh Holliday’s original coaching staff at Oklahoma State, serving as an assistant in Stillwater from 2013-15. He is one of three new members to this year’s coaching staff, along with former Major League Baseball all-stars Matt Holliday and Robin Ventura.

The hype of the upcoming Oklahoma State baseball season has been building for weeks – even months or years – and lot of it has nothing to do with the players on the diamond.

The Cowboys’ 2020 season begins in just over two weeks with a four-game trip to Phoenix, Arizona, before they return home for five-straight games.

However, those games won’t be played in their new stadium that sits on the northeast corner of McElroy Road and Washington Street. The same goes for the next nine home games – all in March.

The Cowboys will begin their season in historic Allie P. Reynolds Stadium, where they have played since 1981. Yet, the hype and excitement about moving into O’Brate Stadium on March 20 – when the Cowboys host TCU for their first Big 12 Conference series of the season – is growing and has been since the press conference where OSU athletic director Mike Holder announced the Cowboys’ new home in March 2018.

“It’s going to be hard to say goodbye to Allie P., but I am really excited to see what the new baseball stadium does for our community,” OSU senior Cade Cabbiness said Monday at the team’s preseason media day. “It’s going to bring in a lot of new fans and going to be awesome. “

The $60 million stadium is still under construction, but is expected to be open for the TCU series. It will host three Big 12 series and a pair of Bedlam-series games this spring.

The stadium will feature a number of amenities and features that are accustomed to minor league ballparks around the country. The complex will have 3,500 permanent seats, 13 suites and 400 premium seats in club and suite areas. The seating can be expanded to 8,000, if needed.

There will also be a 360-degree concourse that wraps around the stadium, in addition to a playground and outfield plaza areas to make the complex more family friendly. Tailgating tents will also be featured on the concourse area, along with a student section and terrace seating in the stadium.

Beyond the left field wall will be a 2,000-square foot video board that will feature top-of-the-line graphics and video content to make for a better fan experience. On the opposite side of the outfield, there will be an area for hosting game day birthday parties and group functions.

“There’s nothing about it that’s not exciting,” OSU coach Josh Holliday said. “I think the thing that’s exciting is just the challenge of just getting ready to play, getting a chance to play a few more games at Allie P., diving into some really tough road games early in the season and then the excitement of transitioning over will be something that’ll be healthy for us and exciting and all the different things. I’ve never been a part of something new like this before, so that’ll be fascinating to see how it plays out. But it’s all good. Everything about it’s a positive thing.

“It’s all part of the excitement and growth and just part of this season and things that we’ll just do a great job to deal with as a team. But yeah, I’m sure there’ll be tons of awesome, exciting new learning opportunities as the year progresses and obviously, O’Brate Stadium is a beautiful place, and once you get inside that, you’ll see what the excitement’s all about.”

The plans for a new baseball stadium had been in the works for many years. In fact, when Holliday was named the coach in 2012, the discussions were already happening.

“I did know, though, that when I came back to Stillwater and had a chance to come back here and be the head coach that we didn’t need to do something,” Holliday said. “You can’t just hold on to kind of what we built in the early ‘80s and think that that was going to carry us throughout the course of time, because so many other programs and places that really jumped on the college baseball landscape and were doing some big things.”

Eight years later, Holliday is nearing the opening of such a venue at his alma mater. First, the Cowboys must play 14 games in the ballpark Holliday grew up in as a Stillwater youth.

When it comes time to move into O’Brate Stadium, the eighth-year coach isn’t quite sure how it will happen. He jokingly said it might happen quickly, because the players and staff are anxious to make it their new home.

“I mean, it’s one day at a time. That’s all you can do,” Holliday said. “You got to get ready for your season and you know what’s in front of you. And then when it comes time to transition over to a little one block walk over, so I imagine we’ll probably pack our bags pretty quick and sprint over there – that’s how excited we will be. So, not a lot of time right now really spent on that part of it – focusing on the season and getting ready for game one, because it’s going to be here before you know it.”

Of course, there will be other logistics to work out once the Cowboys move into their new home. For the players, the field and the fence around the field will take some time adjusting to while playing games.

From Holliday’s perspective, he doesn’t see too many adjustments having to be made. The stadium sits in the same direction as Reynolds Stadium, but he did say shadows could be the biggest issue.

“Well, every time I go over there, I always kind of peek at the sun, feel the wind and say, ‘Wonder what the ball would do today,’” Holliday said. “So, I’m excited to see when we do get in there, how it plays. The surface is beautiful and the dimensions are relatively similar to where we’re currently at, so I feel like they’ll be some definite things that instinctively we’ll kind of expect.

“But, you never know – it’s a taller stadium, there’s more steel and more vertical stadium that’ll kind of surround home plate. There’s quite a bit of shadowing there, so that’ll be interesting to see how you see the ball. That will be the fun part is just seeing the first towering flyball and seeing how far it actually goes and seeing how the sun shows up and the wind patterns, but I mean, again, all exciting first, for sure whenever that occur. I can’t wait. It’ll be fun to see it.”

Moving into a new stadium isn’t the only thing drawing attention and hype around the OSU baseball season. The coaching staff has done that, too.

Shortly following the 2019 season, OSU announced the return of Marty Lees as an assistant coach and recruiting coordinator. Lees was a member of the OSU staff when the Cowboys went to the College World Series in 2016.

Later in the summer it was announced that former Stillwater High star and seven-time Major League Baseball all-star Matt Holliday would be joining his older brother’s staff as a volunteer assistant coach.

The final piece of the puzzle came recently. Former Cowboy Robin Ventura was named a student assistant on the staff. Ventura was a three-time All-American at OSU who played 16 years in the MLB before managing the Chicago White Sox for five years.

“Well, I mean, they both have such a great life experience inside of the game at so many different levels,” Holliday said. “Both played it at such a high level that they have just tremendous credibility with the kids when it comes to some of the cool conversations that I’ve already heard occur between them where they’re just sitting there on the bench talking baseball or telling a funny story or just kind of mentoring them. …

“We have some guys that work really hard and take this really seriously, and then those guys have this perfect ability from time to time to know how to lighten the mood or put their arm around the guy. So, they just have a lot of really strong personal experiences that they draw upon. They look at these guys and they see probably 18-, 19- and 20-year old versions of themselves and can pass on just just a really good vibe to the kids. They’re just good men. They have a great vibe about them.

“The game teaches you so many things. Sometimes, when you’ve been coaching for 20 some odd years, you’re a little bit more task driven and sped up in terms of trying to get ready for a season. Then to have new perspectives and guys that are coming into the college game or back to the college game – they bring another perspective that is super valuable and can really benefit a team. So those things are, you know, always opinions and different experiences. They really help everybody kind of balance each other out.”