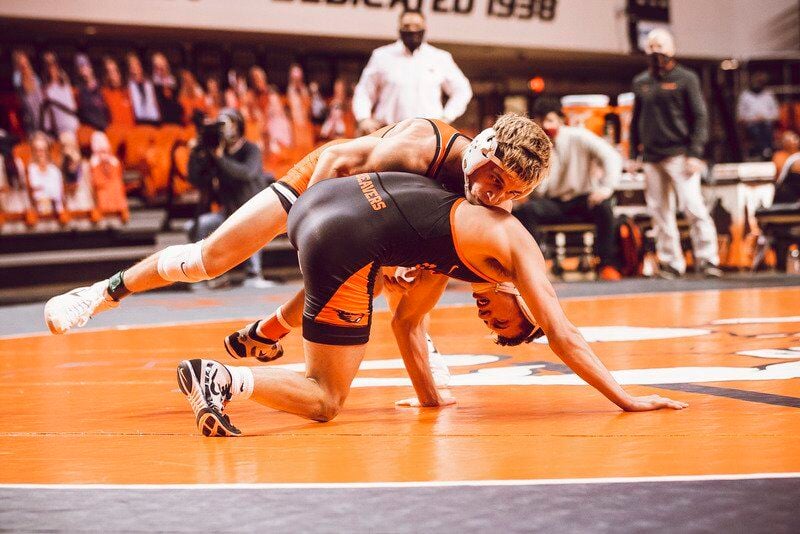 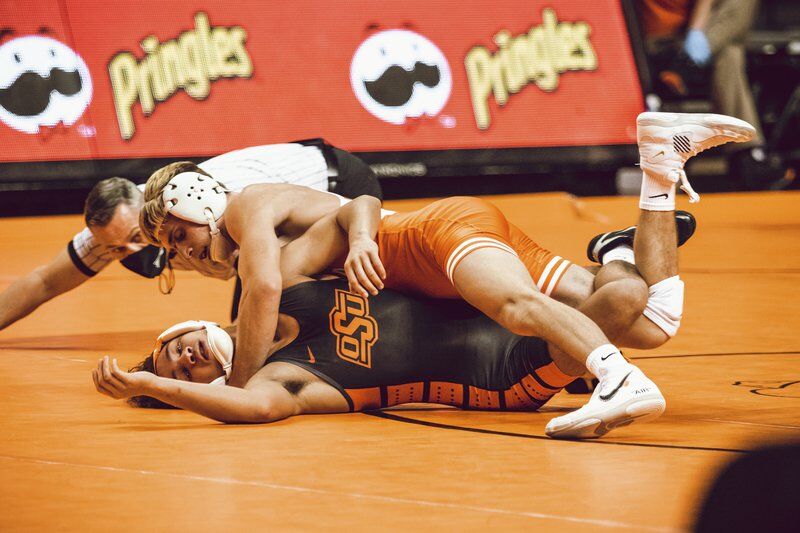 Devin Wilber/OSU Athletics Oklahoma State freshman Trevor Mastrogiovanni, top, had to beat teammate Jakason Burks, bottom, and No. 16-ranked Reece Witcraft on the same day – nearly a month after returning from mono and COVID-19 – in order to earn his spot in the starting lineup at 125 pounds.

Devin Wilber/OSU Athletics Oklahoma State freshman Trevor Mastrogiovanni, top, had to beat teammate Jakason Burks, bottom, and No. 16-ranked Reece Witcraft on the same day – nearly a month after returning from mono and COVID-19 – in order to earn his spot in the starting lineup at 125 pounds.

When Trevor Mastrogiovanni beat No. 16-ranked Reece Witcraft in Oklahoma State’s rankings matches, the Cowboy fan base and wrestling world didn't realize just how big a moment that was for the true freshman from Blair Academy in New Jersey.

Nearly a month earlier, the 125-pounder from Sparta, New Jersey, wasn’t on the mat with his teammates.

Instead, he was quarantined – along with his father – in a rental house in Stillwater, battling COVID-19.

“Everyone says, ‘It’s not real. It’s destroyed. It’s not that hard,’” Mastrogiovanni said. “It was difficult on both of us. It was a struggle.”

Making the battle with the virus that has circumvented the world more difficult for the 19-year-old was the fact his body and immune system had already been weakened by a bout of mono right before he contracted COVID.

Between the two viruses, he estimated he was away from the mat for about two months.

“I was out for about five weeks with mono and getting ready to come back, then I wasn’t really even feeling many symptoms or anything, it was just bad taste and loss of taste,” Mastrogiovanni said. “I was like, ‘I gotta get checked, maybe it’s the mono.’ And it was just another huge time off the mat. …

“I was disappointed because I haven’t wrestled in so long, and the season’s coming, and I’m taking all this time off. For a freshman to step in and only have a few weeks to practice before I wrestled this first match was difficult. I had to dig pretty deep and do a lot of extra work to get back.”

Another difficult aspect of contracting COVID, however, wasn’t just his own personal battle with the virus.

It was the knowledge that he was personally responsible for his father having come down with the COVID, as well.

“I was upset because I know it came from me – he didn’t give it to me, I gave it to him,” Mastrogiovanni said. “So I was upset, obviously, giving it to him. It reacts differently with everyone, so you just never know. … I wasn’t much worried about myself as I was worried about him, but he’s tough and he got through it pretty good. I was surprised.”

Mastrogiovanni said he didn’t return to the mat until nearly two weeks after Thanksgiving. With that timeline, he had less than 30 days to recover from the effects of mono and COVID and get his conditioning to a point where he could wrestle in seven-minute matches.

While he still doesn’t believe he’s back to 100 percent of where he was prior to his bout with the two viruses, he did manage to win two matches in rankings duals – with the most important being a 3-2 decision over Witcraft to clinch the starting spot at 125 pounds, which came after an 8-1 decision against freshman Jakason Burks earlier in the day.

“When I first got back, I was hurting,” the New Jersey native said. “I was hurting. That mono and COVID was really that double whammy. It was taking a toll on me, but each week I feel better and better. That’s the good thing, my cardio is back, I’ve just got to build my forearms, build my legs at little bit and then I’ll be back to what I was.”

Having moved halfway across the country for college, Mastogiovanni has also dealt with the mental aspect of the global pandemic. He mentioned it has been over a year since he’s seen his brothers.

So getting to make his college debut with tradition-rich Oklahoma State – earning two wins inside Gallagher-Iba Arena – with at least his dad in attendance helped his perspective on things.

“It was awesome. He’s been there for almost all my matches, no matter what,” Mastrogiovanni said. “He always travels, he always finds a way to get to the matches, which is awesome. … My relationship with my dad is so strong because of this sport, and winning with him and going up to him after means a lot.”

Not only is he continuing to battle back from the two illnesses that derailed two months of his first semester in college, but Mastrogiovanni has the added pressure of having a formerly ranked wrestler on his team breathing down his neck if the freshman were to slip up at any point. He also now finds himself as one of three freshman ranked by InterMat Wrestling at 125 pounds, since getting a pair of dual wins to open the season – moving him to being ranked No. 18.

“I don’t want them to overthink anything,” Cowboy coach John Smith said of his own three true freshman wrestlers who have been inserted into the rankings. “There’s a tendency of freshmen overthinking things after they have a successful weekend – or even if they have a disappointed one – just don’t overthink stuff. …

“Just stay focused and enjoy the moment. I think that’s the big thing, just enjoy the moment – that’s what’s going to help you perform at a high level. One of my greatest years of wrestling was my freshman year, everything seemed to get a lot tougher and a lot more pressure after that.”