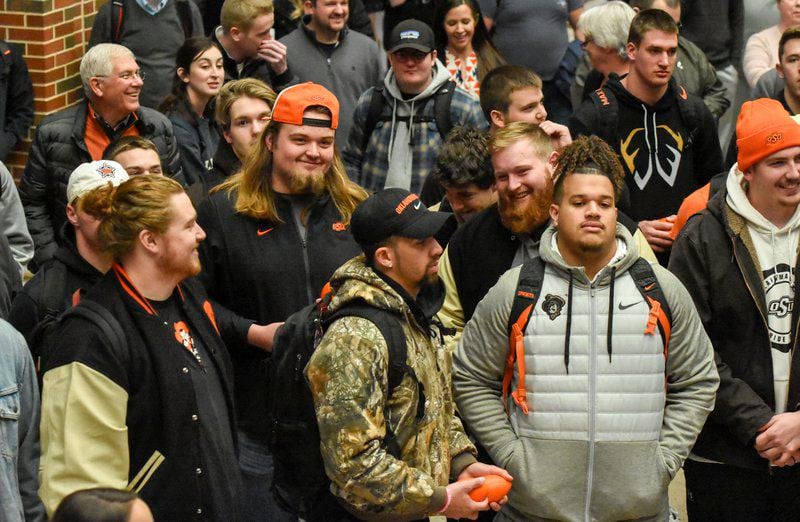 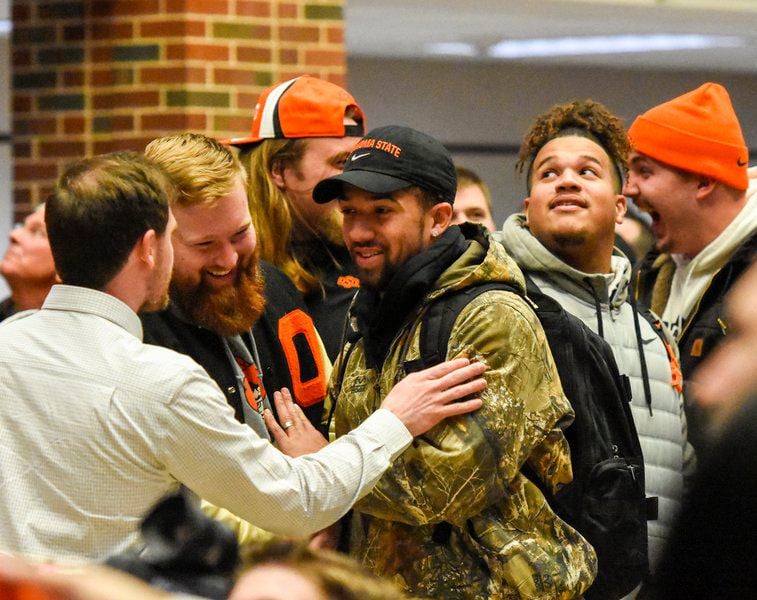 Spencer Sanders admitted it was all a facade at the Texas Bowl.

While Oklahoma State football coach Mike Gundy proclaimed they would utilize both quarterbacks – and technically OSU did with Sanders running the ball just twice – it was all a bit of a smoke screen.

According to Sanders, there was no intention for him to throw the ball in the bowl game just a month after he had thumb surgery on his throwing hand.

“I couldn’t throw it really at all,” Sanders said Tuesday. “It was kind of a ‘just get it done during warmups so that (Texas) A&M can’t see it.’ But after that, I was done.”

But another month removed, he is throwing more regularly.

He said there isn’t the discomfort he felt while throwing in pregame.

“It’s fine now,” Sanders said while rubbing the base of his thumb. “My hand’s fine.”

He may be throwing again, but it won’t be to Oklahoma State’s top receiver any time soon.

Tylan Wallace was walking around the Oklahoma State student union with no visible limp from an ACL injury he suffered in practice leading up to the Iowa State game in late October. However, he is still working to return from the surgery that sidelined him for the final six games of the season.

Wallace, who announced on Jan. 1 his plan to return to Oklahoma State for his senior year, made it sound like he’ll be able to get going again by spring practice, but does not appear that he will be a full participant during the two months in which the team gets to work in March and April.

“They said I’m ahead actually in my rehab, so it’s gone really well,” Wallace said. “… I think by spring I’ll probably be working on cutting and stuff, or just running and jogging. They said I could jog right now, but they want to take it slow and make sure everything is all good before I start working on things.”

With the three-headed monster of Sanders, Wallace and Chuba Hubbard returning in 2020, the hype for the fall has been rampant among fans and players alike.

But it’s not just hype for the players, it’s expectations.

There was a lot of talk from all of the Cowboys at Tuesday’s pep rally in the Oklahoma State student union about winning a national championship.

“I’m not setting myself short for anything,” Sanders said. “Everybody talks about taking steps at a time, but I don’t really like taking steps – either I’m going big, or I’m going home.”

If Oklahoma State is to get the level of being a national championship contender, it’s going to start with Sanders.

The Cowboys know what they have with Wallace and Hubbard – former finalists for the best wide receiver and best running back in the country, respectively – but all four of the teams in the College Football Playoff featured quarterbacks that finished within the top seven in Heisman Trophy voting.

“Do I believe that we can go to a national championship? Yes. And I believe that everybody has the potential to play like a national championship team,” Sanders said. “I feel like I have the potential to play like (Clemson quarterback) Trevor Lawrence or anybody else. I feel like I’m just as good, I’ve just got to prove it and pull it out of myself.”

While Oklahoma State football coach Mike Gundy doesn’t want to prevent his players from dreaming big, he’s wanting to make sure they understand there is a process to make a push to the College Football Playoffs. And it starts in winning the Big 12 Conference for the first time since 2011.