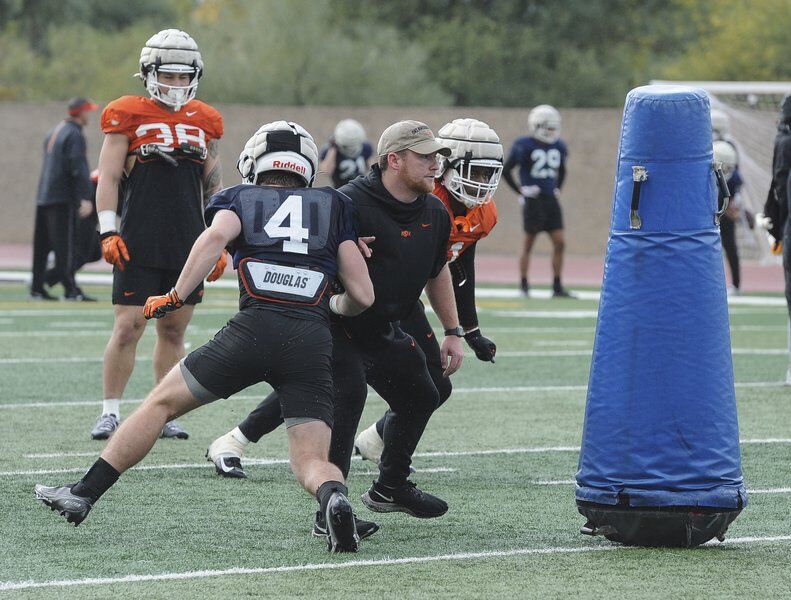 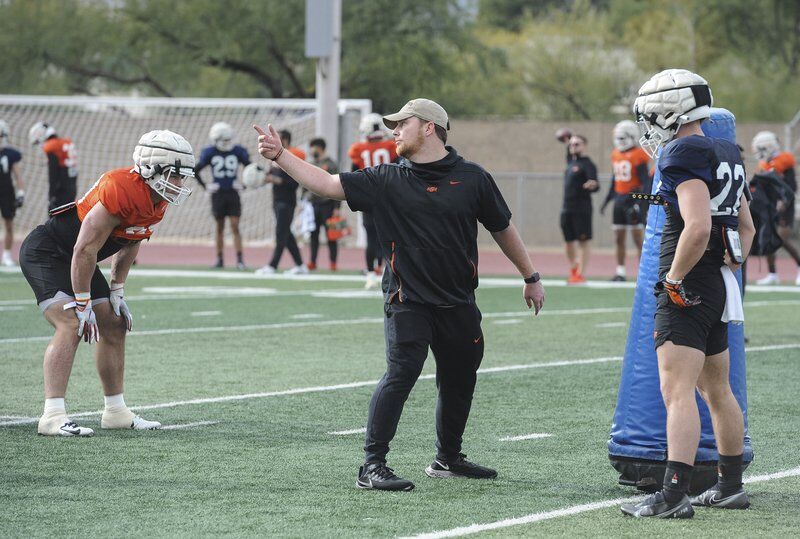 SCOTTSDALE, Ariz. – Jim Knowles left an Oklahoma State defense that loved him, regardless of the position of the players.

However, for the linebackers – of which Knowles was initially also their position coach – his departure may have hit a little bit harder.

Fortunately for them, however, there has been some stability during Fiesta Bowl preparation even without their position coach.

According to Cowboy coach Mike Gundy, Koy McFarland – a defensive graduate assistant – has been running the show for the linebackers, and it hasn’t just been during the past month.

“He's been coaching them all year,” Gundy said prior to the team’s departure for Arizona. “I mean, he coaches them in practice every day and meets with them. Jim (Knowles) doesn't coach a position. Jim is not a position coach (anymore). He's a walk around coordinator.”

That was evident during the team’s practice Tuesday in Scottsdale, Arizona, during the brief portion open to the media.

McFarland was coaching the linebackers with drills and what to watch for on a specific drill, and it wasn’t just the half a dozen blue-jersey practice squad players who traveled with the team – it also was veterans Malcolm Rodriguez and Devin Harper paying close attention to the words being shouted out.

“With a room like us, we have a lot of leaders as well, and a lot of young people,” Harper said. “And I think he set the tempo, and he sets the standard for a linebacker at OSU with being the coach this year.

Coaching is in the blood for McFarland.

His father, Robert McFarland, is a longtime position coach – who got a two-year chance as a head coach at Stephen F. Austin in the mid-2000s. Robert started his coaching career as a graduate assistant in the late '80s, including one year as a GA at Notre Dame – and was the offensive coordinator and offensive line coach for Gene Chizik at Iowa State.

The most recent Division I stop for Robert was a six-year stint as the offensive line coach at Louisiana Tech, where they went to five bowl games, before returning to Copiah-Lincoln Community College in Mississippi.

Now, his son is trying to take a similar path by way of being a graduate assistant.

McFarland played and graduated from University of Arkansas-Monticello, where he was also a graduate assistant working with running backs before joining the Oklahoma State staff.

“He's awesome to be around. He brings the energy every day,” Rodriguez said of Koy. “There's no down days for him. He's always hyped, and he's always running out there at practice. He's always the first one. He's always trying to beat the guys to the next station or something like that. …

“He's been around the system and the coaches and all that. And, his dad was a coach. So it's natural for him, and it's like second nature. So he's just a good coach, and I hope the best for him.”

It is one thing to have the passion of the players you are coaching behind you – which has been a case with many of the different defensive positions this past month, such as defensive end Brock Martin calling for Knowles to receive a “blank check” and then saying Tuesday that defensive line coach Joe Bob Clements would do a “hell of a job” as the defensive coordinator.

But one of the longest tenured defensive coaches on the Oklahoma State staff echoed the sentiment of the veteran linebackers when it came to the capabilities of McFarland.

“I think Koy has done a great job. He's going to be a star in this profession,” Clements said Tuesday. “He's a bright young coach. He has a very bright mind when it comes to football. He was a coach's kid growing up. He's been around the game for a long, long time. I think he's going to have a bright future in this profession.”