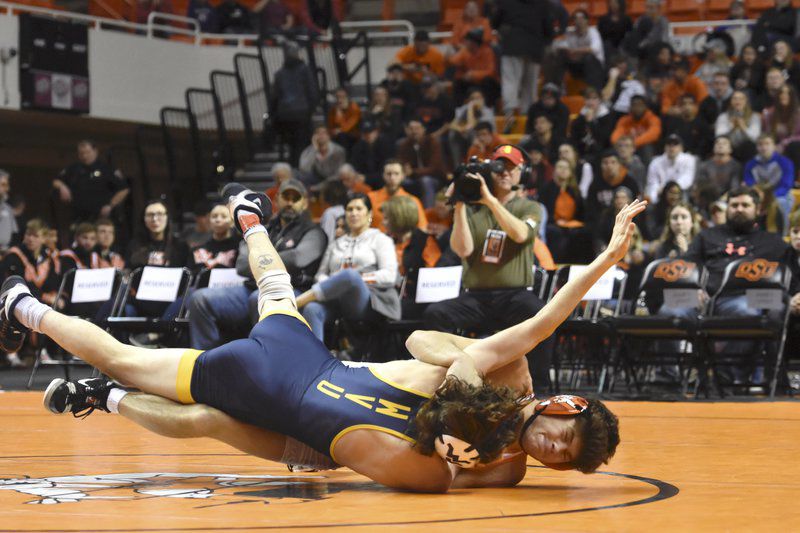 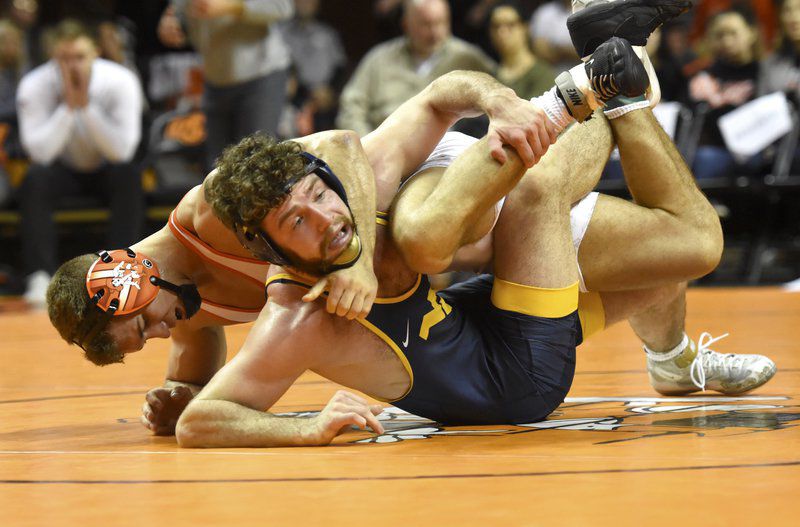 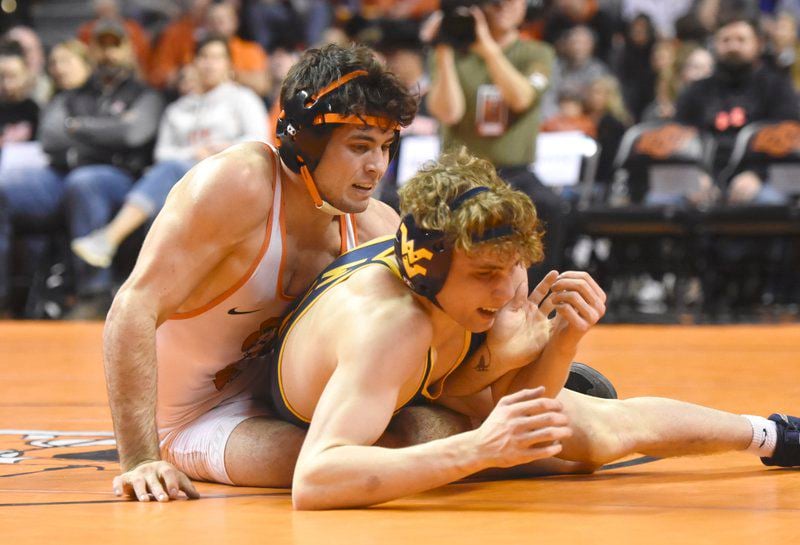 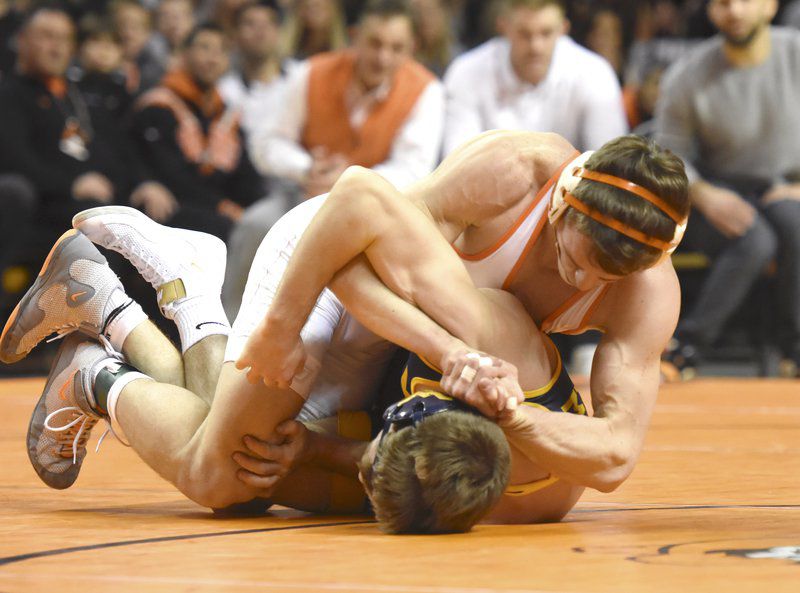 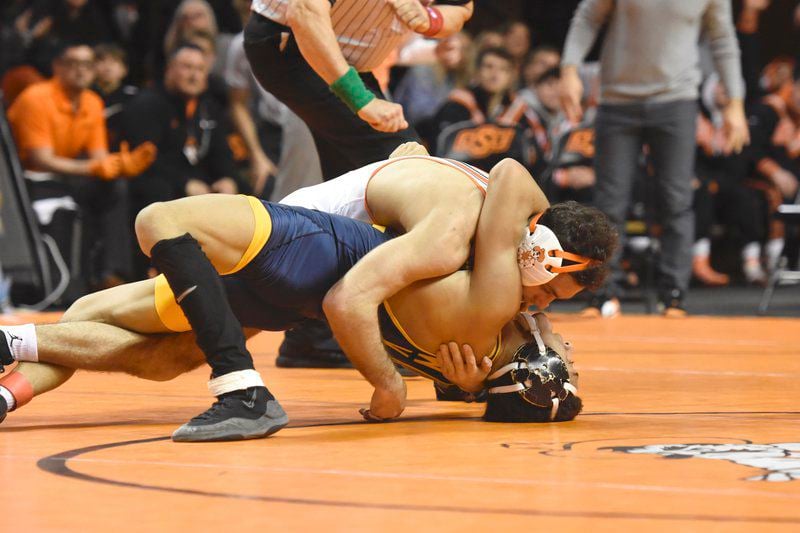 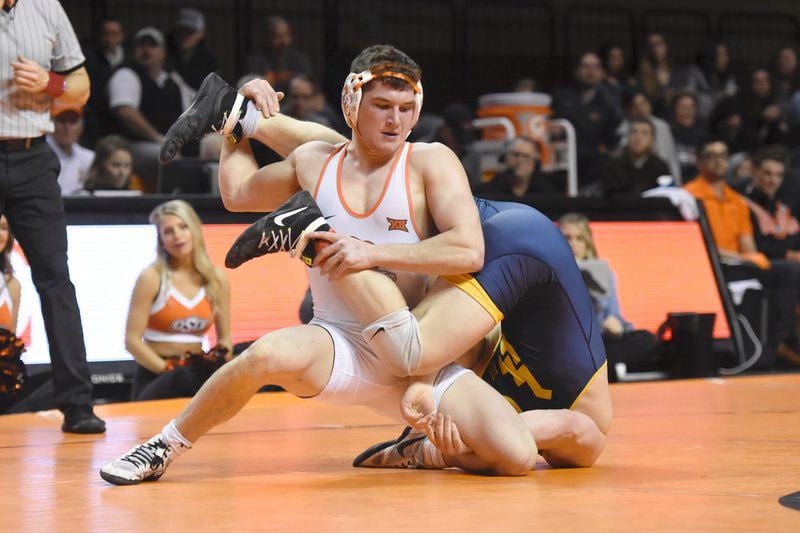 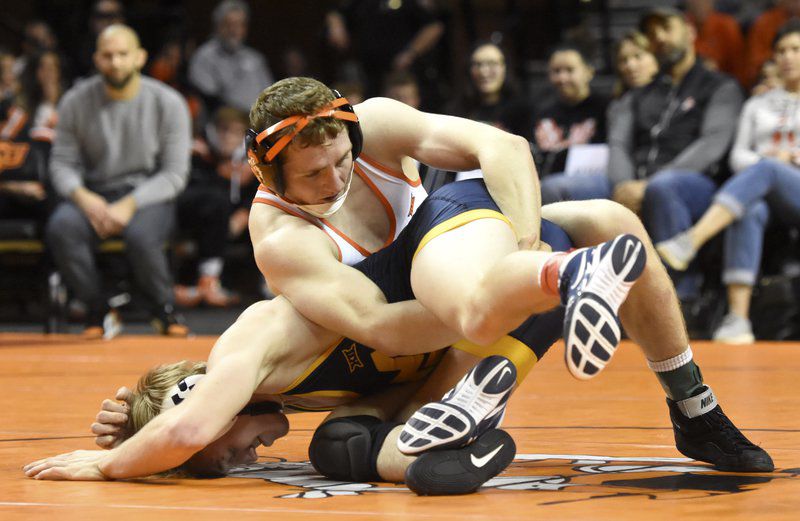 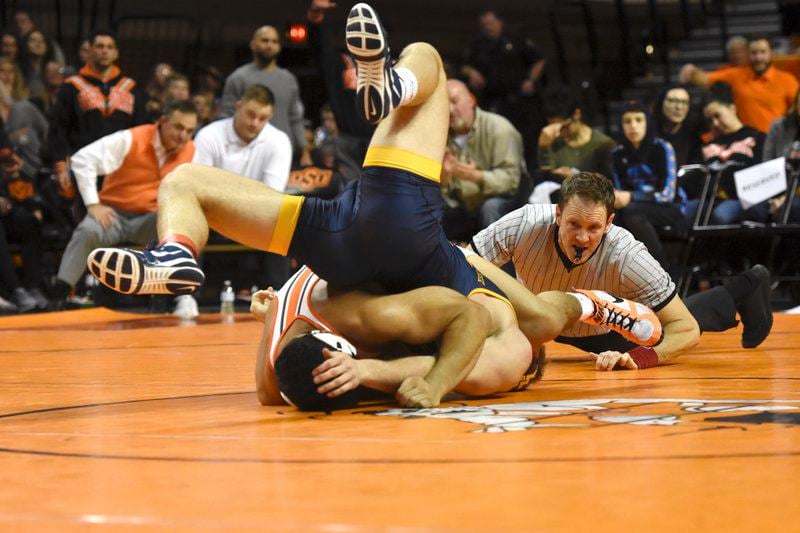 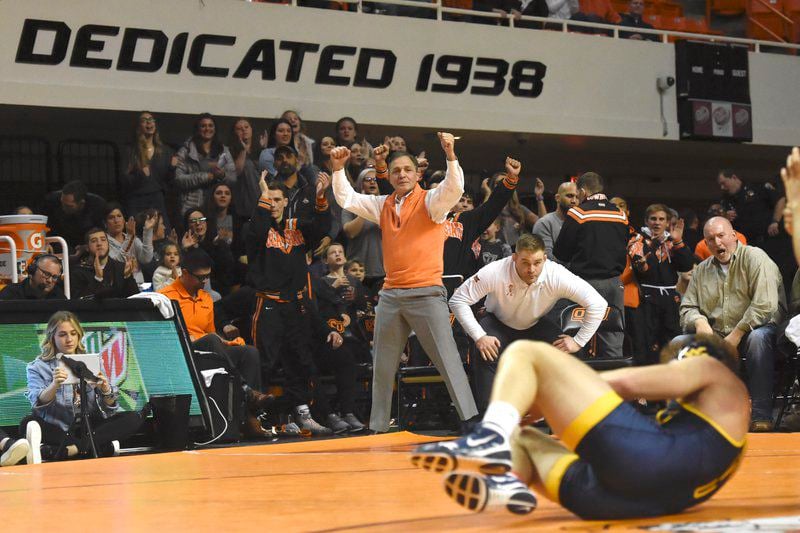 Anthony Montalvo finally got to experience Gallagher-Iba Arena at it’s craziest for a regular season dual – that didn’t feature the likes of Iowa or Penn State.

With No. 10-ranked Oklahoma State’s 37-9 victory over West Virginia well in hand, the Clovis, California, native picked up his first pin inside the historic venue which got the fans out of their seats.

“I’ve always considered myself a ‘pinner,’ I like getting people on their back and finishing the match,” said Montalvo, who had three previous falls this season in the Lehigh dual and at the Southern Scuffle. “It felt good to get it in Gallagher, just because the first two outings weren’t the best, and the past two have been pretty solid.”

It likely wasn’t just the fans inside GIA that jumped to their feet when he reworked his position – nearly getting a pin within the first minute of his match at 184 pounds – before getting the fall with 30 seconds left in the opening frame.

Montalvo told the News Press earlier this week that his family in California typically gathers for parties to watch him wrestle on ESPN+, and Friday would have been no exception.

“‘It’s about time you get a pin in Gallagher-Iba’ that’s probably what I’m going to see when I look at my phone,” Montalvo said. “My dad is going to ‘About damn time, son!’ But it’s all jokes, and he knows that it will make me laugh.

Montalvo’s pin capped the night of scoring for the Cowboys – with Oklahoma State suffering losses at 197 pounds when No. 2-ranked Noah Adams pinned Dakota Geer out of a scramble in just over a minute, and 285-pounder Cornelius Putnam losing in sudden victory in his season debut.

But Oklahoma State opened the night nearly as dominant.

No. 4-ranked Nick Piccininni dispatched of Joey Thomas in quick fashion at 125 pounds. The two-time All-American Cowboy completed a technical fall within the first period, winning 18-0 after getting the takedown and turning Thomas four times.

He needed a little bit longer to get to the points needed, but 30 seconds into the third period – behind four takedowns and two nearfalls – the true freshman from Broken Arrow completed the 17-1 technical fall.

The only victory for Oklahoma State that did not include a bonus point followed the hot start.

Dusty Hone, who is still holding off injured NCAA qualifier Kaden Gfeller (at 149), built up over four minutes of riding time, but was unable to ever turn Caleb Rea in a 7-2 decision.

The first fall of the night came in the following match with No. 3-ranked Boo Lewallen needing just 1 minute, 10 seconds to pin Liam Lusher at 149 pounds.

The Cowboys would follow with three-straight matches decided by major decisions.

Wyatt Sheets captured a 12-0 major decision at 157 pounds, while racking up just under four minutes of riding time.

“There was no intentions to ride that much, it wasn’t something we had focused in on as a team,” Smith said. “It just kind of materialized that way. We seemed to be on top a lot, and did a pretty good job of holding them down and breaking them down.”

Travis Wittlake also spent a lot of time on top in his match at 165 pounds, but that was more out of design.

The No. 9-ranked redshirt freshman pushing the riding time to 4 minutes, 35 seconds – spending 65% of the match on top – by the end of his 12-3 major decision with a flurry of takedowns and releases in the final period to push the score.

“Sometimes you think as a coach that there are areas that you want them to spend some time in during competition,” Smith said. “So maybe with him, you want to see a freshman learning to break people down, learning to hold them down – and more so in critical matches when you take a guy down with 30 seconds left in a period, you’ve got those sills and you’ve got that endurance in your arms to do that.”

At 174 pounds, Andrew Shomers pushed the riding time to nearly 5 minutes in his 11-3 major decision over Scott Joll.

Oklahoma State won’t have long to recover from the Friday night dual, as the Cowboys will turn around in less than 24 hours and face No. 9-ranked Pittsburgh at 7 p.m. Saturday inside Gallagher-Iba Arena.