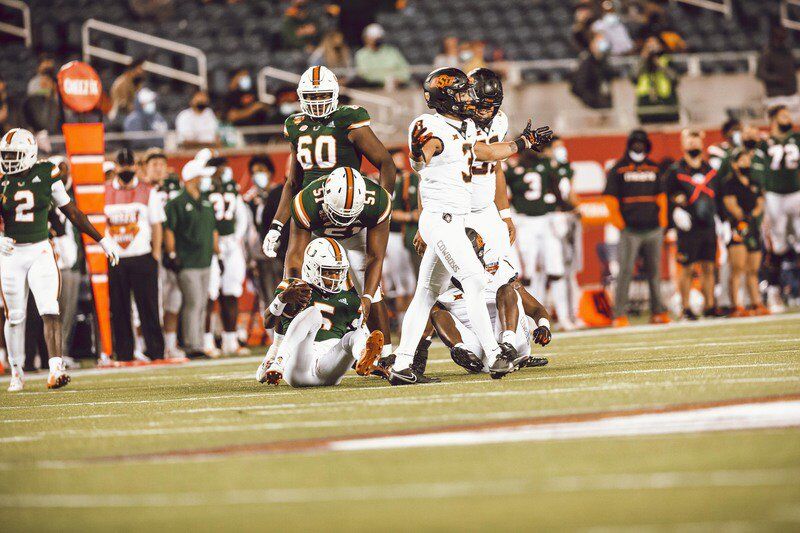 Bruce Waterfield/OSU Athletics Oklahoma State safety Tre Sterling (3) announced after Tuesday’s Cheez-It Bowl that he will be returning to OSU for his final season. 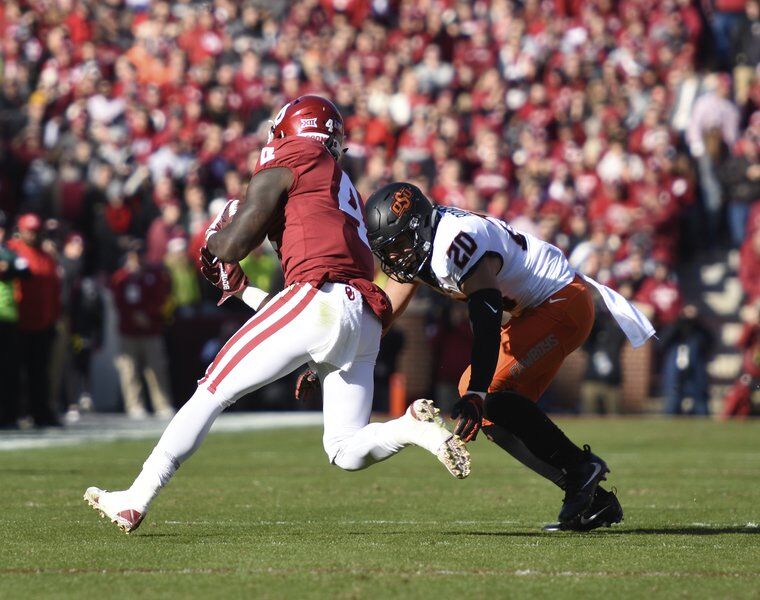 News Press File Photo Oklahoma State’s Malcolm Rodriguez, right, tackles Oklahoma running back Trey Sermon. Rodriguez announced before Tuesday’s game that he was taking advantage of the extra year of eligibility and will be returning to OSU next year.

Bruce Waterfield/OSU Athletics Oklahoma State safety Tre Sterling (3) announced after Tuesday’s Cheez-It Bowl that he will be returning to OSU for his final season.

News Press File Photo Oklahoma State’s Malcolm Rodriguez, right, tackles Oklahoma running back Trey Sermon. Rodriguez announced before Tuesday’s game that he was taking advantage of the extra year of eligibility and will be returning to OSU next year.

A lot of attention has been drawn by Oklahoma State players who either opted out of the bowl game – or didn’t play the second half of the Cheez-It Bowl – along with players electing not to take advantage of the extra year of eligibility granted by the NCAA due to the pandemic.

However, after the Cowboys held off a late rally by Miami to close out the chaotic 2020 season with an 8-3 record, the attention shifted to news of those who were electing to return to Stillwater for the 2021 season.

Prior to the bowl game, Dave Hunziker – the radio voice of Cowboy football – tweeted that senior linebacker Malcolm Rodriguez was going to utilize the extra year, saying, “Malcolm Rodriguez has told us that he will return to Oklahoma State next season.”

The Wagoner native originally arrived at Oklahoma State as a safety for the Cowboys, and was a starter in the defensive backfield his sophomore season. However, he shifted down to the linebacker position at the start of the 2019 season – where he flourished.

By moving to the heart of the defense, Rodriguez led Oklahoma State with 103 tackles and was second on the squad in solo tackles with 60.

In the pandemic-driven season, he once again led the OSU defense – which was a top 40-defense at season’s end – with 57 solo tackles and 82 total tackles. He also had three sacks, five quarterback hurries, three pass breakups, two forced fumbles and one fumble recovery.

“… Thank you to my family, friends and teammates for constant support and love, ya’ll mean everything to me,” Sterling’s tweet read. “And finally to Cowboy country, thank you all for believing in me and all the words of encouragement over the last two years.

“With that being said, I have been discussing my future in this sport and at this university, and have came (sic) to a decision. I will be returning next year to play the 2021 season.”

Back in May, an ESPN story – based on combination of grades by Pro Football Focus and PFF’s wis above average metric – ranked Sterling as the eighth-best returning safety in the country heading into the 2020 season.

Sterling was the second Cowboy in that top-10 list, behind junior safety Kolby Harvell-Peel, who was third on that list.

The status of Harvell-Peel is not yet known, but his draft prospects are already better than those of Sterling.

Some draft projection sites consider Harvell-Peel a mid-round talent, which could always fluctuate with a likely combine invite and pro day workout – if he elects to enter the draft.

After an All-Big 12 First Team season in 2019, in which he had five interceptions and 13 pass breakups, his numbers took a dip in 2020 in large part due to a rash of injuries – an injury having also kept him out of the 2019 bowl game. Though he missed only one start, he was slowed in other contests by the lingering issue, but still finished fourth on the team with 44 total tackles and tied Sterling for the team lead with two interceptions.

Tylan Wallace did make his departure for the NFL official Wednesday with a tweet expressing his feelings for his teammates and the Oklahoma State program.

“Words can’t explain the love I have for this team and organization! I’m happy that I made the decision to come to OSU and create memories that will last forever,” Wallace tweeted. “I will always and forever be a Cowboy.”

Earlier in the day, it was confirmed Wallace had signed with an NFL sports agent, signing with the Kelli Masters Management, with the agent tweeting, “Welcome to the KMM Family (Tylan Wallace)!! The most electrifying receiver in the 2021 NFL Draft! So honored to represent you, Tylan!”