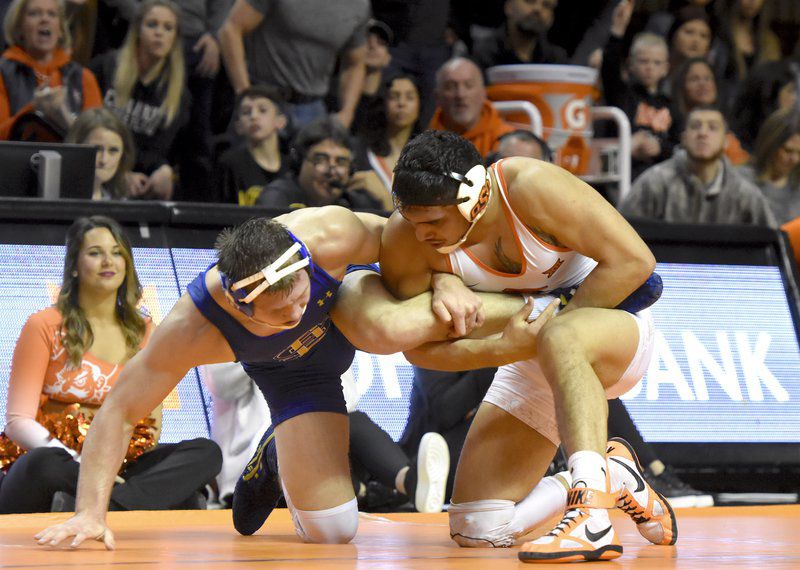 Jimmy Gillispie/Stillwater News Press Oklahoma State's Anthony Montalvo, right, tries to score a nearfall-2 against South Dakota State's No. 14-ranked Zach Carlson during their 184-pound match Friday night in Gallagher-Iba Arena. Montalvo was awarded a nearfall-2 during the final seconds of the third period upon further review, giving him the 3-1 victory. 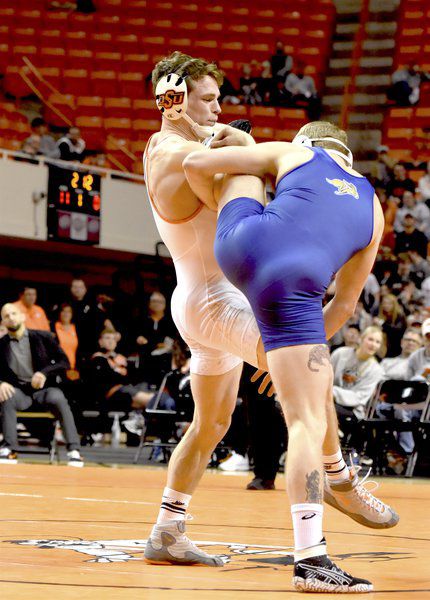 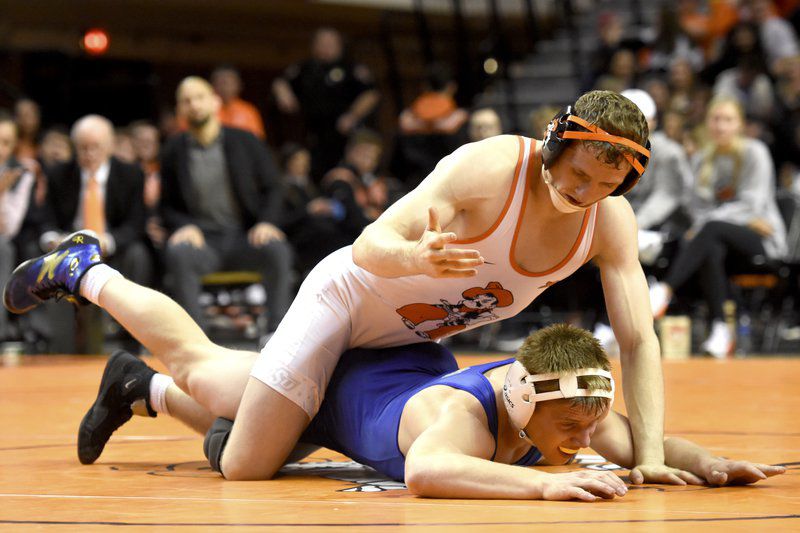 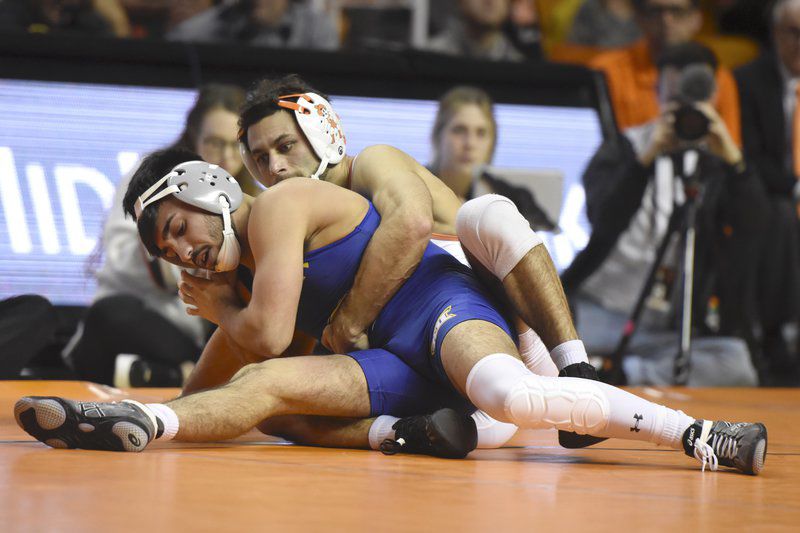 Jimmy Gillispie/Stillwater News Press Oklahoma State's Anthony Montalvo, right, tries to score a nearfall-2 against South Dakota State's No. 14-ranked Zach Carlson during their 184-pound match Friday night in Gallagher-Iba Arena. Montalvo was awarded a nearfall-2 during the final seconds of the third period upon further review, giving him the 3-1 victory.

When John Smith looked down at his score sheet following Friday’s dual against South Dakota State, his eyes couldn’t help but drift to the backend of the matches.

The No. 11-ranked Oklahoma State team found a way to find another gear late in each weight to distance individual matches, and in turn, the dual – with the Cowboys cruising to a 35-3 victory over the Jackrabbits.

“Sometimes things don't go like you want in the first couple of periods, but if you score points in the third period, you're going to win matches,” Smith said. “I think for the most part that was pretty critical at 133 (Reece Witcraft) in a tight match where we ended up with a reversal, a takedown and two nearfall – so six points in the third – that made a difference (with Witcraft winning by 9-4 decision).”

Nearly 50 percent of the 64 offensive points scored by the Oklahoma State wrestlers on Friday came in the closing period of the matches. But when talking with some of the wrestlers, it was how they started matches that they were more concerned about.

The most dramatic – and significant (and possibly questionable) – came from Anthony Montalvo at 184 pounds.

Facing the No. 14-ranked Zach Carlson from South Dakota State, Montalvo looked destined to head to overtime until the officials elected to review a shot by Montalvo on the edge of the mat just as time was expiring.

And after both wrestlers were trying to keep warm for a potential sudden death period, the officials returned to the mat rewarding Montalvo a takedown and his second win over a ranked opponent this month.

“I was really upset with the way I wrestled, but good to see that even on my worst matches, I could beat a guy that's supposed to be ranked above me,” Montalvo said. “I just got him on the legs a lot easier than I assumed and I thought he's gonna be coming a little bit harder. And I just didn’t prepare myself offensively the way I should have. But then to get the takedown and stay in the win column was important to me.”

There was one match in particular where the Cowboys put up big points in the final frame after a slow start.

That also happened to be the marquee matchup between newly-minted No. 1-ranked Boo Lewallen at 149 pounds against No. 11 Henry Pohlmeyer. Lewallen flipped Pohlmeyer from the top position for a pair of four-point nearfalls in the third.

“Boo wrestled well and broke that match open a little bit in the third period,” Smith said. “He was a little bit slow on his feet and little bit conservative early on.”

Smith didn’t use it as an excuse necessarily, but did point out the significance of Lewallen’s opponent.

Pohlmeyer was the wrestler on the mat when the Yukon native suffered a shoulder injury early last season that effectively ended his year – with him re-aggravating it in the spring portion of the schedule in his first match back.

“Last year, that guy ended his season in November, so maybe a little bit just hesitant, a little bit concerned with some of some of what he does,” Smith said. “You got to be careful about wrestling timid, you just wrestle smart and you wrestle hard and you finish hard. But I did like for sure that he broke that match open in the third period.”

Lewallan said after the match he didn’t think about the notion that he was facing the wrestler that ended his season last year. But does understand the need to come out more aggressively.

“Not what I want, that’s how I would assess it,” Lewallan said. “I’d like to score points, right? So got to get a takedown (earlier).”

While he didn’t get a takedown in the match, he did get an important takeaway.

He had two of the three four-point nearfalls among the 60 offensive points scored by the Cowboys – something that forced a smile out of the 23-year-old wrestler.

“I don't think I've had that type of confidence on top my entire career until this year, so it's nice to have it,” Lewallen said. “But like I said, I want to get takedowns.”

Takedowns may be just as difficult to come by in Sunday’s dual, though.

Lewallen will likely face No. 5-ranked Brock Mauller in the 2 p.m. meeting with Missouri in Gallagher-Iba Arena. It will be the first matchup between the two top-5 ranked wrestlers.

For the complete results from Friday’s dual, check the Scoreboard on Page B2.